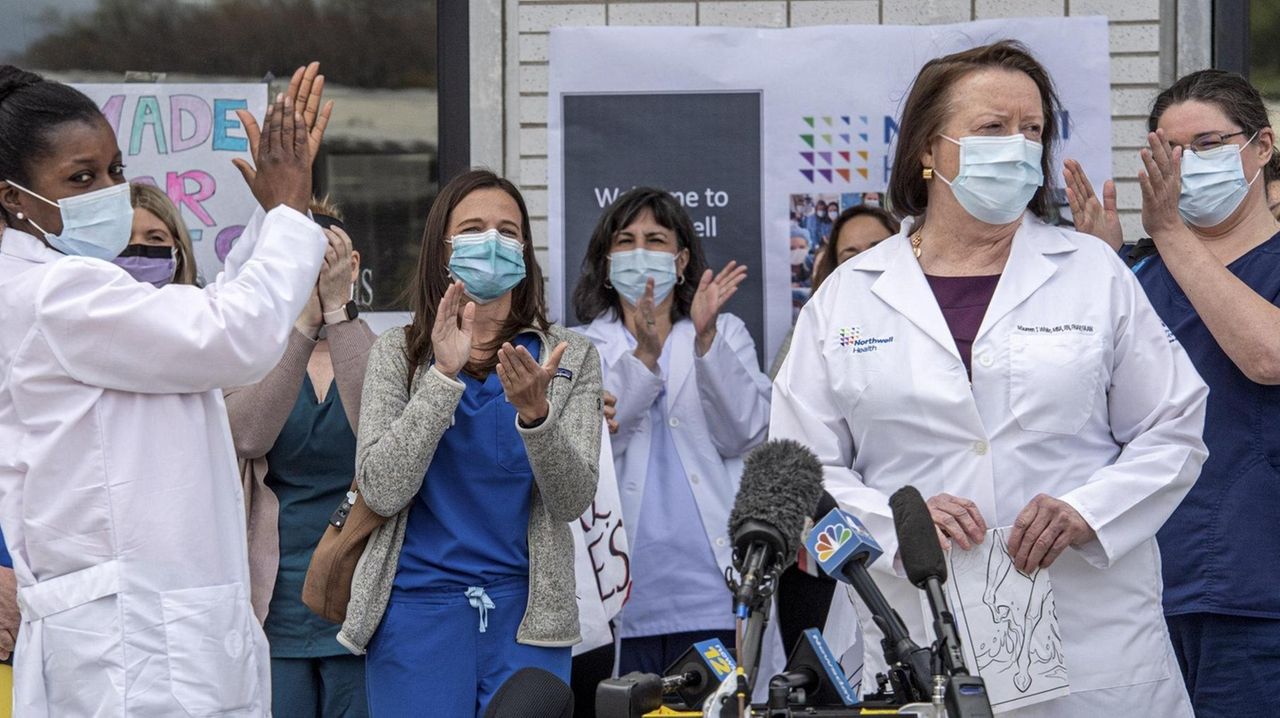 Hospitalizations of coronavirus patients continued to level off in New York on Tuesday, as Gov. Andrew M. Cuomo said the state has probably hit its apex, even though a staggering 778 more people died and calls went out to help people pay to bury their loved ones.

The Metropolitan Transportation Authority announced it will compensate relatives of 59 workers killed by the coronavirus with up to $500,000 each.

Cuomo reported that intubations of COVID-19 patients moved into negative territory for the second straight day, and hospitalizations dropped, by 118 patients, for the first time since the crisis began more than a month ago.

“We think we are at the apex,” Cuomo said at his daily news briefing in Albany. “We are changing the curve [of cases] every day” through stay-at-home and social distancing orders.

New York City issued revised figures in the afternoon, bringing the total in the five boroughs alone to 10,367, as it added 3,778 people who were presumed to be coronavirus victims but had never been tested.

Amid massive unemployment, the devastation has become so dire that two well-known politicians, Sen. Chuck Schumer (D-NY) and Rep. Alexandria Ocasio-Cortez (D-Bronx), held a news conference in the Corona neighborhood of Queens — considered to be the epicenter of the epicenter — to ask the Federal Emergency Management Agency to help people pay for funerals and burials.

Nassau County was not exempt from the grim news Tuesday: The number of deaths from COVID-19 there has passed 1,000, County Executive Laura Curran said. Nassau added 91 fatalities by Monday night, for a total of 1,001.

The county reported 892 new positives, for a total 25,250 people confirmed to have the coronavirus, according to the latest state figures.

Suffolk County tracked 819 new positives, for a new total of 22,462. The virus killed another 40 people in Suffolk between Sunday and Monday, adding up to 608 deaths, state figures show.

COVID-19 has killed 1,609 people on Long Island, with 47,712 having contracted the virus. That is more confirmed cases than Belgium and nearly double the amount in Canada and Brazil.

In Albany, Cuomo spent a large portion of his 47-minute briefing rebutting President Donald Trump’s assertion that he has “total” authority to order states to reopen their economies and schools. "We don’t have a king. We didn’t want a king," Cuomo said, adding that he would abide by any orders from Trump only if they were not “reckless” and did not put the health of New Yorkers in jeopardy.

But Trump later said he’s “not going to pressure” Cuomo and other governors in the region, who said they would be coordinating plans to gradually bring back their states to a new sense of normalcy, while seeking to prevent a resurgence of the virus. 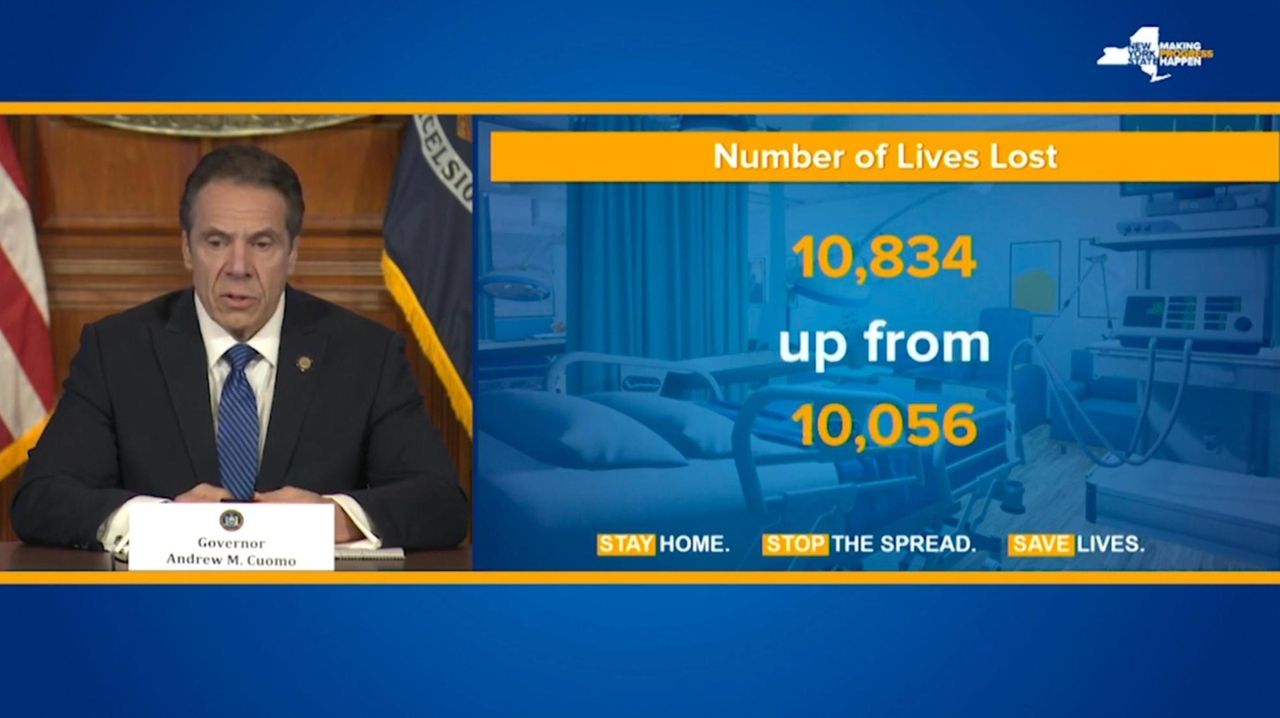 During his daily press briefing Tuesday evening, Trump attacked the World Health Organization for allegedly bungling the pandemic and said he was cutting off U.S. funding for the group. He alleged that their mistakes ”likely caused a 20-fold increase in cases worldwide."

Some signs of progress

Some encouraging news came on Long Island, with the largest health care system reporting its number of COVID-19 patients has dropped.

Northwell Health, which had more than 3,300 patients every day last week, had 3,153 COVID-19 patients as of Tuesday morning, spokesman Terry Lynam said.

"It's encouraging news, and it certainly appears like we are moving downward," Lynam said. 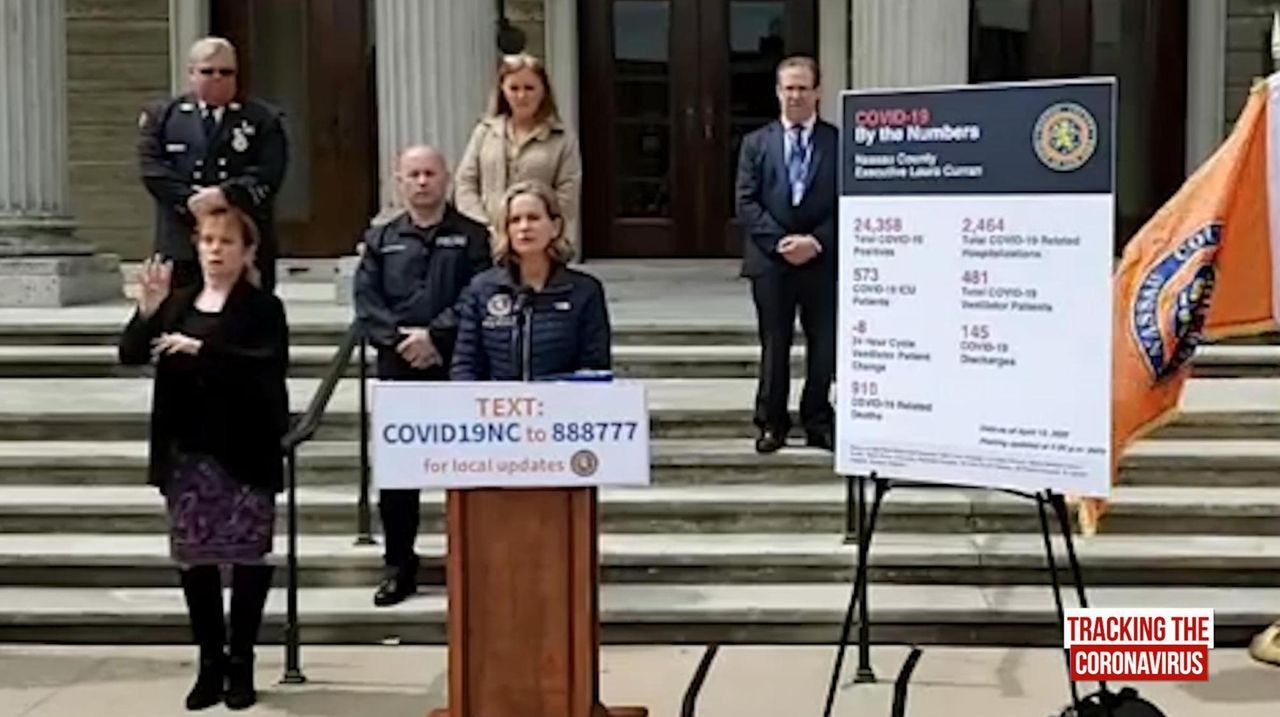 Northwell’s high point for COVID-19 patients was 3,425 patients on April 7.

Nassau County also reported some good news on that front. Countywide, the number of COVID-19 patients rose by eight, Curran said. There were 145 discharges.

"This is good news, we have more discharges, more people walking out of the hospital than coming into the hospital with COVID-19," Curran said.

She also said the number of COVID-19 patients on ventilators dropped by eight, to 481. 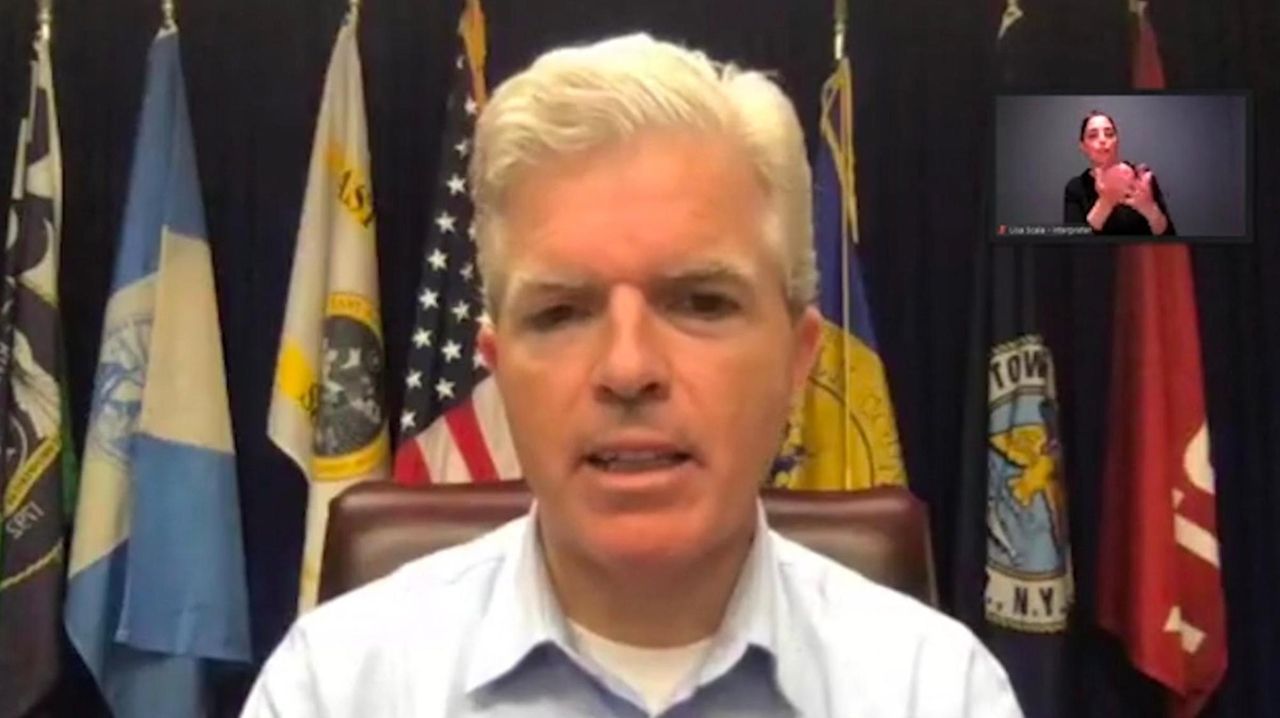 In Suffolk, County Executive Steve Bellone said he, too, was seeing some fragile, promising signs.

The number of ICU patients dropped by eight, and 108 COVID-19 patients were discharged. Hospitalizations did rise slightly, but that followed two days of net decreases.

And the hospital system in the county, while taxed, is meeting the challenge: Some 98 ICU beds are still available.

The numbers are “signs of progress,” Bellone said. If the numbers in the hospital are at a peak, “This is a very high level we would plateau at. Our hospital systems remain under intense pressure and strain.”

But flattening the curve or infections and hospitalizations would be a “good thing,” he said. “We are cautiously optimistic these positive signs will continue.”

Cuomo said state health officials are monitoring the virus' spread to suburban areas outside New York City, including Long Island, to ensure they do not turn into major new hot spots, and he believes they are under control.

Long Island accounts for 22% of coronavirus cases statewide, while New York City has 64% and Westchester and Rockland counties combined for 8%, he said. Upstate accounted for 6%.

He stressed the need for his newly formed coalition of governors from seven Northeast states to come up with a coordinated plan to reopen their states — the plan that has provoked Trump’s ire.

Meanwhile, the MTA's chairman, Patrick Foye, said the benefits package for relatives of those felled by COVID-19 “is a first-in-the-nation agreement that will protect and provide the families of those we have lost with substantial benefits befitting the tragic loss they’ve experienced."

The benefits include three years of health insurance benefits to spouses or dependents under the age of 26. Foye said the agreement, which still must be ratified by the full MTA Board, will be funded through the MTA’s already stressed operating budget.

He would not disclose an estimated cost for the program.

John Samuelsen, international chairman of the Transport Workers Union, which has been critical of the MTA’s efforts in protecting employees from the virus, said the agreement “is a recognition of the incredible contributions and sacrifices our workforce has made.”

Anthony Simon, head of SMART, the Long Island Rail Road’s largest labor organization, called it “a major step in reassuring our workers out there on the front lines that we know the risk they are taking.”

New York as a whole saw an increase of 7,177 new positives for 202,208 confirmed coronavirus cases as of the end of Monday, state data showed.

New York City accounted for more than half those cases, with 110,465 confirmed tests in the five boroughs, and 3,702 new positives since Sunday. The latest state figures — not including the presumed coronavirus cases counted by the city government — also show that 7,905 city residents had died of coronavirus-related causes by the end of Monday.

After that kind of desolation, Curran said the reopening of society will be tricky.

"It's really a balancing act. We have to make sure, when we do begin to strategize on coming back to work, how can our health care system handle it,” she said. "This wonderful metropolitan region of ours, it's like an organism. And we are all connected … So we need to begin to awaken this body again in a very systematic way."

Cuomo also has maintained the reopening will need to be nuanced.

"Everybody's anxious to reopen … People need to get back to work. The state needs an economy. We cannot sustain this for a prolonged period of time," he said. "The worst scenario would be if we did all of this, we got that number down, everybody went to extraordinary means, and then we go to reopen and we reopen too fast or we reopen and there's unanticipated consequences and we see that number go up again."

Cuomo stressed that a huge, fast boost in testing will be critical to reopening society and to avoid a resurgence of the tenacious virus. He called on the scientific community and governments to take on the mission, comparing it to the Apollo space program.

Curran said hospitals in Nassau will be working together to ramp up antibody testing that could allow people to get back to work.

While the number of hospitalizations has hovered around 18,000, there was a net decrease in people hospitalized since Monday, with more people discharged than newly admitted, state figures showed. Intubations, an intervention for critically ill patients in intensive-care units, went down for the third time over the last four days.

“Why it didn’t happen" as forecast? — Cuomo asked. "Because of what we did … We are changing the curve everyday. We have shown that we control the virus, the virus doesn’t control us, and this is a big deal.”

The number of new deaths, considered a lagging indicator in measuring the pandemic's progression, came as the state has hit its worst stretch for COVID-19 fatalities.

It has ranged from 671 to 799 per day for the past week. Cuomo called the latest toll "a devastating level of pain and grief."

One concern, he said, is the rising number of deaths in nursing homes, "because that is the vulnerable population."

In Nassau and Suffolk, a large chunk of COVID-19 deaths — about one-quarter — are occurring in nursing homes, the state said.

The release of that information “is a step in the right direction in terms of letting people know on the community level” the number of deaths, said Richard Mollot of the Long Term Care Community Coalition, an advocacy group for nursing home residents.

In Queens, meanwhile, Schumer, the Senate Minority Leader, and Ocasio-Cortez called on FEMA to grant approval for disaster funeral and burial assistance.

Schumer said with massive unemployment, many New Yorkers cannot afford the expense of burying their loved ones, including the cost of a casket, mortuary services, death certificates and cremation or interment.

“With this crisis, so many people don’t have the ability to give a proper funeral and burial to their loves ones who passed away from this evil illness,” Schumer said. “That is outrageous.”

FEMA passed a similar approval after superstorm Sandy, Schumer said, agreeing to fund burial costs for those who died in the 2012 storm.

Corona, a culturally and ethnically diverse community, has the highest number of coronavirus deaths of any ZIP code in the country, said Ocasio-Cortez, who represents the district.

“People are losing parents and siblings,” she said. “And when it comes to the cost of burial, in New York State a funeral can cost, on average, $11,000 to $13,000 … The least we can do is help families bury their loved ones in the most impacted communities in America.”

FEMA said their request is under review for New York, but that funeral assistance is not currently approved for eligible survivors as part of any COVID Individual Assistance declarations.

On Long Island, Northwell said first responders and front-line health care workers will be given priority access to evaluation, care and testing during the coronavirus crisis at the 52 Northwell urgent care centers across Long Island, New York and Westchester.

Professor: Interns who must do work at hospital put at riskPsychologist Camilo Ortiz at LIU Post in Brookville said most of the 16 students he was supervising work remotely. But three students must report in person.