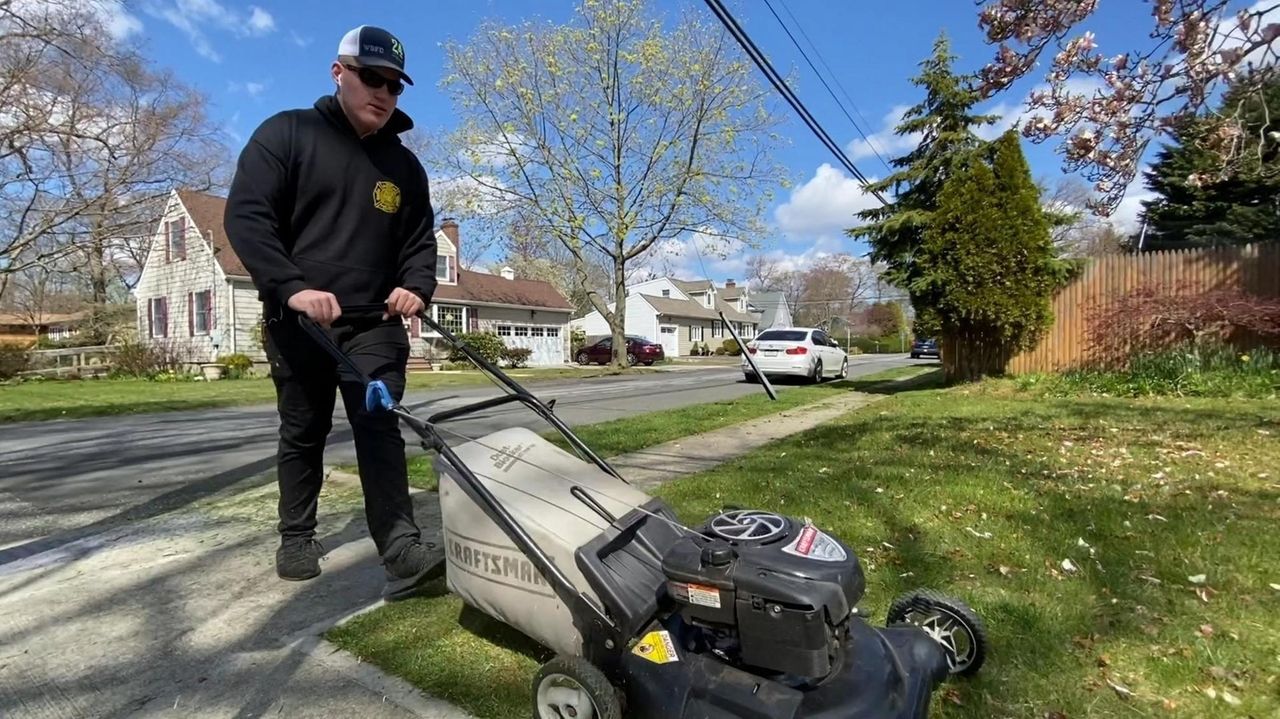 Gov. Andrew M. Cuomo said the state will remain "on pause" until at least May 15. Meanwhile, a West Babylon teen found a way to give back to health care workers. Newsday's Cecilia Dowd has all the information on COVID-19 on Long Island. Credit: Newsday / Yeong-Ung Yang; Howard Schnapp; YouTube / NYGovCuomo; Facebook / Suffolk County Executive Steve Bellone

New York’s coronavirus shutdown of schools and nonessential businesses will be extended for another month until May 15, Gov. Andrew M. Cuomo said Thursday, even as he announced a drop in the daily death count and continued decreases in hospitalizations from COVID-19.

The shutdown, which also ordered residents to stay at home as much as possible, initially was set to expire April 29.

The governor said he made the decision in coordination with governors from neighboring states so the region could have a unified approach to reopening their economies, schools and societies in general. Cuomo made the move in part because "New York Pause is working … That's how we controlled the beast," and he said he doesn't want to lose those gains.

One sign that New York is doing better than expected is that it will send 100 ventilators to New Jersey, he said, after Cuomo's administration had urgently built its stockpile.

Cuomo said he did not know what will happen after May 15. “I don’t want to project beyond that period. One month is a long time,” he said.

He said he will look to data, such as hospital and infection rates, to inform that decision — and will consider the input of public health experts.

“No political decisions, no emotional decisions," Cuomo said. "Data and science. We are talking about human lives here.”

Suffolk County Executive Steve Bellone said people need to stay on course because the hospital system is “very strained” and we “remain in the thick of this.”

Bellone said the reason “we had some success in flattening the curve and helping the hospital system withstand the blow it has taken is because everyone has by and large been following the guidelines put out by health care professionals.”

While he extended "New York Pause," Cuomo also said Thursday that he could envision some activities resuming fairly soon, including professional sports — albeit in stadiums or arenas with no fans at first.

"I don't know why they couldn't be playing now," Cuomo told radio host Sean Hannity, noting that many people on lockdown would enjoy the diversion of teams like the Yankees or Mets.

However, he said it's hard to imagine restaurants or bars opening anytime soon. 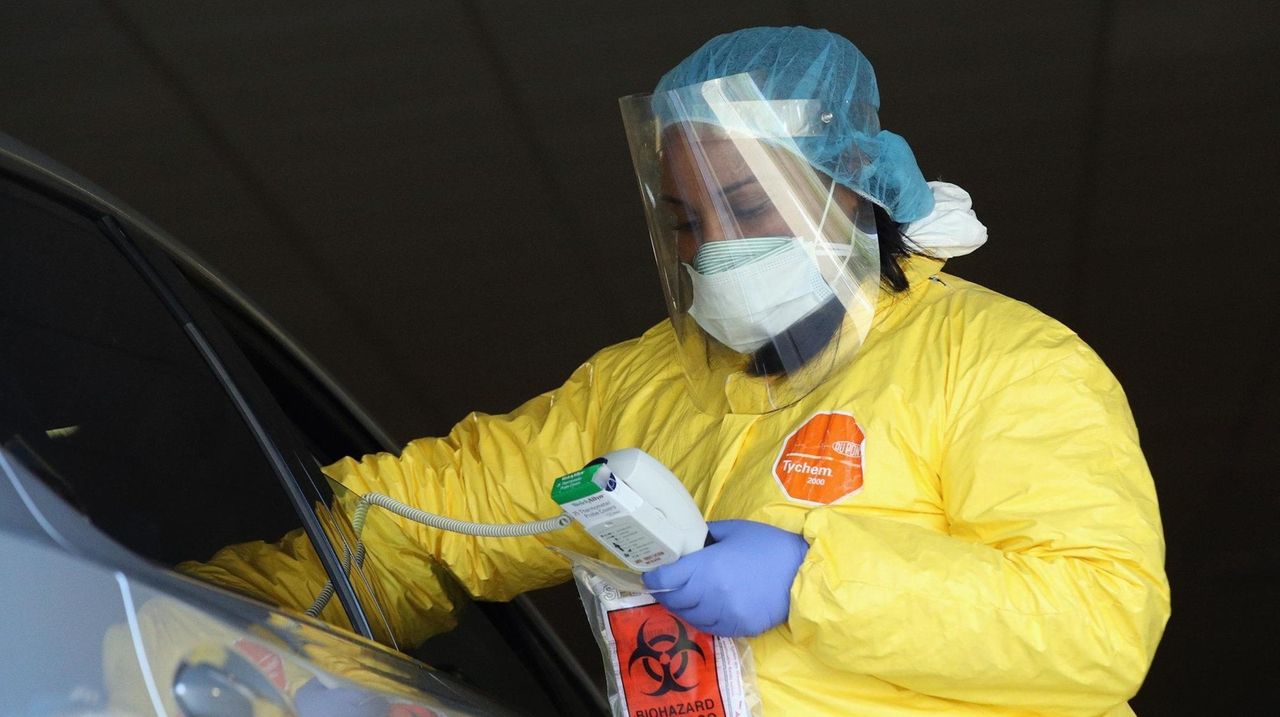 In New York City, a spokeswoman for Mayor Bill de Blasio said all city-permitted street events, including parades and fairs, are canceled for May. Spokeswoman Olivia Lapeyrolerie said the mayor's office would announce later in the week about June events, including the annual Pride, Puerto Rican and Israel parades.

De Blasio said city beaches are unlikely to open this summer as usual — with lifeguards, and crowded with tens of thousands of beachgoers and swimmers. It's possible they would be opened with social-distancing rules in place. "Right now, I'd just say, lower expectations."

The city is not opening municipal pools this summer either, he said.

In Washington, President Donald Trump, who earlier this week boasted he had "total" authority to tell governors when to reopen their economies, on Thursday backed off and said they will be "empowered" to carry out a phased-in effort that will vary from state to state.

"If they choose to remain closed, we will allow them to do that,” Trump said.

At his daily briefing in Albany, Cuomo reported 606 new deaths statewide from COVID-19, the lowest number in 10 days and only the second time in that period the tally has dropped below 700.

Over the past week or so, New York likely has been reaching the apex of the crisis, the governor has said, with hospitalizations and intubations continuing to fall.

New Hyde Park-based Northwell Health said the number of COVID-19 patients in its health care system, the largest in the state, dropped below 3,000 for the first time since April 2, and from a high of 3,425 on April 7.

In Suffolk, hospitalizations, ICU patients and intubations decreased as of Thursday afternoon after fluctuating for the last few days, Bellone said. The decline suggests the county may be hitting a plateau, though he cautioned it is still early to tell.

“It’s always a good sign, a good thing, when you see those numbers go down,” Bellone said.

The economic devastation created by the virus was apparent again Thursday when de Blasio begged the federal government for a bailout — at least $7.5 billion.

"We got nowhere else to turn to get that kind of money," de Blasio told the Fox News Channel's "Bill Hemmer Reports."

Cuomo acknowledged his latest move to combat the coronavirus — a new order for residents 2 years and older to wear face coverings in public — is generating criticism. But he said it will help curb the outbreak and that “the masks work.”

The order to cover nose and mouth when out and about goes into effect Friday at 8 p.m., Cuomo said.

"My phone is ringing off the hook with opposition,” he said.

But “as relatively simple and possibly annoying as it seems, wearing a mask is one of the best things that we can do,” he said. "I do not consider it a major burden and it really is a simple measure that can save lives.”

He clarified that his order extends to public and private transportation systems such as Uber and Lyft, and includes both passengers and drivers.

The federal Centers for Disease Control and Prevention recommends that people wear a cloth covering on the face to help reduce the spread of COVID-19 through droplets when, for instance, an infected person sneezes or coughs.

“People say it is a personal intrusion on them, but again remember it’s not just about you,” Cuomo said. 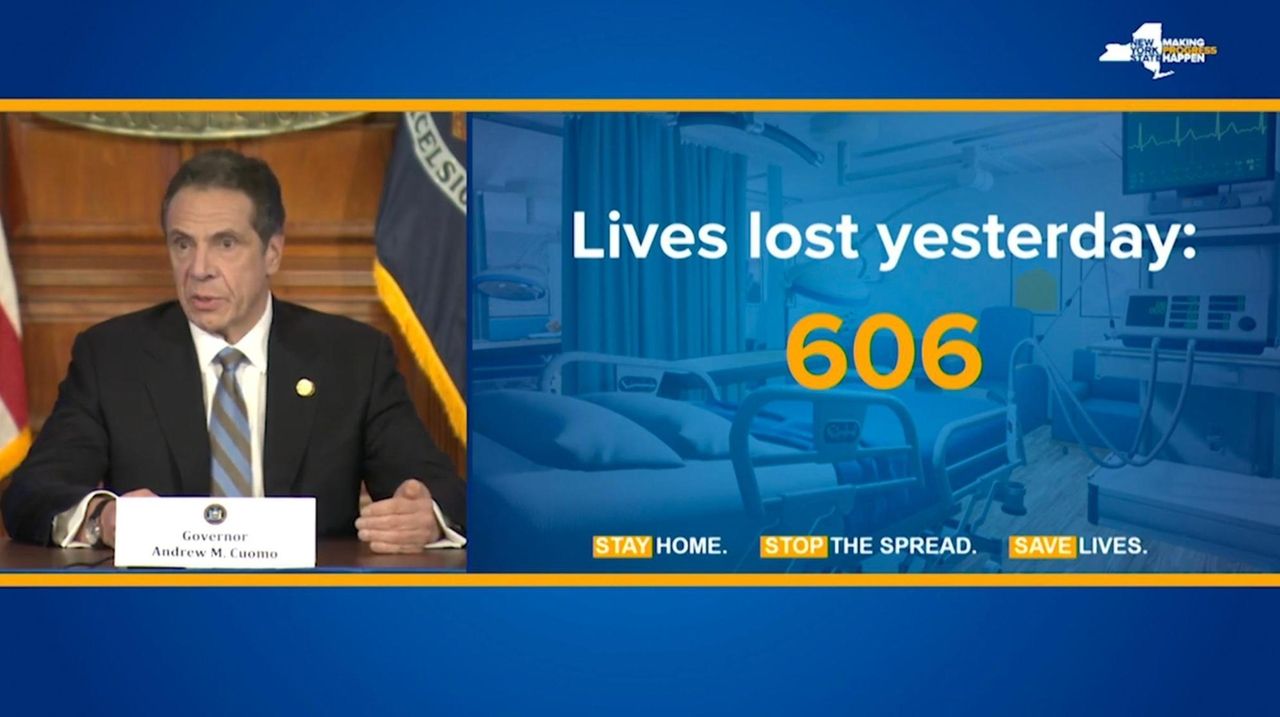 The 100 ventilators New York is sending to New Jersey comes on top of 100 it is shipping to Michigan and 50 to Maryland, which the governor announced Wednesday.

"The wave hasn't crested in New Jersey. They're our neighbors, anything we can do to help, I've told Governor [Phil] Murphy all he has to do is ask," Cuomo said.

In Nassau, County Executive Laura Curran said there continues to be more discharges of COVID-19 patients than new arrivals, and “we’ve had the biggest spread yet, last night.”

There were 2,419 patients, a decrease of 58 from the day before. And there were 235 discharges Wednesday.

“That is a very large spread and we’re very happy to hear that,” Curran said. She said there are 505 COVID-19 patients on ventilators, two more than the day before.

“We stayed home, we did the right thing and we flattened the curve,” she said. "The numbers aren't as bad as were predicted just three weeks ago.”

Bellone said hospitalizations dropped by 45 people over the last day, to 1,585, and ICU patients dropped by 25, to a total of 537. Some 152 COVID-19 patients were discharged.

One of Suffolk's deaths was Ed Keller, a Suffolk transit worker since 2005 who was “one of our best employees,” Bellone said.

“He was respected and liked by everyone he worked with,” Bellone said. “This is a loss for our county.”

Two new testing sites opened Thursday in Wyandanch and North Amityville, hot spots for COVID-19 that have seen some of the highest concentrations of the outbreak on Long Island, Bellone said.

New York State in general saw another day of hospitalizations trending down, intensive care unit admissions decreasing and fewer people needing to be intubated due to severe illness, Cuomo said.

"That rate came down because people changed their behavior," Cuomo said.

While the curve of the disease showed signs of abatement, the economic cost of the pandemic continued to grow worse.

Progressive housing advocates and tenants called for a massive rent strike across the state, beginning May 1, to address the growing number of New Yorkers who have lost their jobs during the pandemic.

“The suffering is real and it’s only going to get worse,” said Winsome Pendergrass, a Brooklyn resident with New York Communities for Change, which is calling on Cuomo to cancel rent for tenants through at least June.

Nearly 2,200 New Yorkers, all based in Queens, Brooklyn and Manhattan, have signed a pledge not to pay rent in May, organizers said Thursday.

The state has issued a freeze on evictions and offered mortgage relief for homeowners, but the freeze only postpones rent payments, which advocates said will be due in full once the crisis is over.

Donnette Leftord of Brooklyn, who owns a small cleaning business and lacks legal immigration status, said there is no way she will be able to afford the back rent on her Flatbush apartment.

Lena Melendez of Washington Heights worries there will be massive evictions and widespread homelessness once the quarantine is lifted.

State and city lawmakers, along with groups such as the Association for a Better Long Island, the Long Island Builders Institute and the Long Island Coalition for the Homeless, earlier this week wrote to the state’s congressional delegation asking for $10 billion in rental assistance.

Efforts are underway on other fronts to help, too.

The United Way of Long Island’s emergency assistance fund for low-wage workers affected by COVID-19 has raised more than $900,000 and helped more than 2,000 people, the nonprofit organization said Thursday.

The latest state figures underscored why the help is desperately needed.

Long Island's count of confirmed coronavirus cases increased to 51,954, with 1,961 new positives reported Thursday, and 1,802 total deaths linked to COVID-19 since the pandemic struck the region.

The number of people hospitalized across the state for illness related to the COVID-19 virus fell below 18,000 Wednesday for the first time in about a week, according to the latest state figures.

Even so, the 606 people who died of coronavirus Wednesday, though down from 752 the day before, accentuated a human toll that persists "at a really tragic, tragic rate,” Cuomo said.

Of those, 577 people died in hospitals and 29 in nursing homes, which he said are facilities that the state continues to watch since they have become a "ground zero" for the disease.

Cuomo said New York will continue to work with other state governments to gradually bring the economy back to a "new normal."

Businesses will be expected "to re-imagine" their workplaces as they reopen, considering practices such as working from home, social distancing and safe interactions with the public.

“This is going to be a moment of transformation for society,” he said.

Cuomo said massive testing — and tracing of contacts of people with the virus — will be critical to reopening successfully.

“How do we unpause New York? First, do no harm. Don’t let that infection rate go up to the best of your ability, don’t lose the progress that we’ve made.”

Many New Yorkers doubt the economic recovery will come any time soon.

A poll of upstate CEOs found 58% said they expect it will take longer than six months for the economy to return the way it was before the COVID-19 virus hit.

The Siena College Research Institute poll released Thursday found 40% of the chief executive officers had laid off workers and 58% cut back on buying equipment, all of which places a substantial drag on the economic recovery.