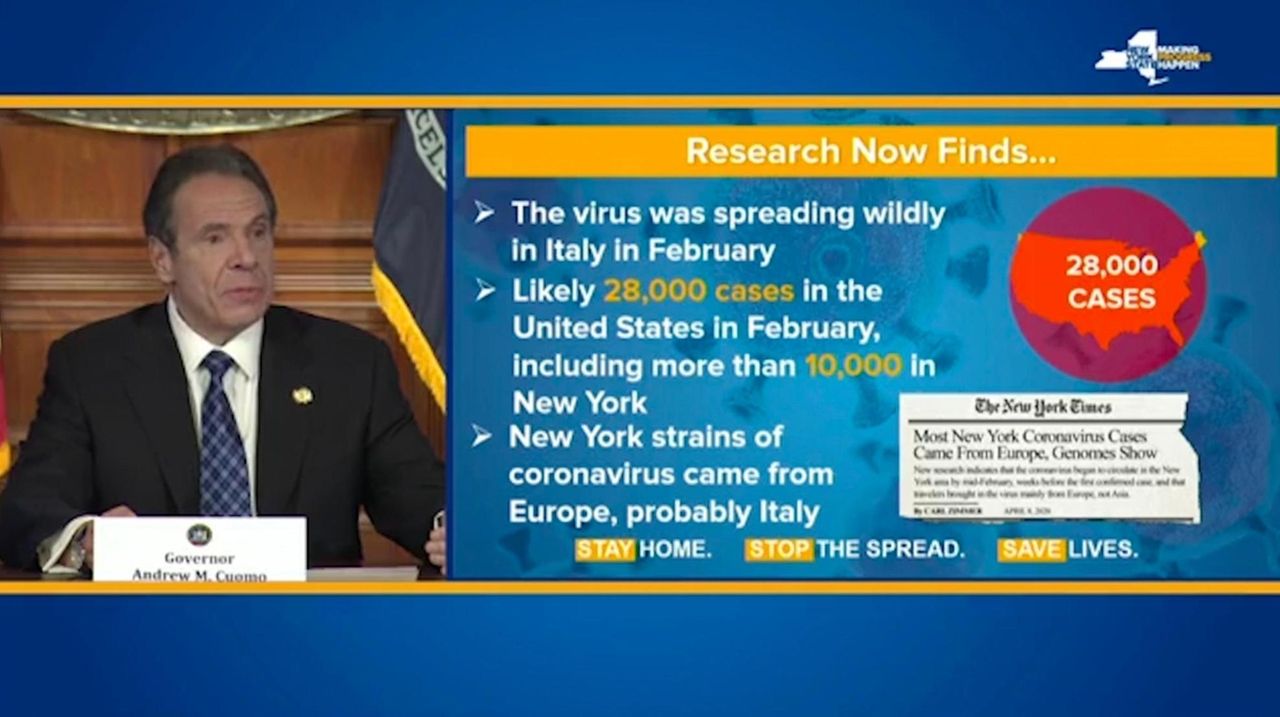 Gov. Andrew M. Cuomo said Friday that research shows New York could have had as many as 10,000 cases of people infected with the coronavirus in February, even though the first positive case was recorded on March 1. Credit: NY Governor's Office

This story was reported by Alfonso A. Castillo, Matthew Chayes, Candice Ferrette, Joan Gralla, David Olson, David Reich-Hale and Craig Schneider. It was written by Olson.

New York Gov. Andrew M. Cuomo said he would likely decide next week whether to keep schools closed for the remainder of the school year, as he voiced concerns about the resilience of the coronavirus.

The state continued to see progress with a falling number of hospitalizations due to coronavirus, but Cuomo said it's "troubling" that nearly 1,300 people are newly hospitalized with COVID-19 every day, and that 1,200 to 1,300 New Yorkers continue to get infected with the virus daily.

Forty-seven of those additional deaths were from Nassau County and 34 from Suffolk, bringing the confirmed number of Long Islanders who have died from COVID-19 to 2,511.

The Long Island Rail Road on Friday announced the first death of one of its employees because of COVID-19: station appearance maintainer James Houlihan.

The governor cautioned about the continued threat represented by the virus, and about reopening the economy too soon.

He displayed a graph showing a sharp spike in new infections in the summer if reopening occurs too soon, to a higher point than the recent peak.

“This is a remarkably effective virus at spreading and growing," he said. "So I know everyone’s impatient: Let’s just reopen. That’s what happens if we just reopen. So we have to be smart.”

Cuomo said a decision on whether to leave schools closed until the end of the academic year will be made in “about one week, so we give people some notice.”

Asked whether he was considering a rent freeze, as the May 1 due date for many renters' payments approaches, and whether he may extend mortgages so homeowners aren't buffeted with a huge payment once the current moratorium expires, Cuomo said, "We’re looking at that right now. … We’re looking at all options.”

On March 19, Cuomo declared a 90-day relief period, waiving mortgage payments based on financial hardship, for people not working or working part time as a result of COVID-19 measures.

Attorney General Letitia James on Friday said she wrote to 35 major New York mortgage servicers asking for a three-month forbearance — which prevents foreclosure — if a mortgage payment is missed, to allow homeowners to renew the forbearance for up to a year if the financial hardship is related to COVID-19, and to waive late fees.

Melissa DeRosa, the secretary to the governor, clarified that any rent action would exclude New York City, which has its own rent board that will decide whether to accede to Mayor Bill de Blasio's call for a rent freeze.

The governor said polls for the June 23 primary election would remain open, but he would issue an executive order requiring the state Board of Elections to send a postage-paid absentee ballot application to all state residents. Cuomo had issued an executive order allowing all New Yorkers to vote absentee.

Not bailing out New York

Cuomo again slammed remarks by Senate Majority Leader Mitch McConnell (R-Ky.) that, instead of receiving federal assistance to mitigate the financial hit caused by COVID-19, states should be allowed to declare bankruptcy.

He said a new law would be required to allow a state to declare bankruptcy, and he dared McConnell to pass it, adding that New York would not resort to such a step, even if it had the option. He criticized McConnell's opposition to what the majority leader called a "blue-state bailout," pointing out that New York contributes far more money to the U.S. Treasury than it gets back, and Kentucky takes more out.

“You’re not bailing out New York," he said. "New York has bailed you out every year."

There were an additional 641 confirmed cases in Nassau, bringing its total to 32,765.

Hospitalizations in Nassau have fallen by 700 — to 1,778 — since the apex 10 days ago, and the number of patients in intensive care continues to drop, Nassau Executive Laura Curran said.

“Our hospitals have handled the surge so well,” Curran said. “Of course we’re not done yet.”

In Suffolk, the number of people hospitalized and in intensive care ticked down as well, Suffolk Executive Steve Bellone said. The hospitalization number fell by 22, to 1,318, and the number of ICU patients decreased by 16, to 478.

The number of county residents who tested positive for the virus increased by 1,039, "Higher than we have been seeing in the last week," Bellone said. The total number of positive test results stands at 30,606, according to state data.

Northwell said it had 2,186 COVID-19 patients at the 19 hospitals it owns and operates, which include 11 on Long Island. That's 149 fewer patients than Thursday and down about 33% from the height on April 10.

Bellone thanked the state and federal government for the delivery of 500,000 facemasks to the county. The cloth, nonmedical face coverings will be distributed to senior citizens in the county through meal programs, food banks and other methods, he said.

Commenting on the death of the commuter railroad's employee, LIRR president Phillip Eng said Houlihan had worked for the LIRR for nearly 20 years and was most recently stationed in the LIRR’s Mid-Suffolk Yard in Ronkonkoma. “We are mourning this heartbreaking loss,” Eng said.

NYC indicators in the right direction

In New York City, the three goalpost indicators used to determine whether to loosen the shutdown rules — new hospital admissions, patients in intensive care and new coronavirus cases — are on the decline, de Blasio said Friday.

It’s one of the first times since the coronavirus crisis began in March that all three measures have declined on the same day, which de Blasio called "just plain good news."

New hospital admissions for the coronavirus were down to 176 as of Wednesday, the latest date for which information is available. That is a drop from 227 the day before.

The number of patients in intensive care in the city's 11 public hospitals was down to 786, from 796. The percentage of those who tested positive for the virus citywide was down to 30%, from 32%, de Blasio said.

Once these indicators decline for 10 to 14 days and the first set of stores and businesses are allowed to reopen, de Blasio said, social distancing rules would need to be observed at those sites. The city would also encourage employers to allow working remotely, de Blasio said.

Also Friday, the five members of Congress who represent Long Island issued statements calling on banks and federal agencies to focus more on the least large small businesses in distributing loans. They said a disproportionate amount of loans have gone to businesses seeking more than $150,000.

In other measures, beaches and pools in New York parks will remain closed through May 31, instead of opening before Memorial Day, the parks agency announced Friday. The closure had been through May 15. Parks remain open for walking, jogging and other activities.