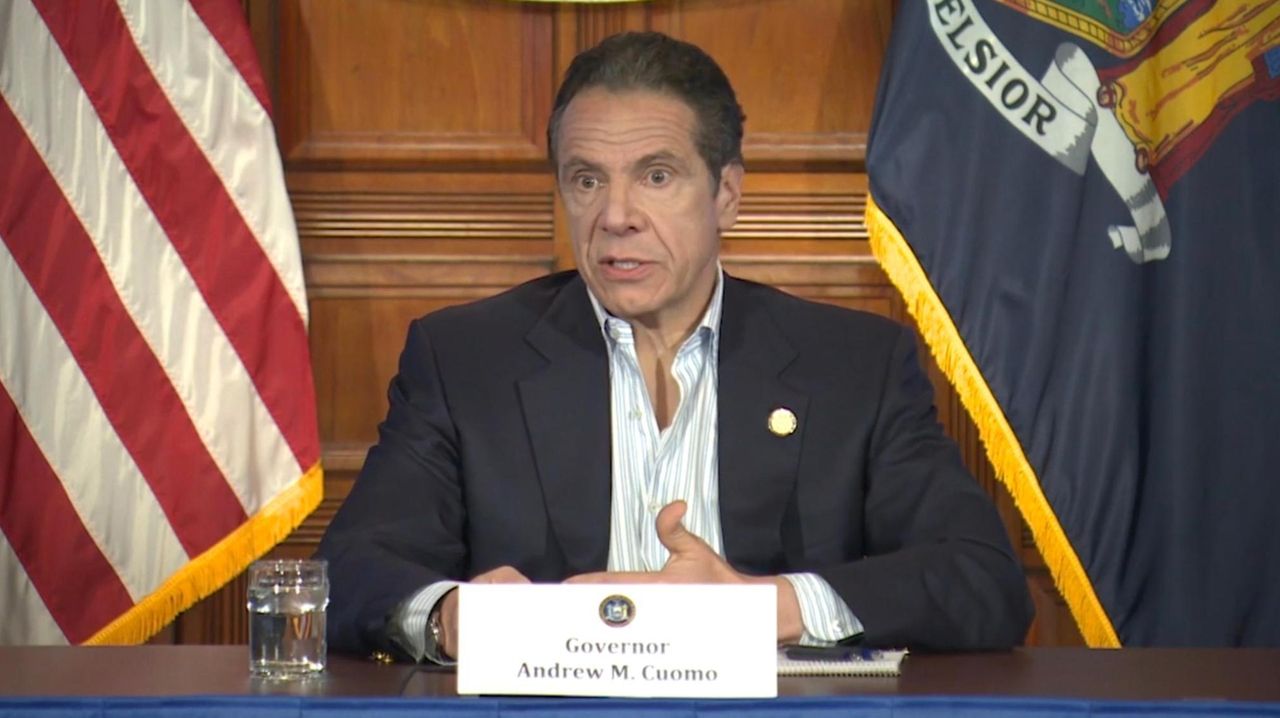 This story was reported by John Asbury, Matthew Chayes, David Olson, David Reich-Hale, Craig Schneider and David M. Schwartz. It was written by Olson and supplemented with an AP report.

Essential workers such as grocery store and public-transport employees will now be eligible for coronavirus testing, and they’ll be able to get tested at local pharmacies, Gov. Andrew M. Cuomo announced Saturday.

Citing continued drops in COVID-19 hospitalizations, the governor said “all the evidence says we’re on a decline,” but he noted a slight increase in deaths statewide on Friday, to 437 from 422 on Thursday.

“This is just terrible, terrible, horrific news,” he said.

Despite the one-day increase, the number of COVID-19 fatalities has been on a downward trend. There were 507 deaths on April 18, and more than 700 deaths on some days earlier in the month. Statewide, 16,599 people have died.

“These people have been carrying the load, and they have been subjected to the public all during this crisis, and because they’re public-facing, these are the people who you interact with,” Cuomo said.

Testing them protects the public as a whole, he said.

“If they’re infected they could possibly spread it to a large number of people,” he said. “So we’re dramatically increasing the capacity with these groups.”

Cuomo said the move comes as labs across the state have increased their capacity to analyze test samples. Until now, the testing focus has been on people with COVID-19 symptoms or those who have been in close physical contact with someone who tested positive — although even people with symptoms have said they’ve been rejected for testing. In addition, many people who carry the virus never show symptoms.

“The more testing [in labs] we have, the more we will open eligibility,” he said. “Hopefully one day we get to the point where anybody who wants a test can walk in and get a test.”

Cuomo said he will sign an executive order allowing the more than 5,000 independent pharmacies statewide to test for the coronavirus.

The governor also announced more testing for antibodies to the virus. Antibodies indicate whether someone has been infected with the coronavirus, even if they no longer carry the virus itself.

Some scientists believe that antibodies will protect someone who has carried the coronavirus from becoming infected again. But the World Health Organization on Friday said that's not certain.

"No study has evaluated whether the presence of antibodies to SARS-CoV-2 confers immunity to subsequent infection by this virus in humans," the WHO scientific brief said.

The governor said hopeful signs continue, including a drop in new hospitalizations to more than 1,100 on Friday.

“Only in this crazy reality would 1,100 new cases be relatively good news,” he said.

Yet that’s far lower than earlier this month, when there were more than 3,000 new hospitalizations some days.

Dramatic expansion of testing With the coronavirus past the apex in New York, the need for an increase in testing has become a top priority. Newsday's Pat Dolan has the story. Credit: Newsday staff

Nassau County had its 11th straight day of declining hospitalizations, Executive Laura Curran announced Saturday afternoon. The number of hospitalized patients fell by 119, to 1,659 people, she said. The number of intensive-care patients, and those on ventilators, also continues to fall, she said.

But, in announcing another 40 coronavirus-related deaths of Nassau residents, bringing the total to 1,558, Curran said, “Not a day goes by I don’t hear about a family member of a friend or an acquaintance of a colleague who is succumbing to COVID-19." 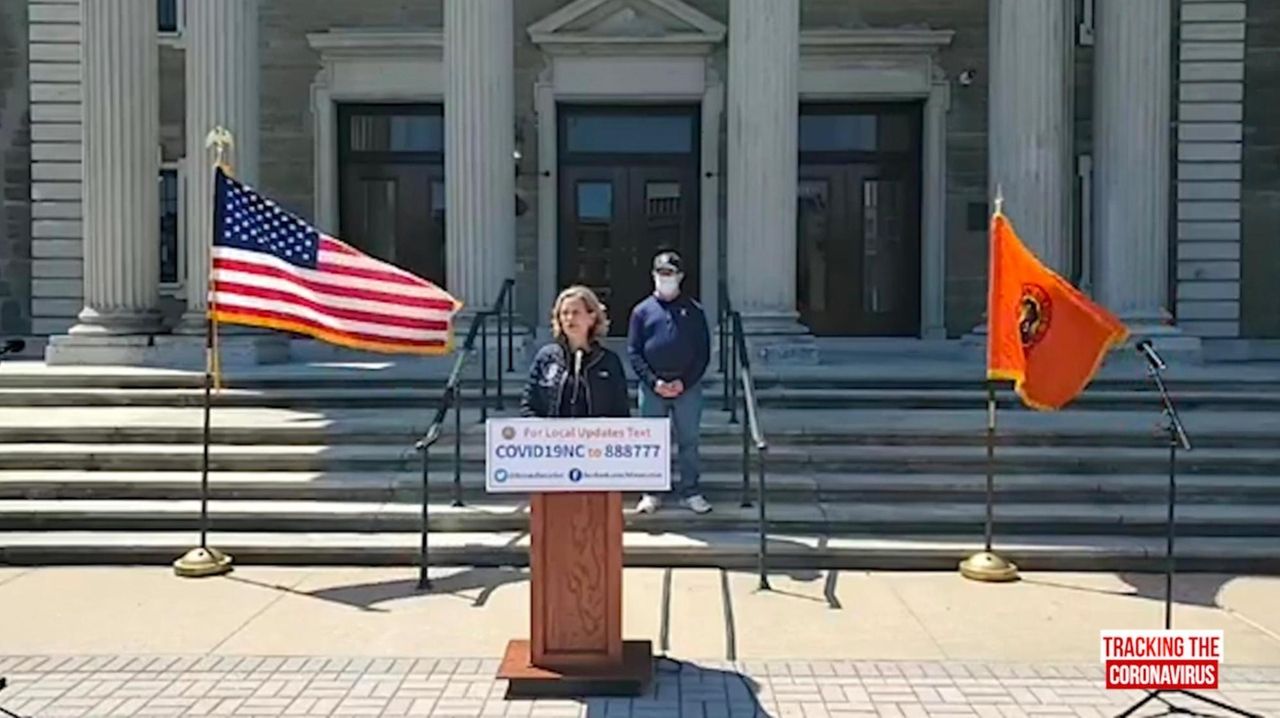 But, as in Nassau and statewide, the number of hospitalizations in Suffolk fell in the past day, by 143, to 1,175, a "huge" drop, he said, compared with the decline of roughly 26 patients a day for the past two weeks.

“Seeing that jump today is great news,” Bellone said. “For today, at least, we can be very happy."

The number of people in intensive care also fell, he said.

Northwell Health on Saturday said the number of COVID-19 patients at the 19 hospitals it owns and operates fell to 2,067, which represents a drop of 21% over the last five days. 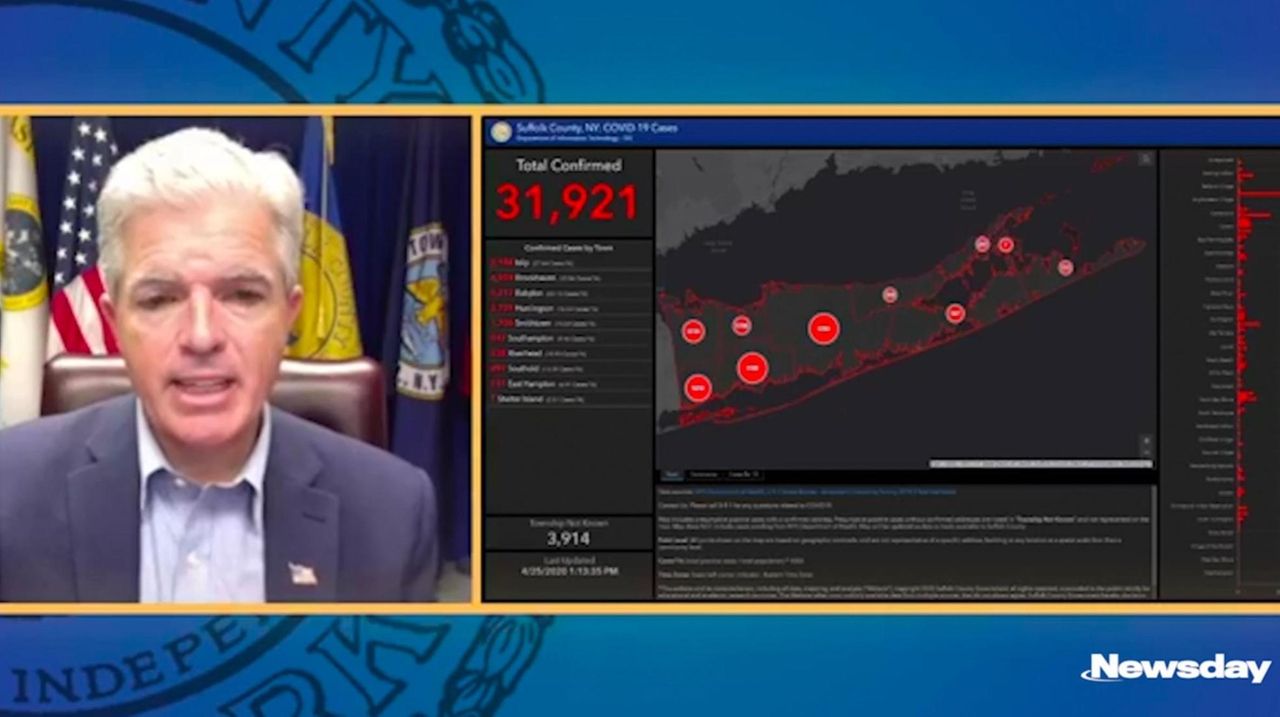 Saturday was the second straight day Northwell reported a drop of more than 100 patients. Yet about 28% of Northwell’s COVID-19 patients were on ventilators.

The number of serious cases of COVID-19 would have been far higher if New Yorkers had not stayed home, practiced social distancing and taken other actions that have limited the spread of the virus, Cuomo said.

The governor said he realizes that New Yorkers are “feeling stress on a number of levels” and said even one of his daughters — he wouldn’t identify who — told him, “I can’t do this anymore.”

But, he said, “What you’re doing is actually saving lives. That’s not rhetorical. That’s not overly dramatic. You are saving lives…. For me that is a heck of an accomplishment, and one to feel good about, and one which New Yorkers will be proud of.”

Even so, New Yorkers continue to become infected with the virus, the governor said. State Health Commissioner Dr. Howard Zucker said there currently is no data on how many people are contracting the coronavirus in workplaces, through family members or through other means. But he said planned contact tracing — in which investigators interview people who test positive about whom they had recently been in close contact with — would help determine how people are exposed to the virus.

The New York City health department Saturday afternoon reported that 150,576 people had tested positive for the virus, and 10,961 people with a confirmed coronavirus case had died. Another 5,309 people considered probable coronavirus cases also had died.

Curran announced Nassau is expanding testing in Hempstead and Freeport and next week will open a testing site in Elmont. For an appointment, call 516-396-7500.

“My team and I are very hard at work on expanding all testing,” Curran said. “Appointments are available if you’re feeling symptoms. The point in expanding beyond Jones Beach and regular doctor’s offices is putting them in more community clinics to make sure we’re testing in the hardest-hit communities. We see in African American and Latino communities increased complications and more fatalities per capita.”

State officials continue to discuss a framework for slowly reopening parts of the state’s economy. Cuomo said any reopening would be phased in, based on the type of industry and venue and other factors.

Melissa DeRosa, the secretary to the governor, said there also are conversations with officials from nearby states, “to try to come to a consensus on principles,” so one state doesn’t undermine another’s progress in controlling the spread of the virus.

But, she said, “there is an acknowledgment within the states that everyone is going to be on their own timeline.”

The 350-bed facility has the highest number of reported COVID-19 deaths of any Long Island nursing home.

Six more residents died since a letter was posted on the home’s website Tuesday, and 20 have died since April 17.

“Our staff continues to deeply mourn the loss of our residents,” states the Friday letter, which was sent under the names of five top officials of the home, including executive director Fred Sganga. “We honor the families and the suffering they have endured during these tragic times.”

Bellone said Saturday that he visited the new temporary hospital built over the past few weeks at Stony Brook University.

The U.S. Army Corps of Engineers oversaw construction of field hospitals at Stony Brook and SUNY Old Westbury amid projections last month that tens of thousands more hospital beds would be needed statewide to handle the surge in COVID-19 patients. The worst-case scenarios did not come to pass, and state officials said the temporary hospitals will remain empty for now, but will be ready in case there is a second wave of cases.

“When you prepare for battle, you do things and build things you hope you never have to use,” Bellone said.

State officials credit widespread compliance with social-distancing guidelines with reducing the spread of the virus enough that the hospitals have not yet been needed.

“Those empty rooms are something we can take some pride in and celebrate,” Bellone said.

In other coronavirus news Saturday:

Gov. Andrew M. Cuomo announced Saturday that health care employees, first responders and other workers deemed essential by the state are now eligible for testing for the coronavirus, whether they have COVID-19 symptoms or not. He also said he will allow more than 5,000 pharmacies statewide to conduct tests.

Field investigators/regulators for health and safety