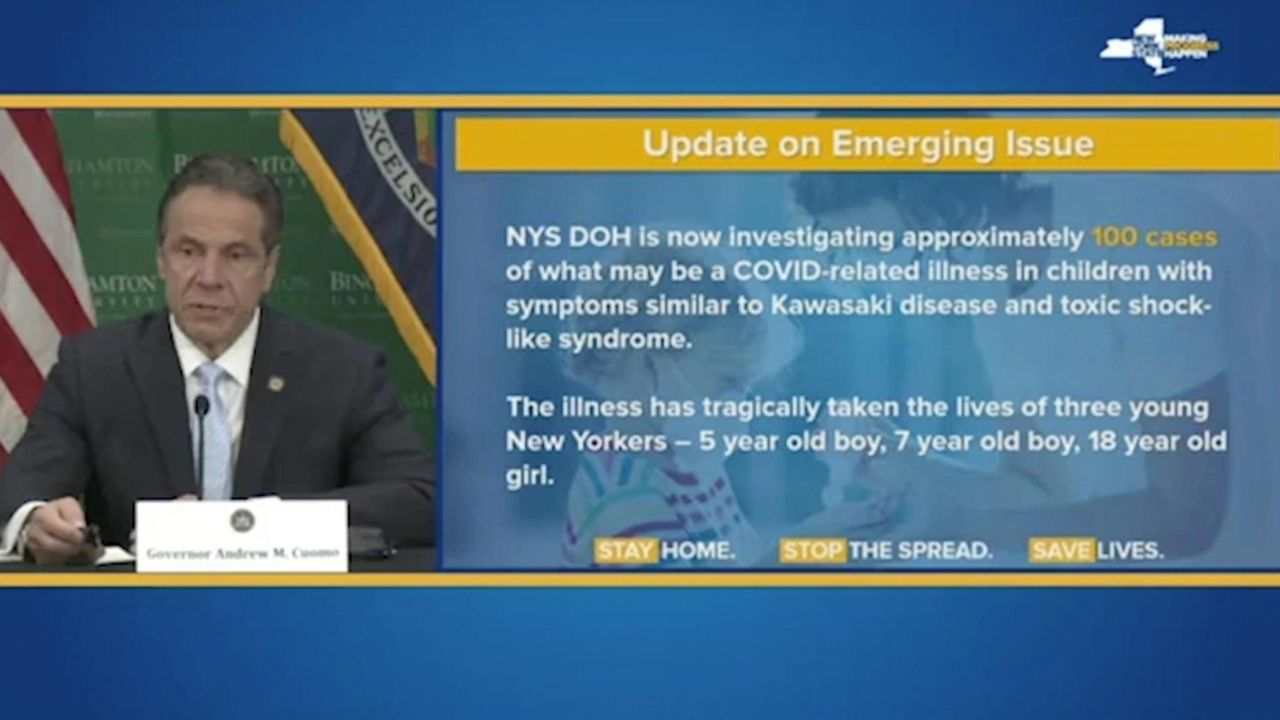 Gov. Andrew M. Cuomo said Tuesday that the New York State Department of Health is investigating about 100 cases of COVID-related illnesses in children who range in age from infant to 21 years old. Credit: NY Governor's Office

Even as the state moves toward reopening parts of its economy, health officials are still investigating a rare inflammatory syndrome apparently linked to COVID-19 that has infected at least 100 children and killed three of them, Gov. Andrew M. Cuomo cautioned Tuesday.

The three children, an 18-year-old girl from Suffolk County and two boys, ages 5 and 7, from New York City and Westchester County, succumbed to the inflammatory condition similar to Kawasaki disease and toxic shock syndrome. The illness attacks blood vessels and "can affect the heart," Cuomo said

Two more deaths are under investigation, the state said.

“This is a truly disturbing situation,” Cuomo said at his daily news briefing on the coronavirus response, held at Binghamton State University. “And I know parents around the state and around the country are very concerned about this, and they should be.”

It is especially unsettling, Cuomo said, because health experts initially believed children were not severely affected by COVID-19, exhibiting little or no symptoms.

"If we have this issue in New York, it’s probably in other states and it probably hasn’t been diagnosed yet" because affected children "don't present the usual COVID symptoms."

Cuomo ordered hospitals statewide to prioritize COVID-19 testing for children displaying symptoms that may indicate they are infected with the syndrome.

A majority of the young patients tested positive for COVID-19 or antibodies. Some were unaware they had COVID-19. Experts believe the syndrome is an overreaction of the body’s immune system as it fights the disease.

Parents are being advised to seek immediate care if their child has a fever for more than five days, severe abdominal pain, trouble breathing, change in skin color, as well as racing heart or chest pain.

“We started this believing that for a long time, this did not impact kids,” Bellone said. “The reality is today, we now know that this virus does directly impact kids.”

New York City has seen 52 cases of the pediatric syndrome, with 10 others pending confirmation, Mayor Bill de Blasio said. Of those cases, 25 had tested positive for coronavirus and 22 had antibodies.

Cuomo said the suspected effect of the coronavirus on minors, along with improving but persistent indicators such as hospitalizations of new coronavirus patients and deaths, should be a reminder for New Yorkers not to let their guard down as the state works to bring back its economy.

“We are making real progress, there is no doubt," he said. "But there is also no doubt that it’s no time to get cocky, no time to get arrogant. This virus has deceived us every step of the way. We have been behind this virus from the very beginning, and it still surprises us.”

Overall, the state continued to see decreases in hospitalizations, intubations and new cases. The daily coronavirus death toll was reported at 195, an increase from the previous day’s 161, but still well below the peak of nearly 800 in early April, Cuomo reported. When home deaths are included in the state count, the number of lives lost by Monday rises to 21,845 statewide, or 205 above the previous day, the state confirmed.

As the indicators improve, Cuomo announced Monday that three upstate regions will resume some economic activity including construction, manufacturing and retail curbside pickup starting Friday after a two-month statewide shutdown caused by the coronavirus. Two other upstate regions also may be able to reopen partially, he said.

Long Island is not ready to reopen, since it has met only five of seven bench marks, including hospitalization rates, testing capability and hospital bed capacity, though Cuomo and other officials said the region is getting close.

In Washington on Tuesday, Dr. Anthony Fauci, the nation's top infectious disease expert, warned bluntly of "really serious" consequences of suffering, death and deeper economic damage if state and local officials lift stay-at-home orders too quickly, even as President Donald Trump pushes them to act to right a free-falling economy.

Fauci's testimony before a Senate committee came as more than two dozen states have begun to lift their lockdowns as a first step toward economic recovery.

In New York, regional groups appointed by the state to coordinate reopening efforts will need to monitor state data on diagnostic and antibody testing, hospitalization rates and transmission rates to decide whether to push forward or pull back from reopening.

"They control that valve, they make sure businesses are complying with the safety precautions … are we staying away from large gatherings?” Cuomo said. The groups will have “a circuit breaker” and “when those gauges turn red, turn off the valves.”

He said the state's plan is a transparent, but tentative push forward: "Start reopening the valve, and watch those gauges" for any resurgence of the disease.

Cuomo admitted to feeling "fear of the COVID second wave" if either the virus mutates or New York reopens its economy too quickly "and the virus rears its head again."

He asked elected officials in Washington to approve a financial rescue package that has “no handouts to greedy corporations, no political pork and no partisanship,” but that properly funds states that were hit hard by the pandemic.

And he asked for $61 billion in federal support for New York alone — or else, the state will have to cut $20 billion each from schools, local governments and hospitals.

“This is not about politics … if you want to be an effective leader, forget red and blue, it does not work,” he said.

Curran said she was hesitant to give a timeline to reopening plans and reiterated that the state will determine when regions are prepared to reopen under federal guidelines.

On the 24th consecutive day of declining hospitalizations there were still 697 patients treated for the coronavirus, down 24 from the previous day, she said. Seven fewer patients were on ventilators, bringing those intubated to 190.

Curran cautioned that while the county has met certain criteria, there are several of the governor’s seven metrics for reopening not yet realized, such as a 14-day decline in hospital deaths or fewer than five deaths per day over a three-day average.

“We are not there yet,” said Curran, who emphasized the region was in the “expected to get there” category, as deemed by Cuomo.

Curran said she is lobbying for more of the county’s businesses to be defined as essential, and she encouraged business owners to get innovative in devising plans to reopen safely.

Nassau County has about 50 disease investigators — 350 short of the number necessary to perform effective contact tracing under a reopening plan, Curran said.

Lawrence Eisenstein, Nassau's health commissioner, said the department had been doing COVID-19 contact tracing since February and there would have been many more coronavirus cases without it. He cautioned against reopening illegally or too quickly.

“Until you have zero cases, you have to make sure you have the mechanisms in place to prevent the spread of disease,” Eisenstein said. “The worst thing that can happen to businesses and all of us is that we have a huge spike in cases.”

While wearing masks will help prevent the virus' spread in public settings, Eisenstein said: “You can’t have a big stadium of people wearing masks and say it’s going to be OK.”

The number of new confirmed cases on Long Island continued a general decline that is edging it closer to the numbers when the pandemic first escalated in Nassau and Suffolk in mid-March.

Bellone said he was pleased the number of new daily positives continues to drop. “That number has declined dramatically over the last several weeks, when we’d been up to 1,000 [new] cases a day,” he said.

He also said the number of hospitalized COVID-19 patients dropped by 15, to 575. It is the “first time we’ve been below the 600 level since the end of March — another real indication of the progress we’re making,” he said.

The region's hospitals also saw declines. Northwell Health on Tuesday said it had 1,067 COVID-19 patients at its 19 hospitals, a 25% drop from the same period a week ago. Northwell has reported a daily decrease in the number of hospitalized patients 31 of the last 32 days.

NYU Winthrop said it had 145 COVID-19 hospitalized patients, down 67% from the hospital's peak of 433 patients April 9.

De Blasio said the city is also contemplating a Plan B, which could consist of a staggered school day or hybrid instruction with both classroom and online learning.

“If Plan A can’t happen, there’s lots of other permutations that still could allow us to give kids a great education and take a major step back to normal, but it’s way too early to know which it will be. We’ll have scenarios and planning for multiple eventualities.”

New York City has hired a “director of isolation” — Dr. Amanda Johnson, a Harvard-trained physician — to oversee matters related to people who are exposed or infected and need to be isolated at a place like a hotel or at home, de Blasio said.

He also said the first 535 contact tracers — personnel who will find those who have had contact with an infected person — are being trained. He expects between 5,000 and 10,000 such personnel to be doing the job. The city has so far gotten 7,000 applications.

With the pandemic forcing the closure of many businesses, sales tax revenue dropped 26.4% on Long Island in April compared to 2019, leaving the region grappling with a shortfall of $53.6 million, according to new data released Tuesday by state Comptroller Thomas DiNapoli.

“The coronavirus has hurt household finances, and the April sales tax figures show how deep it is cutting into municipal finances,” DiNapoli said. “Sales tax revenues are vital for the counties and cities that are on the front lines of fighting the COVID-19 pandemic. They are the first responders and provide a safety net of services for New Yorkers.”

The sales tax decline was widespread and felt across the state.

Nearly every city in the state saw large losses, ranging from a drop of 20.1% in White Plains to a decrease of more than 37% in Gloversville.

DiNapoli said it’s unclear how the growing reliance on e-commerce shopping would offset the loss of retail and restaurant businesses that are now subject to state and local sales taxes.

What you should know about the children's syndrome linked to COVID-19The new illness affecting children is called pediatric multi-system inflammatory syndrome and is thought to be linked to the novel coronavirus. 6 people playing key roles reopening LIThe governor has counted the Island among areas that "are very close" to meeting reopening requirements. Remembering LIers lost to coronavirusThey were mothers, fathers, sons and daughters. Teachers, health care workers and veterans. Neighbors and friends. See the latest news on the coronavirus, vaccinesKeep up to date with the latest on the global coronavirus outbreak.