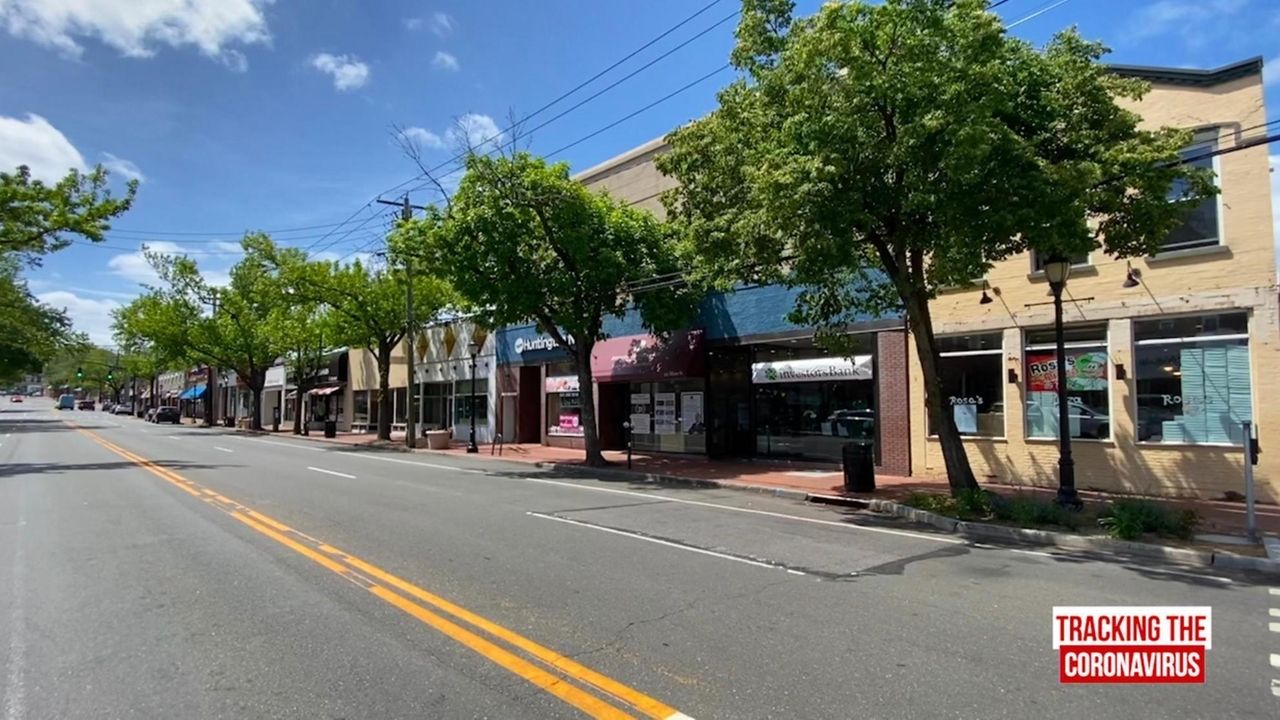 Long Island could be close to beginning the reopening process: Gov. Andrew Cuomo says the first phase could begin next week. With the coronavirus shutdown in effect since March, Long Islanders tell us what they look forward to once things get back to normal. Here’s the latest in Friday's coronavirus wrap-up video. Credit: Newsday / Staff; Howard Schnapp

Long Island could start to reopen its economy next week after a shutdown of more than two months due to the coronavirus pandemic, Gov. Andrew M. Cuomo said Friday, as long as deaths from the virus continue to decline and Nassau and Suffolk counties bring their contact tracing operations up to speed.

The state will allow construction companies to immediately begin setting up work sites and equipment to prepare for relaunching their activities next week under the first phase of reopening, he said. The order also applies to the Mid-Hudson region north of New York City.

"If the number of deaths continue to decline … they get their tracing up and online, both regions could reopen,” Cuomo said.

He added: “We are hopeful that the number of deaths continues to decline and then they would be reopening" as long as they ramp up efforts "to get their tracing numbers up.”

“We were obviously very, very pleased and excited,” Pally said. “It seems as though we will have the ability to go back to work quickly. We hope to bring back to work thousands of people building places for people to live.”

This is good news not only for the crews that work on building homes, he said, but also for the companies that supply the materials such as lumber, as well as the electricians, plumbers and others who work on new housing.

As the builders start with staging areas, he said, they will have to abide by new rules related to COVID-19, such as providing signage telling people not to go on the site and making available an abundance of hand sanitizer for workers. Otherwise, crews will start bringing in the materials needed for the job, such as lumber and appliances.

Nassau County Executive Laura Curran was pleased that Long Island is poised to enter the first phase of reopening — which, besides construction, will include curbside retail, manufacturing, agriculture and fishing.

And she added: “I’m a firm believer that protocols for one kind of thing can work for another kind of thing, and I’m very happy that the governor agrees with that.”

Meanwhile, in a preview of what the Memorial Day weekend may bring, the Connetquot State Park was already at capacity by 11 a.m. Friday, forcing officials to shut it down to any more incoming visitors and traffic, according to the New York State Parks website.

As of 1 p.m., Bayard Cutting Arboretum in Great River also was closed.

Cuomo: Long Island on track to begin reopening next week Gov. Andrew M. Cuomo said Friday that Long Island could start planning to reopen its economy next week as long as deaths from the coronavirus continue to decline and Nassau and Suffolk bring their contact tracer operations up to speed. Credit: NYS Governor's Office

New York City beaches will remain closed this weekend for swimming, prompting concerns among officials on Long Island that beaches here could attract overwhelming crowds pining for the waves.

Nassau and Suffolk are limiting county beaches to residents, but state beaches, including Jones Beach, Robert Moses, Sunken Meadow, Hither Hills, are open — albeit capped at 50% capacity in the parking lots. Cuomo said the parks will be open from 6 a.m. to 9 p.m., with swimming permitted from 9 a.m. to 5 p.m.

New York City Mayor Bill de Blasio on Friday dismissed suggestions that his policy was creating havoc for other areas.

Asked about comments by state Sen. Todd Kaminsky (D-Long Beach) that the state should have a single approach for the region — to include the opening of city beaches everywhere with occupancy limits — de Blasio told WNYC's Brian Lehrer: "I'm surprised he's not seeing the reality that the city has been the epicenter not only of the state crisis but of the national crisis, and, yes, there's been a real challenge on Long Island as well, but no one would compare the two.” 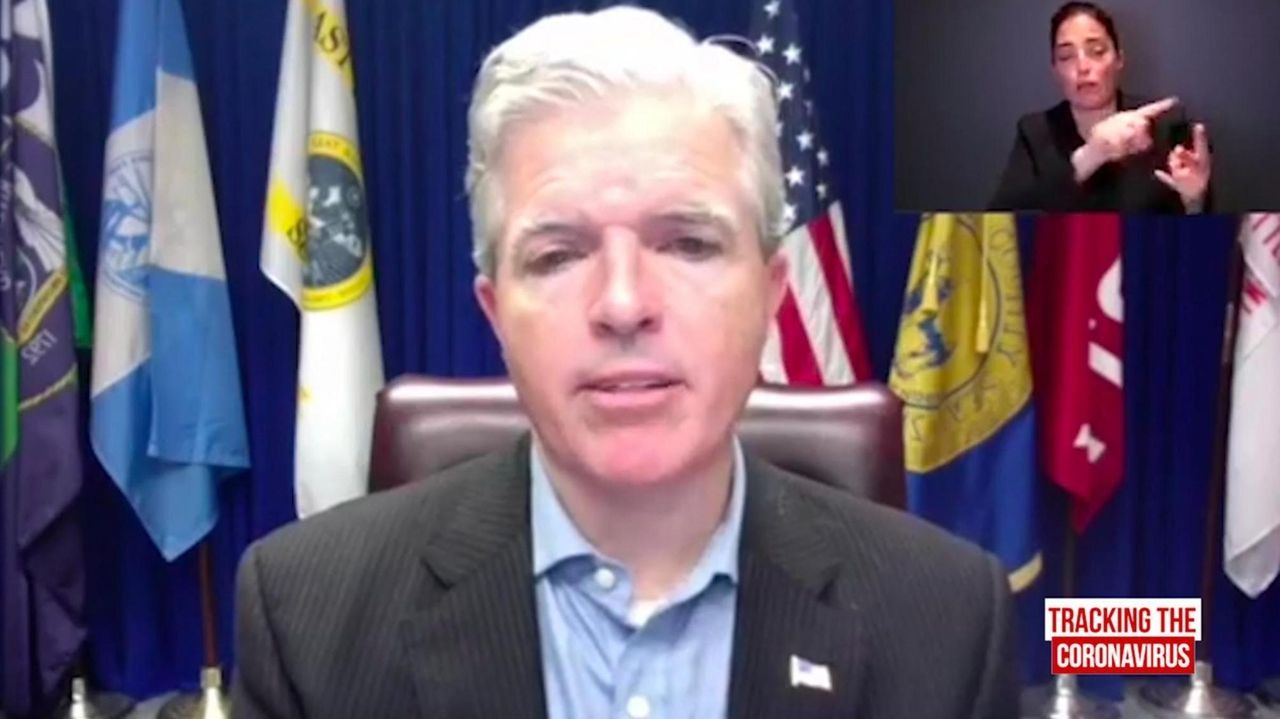 Bellone: Ready for phase one At his daily coronavirus briefing on Friday, Suffolk County Executive Steve Bellone said the county was on track to hit Phase One of the reopening process.  Credit: Suffolk County executive Facebook

In the city, de Blasio continued, "There's 8.6 million people in a very small space, most of whom don't have cars; most Long Island residents use their cars to get to beaches. Most New York City residents go by subway or bus, which is a problem in and of itself … I just think in some ways, people want to add drama where there doesn't need to be any.”

De Blasio said he's making his decisions "based on health and safety" and that it would be irresponsible to open city beaches to swimming, as he said happened in Florida and California, where "they had vast crowds just like normal."

He added: “I respect the decisions that the folks on Long Island are making to try and protect their people and do what works for them. I just don't see a big controversy here.”

Cuomo appeared to try not to wade into any conflict, saying he understood the positions of the various officials, but noted it could cause problems. 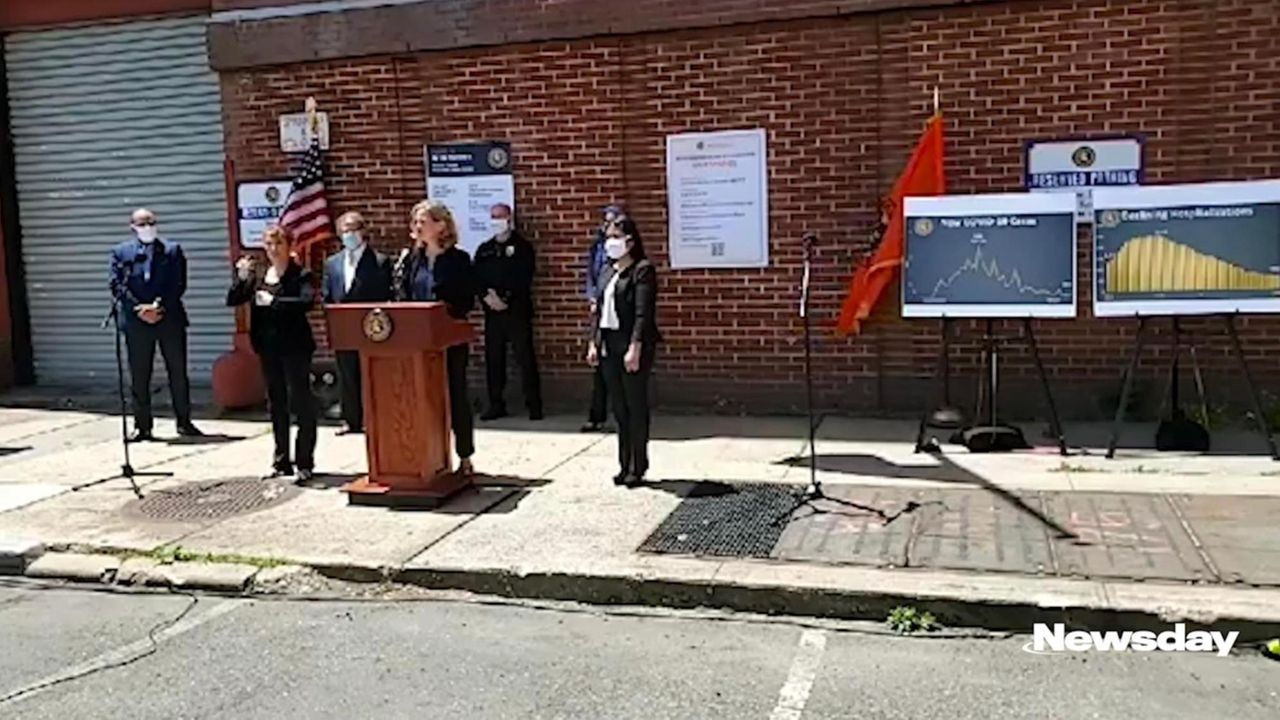 On New York City’s beach closures, he said, “I understand that thinking.”

He did anticipate the state beaches could "see an increased demand on Long Island."

De Blasio urged his constituents to be restrained through the holiday weekend.

The NYPD will increase its beach patrols by 30%, and the city will dispatch 2,300 social-distance “ambassadors,” and blast audio messages across the city cautioning against illegal gatherings, he said.

While city beaches are open though not for swimming, De Blasio said they could be closed and fenced in if social distancing and no-swimming rules aren’t obeyed.

He said the city’s lifeguarding corps is preparing for the possibility that beaches could reopen to swimming later in the summer. “The lifeguards will be ready long before we would be able to push the button for any kind of deeper reopening on beaches, so people can rest assured that piece will be ready to go,” he said. 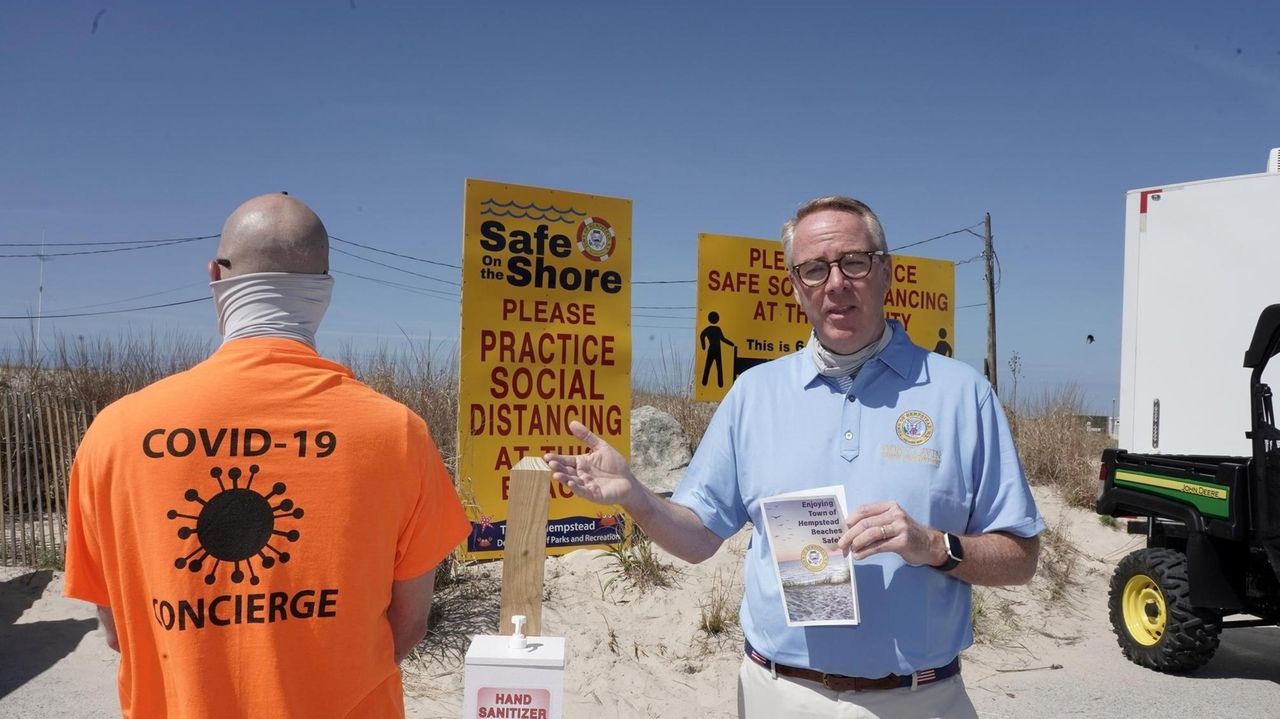 He said signs were erected reminding people about 10-foot spacing required for beach blanket dispersal and about maintaining 6 to 8 feet distance in the water.

Further, the boardwalk at Jones Beach is "bifurcated," with people walking one way on one side, and in the other direction on the other side, he said.

In Suffolk, County Executive Steve Bellone said the holiday weekend will not only mark the unofficial beginning of summer, but also a transition toward reopening from the COVID-19 crisis.

The county will bring back the reservation system Friday for county campgrounds, Bellone said. Campgrounds will reopen June 1, but the reservations will be available from July 15 forward, he said.

“This is just another positive sign of the progress we’re making,” Bellone said.

The campgrounds will have some new rules to deal with COVID-19, he said. There will be no tent camping allowed, but only camping with a self-contained unit. People will be able to go camping together as a family, but there can be no big parties with friends, he said.

He noted that, despite the federal government prohibiting the customary group flag placement at the national cemeteries where many veterans are buried, volunteers will be placing flags at the graves of veterans in other cemeteries in the county.

In other precautionary measures, officials in the Village of Hempstead said Friday that parks, pools and recreation centers will be closed until further notice because too many people are ignoring social distancing orders, including using masks in a community that is the epicenter of the COVID-19 pandemic in Nassau County, with cases continuing to rise.

Village police officers will be on patrol throughout the weekend to enforce social distancing, and will work with building inspectors to monitor businesses, officials said. Police officers are being asked to break up crowds as well.

Officials said the nation’s largest village, with 50,000 people, has had more than 2,000 positive coronavirus tests and needs to continue enforcing distancing measures.

“We still have quite a few people who are not abiding by these regulations,” Hempstead trustee Waylyn Hobbs said. “It is not only selfish, but puts vulnerable people at risk. Unfortunately, we do have a handful of residents going to parks without masks and not practicing social distancing.”

In Washington, D.C., meanwhile President Donald Trump said Friday that he has deemed churches and other houses of worship "essential" and called on governors across the country to allow them to reopen this weekend despite the threat of spreading the coronavirus.

The number of patients newly hospitalized with COVID-19 dropped to 225, a level last seen in late March when the pandemic was just starting to take off. That compared to the peak of about 3,200 a day in early April.

The total number of people in hospitals because of COVID-19 had dropped to 4,844 by Thursday, again, far off from the peak of nearly 19,000.

Bellone said a total of 58 coronavirus patients were discharged from hospitals in the last day in that county.

“We love to report these numbers,” he said. “These are people who were sick enough to be in a hospital, but are going home to get well with their families.”

Controversy continued around the issue of nursing homes, and the response to the coronavirus threat faced by their vulnerable residents.

The Associated Press reported Friday that more than 4,300 COVID-19 patients across New York were discharged to nursing homes as part of a since-reversed state directive that was meant to free up hospital beds at the peak of the pandemic.

Cuomo has come under increasing criticism for the original order, with more than 5,800 COVID-related fatalities having been reported from nursing and adult care facilities.

Gurwin Jewish in Commack, one of Long Island's largest nursing homes, received 58 COVID-19 patients from hospitals, the AP reported. The facility has reported 45 confirmed or presumed COVID-19 deaths to the state, records show.

“We can’t draw a straight line from bringing in someone positive to someone catching the disease, but we’re talking about elderly, fragile and vulnerable residents,” Gurwin Jewish CEO Stuart Almer said to the AP.

On the economic front, Cuomo announced a $100 million fund to provide loans to small businesses that may not have received assistance from federal coronavirus programs.

Businesses with 20 or fewer employees and less than $3 million in gross revenues are eligible.

He said more than 100,000 of the businesses have shut permanently since the pandemic hit.

Curran lauded the program and said the county is creating a plan to tap into that resource, with a $500,000 extra investment anticipated in partnership with the Nassau Industrial Development Agency.

“We have seen the pandemic wreak havoc on our economy,” Curran said.