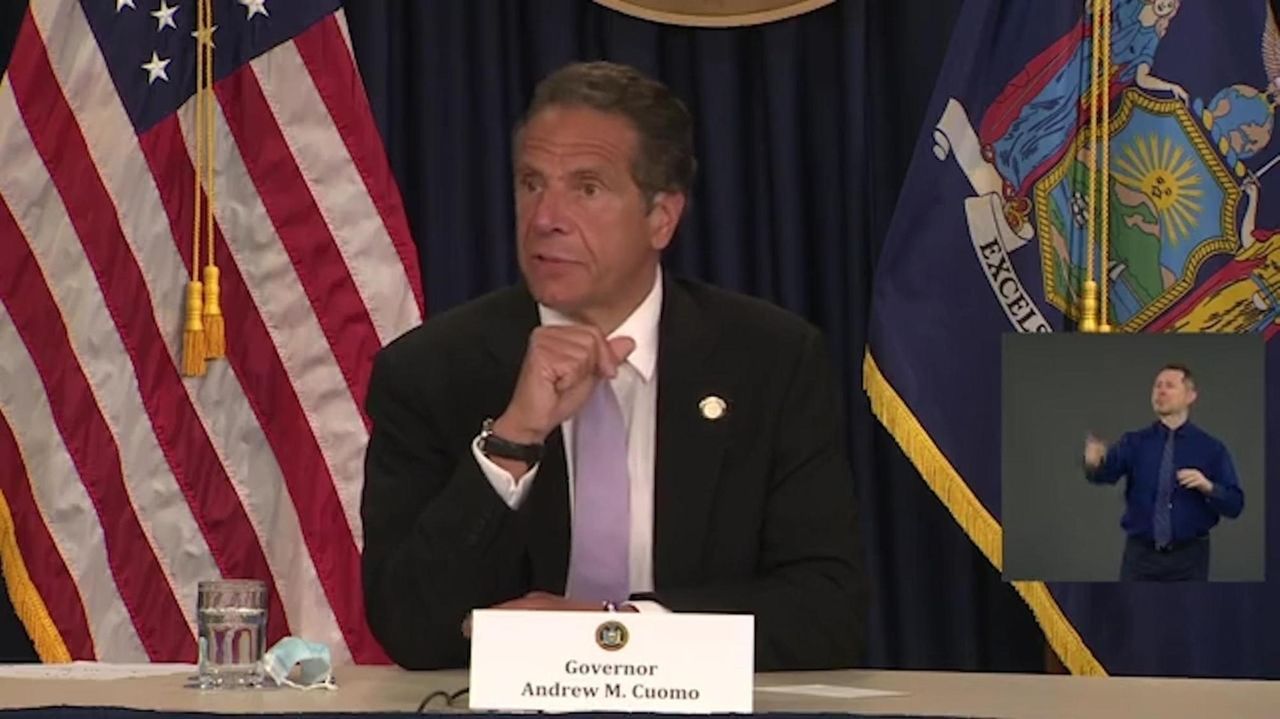 Gov. Andrew M. Cuomo and his counterparts in New Jersey and Connecticut announced a quarantine order for anyone arriving in the tristate area from Florida and some other states experiencing high rates of coronavirus transmission. Credit: Newsday / Chris Ware

New York, New Jersey and Connecticut announced Wednesday "a joint travel advisory" requiring visitors from states with high infection rates of the coronavirus to quarantine themselves for 14 days when they visit the tristate region.

New York Gov. Andrew M. Cuomo, hosting a news conference with New Jersey Gov. Phil Murphy and Connecticut Gov. Ned Lamont, said the three states want to maintain their gains in halting the spread of the virus while the number of cases is rising in more than half the states in the country — with some even breaking daily records.

The policy was to take effect at midnight Wednesday.

"It’s only for the simple reason that we worked very hard to get the viral transmission rate down," said Cuomo, adding that he wasn't inferring there is anything "malicious or malevolent" with those travelers. "We don't want to see it go up because a lot of people come into this region and they could literally bring the infection with them."

States currently meeting that criteria are: Alabama, Arkansas, Arizona, Florida, North Carolina, South Carolina, Texas and Utah. Washington was initially on the list, but officials said it was removed after its figures were corrected.

Cuomo said the order was not just "symbolic." Violators can face fines of $2,000 for the first offense, $5,000 for the second offense, and $10,000 if they "cause harm," he said. They also could be subjected to a judicial order and mandatory quarantine, and be required to pay the cost of the quarantine.

Cuomo acknowledged enforcement will be based partly on the honor system, but he laid out scenarios that could lead to violators being caught and punished.

“If you go to a hotel and a hotel clerk asks, ‘How come you are not on quarantine?’ " he said, or a businessman at a meeting who gets asked, “Didn’t you just come from Florida?”

Someone could send an email or call authorities, he said.

Or, “You get pulled over by a police officer. ‘Oh, you have a Florida license. When did you get here?’ You can’t lie because he can look it up. The Port Authority has all the records, and Port Authority is going to make all the travel records available."

Those caught in violation also would end up "in mandatory quarantine," he said.

The quarantine policy could disrupt plans for many travelers. 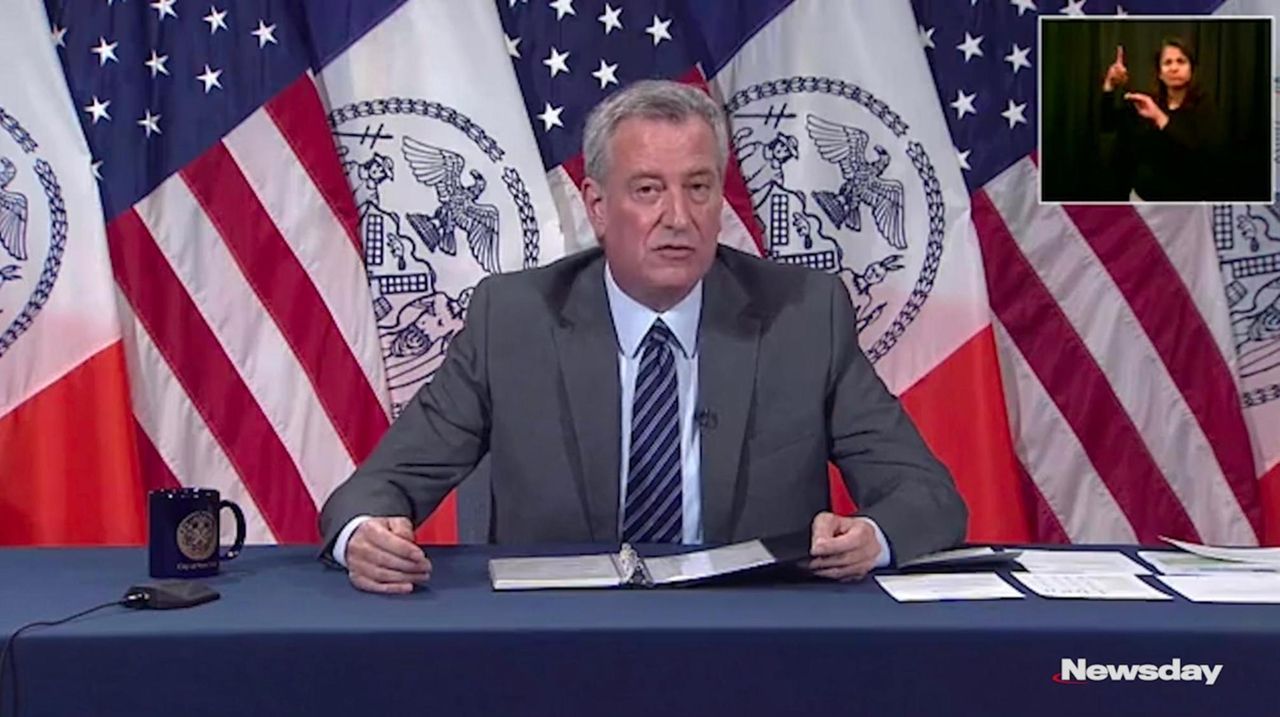 $1B budget shortfall could lay off workers in NYC New York City Mayor Bill de Blasio said Wednesday that an estimated 22,000 municipal workers could be laid off in the fall due to a $1 billion budget shortfall. Credit: NY Mayor's Office

Joan Kulick, who relocated to Bluffton, South Carolina, from Southold just over three years ago, said she was upset she would have to wait even longer to visit loved ones, even if it seems a necessary sacrifice.

“Do I enjoy the fact that there are restrictions?” she asked. “No. It bothers me that I can’t see my family — but there probably should be more restrictions.”

Kulick said that she would hate to infect a member of her family or get infected herself.

“We won’t take a trip up north until the numbers are good in both places,” she said.

"As the good people of Utah work to stem the rising tide of cases and hospitalizations in our own state, we call upon them to be good citizens and abide by the guidelines of state and local governments in the areas to which they may travel," the governor's office said in a statement.

“This draconian policy means anyone traveling for a business conference to a state on his list will be forced into quarantine, and anyone who already made vacation plans will, too,” he said.

“We have had great success at flattening the curve, but it has come at a great cost here in New York,” Bellone said, adding that it was unclear if local police would be required to enforce the order. “We want to make sure we can keep these numbers down as we reopen our economy.”

New York, once the epicenter of the pandemic in the United States, now has among the lowest transmission levels in the country.

The three states will post messages about the order along highways, at airports and on websites and social media, Cuomo said. They also will ask hotels to inform visitors who travel from any of the affected states about it, and ask travel agents to spread the word.

Murphy said: "We live in the densest neighborhood in America. We've been clobbered by this virus. No region in the country has paid a bigger price with the loss of brothers and sisters … This is a smart thing to do. We have taken our people, the three of us, these three states, through hell and back. The last thing we need to do right now is subject our folks to another round."

Lamont said the order "is what we need to do to make sure that our region stays safe … and we will be monitoring this carefully."

Meanwhile, Cuomo also announced that the Mets and the Yankees will start their rescheduled spring trainings at Citifield and Yankee Stadium on July 1. And officials announced the New York Marathon is canceled this year.

'Walk and chew gum' for recovery

Bellone called Long Island’s entry to Phase 3 on Wednesday a “significant milestone” for the region.

“This is another huge step forward for all of us as we open more businesses and get more economic activity moving in our county,” Bellone said. “And that is critical.”

Nassau County Executive Laura Curran said more outdoor youth and adult sports, including baseball and softball, will be allowed to open, starting July 6. Grass and multipurpose fields in county parks will be opened for soccer leagues. 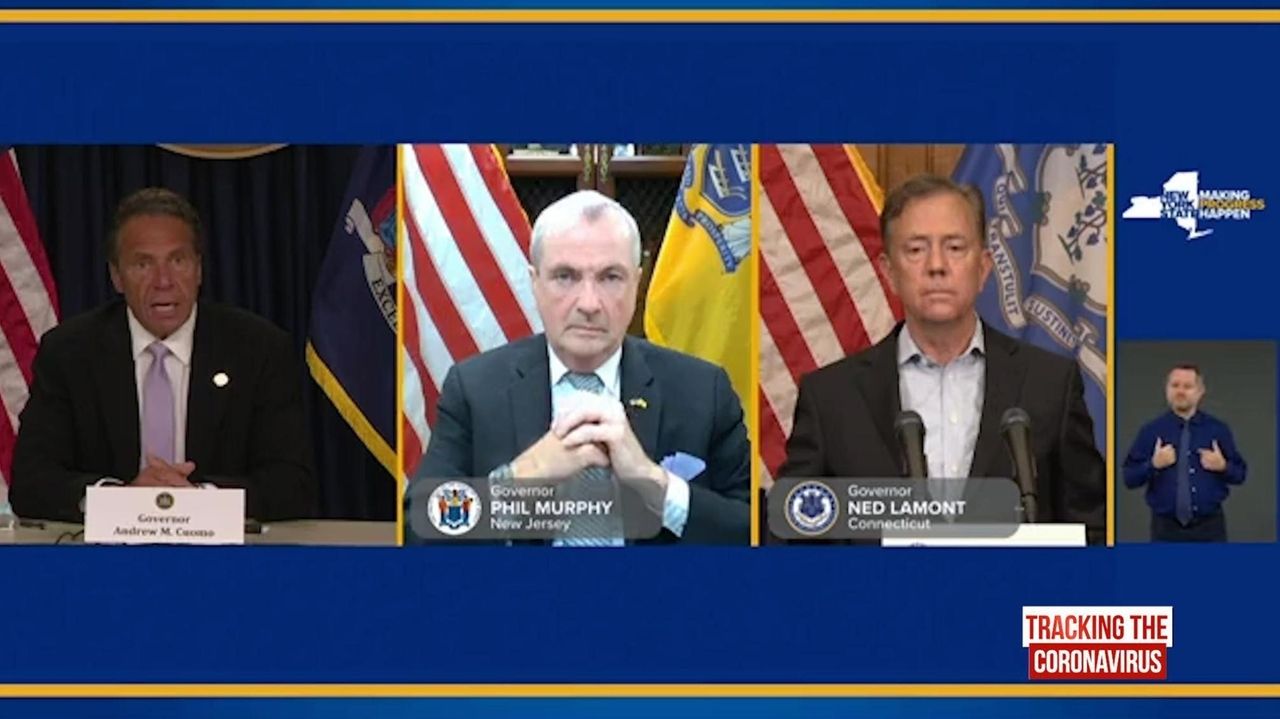 Tristate area requiring visitors from states with high coronavirus transmission to quarantine Gov. Andrew M. Cuomo, in a joint news conference with governors Phil Murphy of New Jersey and Ned Lamont of Connecticut, on Wednesday announced "a joint travel advisory" requiring visitors from states with high transmission rates of the coronavirus to quarantine themselves for 14 days when they visit the tristate region. Credit: Facebook / Governor Andrew Cuomo

Curran said she was "disappointed about" the state excluding indoor shopping malls from Phase 4. Gyms and movie theater also were removed.

"Malls are retail, back to chewing gum and walking at the same time, our mall operators have very detailed protocols about how they come back. We're walking through Penn Station, we're walking through JFK. I think we can safely walk through a mall."

Statewide, 1,071 people with COVID-19 were in hospitals Tuesday, the lowest figure since March 19, Cuomo said. The death toll was 17.

Another 581 people were positive for the virus out of 51,144 tested, for a 1.1% infection level, according to state data released Wednesday.

Nassau reported 41 new cases of the coronavirus on Wednesday, and Suffolk had 45, according to state data. New York City had 292.

At Hofstra University, all students must wear a mask and fill out screening forms daily. Hofstra will start classes Aug. 24 instead of Sept. 2. Gone will be two usual breaks, with classes scheduled to end before Thanksgiving.

At Farmingdale State College, no more than a third of the student population will be on campus at one time, with learning supplemented by remote and online teaching.

Get answers to your questions about the COVID-19 outbreak Newsday is committed to answering your questions about the coronavirus outbreak, from the best ways to avoid exposure to who is eligible for testing, and more. Here you'll find links to all our guides. Check back often as we continue to update this page. Resources to help you during pandemicNewsday has compiled this list of telephone numbers, websites and other resources to help you navigate life during coronavirus. Cuomo aide: Malls, gyms and theaters stay closed in Phase 4Phase 4 businesses are being divided into subgroups, with some opening earlier than others, sources say. See in photos how the coronavirus is changing life on LI, in NYC during April 2020See the latest pictures from around the region during the coronavirus outbreak for the month of April 2020