The story was reported by Rachelle Blidner, Matthew Chayes, Scott Eidler, Bart Jones and David Reich-Hale. It was written by Jones.

Travelers from Delaware, Kansas and Oklahoma must now self-quarantine for 14 days upon arriving in New York State, Gov. Andrew M. Cuomo said Tuesday, as officials on Long Island warned they are seeing an increase in new coronavirus cases due to out-of-state travelers.

Cuomo's directive brings the total number of states under self-quarantine orders in New York to 19. The move comes as the number of coronavirus cases is increasing in most states in the country, with some breaking daily records.

Nassau County Executive Laura Curran said Tuesday that over the last two to three weeks, between 15% and 25% of that county's new confirmed cases of coronavirus are people coming from other states. They include local residents who have traveled to other states and are returning home, and others who are visiting Nassau.

The trend is “concerning to us,” she said. “We see the math, we see the escalation in cases in so many states across this country. And up to a quarter of our new cases over the past two to three weeks come from out of state.

"It’s a really big concern as we watch the map. We’re asking that if you come to visit Nassau County, we’ve done a really good job here of containing the virus, of stopping the spread," she said. "If you’re visiting, we welcome you, but if you’re coming from another state where there are a rising number of cases, we want you to take some time to quarantine, get tested."

Cuomo said that “New Yorkers did the impossible — we went from the worst infection rate in the United States to one of the best — and the last thing we need is to see another spike of COVID-19."

A 'very real concern' in NYC

In New York City, members of Mayor Bill de Blasio's administration said they are worried about coronavirus being brought in by visitors from places where the disease isn’t under control.

“Specifically to the issue of importations of infection, that is a very real concern,” said Dr. Jay Varma, a physician, epidemiologist and former city health official who has been brought back into municipal service to advise on the pandemic response. “ … we do have people that come in and out of the city from a huge range and across the United States.”

Some 588 people out of 56,736 tested on Monday in New York State were confirmed positive for the coronavirus, for a 1.04% level, according to data released Tuesday by the state.

In Nassau the level was 0.8%, Curran said, “which is excellent news. We want to do everything we can to keep it that way."

Nassau County recorded 35 new confirmed cases on Monday, while Suffolk had 45 and New York City had 272, according to state data.

The daily death toll from the virus statewide was 10, compared to nearly 800 at the peak in April.

Asked why New York City did not see a surge in infections as a result of mass protests that started in late May, Varma surmised that protests occurred outdoors and most attendees appeared to heed warnings to wear masks.

He said it’s possible that although more people gathered to protest, “there were also many people who stayed indoors — and a sort of counterbalancing effect” of another segment of the population that wouldn’t have done so otherwise.

Meanwhile, Long Island prepared to enter Phase 4 of its reopening on Wednesday. That stage allows higher education, recreation, and arts and entertainment.

“This is a huge step forward to say we are on the verge of getting into this final phase,” Suffolk County Executive Steve Bellone said. “We prepare to enter Phase 4 in very good shape,” noting low case and hospitalization numbers.

In Suffolk the reopening will include the Long Island Aquarium, Maritime Museum and Game Farm, among other “low-risk indoor and outdoor activities,” Bellone said.

Curran noted that film and movie production can also resume. “It’s actually a huge generator for Nassau County,” she said. Nassau is reaching out to a lot of producers, “and they’re ready to go." 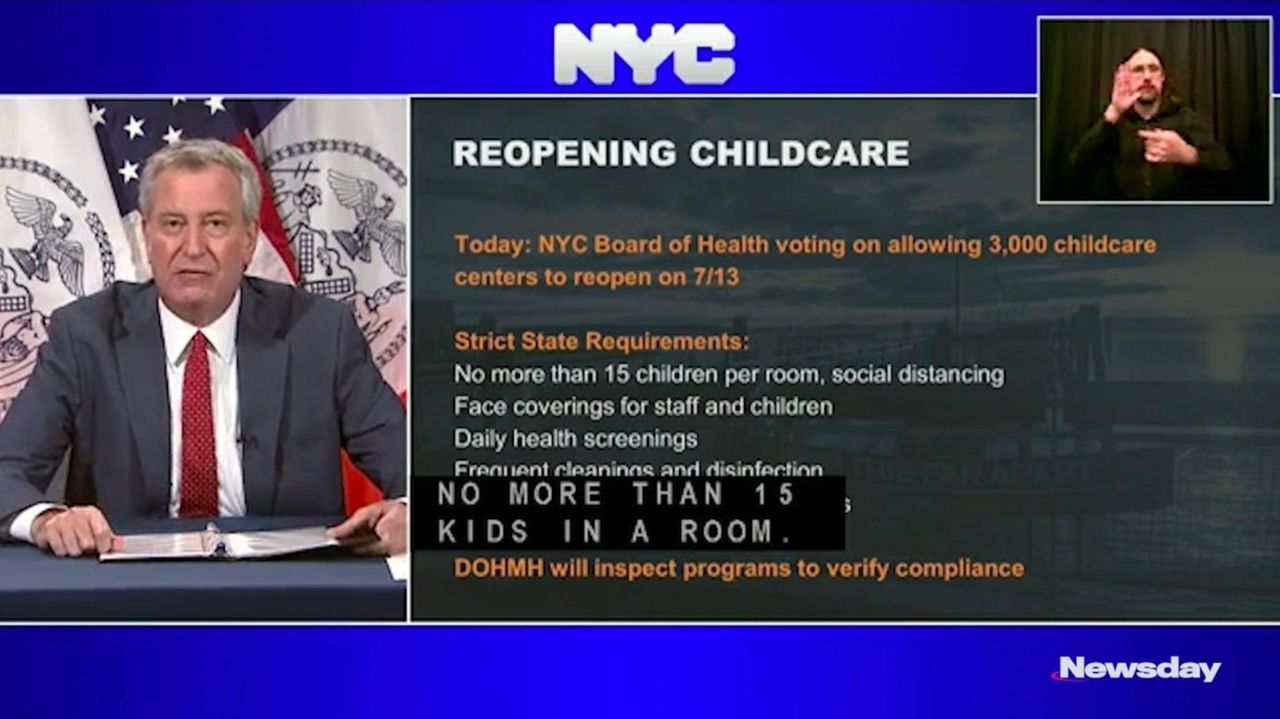 Mayor de Blasio: Child care centers ready to reopen on July 13 Under rules to be considered by the city Board of Health, an estimated 3,000 child care programs could reopen July 13, Mayor Bill de Blasio said at his daily briefing on Tuesday. Credit: NY Mayor's Office

In New York City, de Blasio said the city is aiming to reopen as many as 3,000 child care centers by July 13.

Rules being considered would allow no more than 15 children per room and require social distancing, face coverings for all, health screenings, frequent cleaning and disinfection, and limited sharing of toys.

On Long Island, some of the hardest-hit hospitals in the Northwell system reported steep declines from the pandemic's peak in April.

"Some people are returning to work in an office setting, and they're being tested," Breining said. "We also must test all patients who are coming in for treatment, and we had a long backup of patients who were waiting to get treatment during the height of the pandemic."

The demand, as well as increased COVID-19 cases in many parts of the country, has led to a slowdown in how quickly some patients get their results.

Nidhin Mohan, owner of Deer Park-based New Island Pharmacy, said he made phone calls for three patients who needed to be tested, and many offices were saying the turnaround time for results was up to 10 days.

Trump increases pressure to reopen schools in fallPence and DeVos also urged governors to move forward with a full reopening.