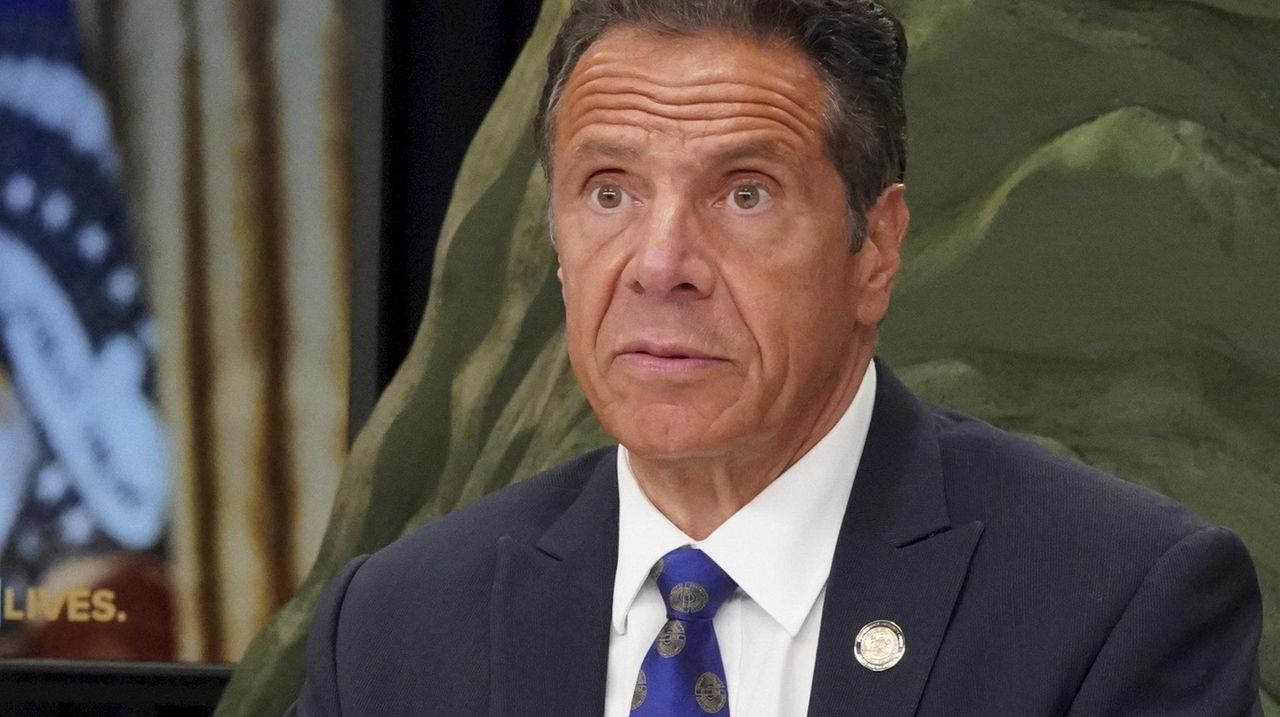 Gov. Andrew M. Cuomo said on Wednesday schools should submit their plans for reopening by July 31 with the state making a decision after the first week in August. Credit: NY Governor's Office

New York State will decide by early August if schools can reopen in September after a monthslong shutdown due to the COVID-19 pandemic, Gov. Andrew M. Cuomo announced Wednesday.

The state will publish guidelines on schools reopening by July 13, Cuomo said, and school districts will have to submit their plans by July 31.

New York will decide between Aug. 1 and 7 whether schools can reopen for the fall semester in any form, the governor said at a media briefing. 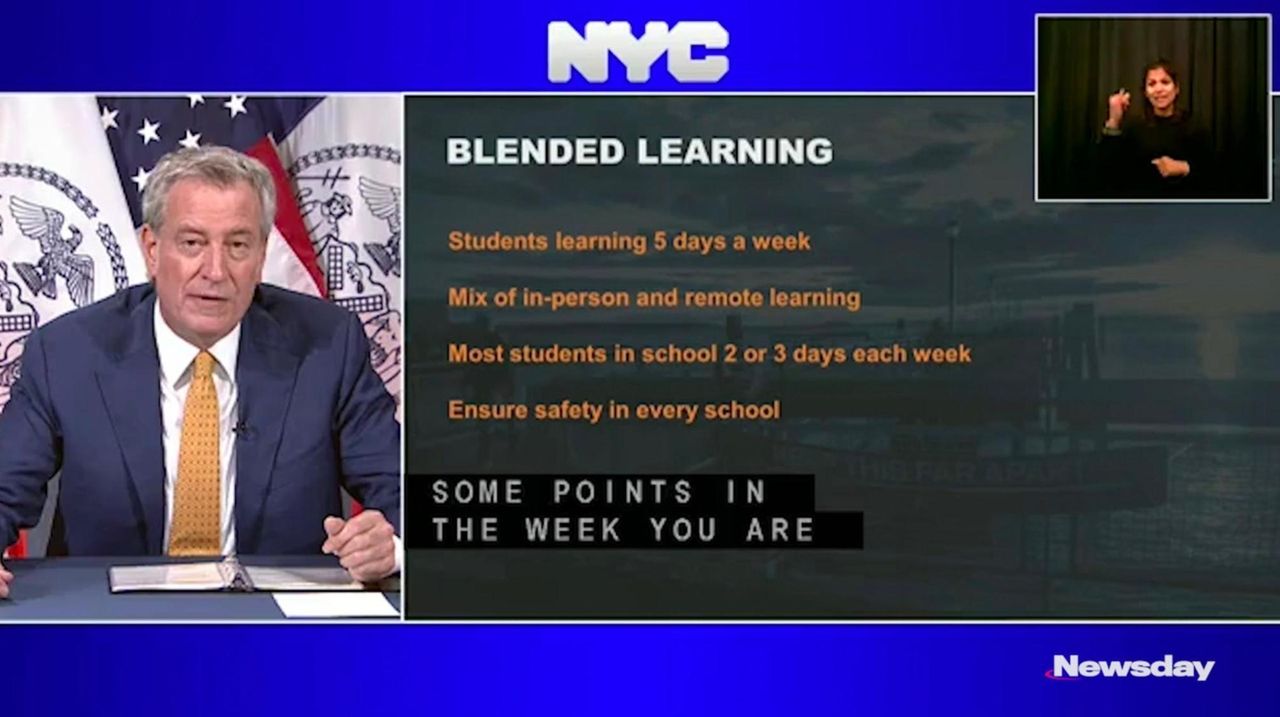 Mayor de Blasio lays out plan to reopen schools in the fall Mayor Bill de Blasio laid out his plan to reopen NYC schools at his daily briefing on Wednesday. Most of the city's 1.1 million public school students will attend in person only two or three days per week to limit the spread of coronavirus, with the balance of time spent doing remote learning. Credit: NY Mayor's Office

Long Island school officials said the governor’s schedule would leave districts with little time to prepare for the academic year.

“All these other states have given guidance,” said William Belmont, president of the Lynbrook Board of Education. “What is the reason we're waiting that long?”

Shari Camhi, superintendent of the Baldwin Union Free School District, questioned the logic of requiring districts to submit their reopening plans before being informed about whether, and to what extent, they could reopen.

“We have all of these scenarios that we've considered," she said. "But we can’t execute any one of them because there are too many factors that we just don’t know."

The Nassau and Suffolk superintendent associations, in a joint statement,expressed gratitude that the state would release guidelines.

“School districts in Nassau and Suffolk counties will continue to develop multiple plans based on various scenarios for reopening our schools safely,” the statement said.

James Montalto, a spokesman for the William Floyd School District, said the "timeline gives us about three to four weeks to open schools. But we have already been diligently planning for all scenarios and hopefully the guidance on July 13 will help."

Cuomo said despite President Donald Trump’s calls this week that schools must reopen in September, the decision was up to state governors.

On Wednesday, Trump said he opposed some of the Centers for Disease Control and Prevention guidelines — which include mask wearing by students and teachers — on reopening schools, although he did not clarify his specific objections. Vice President Mike Pence said revised guidelines would be coming out shortly but sidestepped questions about whether they were being changed to address Trump's concerns, The Associated Press reported.

New York State education officials including Chancellor Betty A. Rosa, the Board of Regents, and Interim Commissioner Shannon Tahoe criticized Trump for pressuring schools to reopen even if it is not safe.

"The rhetoric from Washington D.C. calling on schools to be fully open with in-person classes this fall regardless of the status of the COVID-19 pandemic is a callous disregard for human health and safety, and puts the lives of those we have worked tirelessly to protect in jeopardy," they said in a statement.

“Any decision on the reopening of school buildings should be made based on the best science, data and guidance available from state and federal health professionals. To completely disregard what we have learned so far about this virus and require schools to open under the threat of losing funding during a time when state, local and school budgets are already facing extreme shortfalls is reckless and plays politics with our children’s futures," the statement said.

New York State United Teachers President Andy Pallotta said: "The federal government’s demands that schools reopen without concern for health, safety and equity are simply out of touch. Thankfully here in New York, we know the governor, the Regents and fellow education stakeholders are taking this seriously."

Cuomo said schools had set the first week in August as the “drop dead” date when they needed to know whether campuses could reopen, or must continue “distance learning” over the internet — a program that has gotten mixed reviews from educators, parents and students.

Cuomo indicated there could be different decisions on reopening for different regions of the state, based on the numbers of coronavirus cases in each area.

"We cannot have a whole generation of kids that are falling behind," he said. "We know the devastating impact that would have.”

Cuomo and some of his top aides said private schools including yeshivas and other religious schools, along with charter schools, would submit reopening plans to the state as well, though they would work closely with local public school districts because they have common issues such as transportation.

Some private schools have argued that they should be evaluated on their own merits since they have far smaller student populations and more space than, say, a large public high school with hundreds or even a few thousands of students housed in a single building.

Joshua Crane, the head of one private school, The Stony Brook School, said he was "grateful" the state provided a timeline.

"I truly hope that in the evaluation of plans, each plan is taken on its own merit," Crane said. "Many of us have been carefully planning since late spring to be able to open safely for our students in the fall. It would be a shame not to capitalize on all the good progress that has been in made in our state by not reopening schools."

Earlier Wednesday, Mayor Bill de Blasio said most of New York City's 1.1 million public school students would attend classes in person, two or three days a week, to limit spread of the coronavirus, and do remote learning the other days.

Another reason is that fewer students can fit in classrooms to maintain six feet of social distancing.

"The math just makes it clear," de Blasio said. "Most schools will not be able to have all their kids in school at the same time, and schools that are historically overcrowded will really particularly struggle."

De Blasio has said that masks, frequent building cleanings, hand-washing and other precautions would be in place.

The city will offer an option for families who don't want to send their students to school in person and want remote-only learning, he said.

Cuomo said Wednesday the final decision on whether schools reopen, and if their specific plans are approved, would be made by the state.

Under New York City's plan, the typical classroom will hold between nine and 12 students, according to Schools Chancellor Richard Carranza.

New York State’s coronavirus indicators meanwhile, continued on what Cuomo called a good path. About 692 people out of 57,585 tested on Tuesday were confirmed positive for the coronavirus, a 1.2% level statewide.

About 97 COVID-19 patients were intubated, the first time that number has been under 100 since the pandemic struck, and the lowest figure since March 16, Cuomo said. At the pandemic’s peak, the figure was 4,449, according to state data.

See the latest news on the coronavirus, vaccinesKeep up to date with the latest on the global coronavirus outbreak. Get answers to your questions about the COVID-19 outbreak Newsday is committed to answering your questions about the coronavirus outbreak, from the best ways to avoid exposure to who is eligible for testing, and more. Here you'll find links to all our guides. Check back often as we continue to update this page. Sign up for COVID-19 text alerts