This sign in Montauk on Thursday reminds residents and visitors of the mask-wearing and social distancing rules. Credit: Morgan Campbell/Morgan Campbell

This story was reported by Matthew Chayes, Bart Jones and David Reich-Hale. It was written by Jones.

New York City will enter the fourth phase of reopening Monday, with limitations remaining in place for indoor activities, as the entire state comes back from a business shutdown triggered by the coronavirus pandemic, Gov. Andrew M. Cuomo said Friday.

Cuomo said New York City's final step in the phased-in reopening since the March closures represents the culmination of a gradual return of the economy guided by health metrics, which the governor maintains has been shown to work because the virus spread is largely under control.

“That is a hallmark for us. Every region of the state will now be in Phase 4," he said. "There are no more phases than Phase 4.”

He noted that “every region has made it through the four phases without having to close." That is a contrast to other states, which reopened quickly, but are now backpedaling and regressing to earlier stages.

However, Cuomo sounded a note of caution, saying the state inevitably will be hit with another wave of coronavirus infections, likely from other states where the virus is surging.

"There will be a second wave. I would wager on it," Cuomo told reporters during a telephonic briefing on Friday afternoon.

He said the state had learned its lesson that when the COVID-19 virus takes hold, it is a matter of time until it makes it to other heavily populated places, as it did when it came to the United States from China and Europe.

"We are painfully aware now that an outbreak anywhere is an outbreak everywhere," Cuomo said.

Still, coronavirus infection levels continued at relatively low levels on Long Island and throughout the state, days after a recent rise in cases had raised concerns in the region.

On Long Island, the percentage of positive results remained steady at 0.9%, while in New York City the rate decreased from 1.2% on Wednesday to 1% on Thursday, according to state figures. 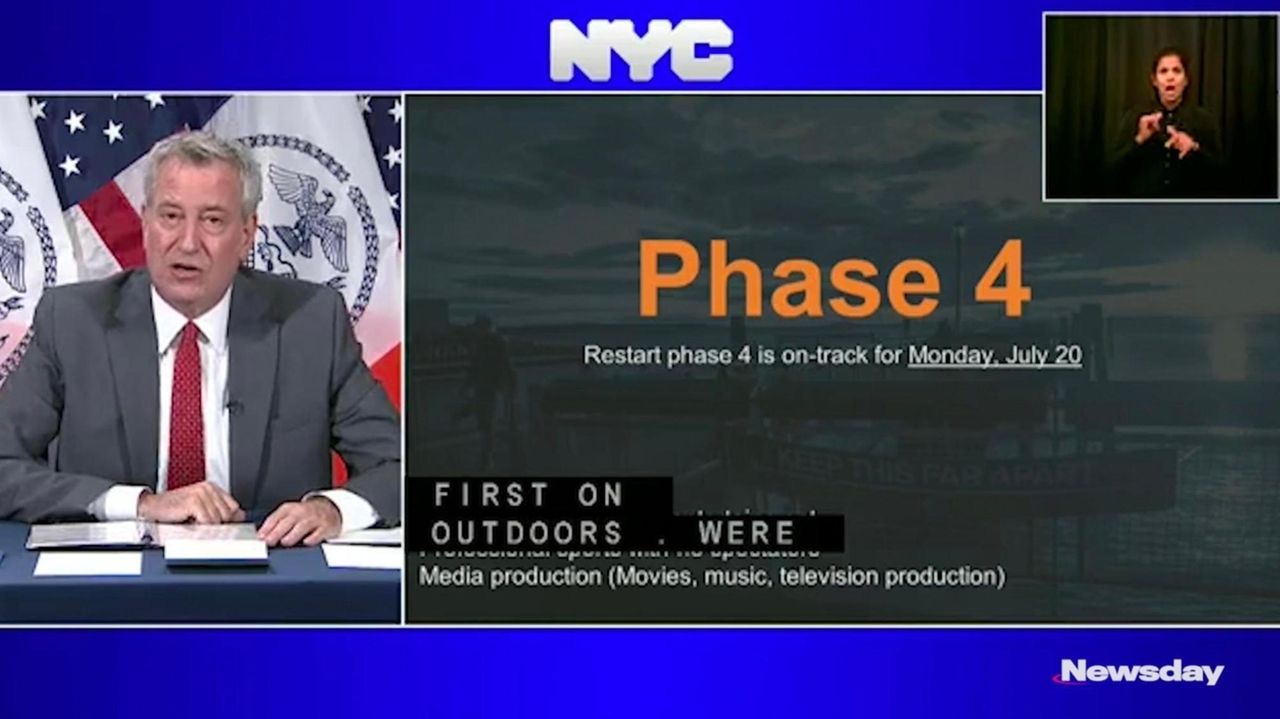 Mayor de Blasio: NYC on track for Phase 4 on Monday NYC is on track to start Phase 4 of reopening Monday, Mayor Bill de Blasio said, with outdoor entertainment like zoos allowed to reopen, but indoor dining will not yet be permitted. Credit: NY Mayor's Office

"We know the prescription: masks, social distancing and hand-washing," Cuomo said. "That's how we bent the curve in New York, and that's how we've kept our numbers so low as we see frightening spikes in the rest of the country."

He added: "We need to keep being smart — and smart means enforcement of the health orders we've put in place that will keep us healthy and prevent us from going back to the hell we went through."

COVID-19 hospitalizations in New York State have dropped to their lowest level since March 18, Cuomo said, with a total 765 people hospitalized, a net decrease of 48 patients.

Ten people died of causes related to COVID-19 on Thursday, Cuomo said, bringing the statewide toll to 25,024. The new confirmed cases of the virus brought the statewide total to 405,551.

The number of new cases was 49 each in Nassau and Suffolk, and 367 in New York City, according to the latest state figures for Thursday's tests.

Northwell Health on Friday said it had five COVID-19-related admissions over the past 24 hours at its hospitals in the downstate region. That is the lowest number of admissions in that health system this month.

The outdoor arts and entertainment that can resume include botanical gardens and zoos, though at a reduced occupancy of 33%, he said.

But indoor dining is still not allowed, de Blasio said. "Museums, not yet. Malls, not yet, still closed for now."

On Friday, Cuomo announced $1.5 million in funding for the “Feeding New York State” program to assist a network of 10 regional food banks, along with local farms to help them provide milk and produce to New Yorkers who are struggling to get enough food amid the pandemic.

“This crisis has put food insecurity — an issue far too many Americans are unfortunately familiar with — on full display," he said, "and not only are we paying attention, but we're taking action to help ensure New Yorkers are not going hungry and have access to fresh, healthy food."