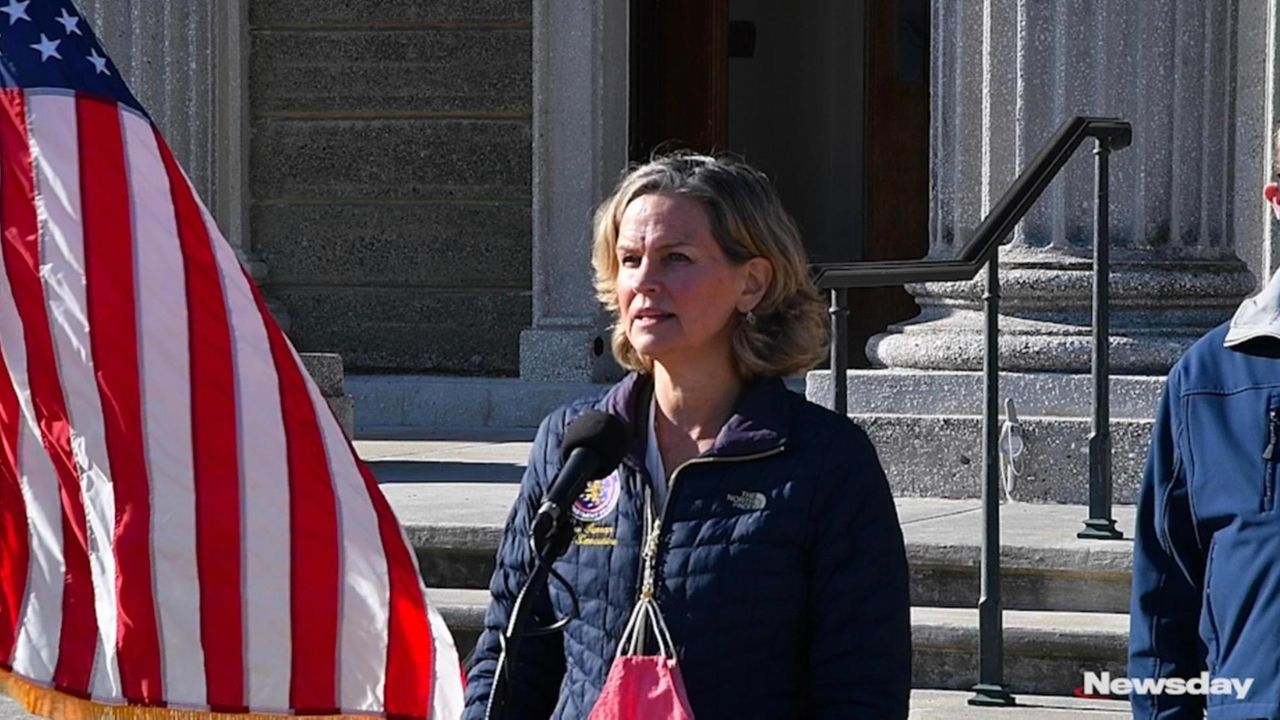 This story was reported by Matthew Chayes, Bart Jones and Craig Schneider. It was written by Jones.

Some school districts on Long Island are warning residents that schools may be shut down since parts of the region are in danger of being designated a "microcluster" by the state because of rising levels of COVID-19 infections.

The Levittown, East Meadow and Connetquot districts, along with the Town of Riverhead, have sent out notifications telling residents to be ready for a possible shutdown.

"The positivity rate in recent days has been over 3% and the seven-day average for the positivity rate over the past week has been over 2.5%," Tonie McDonald, superintendent of schools in Levittown, wrote in a Friday letter to residents. "As a result, the New York State Department of Health and Governor [Andrew M.] Cuomo will most likely designate parts of our region into Yellow Zones, Orange Zones or Red Zones in the coming days."

The zones represent different levels of restrictions for businesses, schools and gatherings, depending on virus spread.

And across New York City, "community spread" has begun once again, ending a lull where the growth of infections was being driven by clusters, according to the mayor’s chief spokesman.

State officials said they are monitoring "troubling spikes" of COVID-19 cases on Long Island and will make a determination about zones.

"As temperatures cool, cases are rising — just like the experts predicted — and we are monitoring increases across the state," said Jack Sterne, a spokesman for Cuomo. "We are working with Suffolk and Nassau County to monitor and address troubling spikes in some communities on Long Island and increase testing and enforcement."

He added that New York State Department of Health officials "will designate cluster zones if the metrics are reached. We need all New Yorkers to shake off COVID fatigue and wear masks, socially distance, get tested, and wash their hands."

School and government officials on Long Island have argued against closing schools, saying they are not major spreaders of COVID-19 and in fact are among the safest places for children to be.

"We have had great success limiting the spread of COVID-19 within our schools," McDonald wrote. "Our schools are a safe place for our students and staff."

On Thursday all public schools in New York City were shut down indefinitely by Mayor Bill de Blasio after the city hit a 3% infection level threshold set by the city.

Closing schools only as ‘last resort’

Nassau County Executive Laura Curran said she "strongly disagrees" with de Blasio’s move, and will fight to keep schools open in Nassau as long as it is safe.

"Thanks to the hard work of school administrators, school buildings have not been a major vector of transmission in Nassau. Our contact tracers have found that the virus is primarily spreading at social gatherings where little to no precautions are taken," Curran said.

Suffolk County Executive Steve Bellone echoed support for schools to remain open. "The County has been working with our school districts to ensure all the measures to stop the transmission of COVID-19 are in place in our schools," he said. "As a result, to date, we have not seen any significant spread of COVID-19 happening in our schools and do not see any reason to shut down schools in Suffolk County at this time. The County is going to do everything possible to keep our schools open."

Cuomo said Friday that if a region becomes a yellow zone, schools can remain open as long as they test 20% of their population within two weeks of the designation.

In orange and red zones, schools must close for four days, but can reopen if all staff and students are tested, with only those testing negative returning. After that 25% of the school population must be tested weekly.

"That is a mandate, that is a state law," Cuomo said.

Lynda A. Adams, Connetquot’s superintendent of schools, wrote Thursday to residents that following an email she sent, "the Suffolk County Department of Health Services has issued an update to mandatory school testing guidelines that would be in place should our region enter the ‘yellow precautionary zone’ following a sustained increase in COVID-19 cases."

She said different regulations have come out, and she is asking Suffolk health officials to clarify if 20% of the entire district student population, or 20% of the students in each school, would be required to be tested regularly for school to resume.

Sterne said that microcluster designations are based on a geographic area’s seven-day average positivity rate being above a threshold for 10 days straight — "i.e., a sustained increase where contact tracing data points to community spread rather than isolated outbreaks."

He said the state also considers the rate of cases per 100,000 residents, hospitalizations, "any links to congregate facilities, and other epidemiological factors. Zones are created based on case prevalence data and in consultation with the local health department."

Cuomo said the state broke another record for testing, with 205,466 completed Thursday. The number of new confirmed cases was 389 in Nassau, 413 in Suffolk and 2,021 in New York City. Thirty-two people died of coronavirus-related causes in the state on Thursday, and 2,348 were hospitalized.

Rozzi said she expects the school, which stopped in-person learning Thursday, to return to in-person instruction on Monday.

The additional cases brings the school’s total to eight active cases, while also quarantining more than 26 staff members and "even more students" who have been contact traced, she said.

The daily number of coronavirus infections reported in New York City on Friday is "worrisome as all hell," de Blasio said Friday.

In a tweet late Friday afternoon, de Blasio’s chief spokesman, Bill Neidhardt said that all five boroughs have at least five ZIP codes with infection rates above 3%, and 40 ZIP codes are over 4%.

"It is now clear that we have entered community spread in New York City," he said.

He added that new restrictions — such as bans on indoor dining, the shutdown of gyms — are likely to be imposed soon after Thanksgiving, likely the first week of December.

On LI, a chorus of calls to keep schools openSchool officials and county leaders said they will do everything they can to make it happen, even as the counties' infection rates exceed the 3% that has shuttered schools in New York City. With COVID-19 cases rising, Cuomo warns of 'tremendous spike' aheadThe state hit yet another high point since the height of the crisis in the spring, Gov. Cuomo said, warning that Thanksgiving gatherings could lead to an infection surge. What you need to know about the new statewide COVID restrictionsWe answer your questions about New York State's new limitations on restaurants and bars, gatherings in private residences and more. Sign up for COVID-19 text alerts