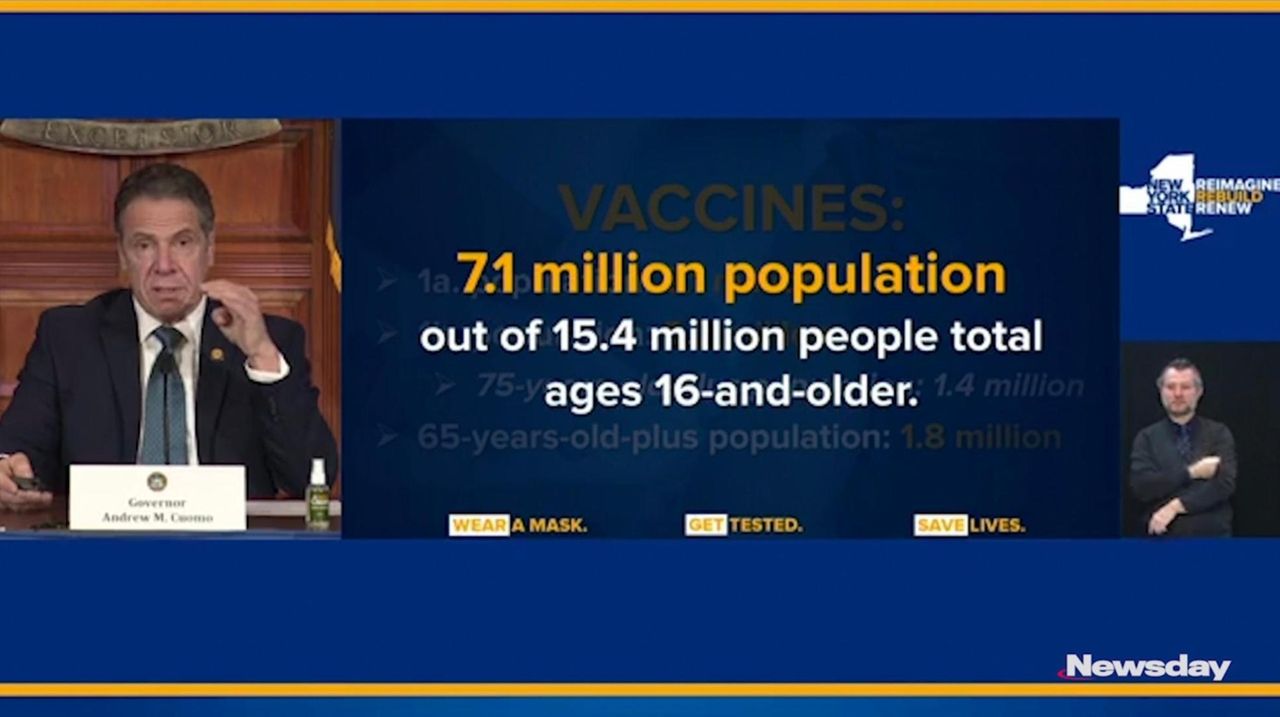 This story was reported by Robert Brodsky, Matthew Chayes, Scott Eidler, David Olson and Bart Jones. It was written by Jones.

State officials on Friday acknowledged problems with the rollout of New York's COVID-19 vaccination plan, but blamed much of it on the federal government for unleashing a "floodgate" of newly eligible people.

They also said the state has administered nearly three-fourths of the 844,250 first doses of the vaccines received so far from the federal government, though its allotment was cut this week.

Gov. Andrew M. Cuomo and his aides said they were in a nearly impossible situation as the number of New Yorkers eligible for the shots rose from about 2 million to 7.1 million in a matter of days, even though the state is receiving about 300,000 doses a week.

"What they did was like opening the floodgates of eligibility, and you have a rush of seven million people: ‘I want the vaccine. I want it now. I was told I’m eligible,’ " Cuomo said during a livestreamed briefing from Albany. "And that entire flood has to go through a syringe. All this volume, and it has to go through the point of a needle, literally and figuratively."

That number actually dropped to 250,000 doses this week, Cuomo said.

U.S. Health and Human Services Secretary Alex Azar II on Tuesday said the expansion of eligibility would save lives, because "some states’ heavy-handed micromanagement of this process has stood in the way of vaccines reaching a broader swath of the vulnerable population more quickly," since too many doses were in storage.

The number of deaths worldwide from the virus since it first struck in China about a year ago surpassed 2 million on Friday, according to Johns Hopkins University, which tracks cases. New York alone has reported 32,566 deaths since the pandemic's start.

Many residents, frustrated and angry as they try to obtain a vaccine that could save their lives, complained that the state's website is in disarray and they cannot schedule an appointment.

"I think we have an incredibly incompetent governor," said Virginia McManus, a 70-year-old widow from Amityville with diabetes and high blood pressure. " … He didn’t bother to plan."

She said she stayed up much of the night trying to get onto the state website, and then spent six straight hours during the day Friday, glued to her computer and constantly pushing buttons to try to get in.

She did, four times, but was kicked off the site all four times. She said she couldn’t believe the scarcity of vaccination sites.

"There’s 1.4 million people in Suffolk County and there’s one site?" she said, referring to one at Stony Brook University. "It’s absurd. It’s criminal."

Melissa DeRosa, Cuomo's top aide, said, "I understand part of this is general frustration with people trying to get through on the site or are trying to book appointments for family members, and it feels like you are banging your head against the wall."

DeRosa said the state is simplifying the website by removing pharmacies, local health departments and hospitals from it, so that only the state mass vaccination sites such as Jones Beach and Stony Brook remain as options for appointments.

Cuomo said the state was essentially entering the names of more than 1,000 vaccine distributors onto its website, including pharmacies and hospitals. When residents plugged in their information, the website returned locations nearest them.

"But when you then went to the distributors in your area, they were all booked," Cuomo said. "So, it was frustrating."

"So, we got out of the collector business," he added, and now only list the state-run sites.

To illustrate the crush of demand, DeRosa said 55,200 appointments were available at the Jones Beach site when the state's website for vaccine reservations went live on Monday. They all filled within two days, she said.

The crush came partly because of shifting federal recommendations on eligibility, which Cuomo said he is following, even though they are not binding.

The first group of people eligible for shots in New York — "Phase 1a" — were front-line health care workers and nursing home residents and staff, making up about 2 million people.

Last Friday, following a new CDC recommendation, Cuomo added "Phase 1b" essential workers such as police, firefighters and teachers to the eligibility list, along with anyone over 75 years of age. That was another 3 million people.

Then on Tuesday, he added anyone over 65 years of age, also following federal recommendations — another 1.8 million people. People who are immunocompromised are expected to be added next.

Not everyone agreed the federal government was entirely to blame, since the state was not obligated to add those groups immediately. Some argued the state should have rolled out the eligible groups more systematically rather than all at once.

"They made a big mistake opening it up to 65-year-olds," said Thomas Furrer, 76, of Blue Point. "They should take care of one area first. Now you are competing against another large sector of the population. It’s crashed the system. This is not the way to do it."

Furrer, a retired high school teacher, said he has spent days trying unsuccessfully to book appointments for himself and his 75-year-old wife, Karen.

Nick Langworthy, head of the New York State Republican Party, said Cuomo's "disastrous bungling of New York's vaccine distribution is an outrage. Every day that goes by, there is a new horrifying development of mismanagement and incompetence … This is a crisis of unprecedented proportions and it needs to be fixed immediately before another New Yorker unnecessarily loses their life at the hands of his incompetence."

Cuomo said Friday: "Our constraint is the federal supply … and that is creating pressure on what was supposed to be the prioritization process."

He also said this week that he included the other groups since other states were doing likewise and following federal recommendations, and he did not want New Yorkers to feel like they were being denied the possibility of a potentially lifesaving inoculation.

Appointments are now booked out 14 weeks at sites such as Jones Beach, DeRosa said, meaning people cannot book appointments until starting in late April. And those appointments have not been posted yet on the state website.

Cuomo has complained that some hospitals have been slow to administer the dosages they have received. While expanding the groups of people eligible for shots, he also expanded the types of places that can administer the shots beyond hospitals to include pharmacies and state-run mass vaccinations sites.

He said residents should now directly contact pharmacies, hospitals and local health departments about the availability of vaccines if they want to use those locations, rather than going through the state website.

Meanwhile, Nassau University Medical Center nearly had to cancel 2,200 appointments due to a shortage of the coronavirus vaccine, NuHealth Chairman Robert Detor said Thursday night. The hospital kept the appointments after the county intervened to obtain more supply of shots.

Cuomo also said officials have confirmed another case of the B.1.1.7 variant of the virus in Nassau County, bringing the state total to 16. The mutation linked to the United Kingdom is believed to be more contagious than the more common strain.

The governor said the state has administered 74% of the vaccines it has received from the federal government.

The statewide positivity level in test results from Thursday was 6.14%, Cuomo said, with levels of 8.27% on Long Island and 5.70% in New York City.

Statewide, 183 people died of COVID-19-related causes on Thursday, including 10 in Nassau and 21 in Suffolk.

Mayor Bill de Blasio said New York City’s vaccine supply is running low and will be gone by next week, despite the "paltry" rate of resupply.

"We’re going to run out," de Blasio told WNYC’s Brian Lehrer. "We are not going to have enough vaccine by the end of next week."

Throughout the week, de Blasio has urged the federal government to replenish the supply.

The city has been getting a "paltry" 100,000 resupply of doses a week; the city gave 125,000 in the first four days of the week, with the numbers increasing.

"If there’s no supply, we’re going to have to freeze the appointment system," he said. "That would be insane."

The federal government and the state were reporting different figures on how many vaccines have been delivered and how many have ended up in people's arms, but Gareth Rhodes, a Cuomo aide, said there was "no discrepancy."

He explained that the full amount of vaccines assigned so far to New York, nearly 1.9 million, "shows up as allocated" in the CDC updates "even though much of that hasn't been delivered yet."

Cuomo said 827,715 vaccines have been administered in the state in the first four weeks of the campaign, with 731,285 of those going to first shots and 96,430 going to second shots.

The agency said there may be a lag time between when doses are administered in states and when they show up as "administered" on the CDC website. The CDC said its numbers also include some doses distributed under a separate nursing home program that the federal government, and not states like New York, administer.

According to state government

According to federal government