Wantagh High School is seen in September. It moved its senior class to remote learning after a group of students tested positive for the coronavirus. Credit: Raychel Brightman

This story was reported by Matthew Chayes, Bart Jones, John Valenti and Olivia Winslow. It was written by Jones.

The senior class at Wantagh High School was forced into remote learning because of an outbreak of COVID-19 among some students at the school, the district superintendent said Wednesday.

The cases prompted school officials to place all senior class members in full-time remote classes this week, though the state has been pushing for expanded in-person instruction as levels of virus spread continue to drop.

On Tuesday, infection positivity levels in tests declined to a level last seen before a surge of cases was tracked from late November through the holiday period, as more people seek to get vaccinated.

"We need more supply to thoroughly vaccinate the population and begin our transition to a post-pandemic world," Gov. Andrew M. Cuomo said.

In Wantagh, a district spokesperson said students in other grade levels continued to attend classes in the school building.

While the district said initially that seniors were banned from participation in athletics, varsity teams were to continue playing games as scheduled. Later Wednesday, McNamara said contact-tracing at the high school was completed and those impacted were notified. Seniors were allowed to participate in athletic activities following COVID-19 testing protocols.

McNamara said the moves were made in consultation with the Nassau County Department of Health and that any student or staff member "deemed a close contact" of those testing positive would be notified to begin a mandatory quarantine. The district is offering free screening tests to senior class members.

He also said the district would "continue to monitor" the situation "to ensure that there is no further impact to additional students or grade levels that would require a more extensive closure of Wantagh High School."

McNamara said the two cases outside the senior class appear "unrelated" to the social gathering where the 12th-graders are believed to have been infected, but the district did not disclose the grades of those students. 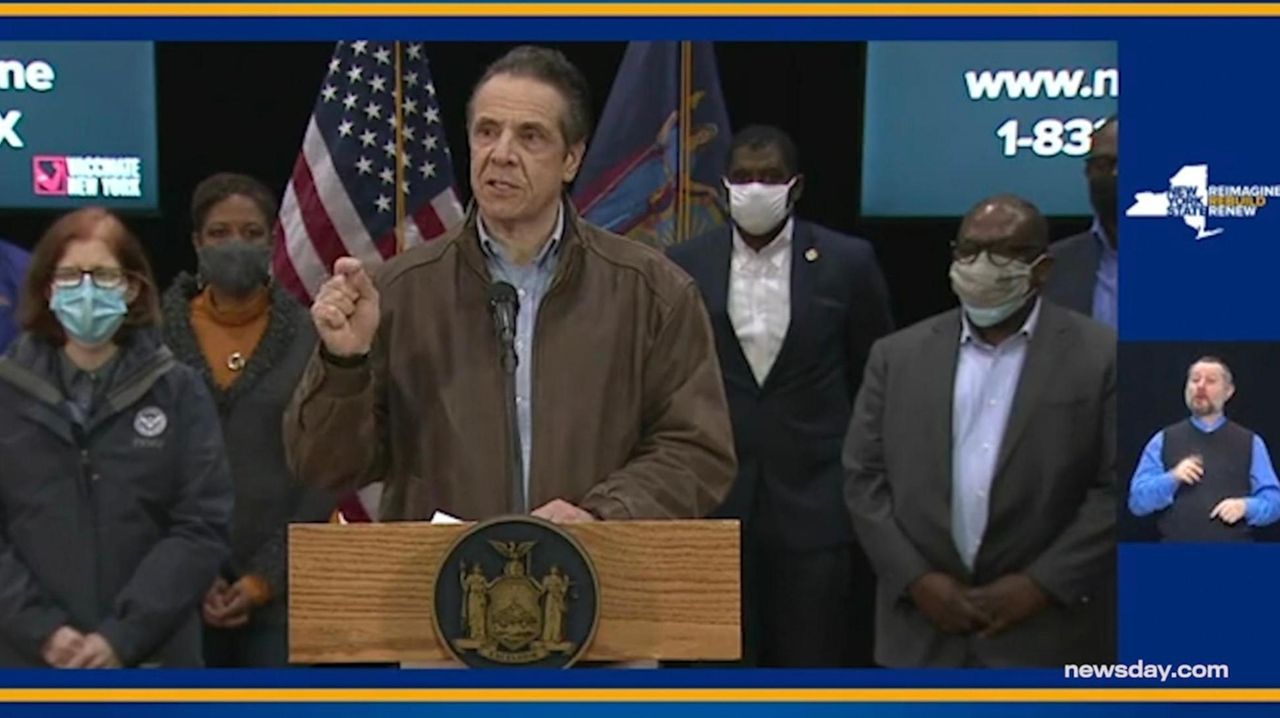 Earlier this week, Cuomo pushed school districts to get as many students as possible back into classrooms for in-person instruction, and called remote instruction a poor substitute.

He ordered districts to start reporting to local governments how many students are receiving in-person instruction, and how often, as well as how many of their teachers are vaccinated. While he favors students getting back to regular classes, Cuomo said he understands the fears of teachers and wants as many vaccinated, as quickly as possible.

Meanwhile, New York City Mayor Bill de Blasio said Wednesday he hopes to announce in the next few weeks the timing of reopening public high school buildings, which have been closed since November in the boroughs.

"I am very hopeful, given everything we’re seeing, that we can get high school back and get it back relatively soon; it’s something I absolutely want to do in this school year we’re in right now," he said.

About 30,000 of the city's public school educators have been vaccinated, de Blasio said.

Michael Mulgrew, president of the United Federation of Teachers, sounded a skeptical note: "The UFT represents more than 120,000 teachers, guidance counselors, paraprofessionals and other school-based members. Even putting the most positive spin on the city's numbers, there are tens of thousands of staff who have not yet had access to the vaccine."

COVID-19 positivity levels continued to decline statewide, with a 2.85% daily rate from 216,813 test results on Tuesday, the lowest figure since Nov. 21, Cuomo said.

The number of new confirmed cases was 519 in Nassau County, 425 in Suffolk County and 3,363 in New York City. Hospitalizations declined by 101 patients to a statewide total of 5,876.

The state said 99 people died of causes related to the virus, including 11 in Nassau and six in Suffolk.

Nassau County will hold a "community vaccination day" in Elmont on Saturday, part of its strategy to target communities of color hit hard by COVID-19.

Nassau County Executive Laura Curran said the county is partnering with local elected officials, the school district and Northwell Health to provide 1,000 COVID-19 vaccinations to people who live or work in Elmont.

The event from 9 a.m. to 6 p.m. at the Elmont Memorial High School gym will follow state vaccine eligibility guidelines.

Cuomo on Wednesday opened a new coronavirus vaccination center at York College in Jamaica, Queens — one of two new sites aimed at providing what the governor called "not just access, but equitable access" for underserved communities.

The sites — the other is at Medgar Evers College in Crown Heights, Brooklyn — will be open from 8 a.m. until 8 p.m. daily. For the first week, they will serve only people in nearby communities.

"We're going to do a lot of good, we're going to save lives at this site," said Cuomo, who was surrounded by a group of local ministers, public officials and health care professionals.

State Sen. Leroy Comrie (D-Queens) received his vaccination to help open the facility at York College. Bishop Calvin Rice of New Jerusalem Worship Center in Jamaica said he had already received both of his COVID-19 vaccination shots, explaining: "We've seen what our communities look like fighting COVID without the vaccine and it's painful."

NY: Staff mishap renders some vaccine doses ineffectiveA staffer transporting syringes to tents where the vaccinations are administered added a hand warmer to a cooler carrying the doses  — which isn't protocol — after growing concerned the temperature inside the cooler was too low, the state said. How to get a COVID-19 vaccine appointmentWith limited supplies and constantly changing conditions, it can be difficult for Long Islanders to make an appointment for a vaccine. The resources here might help.  Watch: LI's doctors, teachers and more talk about COVID-19's impact on your life See the percentage of LIers who are fully vaccinatedCheck the latest numbers on how coronavirus has spread in your community.

1:47
Differences in key COVID-19 statistics tracked to how agencies record them
A third Pfizer shot? It's 'likely,' says CEO
34:06
COVID-19 continues to spread as people socialize more
1:35
For LI's vulnerable homeless population, a place to get vaccinated
Polls: Staffing, COVID precautions are hurdles to firms' growth
Should kids get a shot? Long Island parents differ on COVID-19 vaccine
Didn’t find what you were looking for?