This story was reported by Matthew Chayes, Lisa L. Colangelo, John Hildebrand, David Reich-Hale and Olivia Winslow. It was written by Colangelo.

The number of people testing positive for COVID-19 on Long Island topped 3% for the fourth day in a row as officials warned New Yorkers to think twice before joining large gatherings for the holiday season.

State figures show 4,797 new COVID-19 cases reported Wednesday, including 321 in Suffolk County and 322 in Nassau County. An additional 29 New Yorkers died from COVID-19 on Wednesday, bringing the state total to 26,055.

"COVID is raging nationally, setting record numbers of cases and hospitalizations with each passing day," Gov. Andrew M. Cuomo said in a statement. "While New York is doing better than just about any state in the United States, we are not immune from the national trend …(If) we stay smart through the holidays, through Thanksgiving, through Christmas, through Hanukkah, we'll keep it under control."

The positivity rate on Long Island was 3.4% on Sunday, the first time it topped 3% since May. On Monday it was 3.5%, followed by 3.3% on Tuesday and 3.1% on Wednesday. If the 7-day rolling average positivity rate remains above 3% for 10 days, parts of Long Island could be put into one of the orange zones under the state's micro-cluster plan.

That designation brings tougher restrictions such as closing gyms and other nonessential high-risk businesses and mandating schools operate remotely with no in-person classes.

On Wednesday, Cuomo ordered new restrictions on gyms, bars and restaurants with liquor licenses in an effort to stem the tide of new COVID-19 cases.

Those facilities must close at 10 p.m. each night. In addition, gatherings in private residences are limited to 10 people. The new rules go into effect at 10 p.m. on Friday.

"If, in the morning, any morning, we saw that we had unfortunately reached that 3% level on the seven-day rolling average — or higher — that school day would be completed, the next day’s school would be shut down, and everything will go all-remote," de Blasio said.

The seven-day average citywide was 2.6%, de Blasio said Thursday, citing a figure that has been climbing for weeks.

On Long Island, Nassau County Executive Laura Curran said the increased numbers appeared to be the result of social gatherings. 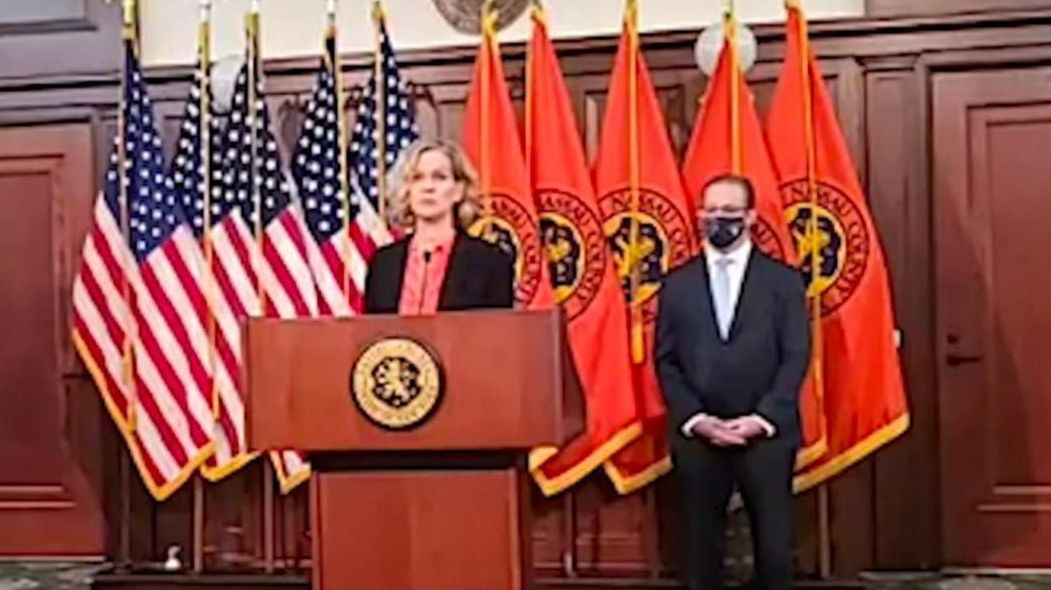 Nassau County Health Commissioner Lawrence Eisenstein said "virtually none" of the COVID-19 cases they had traced show the virus was transmitted in school buildings.

Northwell, the largest health system New York, said it had 237 COVID-19 patients at the 19 hospitals it owns and operates, up from 150 at the same period a week ago. It added 30 COVID-related admissions over the last 24 hours, about half of which were on Long Island.

East Islip school officials may postpone plans to expand in-school attendance by secondary students after six middle-school staffers tested positive for COVID-19. East Islip Middle School will be closed to its more than 700 students until Dec. 1 and remote instruction will be provided, district officials said.

Teachers and support staff will return to the middle school Monday, except for those directly exposed to the infected staffers, the district said.

In Port Jefferson, Earl L. Vandermeulen High School and Port Jefferson Middle School, which are physically connected, were closed Thursday to in-person learning after a middle school student tested positive, according to a letter posted on the district website Wednesday. The student had not been in school this week, the letter said. The schools will reopen on Friday, the district said in a letter posted later on Wednesday, and no other students or staff were exposed.

Students at Greenport High School, which encompasses grades 7-12, switched to remote learning Thursday after a student tested positive, according to a letter posted on the district website Wednesday. The student had not been in school this week, the letter said.

Halloween gatherings bring spike in Suffolk COVID cases, Bellone saysNew restrictions could result from the increase after residents gathered for small parties over a week ago, County Executive Steve Bellone said. See the latest news on the coronavirus, vaccinesKeep up to date with the latest on the global coronavirus outbreak.