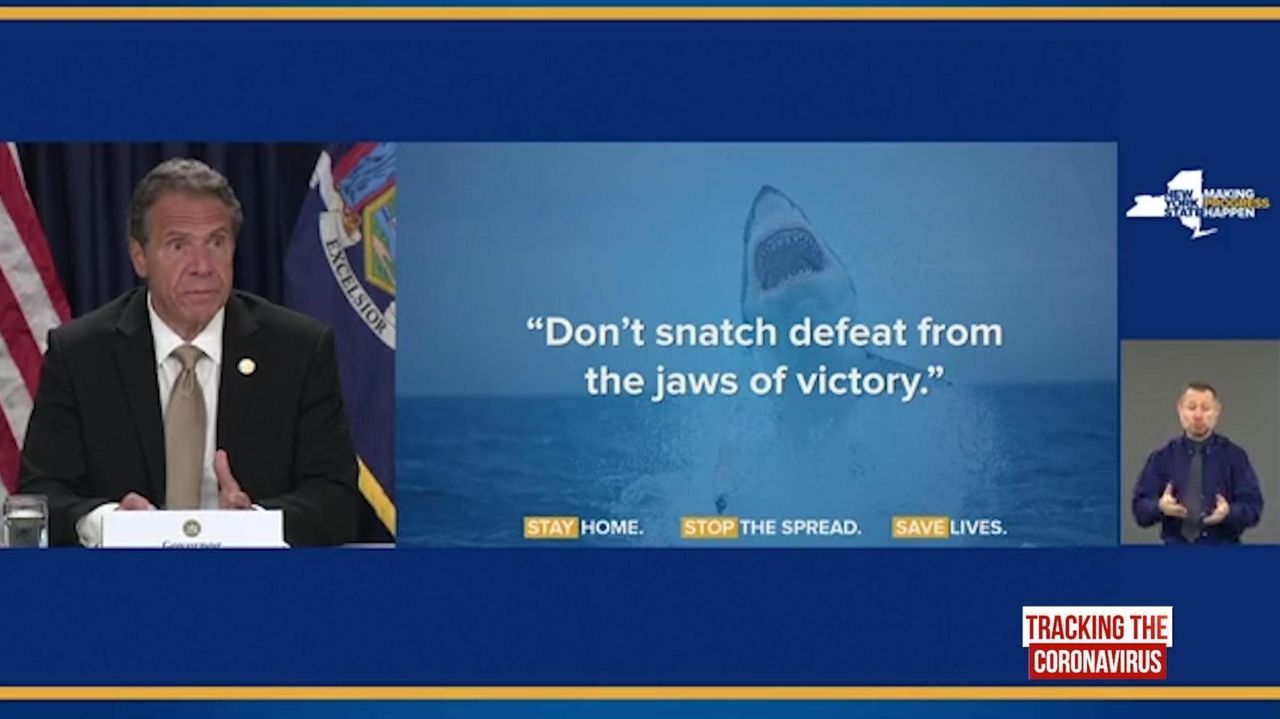 This story was reported by Rachelle Blidner, Candice Ferrette, Bart Jones and Michael O'Keeffe. It was written by Jones.

New York has reached one of its best moments yet in the battle against coronavirus, Gov. Andrew M. Cuomo said Monday, as the numbers of cases and deaths dropped to levels not seen since the start of the pandemic in March.

But the mass protests against police violence are endangering the “phenomenal” progress New York has made in controlling the coronavirus, Cuomo said, while still voicing support for the cause of the protesters angered by the killing of George Floyd in Minneapolis.

Hospitalizations due to coronavirus as measured on a three-day average reached "the lowest level" since the crisis started, said Cuomo, during his daily COVID-19 briefing in Manhattan.

The state recorded "the lowest numbers of death that we’ve ever had at 54," he said. "That number is dramatically different than what we’ve been looking at for many, many weeks." At the peak of the pandemic, in early April, the daily death toll was nearly 800.

He gave credit to state residents abiding by stay-at-home orders, social distancing guidelines and other measures.

"I am a lifelong New Yorker, but what they [New Yorkers] did was unlike anything I've seen," Cuomo said.

Despite the huge leap in testing, only 941 residents came up positive for the coronavirus on Sunday, he said, or about 2% of the total. That was the lowest figure since March 16, when the crisis was starting.

"So the progress is just phenomenal," Cuomo said.

The total number of people hospitalized across the state with the coronavirus, 3,331, was down sharply from the high of nearly 19,000 in mid-April. And the number of people newly admitted to hospitals because of COVID-19, some 170, was far below the peak of about 3,200, also in April.

Adding to that positive news, Cuomo announced that Western New York will move into Phase Two of the reopening on Tuesday, and the Capitol Region most likely on Wednesday. They join five upstate regions now in Phase Two, which includes the return of professional services, retail, administrative support, and real estate or rental and leasing.

Long Island started Phase One last week, and New York City — the only part of the state that has not started reopening — is expected to enter that first phase on June 8, Cuomo said. That phase includes construction, manufacturing, curbside retail or in-store pickup as well as wholesale trade, agriculture, forestry, fishing and hunting.

The state is divided into 10 regions. The reopening has four phases.

Nassau County Executive Laura Curran said Monday the county is on track to enter Phase Two. That could happen sometime next week, if Nassau follows a general timeline laid out by Cuomo. The county, Curran said, is “on the road to recovery."

With the progress threatened, Cuomo announced later Monday that he and Mayor Bill de Blasio are issuing an 11 p.m. to 5 a.m. curfew in New York City, starting Monday night. While Cuomo said he fully supported the grievances of the protesters, he questioned the wisdom of gathering in large groups amid a pandemic.

Curran said she planned to be on a Zoom call Tuesday with the Long Island Anti-Hate Crime Task Force to discuss community concerns.

“I see and hear the pain and the anguish that was let loose by George Floyd’s killing. Nassau County held peaceful protests on Saturday and Sunday. I will go to my grave protecting people’s First Amendment rights to express how they feel and whatever they feel the need to express. I’m hearing the anguish and hearing the despair,” Curran said.

“People are saying that this is the result of three months of pent-up emotion, but we also know it’s also the result of 400 years of racism,” she said.

In New York City, de Blasio discussed some of the challenges posed by the coronavirus crisis.

“Just a few days ago, what we were entirely focused on, all of us, was one of the greatest challenges this city has ever, ever faced, this pandemic, this painful, horrible crisis that has taken the lives of so many New Yorkers," said de Blasio, adding that he has heard from many city residents concerned "about their health, their kids, about the fact that [they] were running out of money or had not gotten checks from the federal government."

Cases of coronavirus continued to drop throughout the state.

The total cases reported in the state on Sunday was 941, according to data released Monday, for a total of 371,711 since the pandemic began.

In one sign of society returning to some semblance of normalcy, Suffolk County announced it is starting a drive-thru movie series at Smith Point Beach. The first movie: "Jaws."