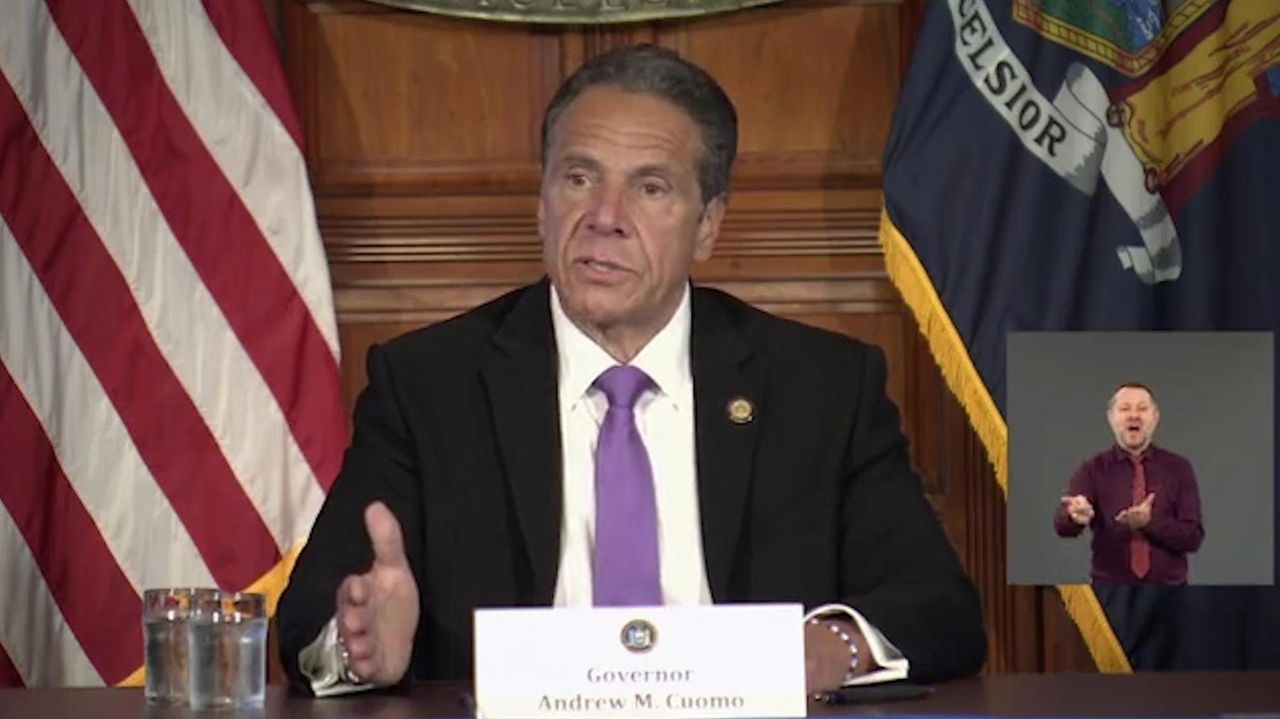 Gov. Andrew M. Cuomo on Tuesday said Mayor Bill de Blasio and the NYPD failed to do their job by not stopping widespread looting during peaceful demonstrations after the death of George Flynn in police hands. Credit: Facebook / Governor Andrew Cuomo

This story was reported by Alfonso A. Castillo, Zachary R. Dowdy, Scott Eidler, Ted Phillips, Bart Jones and Joie Tyrrell. It was written by Jones.

Despite massive street protests over the Minneapolis killing of George Floyd, New York State is making steady progress against the coronavirus, Gov. Andrew M. Cuomo said Tuesday, though he warned the gains may be lost if protesters are not "responsible."

He announced summer day camps will be permitted to open starting June 29, though the question of sleepover camps is still under review. He also had good news for people anxious to get back to their barbers or hair salons: He is moving those businesses up from Phase 3 to Phase 2 of the reopening process.

That appears to mean that as early as next week — when Long Island may move into the second phase — residents can go back to getting their hair clipped or styled.

The latest executive order allows automobile racetracks to reopen starting Wednesday, without fans or other visitors. Only people essential to the races will be permitted.

Cuomo spent most of his briefing Tuesday talking about the demonstrations, and urged protesters to avoid further spread of the coronavirus as they return to the streets en masse.

“Keep in mind during this moment when you are going out to protest, we are still in the middle of the COVID pandemic," he said. "We are going to reopen New York City this coming Monday. Yes, protest; yes, express your outrage. But be responsible, because the last thing we want to do is see a spike in the number of COVID cases.”

He said the state continues to curb COVID-19.

The number of coronavirus patients admitted to hospitals on Monday was at “an all-time low,” at 154, he said, far below the peak of about 3,200.

“Congratulations to the people of the State of New York,” he said. “Look at what you did. Look at the progress you made. God bless you.”

The daily death toll due to the coronavirus, 58, was “about as low as we have had,” he said, and compared to a peak of nearly 800 a day in early April.

“We’re doing very, very well when it comes to dealing with the COVID-19 crisis,” Cuomo said.

The number of new coronavirus cases continued at relatively low levels across the state, though Suffolk experienced a one-day jump in new positives, the latest state figures showed.

Buffalo and the Western New York Region entered Phase 2 of the reopening Tuesday, Cuomo said, and the Capitol Region will enter the same phase Wednesday.

New York City, the only region that has not started to reopen, is set to enter its first phase Monday, he said. Long Island's counties are working to clear hurdles to enter the second phase, which includes the return of professional services, retail, administrative support, and real estate or rental and leasing.

One Long Island religious leader, Bishop Ronald H. Carter, pastor and founder of the Refuge Apostolic Church of Christ in Freeport, urged people to be cautious if they protest.

"I understand the pain and the frustration of injustice,” he said at Nassau County Executive Laura Curran’s briefing. “Nobody wants to see someone brutally and unconscionably killed, like George Floyd was.

"Protest if you will, but please don't forget there is a silent deadly killer that is not yet subdued in this COVID-19, when you see the mobs, no masks, no gloves, many of whom have only one objective in mind, that is to destroy and to take something they have not earned," he added. "Say that you're angry. Protest if you will. But remember the pandemic is not over, let's keep that in mind."

Curran said the county is on track to start Phase 2 next week. She said she wrote a letter to Cuomo, urging him to permit real estate tours now, before they are officially allowed in that next phase.

"One week in real estate time is a lifetime,” Curran said. “We have a lot of folks looking to move here. It's less dense, more space. Connecticut and New Jersey is allowed to do this kind of work. Realtors selling homes, showing homes, rentals, et cetera, that's allowed to happen. I don't want to lose this potential for an economic bright spot for us to New Jersey and to Connecticut."

Curran said Nassau “continues to make great progress" in the fight against the coronavirus.

“That number popped out at me as soon as I saw it, of course,” he said, “because we have been significantly lower than that for some time. We like to see that number below 100. For many days, many days over the last few weeks, we’ve seen it significantly below 100.”

Meanwhile, the College Board on Tuesday asked colleges to extend deadlines to receive SAT scores and to equally consider students for admission who could not take the exam due to COVID-19. The College Board will not offer in-home, online SAT exams this year, but is providing additional test administrations beginning in August and will add a test date in January if there is demand.

No outdoor dining, for now

Locally on Long Island, Farmingdale has backed off looking for loopholes to allow Main Street restaurants to serve food outdoors before Phase 3 of Cuomo’s reopening plan.

Mayor Ralph Ekstrand said the village is applying to Nassau County for permission to close Main Street for outdoor dining when it is permitted again.

“We’re looking to do what’s allowed,” Ekstrand said. He is among a group of elected Long Island officials asking the governor to include restaurants in Phase 2 of the reopening. “We really believe that as the numbers [of COVID-19 cases] have gone down so favorably, the governor will allow outdoor dining,” he said.

On Friday, about 1,500 people came to the village’s restaurants, which had set up tables on the sidewalks, prompting Nassau County fire marshals to issue verbal warnings to restaurant owners that outdoor dining was not permitted.

Last week, Curran announced the county would streamline the application process for street closures to benefit local businesses such as Farmingdale’s restaurants on Main Street. A spokeswoman for Curran said last week the county considered a municipality providing tables for curbside delivery to be allowed even before Phase 3.

Ekstrand last week had considered sidewalk tables to be a kind of curbside delivery, but this week is instead preparing the village’s application to the county.

In a statement Tuesday night, Empire State Development Corp. spokesman Jack Sterne said: "We are reviewing outdoor dining and how it could be done safely within the State's phased re-opening process. Currently, however, outdoor dining is not allowed on Long Island, and it does not matter who owns the tables and chairs — as Farmingdale's experience on Friday proved, this is a recipe for mass gatherings that put public health at risk. The county is right to focus on cutting red tape to maximize outdoor space when the time comes, but the miscommunications surrounding this program risk undermining the great progress Long Island has made against this deadly virus."

The protests over the death of Floyd are altering Nassau's bus service, transportation officials said.

The Nassau Inter-County Express, or NICE, announced that, starting at 8 p.m. Tuesday, it was suspending all service to Queens each day while the New York City curfew remains in effect. The agency had announced Monday the temporary closure of its busiest hub, the Rosa Parks Hempstead Transit Center.

The Metropolitan Transportation authority that oversees train and bus operations in downstate New York is planning to ramp up service as New York City enters its first phase of reopening on Monday.

In a letter to city officials on Tuesday, MTA Chairman Patrick Foye said “subways and buses will return to full, regular service by day one of Phase One” of the reopening, after operating on a reduced plan since late March. There was no word Tuesday on when the LIRR, which has been running at about 70% of its usual weekday schedule, would return to full service.