Gov. Andrew M. Cuomo said New York State's strategy of targeting "micro-clusters" identified through testing data will continue through the fall, but the state needs to prepare to administer 20 million vaccines, possibly starting with the winter season. Credit: Office of the Governor

This story was reported by Rachelle Blidner, Robert Brodsky, Bart Jones, Michael O’Keeffe and John Valenti. It was written by Jones.

The effort to target those "red zones" or "micro-clusters" is yielding good results to the point that the state this week will "announce changes to the zones," currently under stricter limits for gatherings, schools and businesses.

The state reported a 1.1% positivity rate outside those zones and 3.3% positivity rate in the cluster areas Sunday. That marked a decrease from an infection level of 6.9% the week of Sept. 27 to Oct. 3. The red zones are largely in neighborhoods in Brooklyn, Queens and the counties of Rockland and Orange, but also touch parts of Nassau County.

Following a spike of new cases in Nassau's Five Towns area, County Executive Laura Curran announced plans Monday to open a rapid-testing site at the Five Towns Community Center in Lawrence, which has more cases per 100,000 residents than anywhere else in the county. 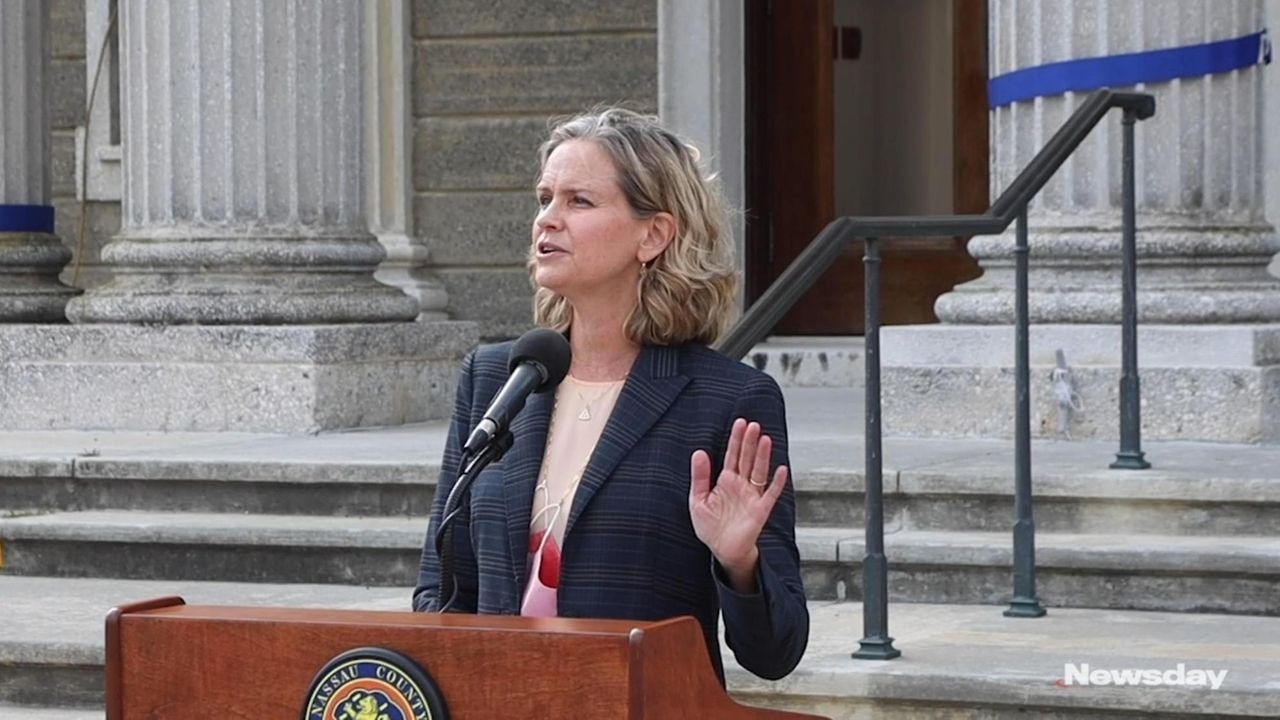 "We are all concerned that inaction allows a cluster to turn into an outbreak which not only causes more suffering to health, but could also impede the reopening," Curran said. "So we cannot roll the clock back on reopening."

Details about the drive-through rapid-testing site, where results would be available in 15 minutes, will be released Tuesday.

Overall, Cuomo said New York has been doing better than many other states because the high level of testing allows the state to respond to the "micro-clusters."

"The micro-cluster approach, first of all, targets the outbreak sooner and faster and tighter, and the restrictions are only neighborhood-wide," Cuomo said in a telephonic conference call with reporters.

"To give you an idea of the level of difficulty we are talking about," Cuomo said, over "seven months, all hands on deck," the state had to scramble to have the necessary coronavirus testing in place. "Everything we had, we threw at it … In seven months, how many tests did we do? Thirteen million."

Vaccinating everyone "is going to be one of the operational challenges of all time," Cuomo said.

Other states and the nation as a whole are in an even more difficult situation than New York with the vaccine, since they have done fewer tests per capita, he said.

The United States has completed 124 million coronavirus tests, but has 328 million people, meaning the equivalent of only one-third of the population has been tested, he said.

The hot spots in the state have included large ultra-Orthodox Jewish communities, where some residents have protested against the cluster restrictions. Those measures include shutting down schools and nonessential businesses, and limiting houses of worship.

Statewide, 14 people died of causes related to the coronavirus on Sunday, while the positivity rate was measured at 1% on Long Island and 1.3% in New York City. The number of new cases was 61 in Nassau County, 51 in Suffolk County and 419 in New York City.

Curran attributed an uptick in the county’s overall numbers to cases among high school and college-age students.

She noted a cluster of 60 positive cases reported on the campus of LIU Post in Brookville have been traced to off-campus social activities, including by members of several athletic teams.

"I am absolutely concerned with the cluster and the numbers," she said.

But Nassau Health Commissioner Lawrence Eisenstein credited the decision of the university’s administration last week to shut down in-person classes for two weeks.

"They didn’t wait till they had 100 cases," he said. "They were very proactive and did a fine job."

In Suffolk, County Executive Steve Bellone said the 51 of 5,554 people who tested positive over the last 24 hours put the county's percent positive just below 1%: "So our positivity rate remains in a very good place."

New York City’s hard-hit restaurants may not be able to reopen at 50% indoor dining capacity on Nov. 1, Mayor Bill de Blasio said Monday, citing the increase in cases in parts of Brooklyn and Queens.

The mayor said the city will work with state officials during the next two weeks to determine if restaurants can expand indoor capacity from 25% to 50% as scheduled.

"It’s just premature now to project," de Blasio said. "We need to get farther up the road, and we need to work with the state on that."

Restaurants on Long Island and other parts of the state were permitted to open indoor dining at 50% capacity on Sept. 30, but Cuomo limited capacity to 25% in restaurants in the city — once the global center of the pandemic. Cuomo later said New York City restaurants could expand indoor seating to 50% capacity by Nov. 1, if there was not a significant increase in the state’s infection rate.

On Monday, de Blasio said cases had leveled off in some Brooklyn and Queens hot spots, and that "particular progress" had been made in central Queens. The mayor said restrictions could be lifted in central Queens in upcoming weeks.

Brooklyn neighborhoods among those shut down by Cuomo due to increases in COVID-19 cases have large ultra-Orthodox Jewish populations. Some community members flouted coronavirus restrictions earlier this month as they celebrated Sukkot on Crown Heights streets, ignoring NYPD orders to disperse. New York State health officials have shut down an ultra-Orthodox wedding planned for Monday night that could have drawn as many as 10,000 guests to Williamsburg, Brooklyn.

De Blasio said he was "heartened" by the decision by the family of the influential Rabbi Zalman Leib Teitelbaum, whose grandson is the groom, to limit the service to close relatives and to broadcast the event online — but the NYPD and other agencies will be on hand to enforce social distancing and coronavirus restrictions.

At Berner, distance learning will remain in place all week because a student who tested positive for COVID-19 "had greater contact with students and staff," officials said in a note.

The Connetquot school district said in emails to parents that a staff member and a student from different schools tested positive. One is a student at Connetquot High School in Bohemia who will remain in home in isolation, though the student had not been in school since Oct. 13, after a relative tested positive. The other positive was a staff member at Cherokee Street Elementary School in Ronkonkoma who has been quarantined and was last in school Oct. 9, the district said.

The Sylvan Avenue Elementary School of the Bayport-Blue Point school district will be closed to in-person learning Tuesday after a staff member developed a positive case of COVID-19, according to a letter from the school superintendent. Distance learning will continue, the letter said.

List: COVID-19 cases reported in LI schoolsStudents, teachers or staff have tested positive for the coronavirus at schools in dozens of Long Island school districts. Here's a roundup. Watch: LI educators discuss school and COVID-19 Sign up for The Classroom, our education newsletterCoronavirus is changing education on Long Island. You have questions. We have answers. Sign up for The Classroom newsletter. See what percentage of people around you are fully vaccinatedSee vaccination rates by ZIP code, and more COVID-19 data.