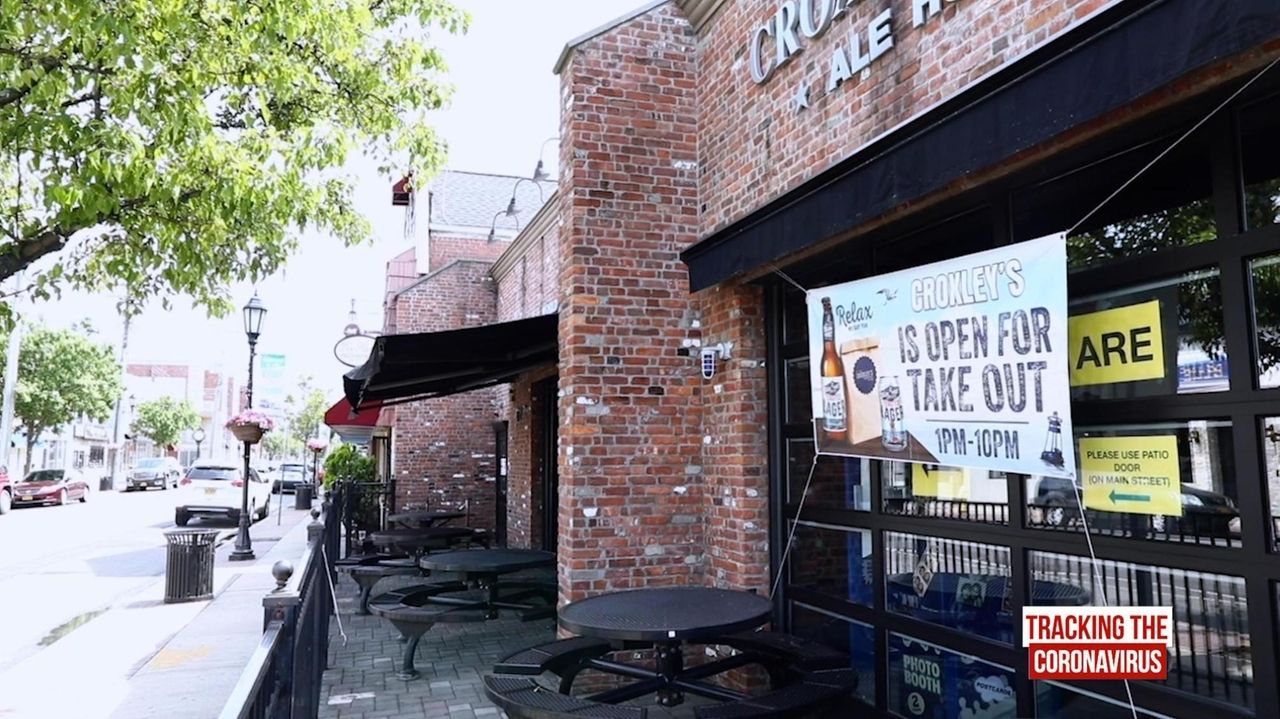 With phase 2 of reopening scheduled for next week, Long Islanders on Thursday talked about being able to enjoy outdoor dining. Here is Newsday's Steve Langford with the story. Credit: Newsday staff; YouTube / NYGovCuomo

This story was reported by Rachelle Blidner, Alfonso A. Castillo, Scott Eidler and Bart Jones. It was written by Jones.

Medical schools in New York will be able to reopen June 22, Gov. Andrew M. Cuomo said Thursday, but for now there will be no large high school or college graduation ceremonies — just the "drive-thru" or "drive-by" kinds that have become common in the coronavirus era.

Cuomo made the announcements as he confirmed that Long Island will take its step in returning to life after the shutdown on Wednesday, as it enters Phase 2 of the state's reopening plans. That will allow a wider range of businesses, including offices, to get back to work, along with outdoor dining, a business activity he decided to fast-track this week.

With massive street protests and looting breaking out throughout the state after an unarmed black man died while in custody of Minneapolis police, Cuomo said the progress made against the virus could be lost if state residents are not cautious about avoiding exposure.

New York is "making great progress" with decreased infections and hospitalizations and a death toll that has fallen precipitously from the disease's peak, he said.

Cuomo noted that on Long Island, the number of people testing positive for COVID-19 dropped from 20% to 2% over the last six weeks.

“This is all a function of our behavior, nothing more, nothing less,” Cuomo said during his daily briefing from Albany. "Reopen with caution. Why? Because we’ve seen too many examples … where it boomeranged.”

In another sign of the slow march toward some normalcy, Cuomo said medical schools statewide can reopen later this month to allow them to safely prepare for the new classes this summer and fall.

The schools will be required to take “appropriate precautions” as they reopen, he said.

While expressing support for the protests against the killing of George Floyd, Cuomo again voiced concerns about mass demonstrations during a pandemic.

He said protesters could compound the virus crisis and asked for them not just to take preventive measures, but also to assume they have been exposed to COVID-19 and get tested.

County Executive Laura Curran confirmed that Nassau is on track to start Phase 2, with "full retail, hair salons and barber shops" expected to open. In Phase 2, administrative and office-type jobs, vehicle sales, and real estate, including leases and rentals, are to resume as well.

"We really do need to get this economy back, we need to get people back to work, and we need to reopen our society. We're getting there," Curran said.

Long Island has been in Phase 1 for more than a week, seeing a return of construction, manufacturing, wholesale trade, agriculture, forestry, fishing and hunting, as well as retail for curbside, pickup and delivery. New York City remains on track to enter its first phase of reopening on Monday, Cuomo said. 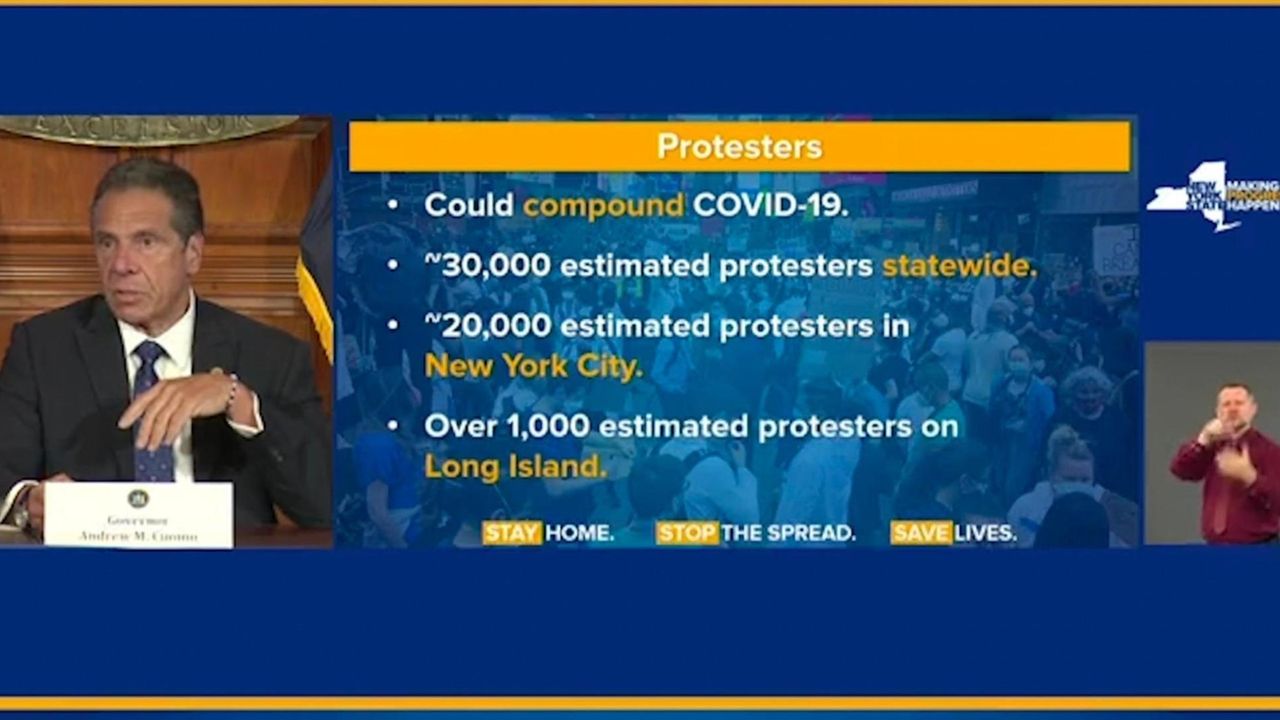 Cuomo: If you went to a protest, go get tested for coronavirus Gov. Andrew M. Cuomo on Thursday urged protesters to get tested for the coronavirus. Cuomo is concerned that due to the lack of social distancing, it could create a hot spot. Credit: NY Governor's Office

During an appearance on Long Island News Radio with Jay Oliver on Thursday morning, Cuomo said a decision on whether summer sleep-away camps will be held was still about a week away.

He said he wants to gather as much information as possible on a pediatric inflammatory illness that’s been linked to the coronavirus that has stricken at least 199 children, teenagers and young adults in New York and elsewhere.

Cuomo announced this week that summer day camps will be permitted to open starting June 29.

“It’s one of those real moments in life, going to a college graduation or a high school graduation,” he said. “So not to have the graduation is painful. I get it. As soon as we can do it, we will.”

But he said public health concerns must override the desire for graduation ceremonies.

“The issue is a public health issue and you don’t want people sick and dead,” he said.

At least one politician said he wants to change the policy.

"Our high school graduates have had a nightmare of a year and deserve a proper graduation," said state Sen. Todd Kaminsky (D-Long Beach). "My senate colleagues and I will continue to push for that, and there is good reason to believe that if we keep the virus on the decline, a reevaluation of this issue will result in the holding of in-person graduations later this summer."

Moving 'in the right direction'

New cases of coronavirus continued at relatively low levels on Long Island and throughout the state.

The daily death toll statewide, 52, continued to stay at levels far below the peak of nearly 800 a day in early April, according to state data released Thursday.

The total number of people hospitalized for the coronavirus, 2,849, continued to drop and was a fraction of the nearly 19,000 at the height of the pandemic in New York State.

“I have every day been hoping to see that number get down to zero. Today we are as close to zero as we can,” Bellone said.

Citing a recent report that Suffolk could face a deficit of up to $1.5 billion over three years, Bellone said he has told all departments — including health, public works and parks — under his office to look for 5% cuts ahead of the 2021 budget, which is typically proposed in September. He said those cuts in discretionary spending could total $60 million in savings.

As New York City moves toward reopening, the Metropolitan Transportation Authority called for an additional 60 miles of dedicated bus lanes across the five boroughs to accommodate an anticipated surge in bus ridership.

In a letter to Mayor Bill de Blasio, New York City Transit Interim President Sarah Feinberg said “a robust transit system” will be critical as workers return. “It will also help alleviate crowding on the streets and underground.”

While not addressing the request, de Blasio, praised the MTA for “doing some of the right things for sure,” but said he wanted them to do more, including “common sense” measures to protect workers. “And we’re willing to help them,” he said.