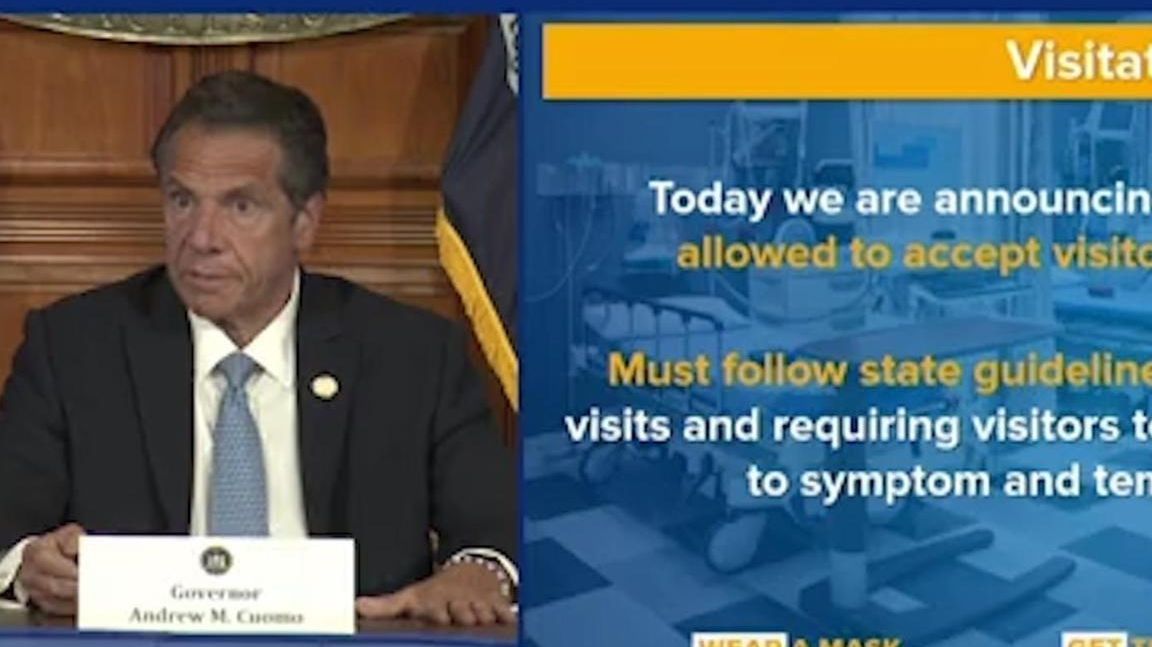 Gov. Andrew M. Cuomo on Tuesday announced hospitals and group homes can allow visitors at their discretion as long as they follow guidelines to prevent exposure to the coronavirus. Also, he said, the U.S. Open in Queens will be played from Aug. 31 to Sept. 13 with no fans in attendance. Credit: Facebook / Governor Andrew Cuomo

New York will permit visitors to hospitals and group homes, but not nursing homes, Gov. Andrew M. Cuomo said Tuesday, as the state continues to see a low level of new coronavirus infections.

He also announced the U.S. Open tennis tournament will take place in Queens from Aug. 31 to Sept. 13, though to prevent potential exposure or spreading of the virus, fans will not be allowed. The USTA, the national governing body for the sport, will take extraordinary precautions to protect players and staff, he said.

The visitations to hospitals and group homes will be at the discretion of each institution, and subject to state guidelines such as temperature checks, and wearing masks and other protective gear, Cuomo said.

“This was always a balance of public health versus the personal relationships, and people were in hospitals who desperately want to see loved ones," he said. "Obviously, we need to be careful." 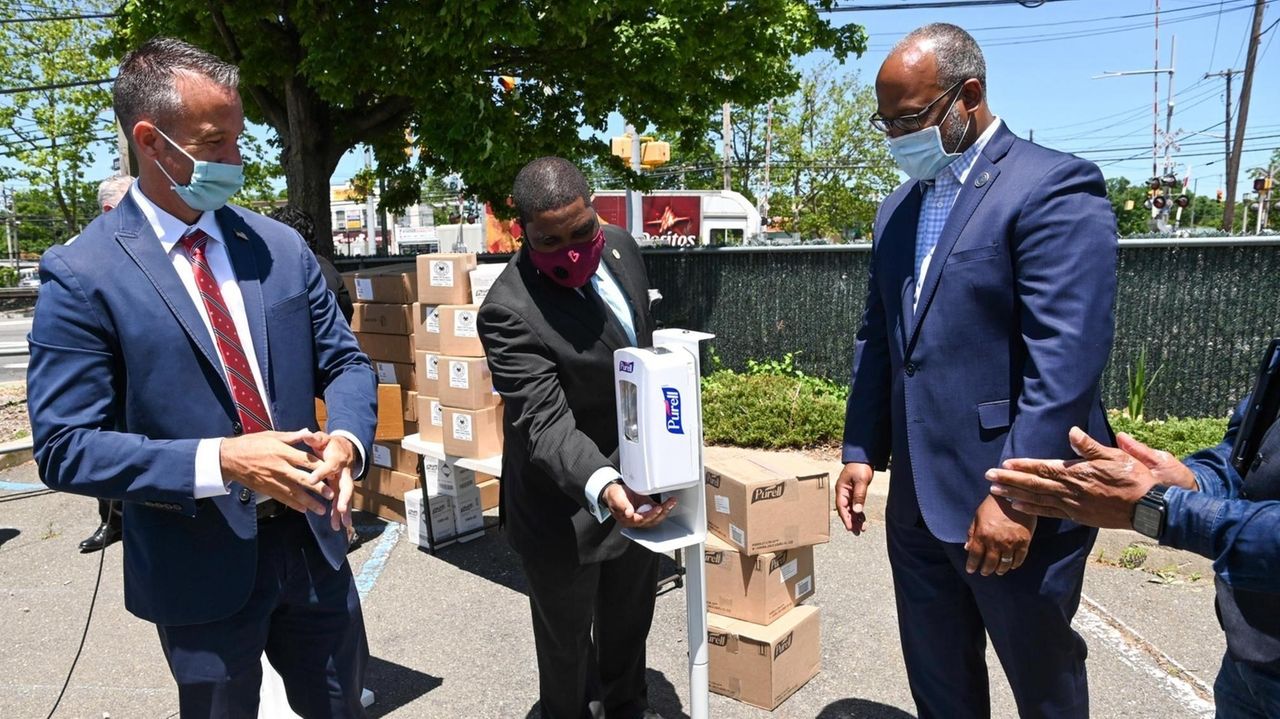 Babylon providing PPE to businesses The Town of Babylon, in partnership with the Babylon Industrial Development Agency, will be providing personal protective equipment to businesses. Credit: James Carbone

The facilities must inform the state if they are allowing visitors, he said.

On nursing homes, Cuomo said, “We’re still studying it. There is still a high risk. When the Health Department advises me it that it is safe, we’ll do it.”

Suffolk County Executive Steve Bellone called the state’s decision on hospitals and group homes an “important move” for families that have been through intense turmoil and anguish.

“This is a big step forward and an important step forward for so many families,” Bellone said. “It’s a much better situation for people’s health and their mental health and emotional health. It’s a great thing.”

Metrics on the virus continue to be encouraging and indicate the phased reopening by region is working, Cuomo said.

"Today, New York State has the lowest rate of transmission of any state," said Cuomo, speaking from Albany. "These are not theories any more. These are undeniable facts."

Long Island's coronavirus test results yielded 1% positives on Monday, while New York City was at 1.2%, according to state data released Tuesday. The overall state percentage of new infections was 1.05%. Of 60,568 people tested in the state, 631 were positive for the coronavirus.

Cuomo announced that the Capital Region would be entering Phase 3 of the state's plans to exit the shutdown, reopening its food services and personal care businesses. Long Island remains on Phase 2, and New York City is on Phase 1.

Long Island Association president and CEO Kevin Law also said he's hopeful Phase 3 could come as soon as next week, but cautioned: "We need to make sure we don't backslide."

'Long Island we have to watch'

In addition to the daily monitoring of new cases, the state expanded its antibody testing efforts to gauge the extent of the virus's spread, Cuomo said. The latest round of 12,000 random samples across the state taken from May 1 to June 13 yielded an increase of 1.1 percentage points in positive cases, with 13.4% of those tested found positive for the antibody. That signaled they had been exposed to the virus.

On Long Island, 14.1% of those tested were positive, compared to 11.4% by the beginning of the study. That increase of 2.7 percentage points was among the highest in the state, leading Cuomo to say: "Long Island we have to watch."

“These numbers are telling and are significant, because we’ve watched the numbers … these are numbers that local communities should pay heed to,” he added.

The state tallied 1,538 hospitalizations and 25 deaths linked to the coronavirus on Monday, indicating steep declines in those measures.

The overall number of new confirmed cases of coronavirus reported in the past 24 hours also remained at low levels, not seen since the start of the pandemic. Nassau had 50 new cases, and Suffolk had 46, according to state data released Tuesday. New York State registered 631 total new cases, including 332 in New York City.

Curran said the percentage of people testing positive in Nassau “continues to hover at about 1%, so that’s good news. Not so good news is we have a blip in terms of hospitalizations." The number increased by five to 108. “Of course, this is a number we’re watching carefully. We’ll see if it is indeed just a blip.”

“If we continue down this path with very few testing positive, we should be able to enter Phase 3 of reopening” on June 24, Curran said, noting that indoor dining, nail salons and massage parlors and other personal services would be able to reopen.

Nassau residents, Curran said, “You are doing a fantastic job in wearing the mask" and the personal protective equipment. "I see people are wearing them … this is the key to safety, right here."

In New York City, Mayor Bill de Blasio said “we continue to take action” against venues such as bars that violate government-mandated restrictions on public gatherings.

He said the impact of street protests on the spread of the virus was not yet known, and the city and state will need more information before deciding if the city can move to Phase 2 on June 22.

Among area hospitals, Northwell Health on Tuesday said COVID-19 volume at its hospitals continues to fall, although the rate of patient decline has slowed. Northwell, the largest health system in the state, said it had 356 COVID-19 patients at the 19 hospitals it owns and operates, down 11.7% from the same period last week.

Speaking at a Newsday webinar, Law said the keys to progression will be "the three Ts" — testing, tracking and tracing — and that social distancing practices will play a critical role, keeping transmission and infection rates down.

But, he said, though all businesses are required to file a plan with the state, and have one on hand for inspectors, being safe shouldn't be a one-way street.

"Back to work does not mean back to normal, reopening does not mean back to the way things used to be before March 20th," he said. "There are all these knuckleheads out there who don't think the rules apply to them … I think we all need to take this responsibility upon ourselves and don't put all the burden on the business owner to be the mask police."

Even those hopeful for Phase 3 and 4 reopenings should understand they will not come without a new normal, he said.

"I don't see the state, the country, the world moving away from masks for some time" — likely until a vaccine is in place, Law said. "I see people wearing masks well into the implementation of Phase 4."