This story was reported by Rachelle Blidner, Matthew Chayes, John Hildebrand and Bart Jones. It was written by Jones.

Restaurants and bars in New York City that violate social-distancing directives and other coronavirus mitigation measures will be shut down after three violations, and can be closed immediately for "egregious" offenses, Gov. Andrew M. Cuomo said Thursday.

State officials have investigated more than 5,000 establishments, most of them downstate, and found widespread lack of compliance with orders aimed at keeping the coronavirus under control, he said. The "three strikes" rule will be expanded to other parts of the state if significant noncompliance crops up.

“It’s wrong, it’s dangerous, it’s selfish, it’s unacceptable, it’s also illegal," Cuomo said. “New Yorkers are outraged at these establishments. We’re getting thousands of complaints, pictures, videos, et cetera. This is a question of public health, and New Yorkers paid a dear price for COVID, and they are equally upset with these violations.”

Cuomo announced other steps beyond what he called the "three strikes and you are closed" edict, including making it illegal for bars or restaurants statewide to serve people alcohol if they are not also ordering a meal.

He said some restaurants have essentially turned into bars, with people mixing freely.

“If you’re not eating a meal and you're just drinking, then it’s just an outdoor bar, and people are mingling and they’re not isolated in individual tables, and that’s what we’re seeing,” he said.

He and other top state officials said "bar serve" — that is, people walking up to a bar, ordering a drink, and potentially lingering about — will be prohibited going forward.

Bar service will be limited to "seated patrons who are socially distanced by 6 feet or separated by physical barriers," Cuomo said in a statement. The measure applies statewide.

The state will post the names of businesses that violate the orders, he said. 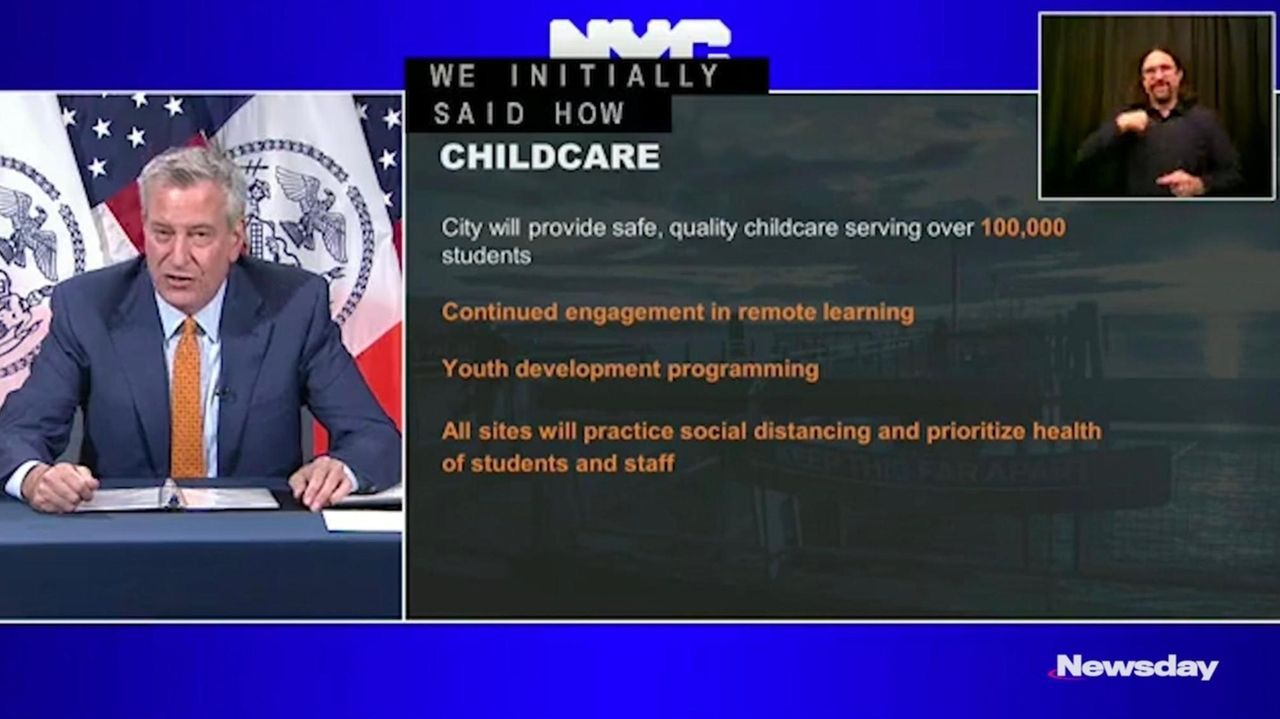 De Blasio: Child care to be available for 100,000 kids by September Mayor Bill de Blasio announced on Thursday that there will be 100,000 slots available for New York City preschoolers, and those in kindergarten through eighth grade, who will be offered government-funded child care on days when students are scheduled to be learning remotely but whose parents can’t stay home with them. Credit: NY Mayor's Office

Cuomo said a new report from the Centers for Disease Control and Prevention was an indictment of what he called the federal government's failure to properly handle the pandemic.

"The CDC just put up a report that is a stunning admission of the federal government's failure to adequately diagnose or address the COVID virus," Cuomo said. The report "says that although travel restrictions are an important mitigation strategy, by the time the European restrictions were implemented, importation and community transmission had already occurred in New York. The virus came to New York — not from China, but from Europe."

As the virus spreads elsewhere, there's potential for a resurgence, he said.

Such "a second wave" in New York could result from "a rebound of COVID from the other states" that also reflects failed federal policy. "It will have been a double-barrel shotgun of federal incompetence."

In discussing a travel advisory that mandates travelers from a list of high-infection states to self-isolate for 14 days if they come to New York, Cuomo said there is a 92% compliance rate with travelers from high-infection states filling out mandatory forms at airports stating where they will observe the quarantine, though he acknowledged the state can't fully control who enters its territory.

"This is a total new function for state government. You have no border control," Cuomo said.

He warned travelers could get caught if they violate the quarantine requirement. "You can speed, yes, but if you get caught, you get the ticket … You are running that risk."

His advice: "Don’t even think of violating quarantine.”

How to reopen schools

Meanwhile, the state Education Department on Thursday released 144 pages of instructions for school districts planning for reopening classes in the fall. Districts are to submit plans by July 31.

Cuomo said he will reach a final decision the week of Aug. 1 on whether to reopen schools.

In New York City, up to 100,000 preschoolers and kindergartners through eighth graders will be offered government-funded child care on days when students are scheduled to be learning remotely but whose parents can’t stay home with them, New York City Mayor Bill de Blasio said Thursday.

The city plans to open its public schools in September, with a “blended” learning model. Some students could be in school as few as two days a week, due to limited space and the need to require social distance between pupils.

New York City is likely headed into Phase 4 of its reopening on Monday, but Cuomo said indoor activities such as malls and cultural institutions will not be permitted in that phase in the city, unlike other regions that have entered that final stage.

"We are still seeing issues” with interior, air-conditioned spaces, including at locations throughout the country where the virus is spreading, he said.

Cuomo said the state is assisting Houston with establishing testing facilities and providing protective equipment, as that city sees a rise in COVID-19 cases. Earlier this week, he announced similar assistance for Atlanta.

Suffolk County Executive Steve Bellone said Thursday that case numbers are back to where they were before a “concerning” two-day jump this week on Long Island and separate instances of spread at social gatherings in the county. The number of new cases went back down to about 1% Wednesday and continued to track lower on Thursday.

“That is good news, two days in a row seeing those numbers be back in line to where we have been,” he said.

Suffolk also marked a fifth straight day of no deaths.

“That is something we have not seen since the start of this. This is the best news we could possibly have,” he said. “It’s a great day when we can say no one has died from COVID-19.”

Nassau County Executive Laura Curran also noted infection levels have "declined over the last three days and infection rates are once again below 1% — a trend that Nassau County is very much in favor of preserving through our robust testing and tracing programs.”

Bellone said the county has been doing its part to seek compliance with social distancing directives: “We have been enforcing every day. People want to know how many summonses and who have you closed down. When you send police officers to an establishment, that is a significant enforcement action in and of itself. When we have done that, as we do when get calls about violations, we have gotten compliance.”

Suffolk Police Chief Stuart Cameron said the department has been working with the State Liquor Authority, which has “a lot of authority we don’t possess. They can suspend or revoke liquor licenses, which would force them to close down, which they don’t want" after recent reopenings. "The dread of referring them to the [State Liquor Authority] carries a lot of weight with bars and restaurants.”

Cuomo said the state's coronavirus indicators remain at a good level, with 1.06% of those tested Wednesday confirmed positive for COVID-19, he said. Out of 72,685 people tested, 769 were confirmed to have the virus.

The daily death toll from the virus on Wednesday was 14. The state said 813 people with the virus were hospitalized, a net drop of 18 and far below the peak of nearly 19,000 patients in April.

1:49
Not all are ready to drop safety measures despite NY reopening
Hot Tips For a Hot Market: For Sellers
LI leisure sector led 1% monthly job gains in May
Low vaccination rates may be linked to college students
1:25
Employers can help ease workers' post-pandemic anxiety
29:58
Summer camp outlook: Sun, fun and, sometimes, masks
Didn’t find what you were looking for?