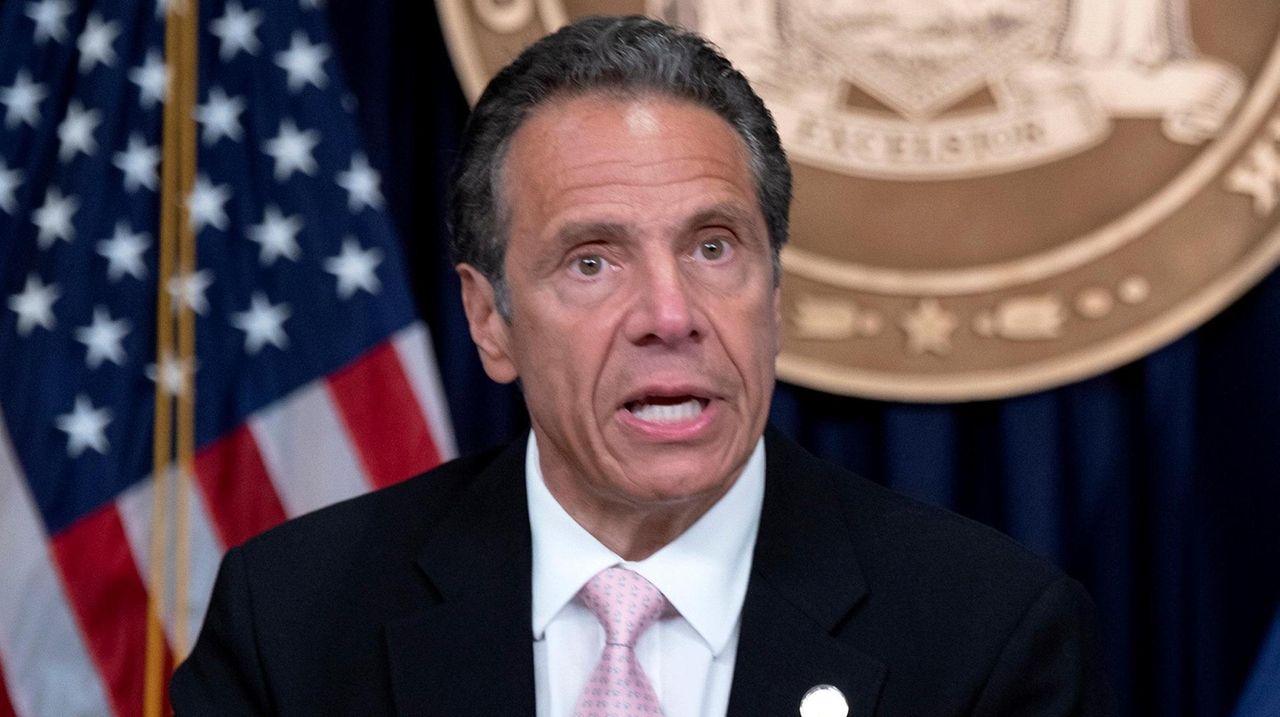 Gov. Andrew M. Cuomo said on Monday that indoor dining may not be safe to reopen during Phase 3 which is scheduled to start on July 6. Credit: NY Governor's Office, NY Mayor's Office

This story was reported by Matthew Chayes, Scott Eidler, Bart Jones, Tory N. Parrish and David Reich-Hale. It was written by Jones.

Gov. Andrew M. Cuomo said Monday the state is considering slowing down New York City's reopening and may delay indoor dining because of "troubling signs" of lack of social distancing and mask wearing, along with worries about travelers from hot spot states bringing the coronavirus.

He said air conditioning may be spreading the virus, too, and urged companies to install high-efficiency filters that can block small particles. Before they are permitted to reopen, large malls will be required to install the filters, he said.

Cuomo criticized the federal government for downplaying the urgency of the COVID-19 crisis and pushing a quick reopening of state economies. He called on President Donald Trump to issue a nationwide executive order to wear masks, and to put one on himself to set an example.

“How we are at this point as a nation and we still haven’t done the simple, easy, minimal step of saying you must wear a mask when you are in public" is inexplicable, Cuomo said.

He touted New York's progress in curtailing the virus while up to 32 states continue to see a spike in viral spread.

"It's time to wake up, America," Cuomo said. "The White House has been in denial on coronavirus from the get-go, and the federal response has just been wrong."

Cuomo said New York City is scheduled to enter Phase 3 of its reopening on Monday, which would normally allow limited indoor dining and personal care businesses, “but there are issues that we have to think through.”

One is the lack of social distancing.

Another concern is people traveling to New York City from states with high levels of coronavirus infection. They may bring the virus with them and threaten the progress New York has made, going from a global epicenter to one of the lowest levels in the nation, he said.

Outdoor dining has gone well in Phase 2 including in New York City, but “indoor dining has shown that it has been problematic, that a virus spreads in closed indoor areas that have air-conditioned systems,” Cuomo said.

He is reviewing data and talking with restaurant owners, businessmen, and city officials about what to do regarding indoor dining in New York City.

“This is a real issue,” Cuomo said. He will announce a decision on Wednesday

He said air filtration could be a major help for indoor businesses.

"There are air filtration devices, air filters, that can actually help with the COVID virus,” he said, adding that NASA has studied them.

Called HEPA filters, or High Efficiency Particulate Air filters, some “can actually filter out the COVID virus,” he said.

Malls, air conditioning systems and indoor spaces “have been problematic, and we think this offers promise," he said.

Owners of Long Island’s major malls did not respond to requests for comment on Monday.

Cuomo used visual aids to make some of his points, unveiling a Styrofoam mock-up mountain to represent the rise and fall of coronavirus cases in the state and displaying a photograph of Trump to urge him to take more decisive action. In the next photo slide, Cuomo showed a mask superimposed on Trump's face and the message "PUT A MASK ON IT!"

"If we are going to turn this around, it’s going to take the White House … If you want to help stop COVID-19, then they should start telling the people of this country the truth," Cuomo said.

Coronavirus indicators continued to show progress in New York State, where 0.84% of people tested positive for the virus on Sunday, state data released on Monday showed.

Some 391 people were confirmed new cases out of 46,428 tested on Sunday. The transmission level on Long Island was 0.7%, and 1.0% in New York City. Cuomo said the state’s goal is to keep the level below 1.0%. Many states are far higher than that.

Western New York has been cleared to enter Phase 4, the final stage of reopening allowing for the reopening of higher education institutions and some arts and entertainment venues, on Tuesday, Cuomo said.

He announced that the 2020 MTV Video Music Awards will be held in the Barclays Center in Brooklyn on Sunday, Aug. 30, “with limited to no audience.”

During a telephone interview with NY1's "Mornings On 1" news show, Cuomo told host Pat Kiernan: "Our numbers are good, very good right now, but there are troubling signs," mainly in New York City. "We still have large gatherings which are going on, which are not helpful. We went through the protests, and now we're seeing continued large gatherings. We're seeing large social gatherings on sidewalks, et cetera, which is not helpful."

New York City remains the only region in the second phase of reopening.

There were seven deaths from the virus in the state on Sunday. At the pandemic’s peak, the figure was nearly 800 a day.

The number of patients hospitalized with COVID-19 dropped to 853 across the state, the lowest figure since March 18, Cuomo said. At the pandemic’s peak, the figure was nearly 19,000.

Suffolk County Executive Steve Bellone said: “I am very happy to be able to report today that once again … I do have zero deaths to report from COVID-19 in Suffolk County.”

Over the past 24 hours, Suffolk had a 0.7% infection rate, which Bellone called “excellent, one of the lowest we’ve seen.”

Nassau County Executive Laura Curran said that over the last few days the percentage of people testing positive in Nassau dipped as low as 0.5%. “That’s really excellent news, and we’re testing a lot of people.”

On Long Island, Northwell Health on Monday said it only had three COVID-19 related admissions in the past 24 hours at the 19 hospitals it owns and operates, and none were in the five boroughs or Nassau County.

The admissions were at Huntington Hospital and Southside Hospital in Bay Shore.

Given quarantine orders for residents traveling from hot spots, Curran said residents should “consider a staycation. It might make sense to make the most of what we’ve got right here on Long Island."

Nassau County’s five pools will open this Friday, July 3, and a food truck system will be in place for people to text their orders. A runner will bring the food poolside.

Curran made a push for one-on-one personal training to be allowed to return from business shutdown. “I would argue that could be considered personal services, like massages or facials or nails."

He discussed limiting the city's move to the next stage of reopening.

“My view is, we can go into Phase 3 on all the other fronts. We can do that effectively. We can do the outdoor dining on a much bigger scale. But the indoor, we really need to examine closely.”

Even if indoor dining is allowed to resume Monday, there would be social distancing and other rules in place to limit virus transmission under city and state guidelines.