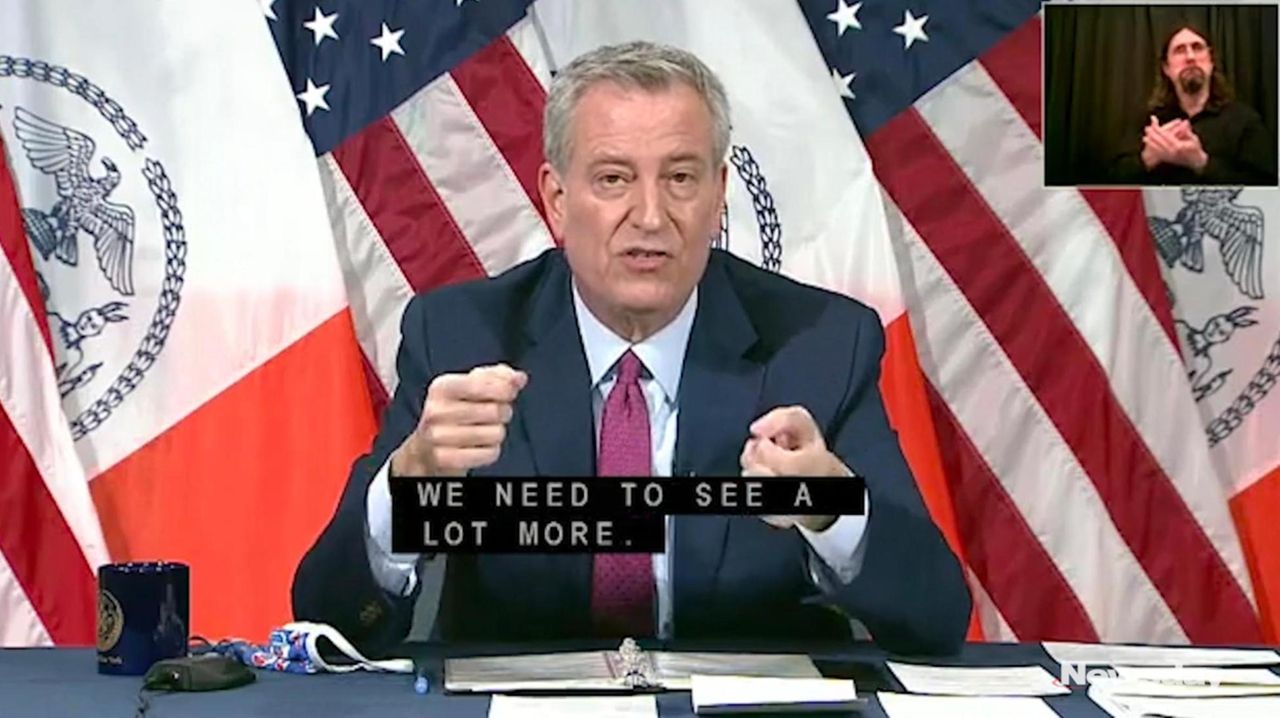 New York City Mayor Bill de Blasio on Thursday announced that 18,000 vaccine doses earmarked for long-term care facilities have been freed up by the state for injection into people who qualify for the shot because of age or having a job in the areas hardest hit. Credit: Ny Mayor's Office

The number of new COVID-19 cases across the state continued to increase, but at a much slower pace, officials said Thursday, while Republican lawmakers from Long Island called for lifting the ban on late-night dining as well as on residency restrictions on vaccinations in New York City.

They pointed out vaccination centers run by the state as well as Nassau and Suffolk counties administer COVID-19 shots to nonresidents. But sites operated by the City of New York are designated solely for eligible people who live or work in the five boroughs.

"Throughout this pandemic, the mantra has been, ‘We are all in this together,’ " Majority Leader Richard Nicolello said during a news conference in front of the county building in Mineola. "Apparently, the city leaders don’t believe it."

As of Thursday morning, people booking an appointment online or by phone must "certify under penalty of law that I live or work in NYC."

When asked about the Republicans' proposal, de Blasio spokeswoman Avery Cohen pointed to a shortage of vaccine across the nation.

"New York City sites should and will continue to serve those who live and work in our city," Cohen said.

Across the state, there were 13,398 new positive COVID-19 cases from 250,668 tests reported on Wednesday, resulting in a daily positivity rate of 5.34%, state figures show.

Although the seven-day positivity rate on Long Island has dropped in recent days, it remains the highest in the state at 6.7%, figures show.

"New York State is once again making our way down the mountain after experiencing a holiday surge," Gov. Andrew M. Cuomo said in a statement Thursday.

Cuomo said although the state was expecting more doses of the vaccine from the federal government, it was vital that New Yorkers continue to wear face coverings, follow social distancing protocols and avoid gatherings to prevent spikes in COVID-19 infections.

The statistics released by Cuomo and the state on Thursday show 1,251 additional COVID-19 cases in Nassau County and 1,301 in Suffolk County.

The state recorded 162 additional deaths due to COVID-19 on Wednesday, including 17 in Suffolk and seven in Nassau.

There are now 8,520 people in the state hospitalized with COVID-19.

Also on Thursday, Suffolk lawmakers joined with local restaurant owners to call on Cuomo to reverse his November executive order that bans bars, eateries and other licensed establishments from serving drinks and food on-site after 10 p.m. in an effort to stop the spread of COVID-19.

Currently, restaurants outside New York City can operate at 50% capacity, with 10 people per table maximum. Restaurants must close by 10 p.m.

At a news conference in Babylon Village, Suffolk County Legis. Kevin McCaffrey (R-Lindenhurst) said restaurants should not have a curfew because their environments were better controlled than private gatherings, where the spread of the virus had happened.

"We want to make sure that we’re keeping people in safe environments where there is some law and order, where the restaurant owners and bar owners are making sure that the people go by the rules and regulations," McCaffrey said.

Conor Hartnett, owner of Mary Carroll’s in the village, said that after the curfew was imposed, his employees, who are in their 20s, were getting invitations to house parties.

"You’re controlling the consumption of alcohol and then you’re trading that for going to a house party where obviously the wheels fall off," said Hartnett, a member of the Babylon Village Restaurant Association Committee. "The 10 [p.m.] is actually murdering the restaurants and bars."

Babylon Village Mayor Mary Adams said she was in favor of lifting the curfew because the spread of the coronavirus wasn’t happening in restaurants and bars.

Cuomo spokesman Jack Sterne declined to comment Thursday, pointing to the governor’s remarks made Wednesday about restaurants. Cuomo said the state would not change the curfew at this time because opening restaurants could be more problematic as there tends to be more crowding.

Because of the extreme cold weather forecast for Friday and Saturday, Stony Brook University has shut down its COVID-19 testing site at South P-lot both days. The site will be open on Sunday from 9 a.m. to 6 p.m.

More than 1.3 million doses of the COVID-19 vaccine have been shipped to New York since they became available in December, and more than 1.2 million people have received their first dose.

Suffolk has opened an additional vaccine pod site at the Suffolk County Community College campus gym in Riverhead, according to County Health Commissioner Gregson Pigott. About 2,500 doses of the Moderna vaccine have been administered — primarily to first responders and seniors. It received another 2,700 doses this week, he said.

In an effort to help frustrated county residents unable to make vaccination appointments, Suffolk officials have begun collecting the information of 311 callers and scheduling appointments for those who qualify as slots become available.

Nicolello said the Nassau County Legislature would hold a public hearing on vaccine distribution at 10 a.m. on Feb. 4. The public can submit comments via email to LegPublicComment@nassaucountyny.gov.

The county government wants to be adequately prepared when the vaccine supply increases, he said.

De Blasio said 18,000 COVID-19 vaccine doses earmarked only for long-term-care facilities have been freed up by the state to help inoculate New Yorkers who qualify due to age or their job. "We’re going to make sure those doses are used in the places hardest hit by the coronavirus," he said.

Three schools in the Hempstead will switch to remote learning until Monday, according to notices posted on the district's website. School officials said Front Street, David Paterson and Barack Obama elementary schools will follow a remote learning schedule due to key staff members being under quarantine.

In Westbury, the high school switched to remote instruction Thursday after a student tested positive for COVID-19 and was scheduled to reopen to in-person instruction Friday, according to a notice posted Wednesday on the district's website.

In addition, the Dryden Street school switched to remote instruction Thursday due to the high number of quarantined staff members. District officials planned to send a follow-up message when the school was ready to reopen, the notice read.

District officials also reported that a staff member tested positive at the sixth-grade annex, which is scheduled to remain under remote instruction until Tuesday.

Officials in the Sachem district reported that with three new confirmed cases of COVID-19 at Lynwood Avenue School in Farmingville, the district will continue distance learning through Monday and return for in-person learning on Tuesday.

Cuomo: NY lifting restrictions in former 'hot spots,' including on LIThe state is removing restrictions on businesses and gatherings in "microclusters" throughout areas that had seen higher spread of the coronavirus, including parts of Nassau and Suffolk.