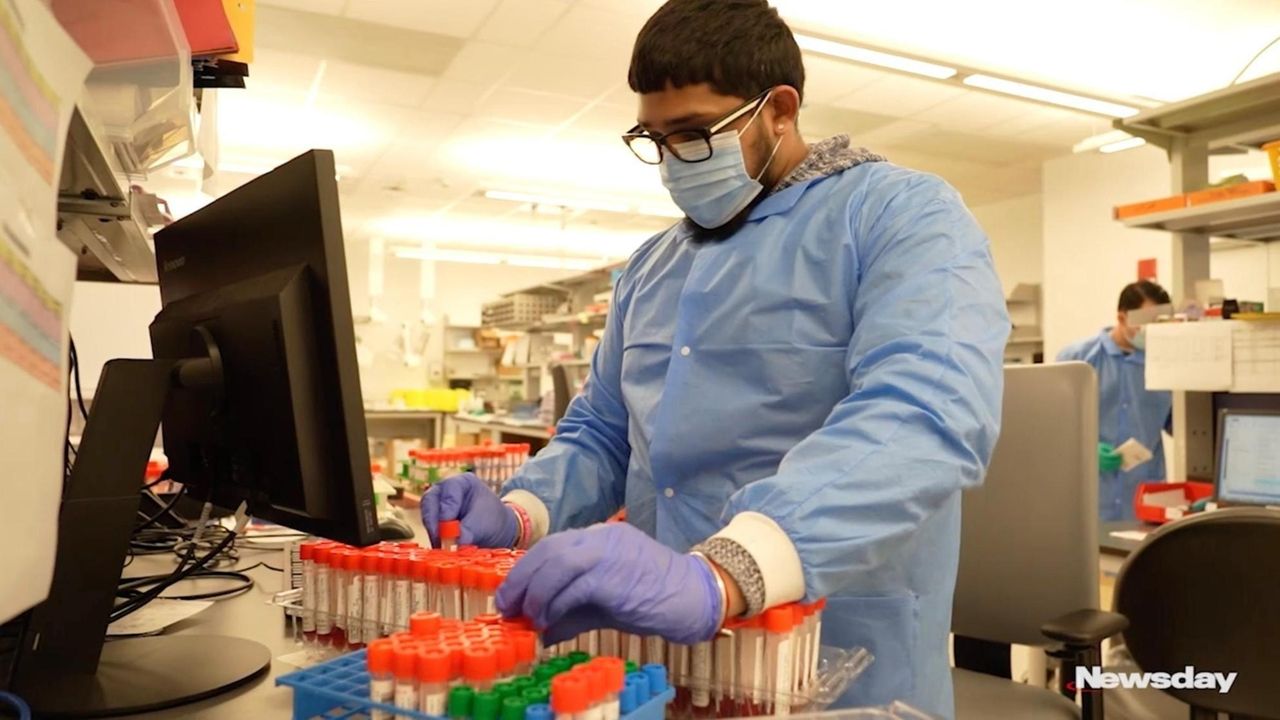 Dr. Dwayne Breining, executive director of Northwell Health Labs, spoke at a press conference on Tuesday about the increase in testing done by the labs since the pandemic began and how they are prepared in case there is another surge of cases. Credit: Corey Sipkin

This story was reported by Rachelle Blidner, Matthew Chayes, Jesse Coburn, Bart Jones, David Reich-Hale and John Valenti. It was written by Jones.

The county has averaged a 2.17% positivity level in the last week, a rate Suffolk has seen just once since June, Bellone said. The previous week’s average was 1.41%.

On Sunday the county also saw its first day with an infection level above 3% since May, Bellone said. That continued on Monday, when it was about 3.6%.

The numbers show Suffolk is no longer avoiding the surges experienced around the country after the county kept case totals low over the summer and early fall, Bellone said.

He warned that if the case numbers continue to grow, the county could face economic closures that parts of Brooklyn, Queens and areas upstate experienced under the state’s "micro-cluster" or "hot spots" strategy.

"If we do not get these numbers under control, we will threaten our economic recovery," Bellone said.

His warnings mirrored the trend across Long Island, where case numbers and positivity levels are on the rise.

The number of new confirmed COVID-19 cases on Monday was 278 in Nassau County and 280 in Suffolk County, far above the figures this summer when the numbers were regularly below 50. New York City saw 1,208 new confirmed cases in test results completed Monday.

Although positivity levels are rising in Nassau, County Executive Laura Curran said Tuesday: "I will do everything I can to keep our schools open. School buildings have not been a major vector of transmission in Nassau, and isolating children from teachers and friends is detrimental to both their educational and emotional growth."

In the hot spots or red zones, restrictions include shutting down schools and nonessential businesses, and limiting gatherings in houses of worship to 10 people. Concentric orange and yellow zones outside the red zones have less severe restrictions.

Northwell Health said it had 203 COVID-19 patients on Tuesday, compared with 191 on Monday and 144 a week ago.

But he said the biggest difference would be made by residents. He said people should get tested if they're not feeling well and should limit gatherings. If they attend any, they should wear masks, open the windows and socially distance.

He noted that a recent birthday party in Bellport with about 50 attendees resulted in 36 of them testing positive.

"That is a warning for us as we move further into the holiday season," Bellone said.

Those numbers make sense given that Halloween was a little more than a week before, he said.

The county’s current infection rate is well below Suffolk’s high of around 47% in the spring, when testing was more limited, according to health Commissioner Gregson Pigott.

There were 71 people hospitalized with COVID-19 in Suffolk hospitals on Monday, up from the average of around 20 patients in early fall.

Meanwhile, SUNY Albany is canceling in-person classes for the rest of the semester because of a rise in coronavirus cases, university president Havidán Rodríguez said.

The university decided Friday to conduct 3,400 COVID-19 tests following a "very concerning increase" in cases at the 17,000-student institution, Rodríguez wrote in a letter posted on the college's website. Of those tests, 3.3% came back positive.

Campus services and activities will be restricted, but the university expects students to remain on campus.

Longwood Middle School in Middle Island was closed Tuesday after a student tested positive for COVID-19, according to a message posted on the Longwood School District website.

It was not immediately clear how long the remote-learning schedules would remain in place at the three schools.

Long Island public and private schools had, as of Tuesday, reported 1,455 coronavirus positives since Sept. 8, up 363 cases from a week earlier, according to the state’s COVID-19 Report Card. Of those, 1,080 were students and 375 were teachers and staff. The statewide tally as of Tuesday was 4,861 students and 2,485 teachers and staff members for 7,346 who tested positive.

The seven-day average of cases was 795 as of Sunday, the latest available day. De Blasio called this "an area of tremendous concern." The rate has risen every day but one since late October.

Also "very worrisome" is the 2.88% positivity rate for Sunday, as well as the 2.31% rate for a seven-day average of cases, a more comprehensive figure.

If the rate goes above 3%, schools will suspend in-person instruction and businesses may see new restrictions, he said.