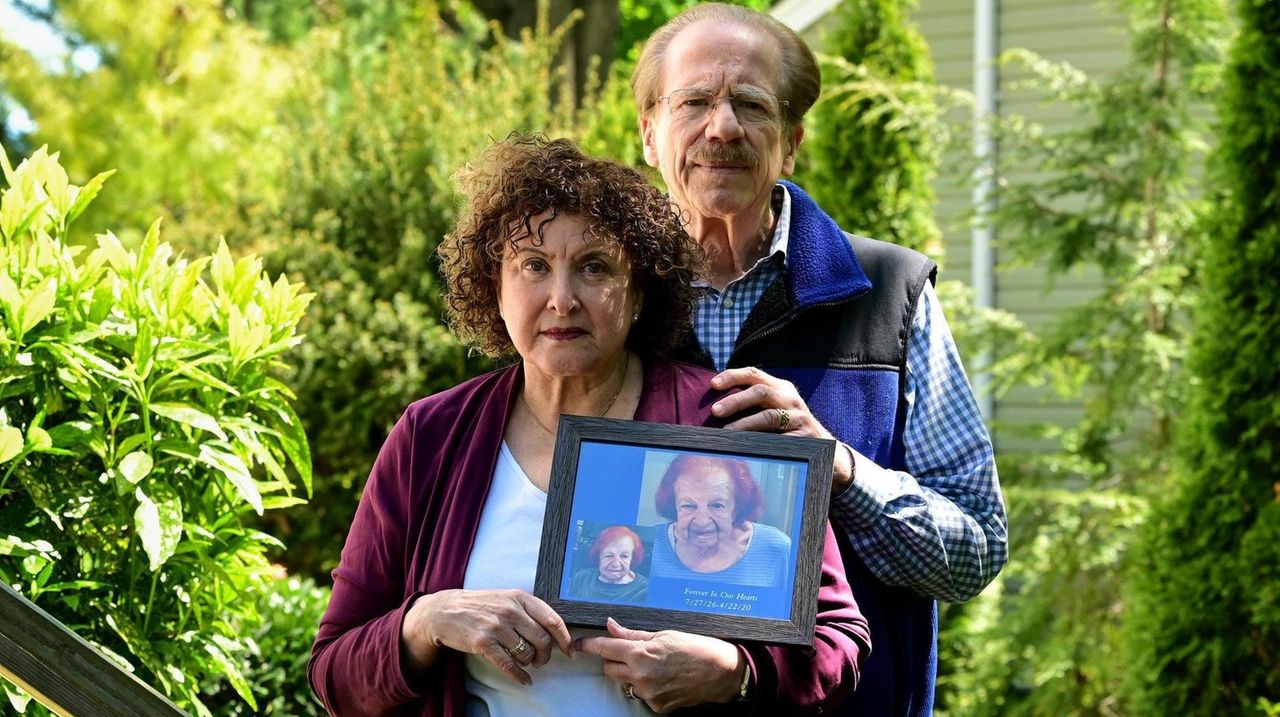 Madelynn Schwarz wore a surgical mask and wanted to hug her sister during their mother's funeral, but they kept their distance, an added pain to losing their 93-year-old mother to the coronavirus and the new normal for funerals.

Madelynn Schwarz held a white umbrella that cold, rainy morning as her sister shoveled dirt on their mother’s coffin, shortly after it was lowered into the grave.

They wore surgical masks, and, though Schwarz wanted to hug her sister, Debbie Wexler, they kept their distance — an added pain to losing their 93-year-old mother to the coronavirus.

Their mother, Roberta Landers, died April 22 at a Great Neck nursing home, one of many elderly victims of an invisible pathogen that has transformed how people face death. She was one of 21 seniors who died of illnesses related to COVID-19 at the Highfield Gardens Care Center of Great Neck, according to numbers released by the New York State Department of Health on May 13.

For Landers, there wasn’t the traditional service where her daughters could huddle with loved ones and friends, but instead a 35-minute video funeral over the Zoom videoconferencing app. There were no other close relatives with black ribbons pinned on their clothes at the cemetery in Fairview, New Jersey. There were only the two sisters, and their husbands.

“It’s tough. It’s even tougher, I think, without the family and friends," Schwarz said. "I saw my sister. … We couldn’t even hug each other."

Landers was also part of an astounding torrent of loss of elderly residents across New York State, where at least 5,398 people have died in nursing homes from coronavirus-related complications.

“Grief during regular, non-pandemic times itself is a painful, stressful, very overwhelming journey,” said Maribeth McKeever, director of bereavement for Good Shepherd Hospice in Farmingdale. “But with the coronavirus … we find that the grieving population is faced with a unique, complex and unprecedented challenge.”

On their drive home to Roslyn Heights, Schwarz and her husband, Tom, 75, picked up some bagels. They returned by themselves to an empty house to sit shiva, a seven-day Jewish tradition that normally brings mourners together.

The virus had taken that, too.

They quietly ate the bagels in the kitchen. Physically exhausted and emotionally drained, Schwarz went upstairs to her bedroom. After closing the door, she sat on her bed, put her hands over her face and softly cried.

On Long Island, more than 3,600 people are known to have died from COVID-19. About one out of three was a senior living in a nursing home.

The state's statistics, however, don’t tell the full story. They don’t tell who the people were. They don't tell about the loved ones left behind. And they don’t tell how thousands of Long Island families are mourning in isolation, struggling to grapple with the lasting emotional toll.

For Schwarz, the first call signaling trouble came April 1. At the time, she had not seen her mother in person for three weeks.

As positive cases of the new coronavirus surged in New York, Gov. Andrew M. Cuomo had suspended nursing home visits March 12, a step he later acknowledged was among the “harsh” measures to contain the spread.

Before the restrictions, Schwarz would see her mother at least once a week. They would sit together and she would rub her mother’s hands with cream.

The nurse who called told Schwarz that her mother had a 101-degree fever. The test for COVID-19 came back positive the next day. Schwarz prepared for the worst.

“To me, I think this is it,” she said April 2, the day she found out. “It’s just a question of hoping she [doesn’t have] a terrible end. And it goes quickly for her.”

Then came days when Landers seemed to get better. Her fever receded, and she breathed well, staff told Schwarz.

When she couldn't communicate with her mother, Schwarz found herself sending her mental messages, hoping the thoughts would miraculously reach her. She wanted to tell her mother to hang on.

One nagging question kept circling back: To fight for what?

Over the years, Landers had developed macular degeneration, an eye condition that left her nearly blind. She had been gradually losing her hearing. And about six years ago, she was diagnosed with dementia.

“In the end, she had no quality of life,” Schwarz said. “I guess the way I rationalize this is my mom has been gone for a long time. Her body is here, but her mind is gone.”

As the weeks went by, her mother appeared weaker and weaker, Schwarz said.

Landers had stopped eating and drinking. She coughed when Schwarz saw her on FaceTime. Her oxygen dropped to worrisome low levels. Except for the first call, she offered no responses beyond faint gesturing. Schwarz knew the end was near when the staff started using morphine to allay her pain.

Schwarz wanted her mother to die in peace and with dignity, so she said to her mother in mental messages: “Be at peace, mom. You are OK. We love you. You can let go. It’s fine. Don’t struggle.”

That night before bed, Schwarz sang in her mind for her mother, verses from “You’ll Never Walk Alone” from the Broadway musical “Carousel.”

When you walk through a storm

Hold your head up high

And don't be afraid of the dark

At the end of the storm is a golden sky

The ringing woke her up at 6:15 a.m. the following morning.

It had been three weeks since the initial call. A man on the other end said her mother had no pulse at 6 a.m. She couldn’t get any more information about when and how it happened.

“Truthfully, I think they just found her. I don’t think anybody was there,” Schwarz said. “She was by herself. She was alone.”

Officials at Highfield Gardens did not respond to requests for comment.

After she hung up from the call, Schwarz and her husband hugged for a long time. She had chills, so he put several blankets on her. Later, she had a quiet breakfast with Tom and waited to call the others. She didn’t want to wake up her sister and two daughters at the crack of dawn.

The funeral was set for two days later.

In the days of the coronavirus, funerals can’t just take place as they did before virus transmission became a concern. Mourners must think about social distancing, even if the state allows immediate relatives to attend the service. Schwarz was told the funeral home would be closed, except for employees, and eight people would be allowed in the cemetery.

At first, Rabbi Michael White of Temple Sinai of Roslyn was hesitant. It would be his first time conducting a funeral service via video, and he was concerned the Zoom app couldn’t afford him the closeness needed to console the family.

“I'm so accustomed to being able to offer physical support to families,” White said, “using the comfort of a hand on a shoulder or an embrace or to look people in the eyes as a way of helping to shape the mourning experience at a funeral, so that it can be a healing experience.”

Yet, the virtual ceremony brought people who cared about Roberta Landers together in an abridged celebration of her life.

“It was really nice,” said Schwarz’s daughter, Stephanie Sailor, 45, of Atlanta. “There were people all over the country that would not have been there otherwise.”

The Zoom funeral started soon after Schwarz, her husband, her sister and her brother-in-law arrived in separate cars at the Mount Moriah Cemetery, where Schwarz’s father and other relatives also had been buried.

One by one, nearly two dozen windows popped up on Schwarz’s iPhone screen once they had arrived, framing the faces of family members and close friends from Florida to Oregon.

There was the initial hiccup of an elderly relative who couldn’t find the mute button, though the ceremony went on.

As images flashed on their screens, Tom Schwarz wrapped his arm around his wife’s shoulders. Madelynn Schwarz had a smile on her face.

There was her mother beaming next to Schwarz in her white wedding gown. There she was, holding her great-grandchildren as babies. And then again at a family gathering for Lander’s 90th birthday party.

That was her mother as a vibrant woman, reveling in the life she had before falling sick.

Landers was born on July 27, 1926, in Brooklyn to Irving Weingarten, a plumber and building inspector, and Ada Weingarten, a typist. She grew up during the Great Depression, went to nursing school for six weeks during World War II and in 1947 married Jack Landers, a doll company executive.

Landers was a homemaker with two young daughters, and later went on to work as a bookkeeper in New Jersey, and even opened an antique shop in Whitestone, Queens, where she lived.

After her husband died in 1976, Landers was lost, her daughter said.

Schwarz, a high school guidance counselor, suggested she go to college. Her mom enrolled at Queens College at age 51 to study history. The family had a celebratory lunch when she graduated in the early 1980s.

She loved Chinese food, science fiction and baking. She was a reader and a straight shooter.

Schwarz, her sister, and their husbands took turns shoveling dirt onto the coffin, a symbolic farewell gesture. Then they visited the nearby gravestones of other deceased relatives to place a rock on each one, another custom symbolizing their lasting memory. The rest of the family followed their movements, silently, on the videoconference.

When she saw her mother’s coffin in the grave, Schwarz was hit by the finality of it all.

“I thought, in some ways, I’d feel a little bit of relief that she’s finally at peace and this quality of life for her was over,” she said the night after the funeral. “But I don’t feel that relief.”

Back home in Roslyn Heights, Schwarz spent part of that afternoon on the phone with family members, going over the surreal quality of what they had experienced.

Allison Jacobson, of Wellington, Florida, would have wanted a more conventional and intimate farewell for her grandmother.

“I felt like I really didn’t get closure,” said Jacobson, 46, Landers’ oldest grandchild. “I would’ve liked to have held her hand, kissed her and said goodbye.”

The virtual funeral at least allowed her to partake of it.

To Schwarz’s daughter, Jessica Peery, her grandmother’s death during a global pandemic revealed her family as a chapter in a much larger story — “one shared by every person on this planet today.”