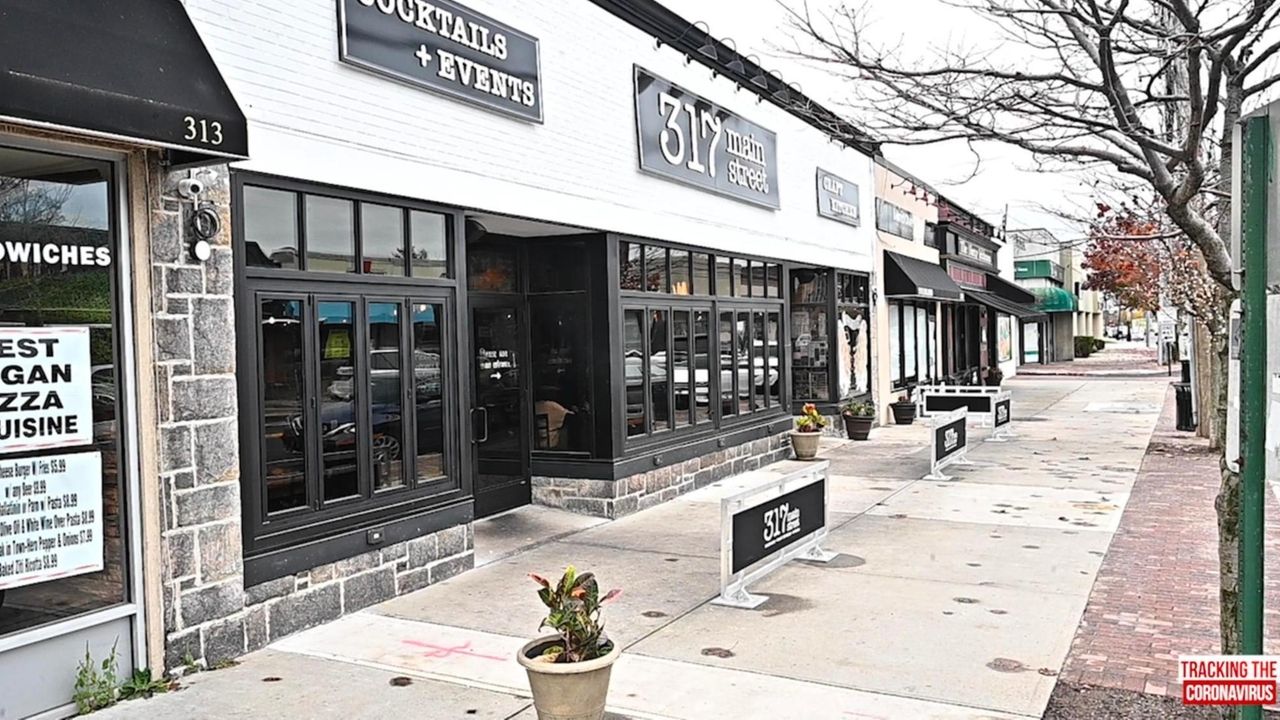 Starting Friday, all restaurants and bars with liquor licenses statewide will have to close by 10 p.m. as part of Gov. Andrew M. Coumo's order to curb a resurgence of COVID-19. Newsay's Steve Langford spoke with business owners on Thursday about what this shutdown means for them.  Credit: Newsday / John Conrad Williams Jr.; PBS Newshour

This story was reported by Laura Albanese, Robert Brodsky, Matthew Chayes, Corin Hirsch, Erica Marcus and Antonio Planas. It was written by Brodsky.

Long Island restaurant, bar and gym owners Thursday lamented new state regulations that force businesses with liquor licenses to close at 10 p.m., with some calling them an overreaction to a spike in coronavirus cases, which grow exponentially. And Long Islanders were divided about another state regulation that limits gatherings in private residences to 10 people.

The guidelines, announced Wednesday by Gov. Andrew M. Cuomo, come amid escalating infection rates across Long Island and the state. The average on Long Island Wednesday was 3.1% and 2.95% statewide.

Establishments with a liquor license, including bars, restaurants, bowling alleys, movie theaters and pool halls are required to close from 10 p.m. to 5 a.m., as are gyms, according to the new order. The change goes into effect Friday night.

Daniel Pedisich, owner of Konoba restaurant in Huntington, purchased heaters, lamps and ventilated tents over the summer to prepare for the cold weather. He said his and other eateries that carefully follow state-issued guidelines offer patrons a safer dining environment than private residences "because we enforce rules, distance and sanitize."

Pedisich said he understands the intention behind Cuomos' rule but shutting down outdoor dining at 10 p.m. is problematic because it prevents him from seating customers after 8 p.m. — essentially eliminating the last dining cycle of the night. Many of Konoba's 8:30 p.m. and 9 p.m. reservations Saturday have already canceled, he said.

"Give us the outdoors until 11 p.m. to allow that 8:30 seating of the 70-year-olds who come out as a group of four to have a meal in a bubble because they are happy to be able to finally go out. They are not partying irresponsibly," Pedisich said. "Let us manage that part of it and let the customers decide to keep doing it all winter if they feel warm and comfortable."

At the The Rust & Gold, a Huntington sports bar, co-owner Frank Antonetti said business has dropped significantly on Friday and Saturday nights because of rules preventing patrons from standing at the bar. Antonetti estimates he’ll need to turn four extra tables each day to compensate for the early shutdown.

"We’re lucky in that we have our outdoor seating area. We have our tents and igloos, and we have extra space to play with," he said. "We’re kind of gambling on people’s willingness" to dine outside in the cold.

"Sometimes I question the logic involved in setting these policies," he said. "By reducing our hours of operation, we are actually increasing our traffic during peak hours, and that seems counterintuitive. It’s also incredibly frustrating when they set policy without supplying all the necessary details."

Justin Tempelman, owner of Bayport's JT’s Farmhouse, said business there is finally "booming" after it closed during the spring shutdown and reopened in the summer, largely for outdoor dining and takeout.

While he's worried about his 100-person staff and the future of his business, Tempelman is taking a philosophical approach.

"I’m not a bar. I’m about dining," he said. "With the holidays upon us, people are going to be gathering, and the virus is going to spread. I’ve been doing this for 25 years. I’ve had a really good run and if COVID takes me out, I’ll regroup. There will be better times."

'My house. My rules'

Cuomo's order limiting private gatherings to 10 people seemingly split shoppers getting an early jump Thursday on their holiday purchases at Roosevelt Field in Garden City. Some insisted the order was necessary to bring down infection rates with Thanksgiving around the corner.

The governor's order got it precisely right, said Fred Stein, 79, of Riverhead.

"Ten is the right number. Ten people, that's it," he said. "I don't want any problems with people getting too close."

Pat Levy, of North Fork, agreed but said Cuomo should have limited the size of home gatherings months ago.

"The government didn't go far enough earlier, and we are in bad trouble," she said. "So, whatever happens now, as far as regulations, I'm completely in agreement with. I'm for everything that could make us safer."

"Who is he to tell us how many people we can have at the family dinner?" asked Steve Jones, 59, of Farmingdale. "My house. My rules."

She called the 10-person limit "absolutely ridiculous," adding that it "totally ruined my Thanksgiving."

The new order is too restrictive, Fabris said. Over the holidays, she won't see her daughter in West Islip at family outings or visit relatives in Maryland because she doesn't have time to properly quarantine.

"We always had a nice Thanksgiving. The same thing with Christmas," Fabris said of her holiday gatherings, which typically have included about 20 people. "We can't live in a shoe box. I won't live in a closet. … We do have to get a vaccine, but we also have to be able to sit down with our family."

A state official said compliance with the rule is critical as attendees at small home gatherings often let their guard down, with little to no mask wearing or social distancing.

While many Long Island gym owners said the 10 p.m. rule would have little effect on their operations, others said the move amounted to an overreaction that could cripple the industry.

"There are so few cases nationwide that have been traced back to gyms, so I just don't understand why," said Alvin Batista, owner of Glen Cove Fitness, a 24-hour gym, adding that he may need to lay off his lone overnight worker.

"We've been closed five months and eight days already the first time around and I don't think we can survive another prolonged shutdown," he said. "You're looking at single-handedly destroying an industry by shutting us down again."

A state official said contact tracing efforts and independent studies have shown gyms are a vector of transmission. Limiting their hours of operation, the official said, decreases the time that COVID-19 could potentially spread and gives gyms more time to clean and sanitize.

Bowling alleys, which in many cases serve food and liquor, are also subject to the order.

At Herrill Lanes, a bowling alley on Herricks Road in New Hyde Park, some leagues end after 10 p.m. and are scrambling to adjust their schedules, said assistant general manager Chris Werben. Some leagues will start playing earlier at night, he said, while others will likely go on hiatus.

"Obviously, it's going to hurt," Werben said of the curfew's effect on his business. "This is a double-whammy, because obviously, when we reopened in September, we lost leagues, and we lost bowlers in leagues that didn't come back because of their concerns about COVID."

Herrill Lanes is set to reopen a bar, with new walls, floors and chairs — coincidentally on Friday — after ownership of the facility changed in August.

"We were hoping to be open till midnight, one o'clock," Werben said. "Now, we gotta be out of the building by 10. I fully understand why. With the infection rate up, people need to be safe and we need to get those rates down."

What you need to know about the new statewide COVID restrictionsWe answer your questions about New York State's new limitations on restaurants and bars, gatherings in private residences and more. Halloween gatherings bring spike in Suffolk COVID cases, Bellone saysNew restrictions could result from the increase after residents gathered for small parties over a week ago, County Executive Steve Bellone said. See the latest news on the coronavirus, vaccinesKeep up to date with the latest on the global coronavirus outbreak.