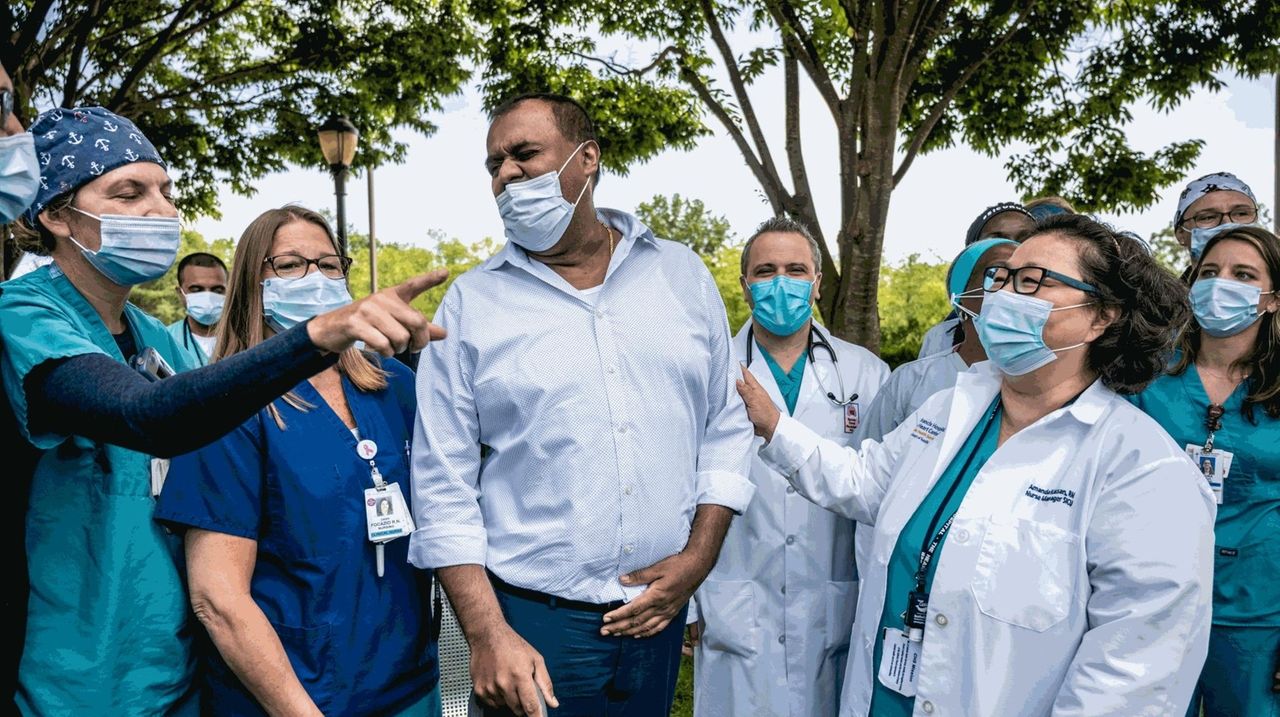 Tony Thomas, of New Hyde Park, is reunited with his medical team at St. Francis Hospital on Wednesday following a 39-day battle with COVID. He will be home to celebrate Father's Day with his newborn son, and the rest of his family. Credit: Newsday / Chris Ware

The anguish, grief and overwhelming sense of relief poured out of Tony Thomas the first time he held his son Jonathon — 54 days after the child's birth during the most unusual of circumstances.

After battling a severe case of COVID-19 and missing the birth of his third child, Thomas, 39, of New Hyde Park would spend nearly a month attached to a ventilator, unable to breathe on his own.

"When I held my son for the first time I literally cried," Thomas recalled Wednesday as he was reunited, only days before Father's Day, with his medical team at St. Francis Hospital in Roslyn. "I couldn't control my emotions … I am so thankful I was able to hold him, be with him, spend time with him. I can't ask for a better Father's Day than being with my three kids."

Thomas, a registered nurse at Brookdale University Hospital and Medical Center in Brooklyn, contracted COVID-19 in late March, only days before his wife, Riya, was scheduled to give birth.

When Riya Thomas, who also tested positive for the virus, was taken to NYU Winthrop Hospital to give birth on March 28, Tony remained quarantined at home. The following day, Tony's condition took a turn for the worse and he was admitted to St. Francis.

On March 30, Thomas, unsure whether he would ever meet his son, was put on a ventilator. He remained attached to the lifesaving machine for the next 28 days.

Dr. Jeffrey Wolf, a pulmonologist and associate director of the hospital's surgical intensive care unit, began treating Thomas immediately after returning to work following his own recovery from the virus.

Tony's case hit close to home, Wolf said, and the St. Francis medical staff made it their mission to bring Thomas home to his family.

"After struggling for over a month we finally got him to the point that he was ready to come off the ventilator. And we took his breathing tube out and I heard his voice for the first time and I knew he was going to be OK," Wolf said. "I just lost it. I had tears in my eyes. I couldn't finish a sentence without getting choked up. It was such an incredible relief and clearly a high point in my career."

"Here you have a 39-year-old health care worker who was healthy and now he's critically ill on a ventilator for over a month in the intensive care unit," Wolf said. "And that doesn't make any sense. That could have been any one of us. It could have been me."

For Riya Thomas, the journey was equally challenging. She was forced to give birth without her husband and then, because of her own COVID-19 diagnosis, was unable to hold Jonathon — who tested negative for the virus — for more than a week.

She says prayer and family helped her through the darkest hours.

"I don't know how I would survive without [Tony]," Riya said. "I was blessed. I am the luckiest woman in the world."

Tony was released in mid-May but is still in rehabiliation and says he is slowly regaining his strength and hopes to return to work soon. In the meantime, he plans to make up for lost time with his son and daughters, Brianna, 7, Joanna, 2, while enjoying a Father's Day barbecue.

"For Father's Day this is my true bundle of joy," pointing to Jonathon. "Being with him. Spending time with him. And being thankful every day for what I have."