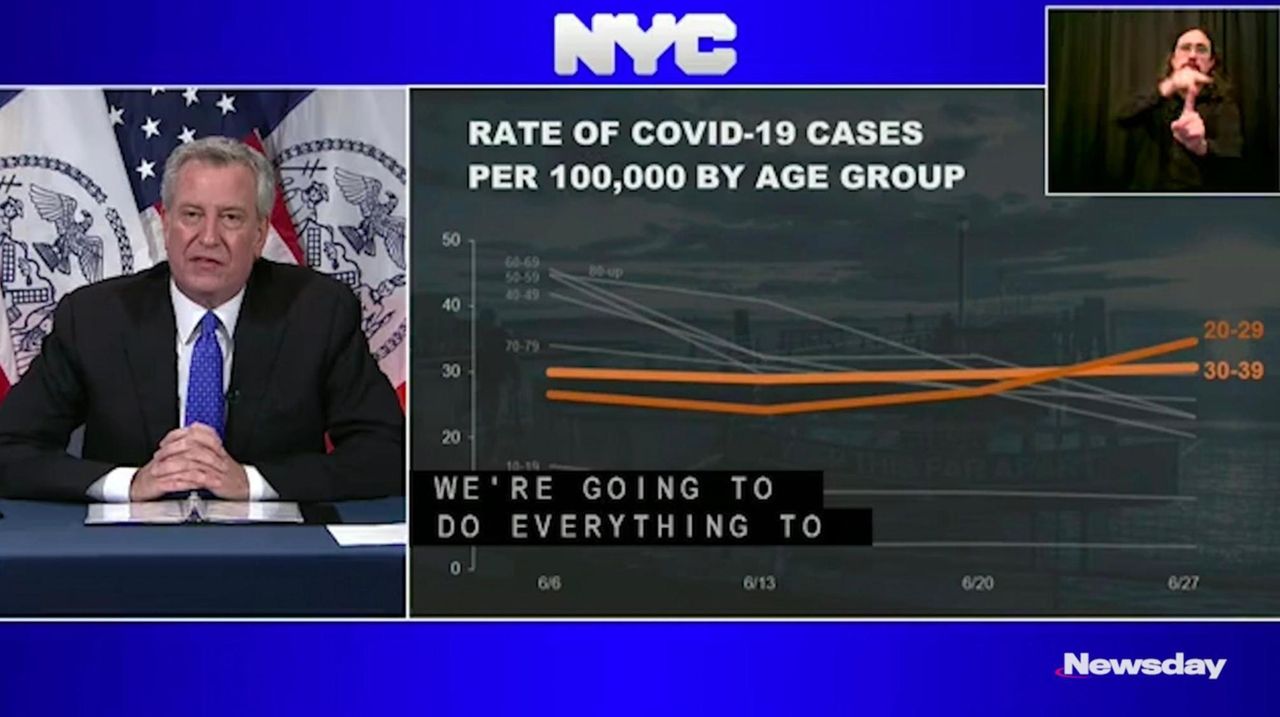 Mayor Bill de Blasio said on Monday that even though the number of infections in New York City continues to decline, he is concerned about an uptick in cases for adults in their 20s.   Credit: NY Mayor's Office

New York City had no deaths related to the coronavirus on Saturday, four months after the first pandemic fatality was reported in the state on March 11, Mayor Bill de Blasio confirmed on Monday.

The mayor said the zero deaths reported Saturday was an important milestone for the city that was once the epicenter of the pandemic, but New York  had a lot more work to do before it could declare victory over the virus that has infected nearly 220,000 residents and killed more than 18,000, de Blasio said Monday during his daily coronavirus briefing.

“It’s hard to take a victory lap because we know we have so much more ahead,” the mayor said. “This disease is far from beaten.”

De Blasio said city officials are concerned about severe spikes in coronavirus cases in the Sunbelt that could lead to surges in New York.

De Blasio said he was especially concerned about a rise in cases among adults in their 20s and a slighter increase in cases in people in their 30s.

The mayor said the city would expand educational outreach and mask giveaways to urge young adults to take steps to protect themselves from the virus.

“We are going to do everything to reach younger adults, to remind them they are not impervious,” de Blasio said.

The mayor also issued a new guidance requiring people to wear face coverings while in stores and in businesses.

"New Yorkers should wear a face covering as much as possible around other people in an indoor setting that is not their home," de Blasio said.

Many people who have been tested for the deadly virus have had to wait weeks before they received results, said de Blasio, who called the lag time unacceptable and blamed it on the surge in Sunbelt cases. De Blasio called on President Trump to invoke the Defense Production Act to force companies to expand testing across the country,

“The labs, not just for New York but around the country, are absolutely overloaded,” de Blasio said. “They cannot keep up because we don’t have enough lab capacity in America...it’s a real sad statement on America that our ability to protect ourselves during a health crisis was allowed to atrophy so badly.”