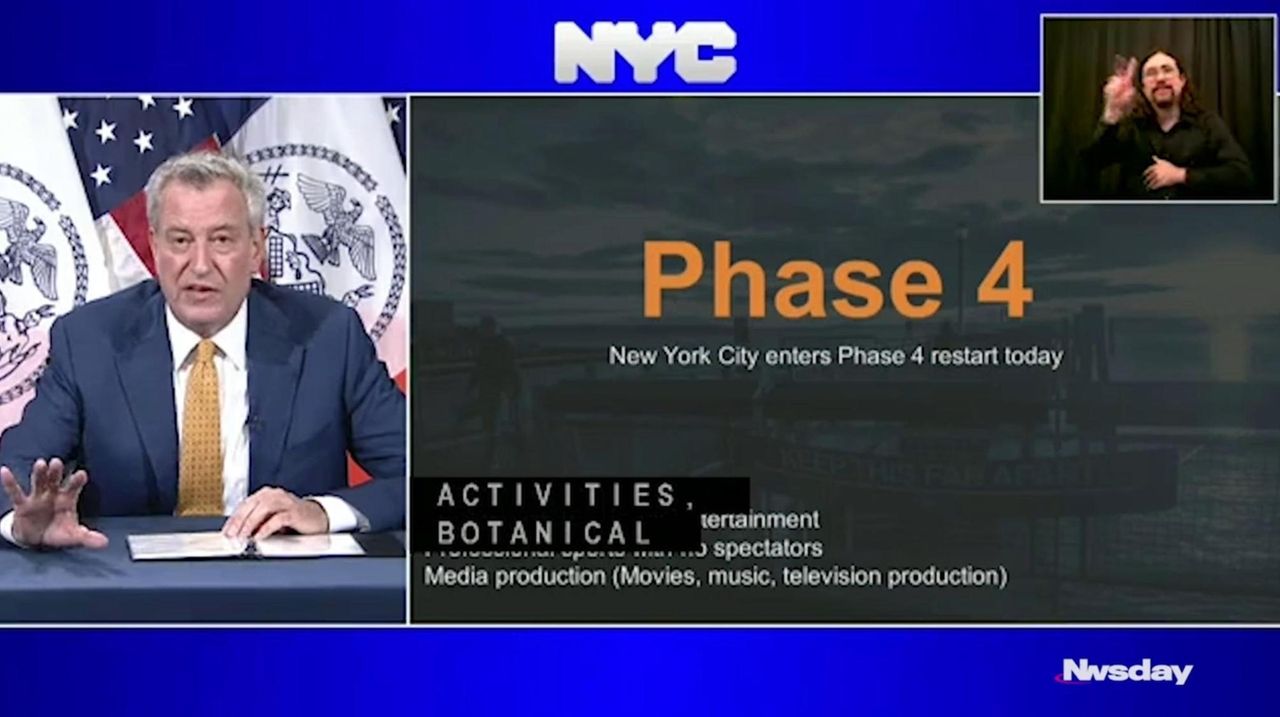 Television and film crews got the green light to ramp up their work and zoos and botanical gardens reopened as New York City — once the epicenter of the global coronavirus pandemic — entered Phase 4 Monday.

Indoor dining is still barred while malls, museums and theaters remain closed, and Gov. Andrew M. Cuomo and Mayor Bill de Blasio warned that large gatherings like the Astoria street party recorded on video over the weekend could lead to a surge in pandemic cases and a return to coronavirus restrictions.

“We know in other places it was reckless disregard in the way bars and restaurants were handled that was one of the causes of the resurgence of the coronavirus. We will not let that happen here,” the mayor added.

New York is also exploring holding classes outdoors if schools do open in September, De Blasio said, although the logistics are difficult in a densely populated city where open spaces are rare.

“For a space to work for a school, obviously, it has to be pretty nearby and it has to be available quickly,” de Blasio said.

Professional sports also returned, albeit without spectators, as the Yankees swept the Mets in their weekend exhibition series.

Cuomo and de Blasio, speaking at separate news conferences, were more concerned about preventing a spike in COVID-19 cases than baseball. The mayor said he was concerned about videos posted on social media over the weekend that showed hundreds of people partying on Steinway Street in Astoria without masks or observing social distancing guidelines. One restaurant linked to the gatherings, de Blasio said, has been closed.

De Blasio acknowledged that the city had failed to act aggressively after receiving complaints in recent weeks from City Council member Costa Constantinides and 311 callers about large gatherings on in Astoria.

“This particular problem in Astoria obviously has grown and it particularly occurred very late at night and I think that's part of what was underrecognized,” de Blasio said. “I'll be the first to say that. I think there was activity earlier in the evenings, but did not recognize that it was so late at night when some of these problems were occurring.”

De Blasio said the city has not set a timeline for opening up indoor facilities such as malls, museums and theaters but that the coronavirus surge that has devastated Sunbelt states in recent weeks suggests a cautious approach is best.

“We understand completely this is presents an incredible challenge for the businesses throughout the city,” said Jay Varma, a top public health adviser to the mayor. “But we've seen what has happened in many other places around the world, particularly places that have done an exceptional job at controlling this epidemic have had to repeatedly open and close indoor bars, restaurants, other shopping facilities because of resurgences.”