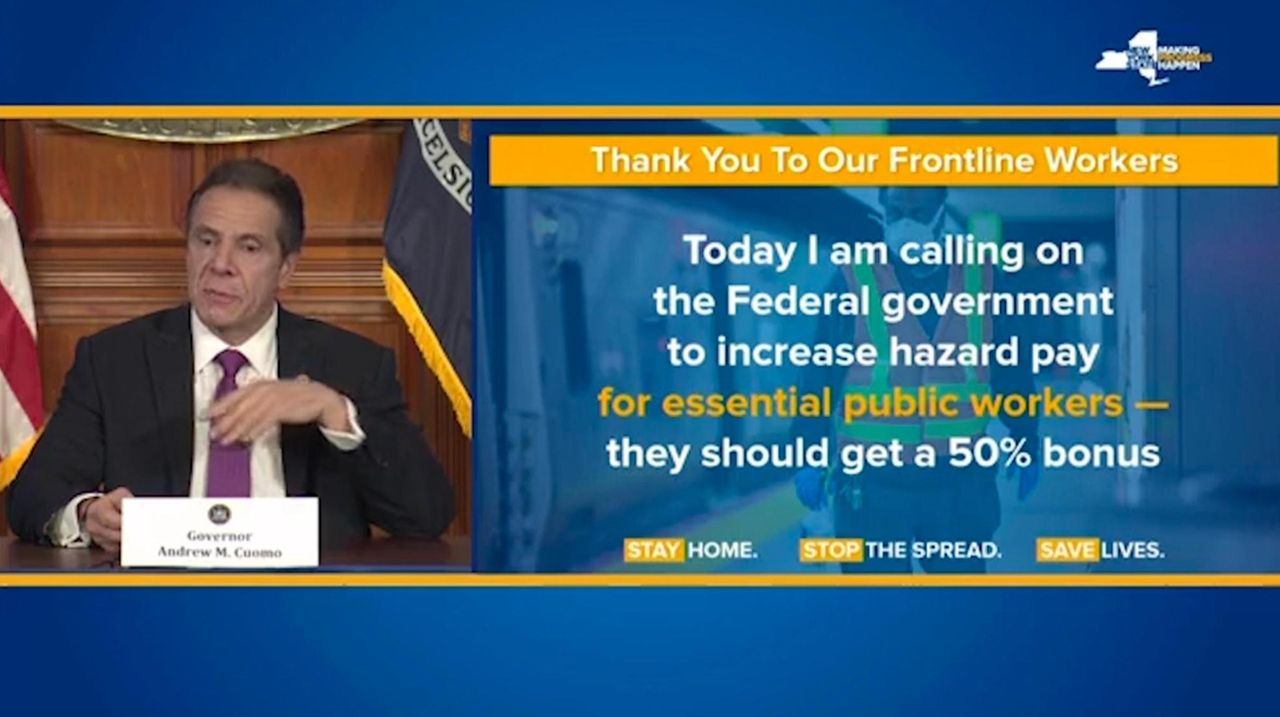 This story was reported by Rachelle Blidner, Alfonso A. Castillo, Bart Jones, Michael O’Keeffe, David Reich-Hale and John Valenti. It was written by Jones.

The daily coronavirus death toll dropped below 500 statewide for the first time in more than two weeks, Gov. Andrew M. Cuomo said Monday, as he proposed “hazard pay” for front-line workers and a new effort to combat the virus in public housing projects in minority neighborhoods.

Calling them heroes, Cuomo said health care workers, police, transit workers and others on the front lines are exposing themselves to COVID-19 every day and deserve a federally funded 50% bonus.

“They are the ones that are carrying us through this crisis, and this crisis is not over,” Cuomo said at his daily briefing in Albany. “I think any reasonable person would say we should right this wrong.”

He reported 478 deaths from the virus since Sunday, a drop from a peak of nearly 800 about a week and a half ago, though he called it still "horrifically high." He noted that other indicators, such as hospitalizations and intubations, continue to decline.

“We can control the beast. The beast will not destroy us,” he said, though warning the crisis is far from over.

Cuomo said a high percentage of the front-line workers are people of color, and that minority communities also have been hit with a higher percentage of COVID-19 cases than other areas.

“All those essential workers had to get up every morning to put food on the shelves and go to the hospitals to provide health care under extraordinary circumstances,” along with others such as police and firefighters, Cuomo said. “Those people worked, and they went out there and they exposed themselves to the virus.”

He added: “When you were home with your doors locked dealing with cabin fever, they were out there dealing with the coronavirus, and that’s why they are more infected. Pay them what they deserve.”

The state is launching a pilot program in New York City’s public housing projects to try to curb the spread of the virus, including more testing and health services, along with distribution of 500,000 cloth masks and 10,000 gallons of hand sanitizer, Cuomo announced.

Public housing projects, he said, are fertile grounds for the virus to spread because of small and often crowded lobbies, elevators, hallways and apartments.

Suffolk County said Monday that it, too, would start outreach efforts directed at a high-risk group where COVID-19 rates may be elevated: migrant farmworkers on the East End.

The county started handing out face masks and hand sanitizer to the workers, most of them immigrants from Latin America, and will be making sure they are informed on how to protect themselves and their families, County Executive Steve Bellone said.

Northwell Health, which operates 19 hospitals, including 11 on Long Island, said it would start a bonus program of its own for front-line workers, offering $2,500 and a week of paid time off.

About 45,000 nurses, physicians, respiratory therapists and other patient caregivers are eligible.

"Our dedicated staff's response to the COVID-19 pandemic has been nothing short of heroic," said Michael J. Dowling, Northwell's president and CEO.

Northwell reported encouraging signs that paralleled Cuomo's report. As of Monday, it had 2,626 COVID-19 patients. That's down from about 3,600 earlier in the month.

Northwell said only one of its hospitals, LIJ-Valley Stream, has an ICU occupancy rate above 90%. 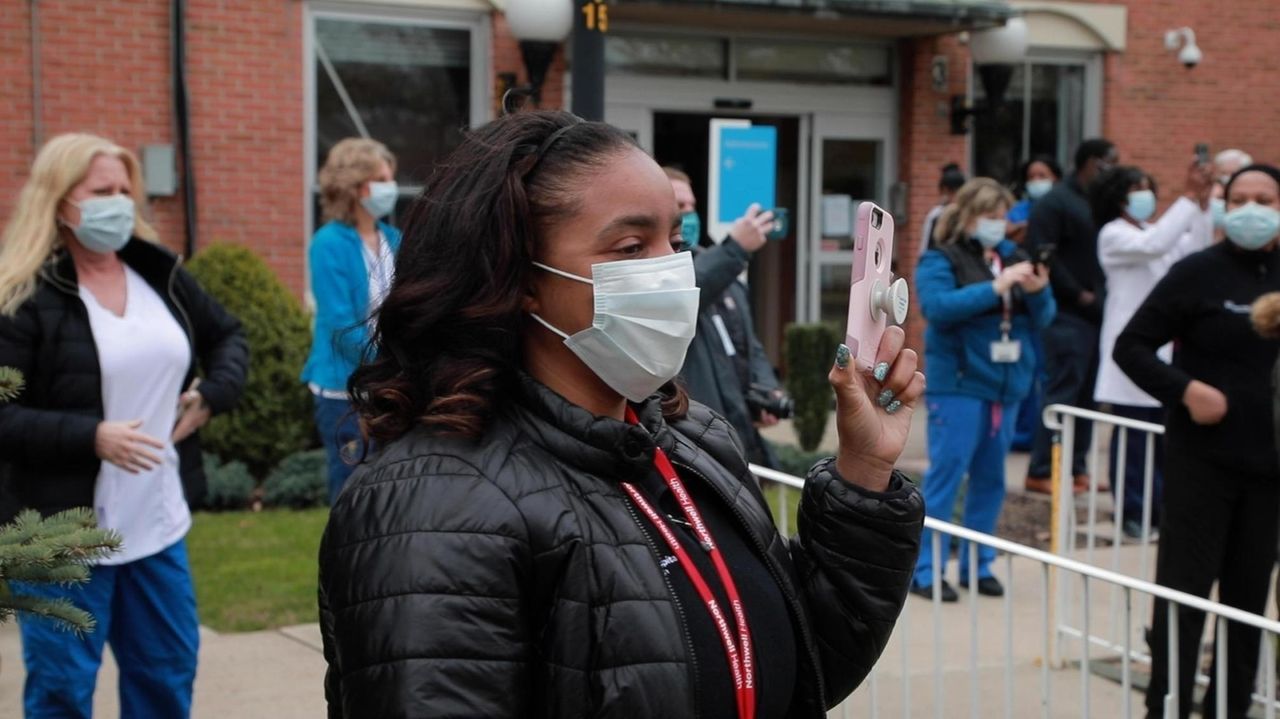 And while it might not seem like major news, Nassau County Executive Laura Curran said, marinas and boat basins reopened in the county on Monday following Cuomo's statewide order, with golf courses to follow soon.

“It’s baby steps. It’s indicating to our residents we are starting to come back,” Curran said.

To golfers, she added: “Hang tight. We’ll tell you soon when you can go back to the greens and tee off."

Trump and Cuomo to meet

In Washington, President Donald Trump at his daily briefing said he will meet Tuesday in the Oval Office with Cuomo, a fellow native of Queens. 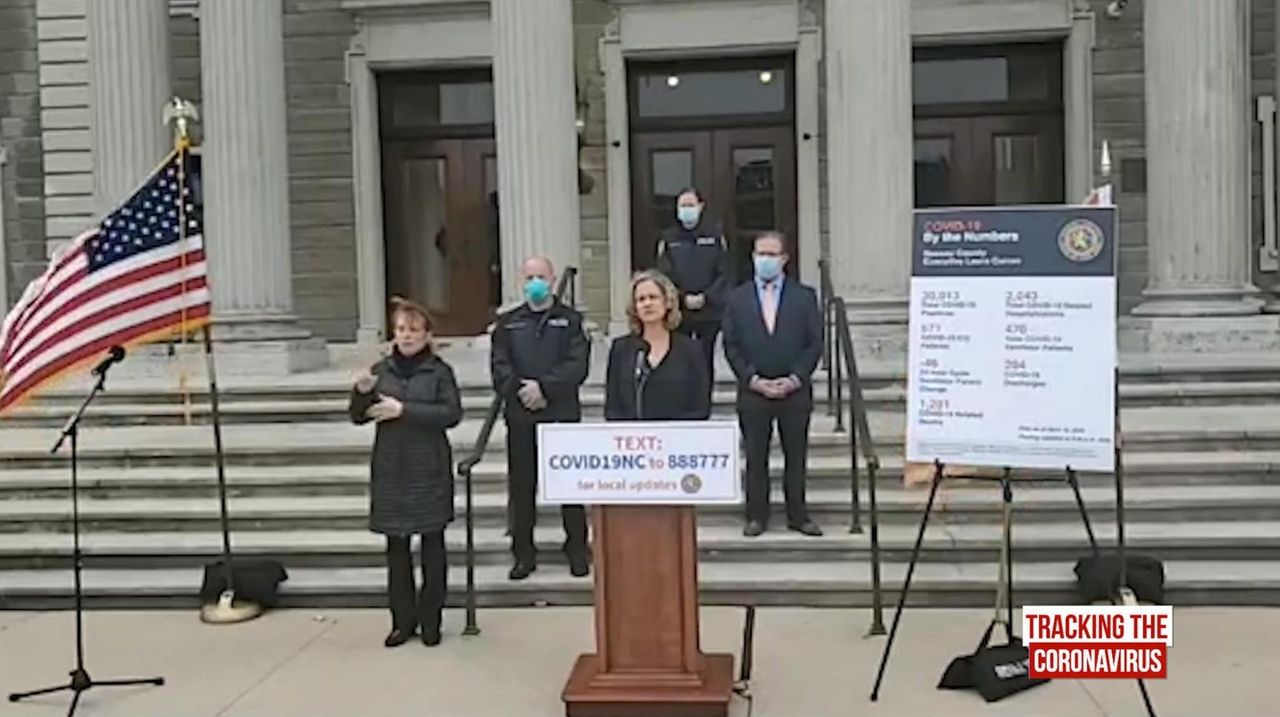 He said “states need to assess their complete inventory for capacity” for testing, and “not simply ask the federal government to provide unlimited support.”

The impact of the virus continued to reverberate in the region. New York City Mayor Bill de Blasio said parades, concerts, rallies and other large gatherings scheduled for June are canceled, as the city has surpassed 136,000 coronavirus cases and has registered 10,344 deaths. The canceled events include the Puerto Rican Day Parade, the Pride March and Celebrate Israel, though they might be held later in the year.

De Blasio noted that this year is the 50th anniversary of the Pride March, which he called a “historic moment." 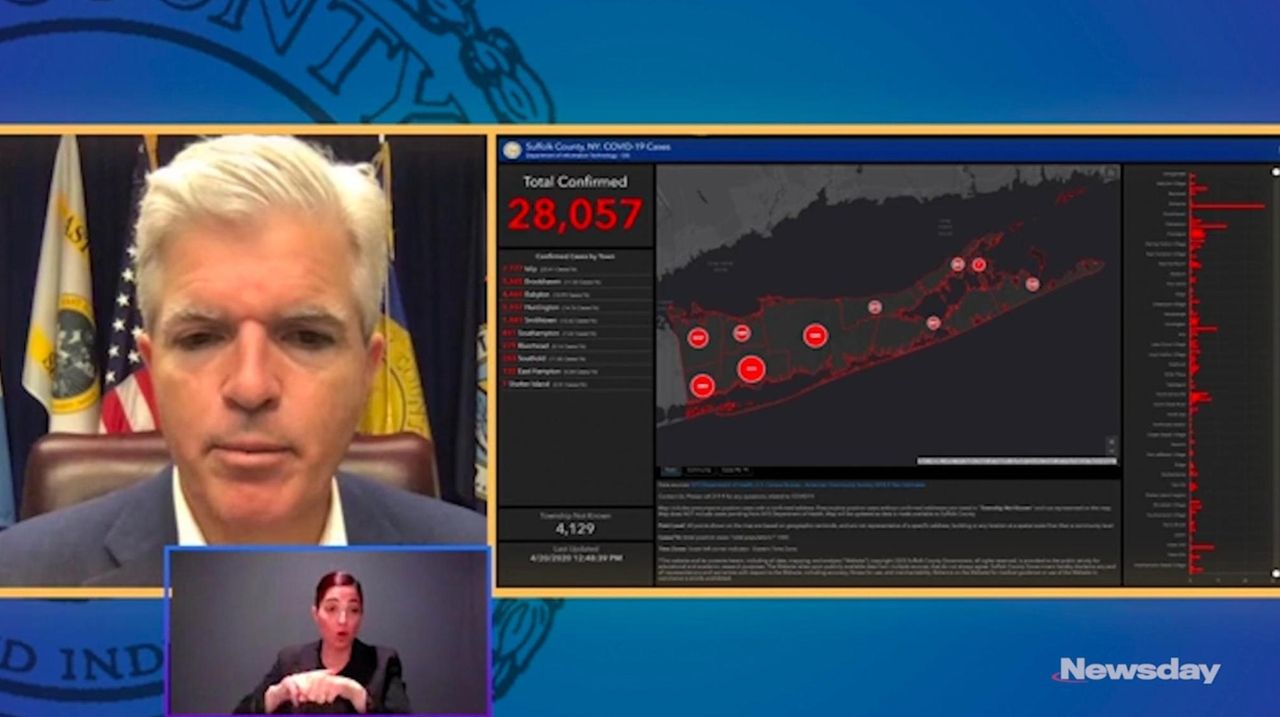 Curran also reported hopeful signs in Nassau, with overall hospitalizations of COVID-19 patients declining for the fifth day in a row.

The number dropped by 161 from the previous day, to 2,043. “Overall hospitalizations have declined 18% since the high-water mark six days ago,” Curran said.

“It tells us we’re in a good place,” she added. “The numbers are looking better, but we are far from out of the woods. We’re not letting up. We’re still doing a full-court press.”

The Metropolitan Transportation Authority said Monday that, for the first time since the outbreak, the number of its employees who have returned to work after being quarantined is higher than those still out.

About 5,000 employees have returned to work after either testing positive for the virus or having potentially been exposed to it. That’s out of more than 9,000 employees who have been quarantined at one point, the MTA said.

At the Long Island Rail Road, 691 have returned to work, while 395 remain in quarantine. 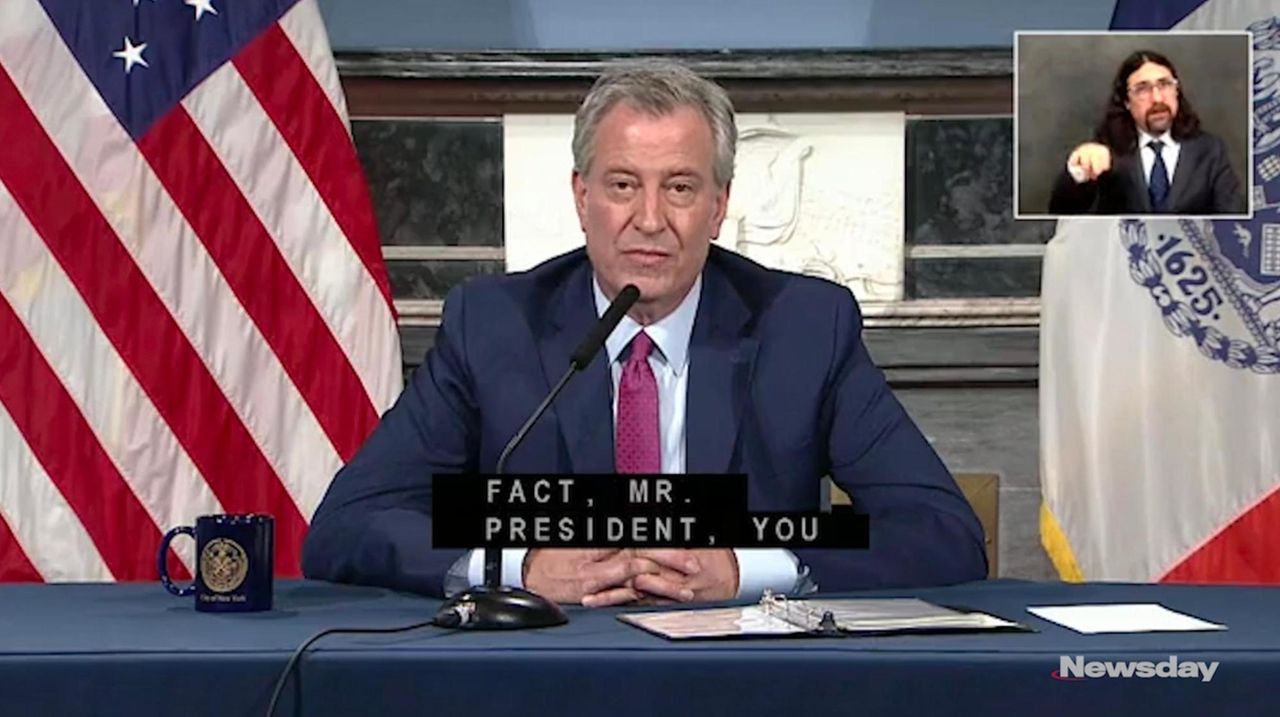 Transit workers have been hit particularly hard by the pandemic, with nearly 3,000 MTA employees testing positive and 79 dying from COVID-19. MTA officials have said the high rate of exposure and infection has resulted in employee shortages, making it difficult to operate trains and buses.

Statewide, total hospitalizations of COVID-19 patients have dropped from about 18,700 a week ago to 16,103, marking seven straight days of declines, according to state data released Monday.

Intubations were in negative territory for eight straights days. The number of newly admitted COVID-19 patients dropped to 1,380 by Sunday, from a high of 3,400 about two weeks ago. It was the sixth day in a row of a net decline.

Those glimmers of hope came as New York on Monday launched what Cuomo called the “largest antibody test ever done” to try to determine what percentage of the population has or had COVID-19 and may have immunity to the virus.

The goal of the random sample survey of thousands of people is to help state officials decide how quickly people can return to work.

Cuomo took a shot at protests that have broken out around the country calling for an immediate end to social distancing measures. At least one Facebook group is promoting a similar protest in Albany on Wednesday.

Some of the antibody testing will take place in Nassau at an undisclosed location, Curran said. Bellone said there also will be a testing site in Suffolk.

Cuomo said New York needs federal financial assistance not just with testing but in other areas, also. He said the state would have to cut funding for schools, local governments and hospitals by 20% each without federal assistance. That would be disastrous, he said, and also unfair to the essential workers and first responders who are part of those institutions.

Cuomo said about 40% of front-line workers are people of color, two-thirds are women and one-third are from low-income households. "Black and brown Americans" have been hit with the brunt of the outbreak, he said.

“The economy did not close down. It closed down for those people who frankly have the luxury of staying home” while essential workers kept showing up to work, he said.

The state also will be working with officials in downstate New York — including Curran and Bellone — to "reimagine" how the region propels forward itself as it starts to reopen.

Earlier Monday, de Blasio said the city will spend $3.5 billion by the end of the year battling the coronavirus pandemic and again asked the federal government to help "make us whole."

He said the response from Trump has been silence.

He was asked about his comparison over the weekend to then-president Gerald Ford telling New York City to "drop dead" during the financial crisis in 1975.

"I don't think Donald Trump wants to be in the company in history with Gerald Ford or with Herbert Hoover," noting how Hoover handled the fallout of the 1929 stock market crash leading to the creation of Depression-era shanty towns known as "Hoovervilles."