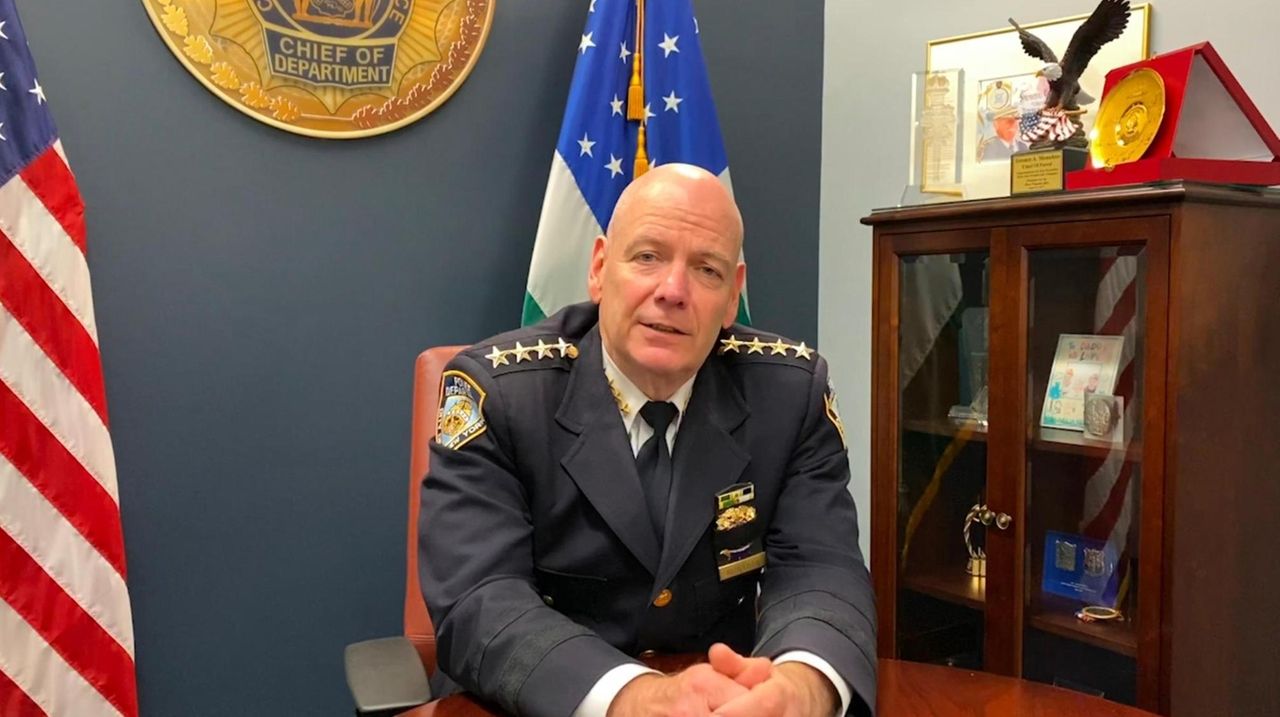 On Thursday, Chief of Department Terence Monahan talks about how the coronavirus will impact the NYPD for weeks and months to come. Credit: Newsday

As the coronavirus pandemic approached New York City, one nightmarish scenario projected that as much as half of the NYPD officers — over 18,000 cops — could get sick.  The most dire prediction, saying that hundreds of officers could die, also worried the top brass.

NYPD Chief of Department Terence Monahan, who has more than three decades in uniform, didn’t believe the dire predictions.  But from everything else Monahan was hearing about the deadly virus, he knew that the NYPD was going to encounter something it had never seen before.

“In 38 years, I never thought of ever dealing with something like this,” Monahan, the department’s top uniformed official, said in an interview with Newsday last week.

Since March 12,  after New York Gov. Andrew M. Cuomo issued a statewide stay-at-home directive, the NYPD has basically stopped doing business as usual.  All training has ceased, the April police academy class was canceled, and basic things like firearms training have been suspended.  Even training for the vaunted neighborhood policing program has been on hold.

The hiring of a group of psychologists, originally needed to deal with a record number of police suicides in 2019, also became a casualty, with interviews taking place to fill those jobs slowing down, Monahan said. Those psychologists will be critical resources when the pandemic subsides.

The NYPD had to react fast, calling for all hands on deck as it tries to put as many officers as it can -- thousands -- on the street to enforce social distancing, officials said. Other units depleted by the virus had to be reinforced, Monahan noted.  Early in the pandemic, as much as 20% of officers were on sick call at one time.  Since the begining of the crisis, nearly 4,200 officers have tested positive for the virus and 28 NYPD personnel -- officers and  civilians -- have died as of Friday evening.  Some 1,450 sickened officers have returned to duty.

Monahan and others in the department said the pandemic is the biggest challenge facing the NYPD and New York City since Sept. 11.  But unlike the terror attack of almost 20 years ago, the current pandemic is presenting new issues for the department that experts believe will have profound impact on the thousands of officers finding themselves fighting an invisible enemy and confronting emotional and psychological traumas they were not expecting to deal with.

“The biggest issue that has hit with cops is that we all know our work is dangerous,” Monahan said. “But this is the idea that they can bring this (virus) home to their families.  This is the biggest psychological hit.”

Eugene O’Donnell, a former member of the NYPD who teaches at John Jay College of Criminal Justice, says officers are aware that they put themselves in harm's way when they take the job.  “But they don’t think it would put your loved ones in harm's way,” O’Donnell said.

“Cops are used to danger,” said Dr. Lawrence Amsel, an assistant professor of psychiatry at Columbia University.  But officers don’t want to bring danger to their families, he said.

As the coronavirus has killed thousands in the city, it is often officers who have to respond to calls from families about deceased people.  Whereas once the NYPD handled 20 such calls a day, during the pandemic officers handle 200 such requests daily to investigate deceased persons, Monahan said.  To handle those situations, officers are equiped with biohazard suits, gloves and masks. Despite the measures, there is always fear the virus may follow cops into their homes.

Some of those officers are staying away from their families in hotel rooms provided by the NYPD, until the pandemic subsides and it is safe for them to go back home, Monahan said.

The danger inherent in such pandemic work, said Amsel, causes a psychological conflict for cops and contributes to later anxiety that may affect their work and personal lives with post-traumatic stress disorders.  Officers, often able to control situations, feel powerless against the virus.   “They can’t do anything about it,” Amsel said.

Matthew Hickey, a former NYPD detective who grew up in Nassau County and last year made a video to help cops troubled by thoughts of suicide, said that initially, officers might not understand what they are experiencing by seeing so much pandemic death.

“When you are in the middle of it, being there all of the time, you don’t think about it,” explained Hickey, referring to the trauma of recovery work done by cops after Sept. 11. “The problem is it eventually catches up to you.”

While cops during Sept. 11 had a breed of hardened  supervisors, many of them Vietnam War veterans, to guide through the horrors, such does not seem to be the case for the newer crop of officers today, Hickey said.

Patrick Lynch, head of the Police Benevolent Association, also believed that the real psychological crisis for cops from the pandemic is yet to come down the road

“There is no doubt that this pandemic has put an extraordinary strain on police officers and their families,” said Lynch in a statement to Newsday. “As we know from the September 11 experience the most severe mental health effects may not appear until after the crisis subsides.  We have made it clear to the Department that there must be no break in mental health services. If anything the planned expansions should be accelerated, not delayed.”

Amsel said psychological programs of the NYPD should be accelerated in advance of problems.

“They should be ramped  up, right now,” said Amsel, who is an expert on post-traumatic stress in not only cops but the FDNY, which is also bearing the brunt of the coronavirus response.

The city should also put counseling and mental health services online to handle the pandemic aftermath among police and firefighters, Amsel said.

Monahan agreed with Amsel and others that the NYPD needs to have an infrastructure ready to  handle the emotional toll of the pandemic.

“Everything right now has slowed down,” Monahan acknowledged. “This is something we are going to push very hard when this is over.”