Gov. Cuomo said that schools can reopen in September if a region is in Phase 4 and the coronavirus infection level is 5% or lower. Long Islanders react. Newsday's Cecilia Dowd has the latest. Credit: Newsday / Raychel Brightman; Howard Schnapp; Jeff Bachner

Schools in New York State can reopen in September if the coronavirus infection level is 5% or lower in their region by the first week in August, but will remain closed if the level rises to 9% or greater before the day school opens, Gov. Andrew M. Cuomo said Monday.

Under the guidelines announced by Cuomo, schools on Long Island and throughout the state would be allowed to open given current conditions, with the infection level statewide Sunday at 1.08%. Long Island’s rate was 1.5%.

The region where a school is located must be in Phase 4, the last phase, of reopening. The 5% level must be a 14-day average, while the 9% level would be a 7-day average.

If the levels hit 9%, “that means the virus is moving rapidly and it is not intelligent to reopen," Cuomo said. “We hit an emergency stop button … It’s very simple, it’s clear.” 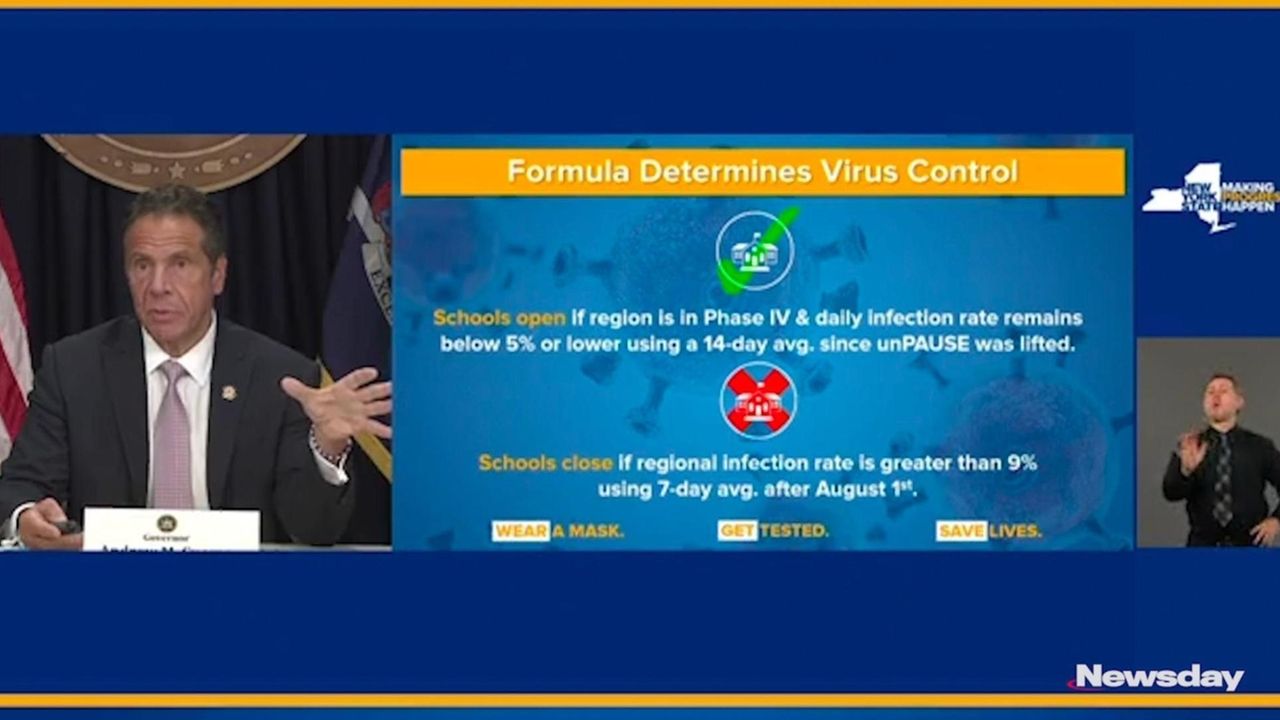 The entire Nassau-Suffolk area is treated as a single region under the guidelines.

An initial decision on whether schools can open will be announced the week of Aug. 1, Cuomo said.

Educational leaders in the region welcomed the governor's announcement, as well as a set of new regulations approved by the state's Board of Regents aimed at enhancing student safety and instructional flexibility.

Bob Dillon, superintendent of the regional Nassau County BOCES, said confidence in Cuomo's leadership was bolstered in recent months by a series of executive decisions that helped lower infection rates.

"The governor has been right on target, so I'll accept his judgment at this point," Dillon said.

"This is information we had been waiting for," Lutz said.

"We are very encouraged by the Governor's remarks and continue to develop plans to have our students in the classrooms and on campus this fall," Brother Thomas Cleary, president of Chaminade High School and head of a task force aimed at revitalizing the 35 elementary schools run by the Diocese of Rockville Centre, said in an email.

Cuomo did not specifically mention private schools Monday, but there are thousands of them throughout the state including religious and nonreligious institutions, and many observe the same state guidelines and regulations as public schools.

Cuomo said the schools reopening will be conducted the same way the state reopened its economy. "It’s purely on the numbers,” he said.

Last week, the governor declared that districts by July 31 would have to submit plans for reopening in the fall, and that the state would make a final decision between Aug. 1 and 7 whether schools can actually operate. The state Department of Education is expected to send more detailed guidelines to districts later this week.

A stringent set of regulations will be in place for schools, including face masks when social distancing is not possible, regular disinfection, screening of students and contact tracing for anyone who gets infected with COVID-19.

The regulations call for six feet of separation between students and instruct schools to use gyms and other community spaces to expand available classroom space for in-person instruction. Every person entering a school will be "screened," Cuomo said, though he did not specify if that meant temperature checks or asking people if they have symptoms associated with COVID-19.

"Look, all teachers, students and parents want the kids back in school next year, as long as we can meet the safety precautions that the Department of Health says are necessary," said Perry Fuchs, a high school science teacher and president of the Plainedge Union Free School District's 320-member teacher union.

Jeanette Deutermann of Bellmore, organizer of an Islandwide parent network, issued a statement supportive of reopenings but noting that safety measures required funding.

"Most will be happy to hear there is a plan to reopen with strict criteria on regional infection rates," Deutermann said, referring to teachers and parents. "Expecting schools to shoulder the burden of safety without additional financial aid is illogical."

New York State United Teachers President Andy Pallotta hailed the guidelines in a statement, while calling for more state and federal financial aid. "... State guidance may be the roadmap for districts, their school staff and their families to work on reopening plans that are right for their communities, but nobody should be discounting the need for the resources to actually pull safe, equitable reopening off," he said.

If the state decides to allow schools to reopen, New York's 700 districts will have to come up with and implement reopening plans they devise based on state guidelines, Cuomo said.

Cuomo's move was in contrast to some cities including Los Angeles and San Diego, and some colleges including Harvard, that have already announced all instruction will be remote for the coming fall, if not the entire academic year. Others including Notre Dame and Penn State have announced in-person instruction. Yet others plan hybrid models of both approaches.

Board of Regents Chancellor Betty A. Rosa said: “Creating a framework to reopen New York’s schools has been an undertaking of paramount effort, made even more difficult by the devastating impact the pandemic has had here in New York State. This framework and the guidance which will follow allows schools to plan for the upcoming school year under three different scenarios that aim to keep our children, educators and school personnel safe and encourages equitable access to high-quality services for all students.”

Interim Education Commisisoner Shannon Tahoe said a series of four regional meetings with educators and students around the state helped form the guidelines.

“The input we received from participants at our regional task force meetings and our student forum truly proved invaluable and, by working together, we will be able to ensure that the issues of health, safety, and educational equity are at the forefront of every decision,” she said.

In related action, the Regents board Monday unanimously adopted more than two dozen new regulations related to instructional quality and flexibility. One new set of rules would require that students given online instruction would have to be provided with "meaningful" feedback on their assignments, and that schools would have to come up with systems for tracking students' engagement in their work. Another change would provide that required labwork could be met through a combination of hands-on and simulated experimentation.

Some regulatory change could raise eyebrows. One provision would allow substitute teachers who lack certification but hold high school diplomas to be employed for up to 90 days or even longer in rare circumstances, beyond the state's current 40-day limit. Several Island officials said Monday that the rule seemed intended mostly for remote upstate areas that face particular problems in teacher recruitment.

Schools began closing in mid-March, both on the Island and in other parts of the state. In the weeks that followed, a number of educators and others observed that the switch to online instruction seemed to be widening the gap between rich and poor school districts, especially for students without access to up-to-date computers and reliable Wi-Fi connections.

Richard Loeschner, superintendent of Brentwood schools, said the governor's announcement Monday left him hopeful that students could return to classes in the fall, and that this would prove beneficial. Brentwood is the region's largest district, with just over 19,000 students, many of whom struggle economically.

"Honestly, kids are suffering at home under the quarantine," Loeschner said. "I'm concerned about their academic slide."

Freeport's superintendent, Kishore Kuncham, said he thought Cuomo's move would help schools plan more fully for the fall, but added he wants to see more details. For instance, Kuncham wants to know how many students will be allowed to ride in a school bus at any given time. There has been speculation that bus loads might be sharply limited.

"We will do whatever it takes following the guidelines … to make sure the kids are safe," Kuncham said.

During his news conference, Cuomo also took aim at President Donald Trump's recent statements on school reopenings, saying the president was taking the same approach to schooling as he had to the economy.

New York has more data than any other state, he said.