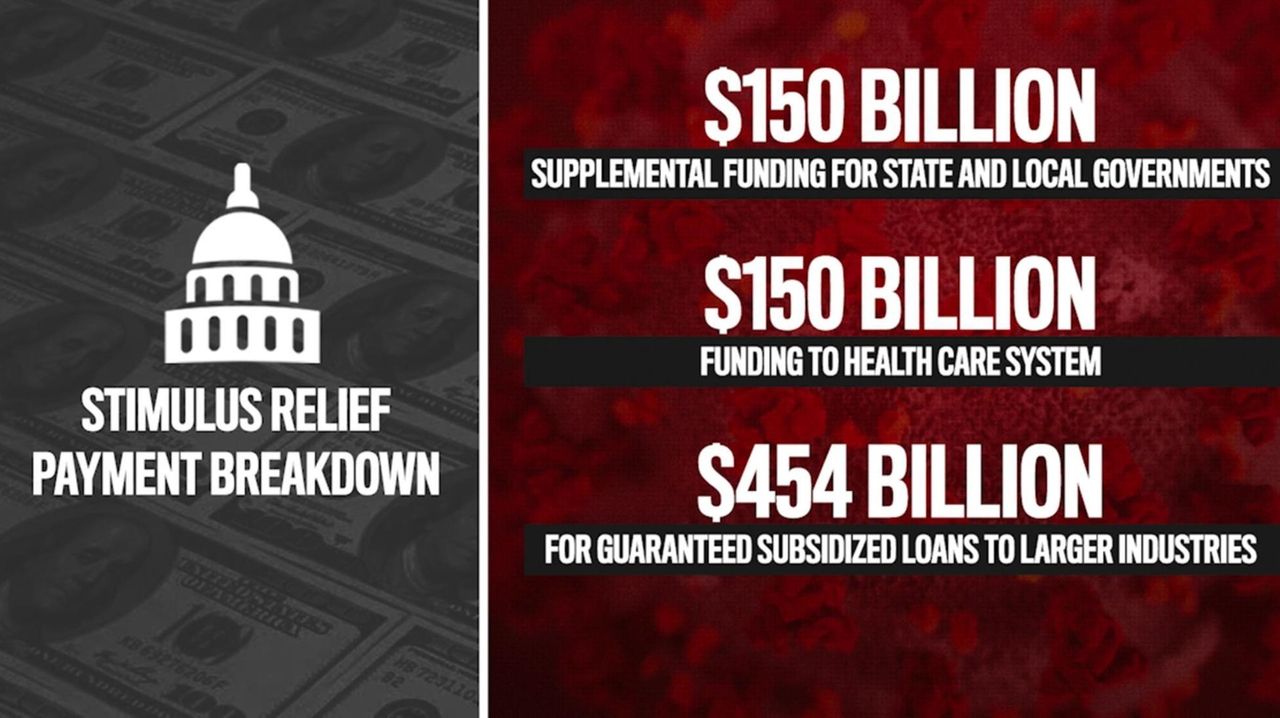 WASHINGTON — The $2.2 trillion emergency coronavirus package offers New Yorkers hit hard by the pandemic tens of billions of dollars in relief, but for most of the financial lifeline, they must take the first step by asking for it.

While the IRS will automatically send $1,200 to individuals and $2,400 to couples that qualify, it will be up to laid-off or furloughed workers, struggling small businesses and nonprofits, and battered large corporations to apply for most of the relief package’s benefits.

Lawmakers and federal officials promise a quick injection of cash, but the $800 billion stimulus passed in 2009 for the Great Recession and the $60 billion package for superstorm Sandy offer cautionary tales on just how long it can take big government to deliver big money.

Yet Treasury Secretary Steven Mnuchin said Thursday that he expected the $1,200 cash payments to individuals go out in three weeks to qualified taxpayers who filed electronically, though it could take longer for those waiting for a check in the mail.

And Senate Minority Leader Chuck Schumer (D-N.Y.), who shaped the package in tough negotiations, and Sen. Kirsten Gillibrand (D-N.Y.) said the aid package was set up to move the money as quickly as the next two to three weeks.

“The idea is to get the money out very, very quickly,” Schumer said.

Here are some pools of COVID-19 disaster funding that New Yorkers can tap into from the new relief package and President Donald Trump’s federal disaster declaration for New York.

About $15 billion of the $260 billion expansion of unemployment insurance will go to New York full-time workers, freelancers, and Uber and Lyft drivers laid off or furloughed during the pandemic. Those who qualify will get 13 weeks of their pay plus $600 a week extra. Some delays in getting aid seem likely — the New York State Department of Labor is swamped. But Schumer said, “The standards that you usually need to get unemployment insurance are reduced dramatically, and we give money [to administrators] so they can rapidly hire people to online register people for the unemployment. They’ll have to test them to certify, but that's it,” Schumer said. To apply, go to https://labor.ny.gov/ui/how_to_file_claim.shtm or call 1-888-209-8124.

New York and Long Island small businesses could reap tens of billions of dollars from the $375 billion for loans, grants and payments. Small businesses and nonprofits can apply for economic injury disaster loans of up to $2 million with low interest rates; zero-fee loans of up to $10 million with deferred principal and interest for up to a year if they retain employees at their salary level; and SBA payment of all loan payments for six months for existing borrowers. But businesses likely will have to wait a month or more for a check after they apply for the loan or grant, according to Long Island’s SBA branch manager. To apply, go to https://disasterloan.sba.gov/apply-for-disaster-loan/index.html or call 800-659-2955.

New Yorkers who need help with groceries or meals will benefit from several streams of money that aim to ensure that no one goes hungry during the pandemic. The Supplemental Nutrition Assistance Program, known as SNAP, got a boost of $15.5 billion nationally in anticipation of a surge in need. Go to https://www.mybenefits.ny.gov/mybenefits/begin to apply. The bill also includes $8.8 billion nationally for Child Nutrition Programs and $450 million nationally for food banks. For Long Island, go to https://www.licares.org/get-to-know-us/our-programs/childrens-nutrition-programs/

FEMA will provide COVID-19 disaster assistance to New York after Trump designated New York State as a major disaster area on March 20. The state, Native American tribes, eligible local governments and some private nonprofits can apply to get 75% of costs covered for emergency protective measures. Also funded is crisis counseling for individuals. Gillibrand and Schumer on Monday asked for approval of all assistance New York requested. FEMA referred questions about the amount and distribution of funds to the state. But state Budget Division spokesman Freeman Klopott said in an email, “We continue to await guidance from FEMA on how much funding New York State and localities will receive as a result of the President’s disaster declaration.”

New York and Long Island hospitals and medical facilities will be able to request tens of billions of dollars of reimbursements for care-related expenses such as testing supplies and personal protective equipment, as well as for lost revenues. Hospitals also will get Medicare rate increases, payroll tax relief, deferred cuts to Medicaid funds to cover uncompensated costs, and hospital preparedness money from a $150 billion fund. Hospitals will apply to the U.S. Department of Health and Human Services and will be reimbursed on a rolling basis, with the possibility of some prepayments or retrospective payments, according to the Greater New York Hospital Association. “With the hospitals, the money should be there in a week or two,” Schumer said.

New York State could get about $1 billion for schools from a $30 billion national education stabilization fund, according to Schumer. The money will pay for a wide range of needs for elementary and high schools, many of them closed, including online classes, continuing meals for students who need them, and cleaning and sanitizing classrooms and buildings. New York’s colleges and universities also will get hundreds of millions of dollars. The state and each higher-education entity must apply for the funds in a process limited to two months. The state then has a year to distribute the funds to school districts.

Struggling large New York businesses will be able to request loans, loan guarantees or other investments from a $500 billion fund directed by the Federal Reserve and treasury secretary and overseen by a special inspector general and an oversight commission appointed by congressional leaders. Businesses can start to apply as soon as Mnuchin issues the rules for applications. He has 10 days to do that.