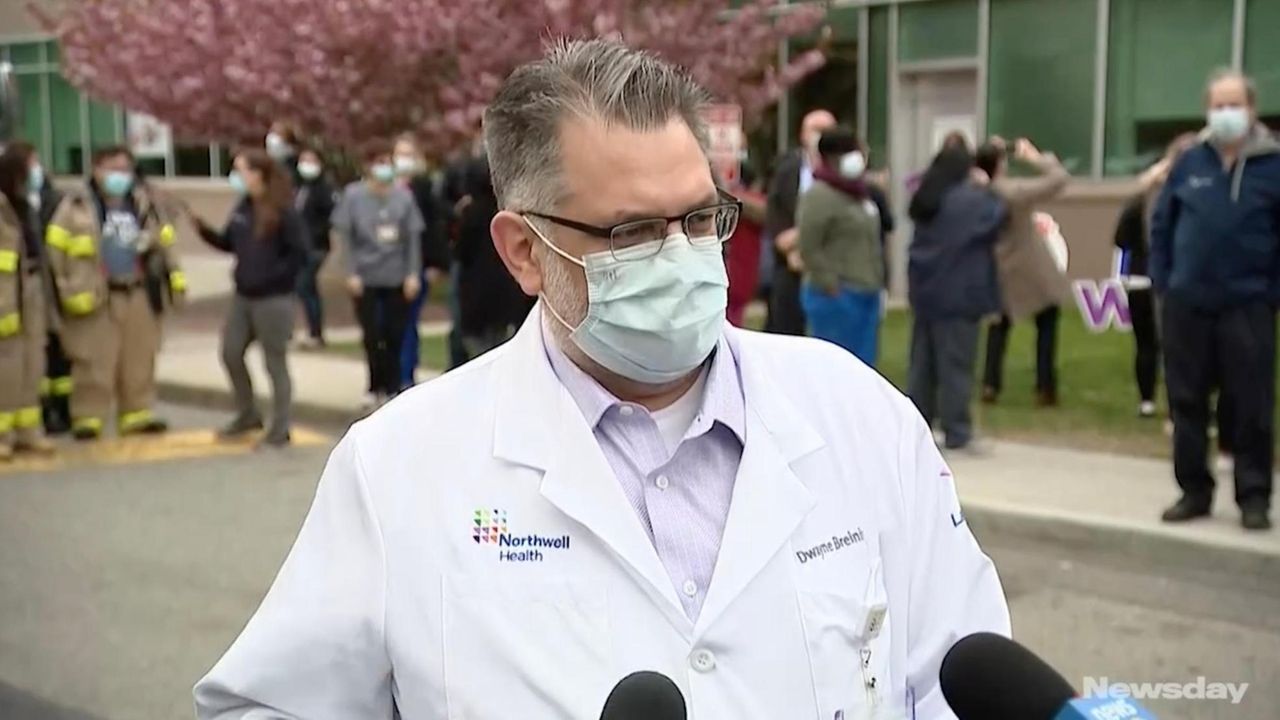 Dr. Dwayne Breining, director of pathology and laboratory medicine at Northwell Health Labs, spoke on Monday about the antibody testing that is being performed on front line staff members. Breining said he hopes to eventually bring the testing to the general public.  Credit: News 12 Long Island

Plans to reopen the economy and resume even a semblance of socializing will require subjecting hundreds of thousands of seemingly healthy people — and perhaps millions — every day to coronavirus testing, according to experts tracking the pandemic in real time.

Nasal swab testing for the presence of the virus, now chiefly taking place in hospital parking lots and emergency rooms, would have to increase in both numbers and in locations — to primary care doctor’s offices, diagnostic testing centers and even workplaces.

Right now, the overwhelming majority of tests are administered to people who are experiencing severe symptoms, such as fevers and difficulty breathing. Health authorities have used these tests largely to confirm whether sufferers have contracted the virus, rather than to reduce contagion.

Expanded testing would identify — and help isolate — people who have been infected with the virus but who show either no symptom or minimal ones.

So-called asymptomatic carriers can unknowingly transmit the disease for up to 15 days before their illnesses emerge — if they emerge at all — propelling the virus through ever larger chains of unwitting hosts.  Removing hidden carriers from circulation would help break the chains.

At the same time, the experts say, massive nationwide or regional testing programs would lead to a clearer profile of the virus, including: how many people truly have it, how fast it spreads, how many people get reinfected, and the quick identification of hot spots.

Testing and the analysis of results is largely performed by private companies that have been overwhelmed by demand.

Gov. Andrew Cuomo, for one, has for weeks cited the need to expand testing as key step in reopening the economy.

“All of this volume is descending on these private-sector testing companies that never anticipated this tremendous volume,” Cuomo said Wednesday. “They’re getting calls from everybody, ‘I need more.’ So, you have this hole, it’s complicated chaotic. Can the federal government do this? No. Can the state? No. Can anyone? No. But we have to figure it out.”

As of April 20, U.S. health authorities across the country have ramped up testing to 167,330 each day, for a total of 3.86 million since Feb. 28, far below the up to 27 million promised by the White House in mid-March.

As of Sunday, 134,613 Long Islanders had been tested (69,293 in Nassau, 65,320 in Suffolk) since testing began here in mid-March, according to Newsday-compiled state and local figures.

Long Island’s testing has far outpaced the U.S. national average of around 50 tests per 100,000 people. It has also exceeded the statewide rate, which is among the country’s highest.

“We need to be testing people who aren’t sick,” said Sean Clouston, associate professor for Stony Brook University’s Program in Public Health at the Renaissance School of Medicine.

Why blood tests for Covid-19 antibodies have become key

Clouston said he believes that Long Island would have to triple or quadruple its current testing levels to establish a baseline for the region before reopening.

Stay-at-home orders and social distancing have reduced the COVID-19 rate of the most serious illnesses — although the virus remains in wide circulation, according to public health authorities.

They warn that sicknesses and death would spike within a few weeks if people were simply to return to work and social activities.

“Widescale testing is one of the only ways to figure out how to balance the needs of the health care system with the needs of the economy,” said Clouston, who has been modeling potential infection scenarios against Stony Brook University Hospital’s capacity levels.

“To the extent we are going to open up, we can’t do it until we know how many have been infected and who they are. Once that happens we can start to manage the disease.’

On the high end of potential testing scenarios, New York University economist and Nobel laureate Paul Romer presented models that examined the potential of testing every U.S. citizen every two weeks as a method to contain the disease by weeding out carriers.

Over 500 days, each U.S. citizen would have been tested 30 times, with those testing positive isolated. But the model assumes both public compliance and wide-scale availability of testing supplies, equipment and personnel, something that does not now exist.

Harvard University’s Edmond J. Safra Center for Ethics estimates “at least millions and possibly hundreds of millions of tests per day will be needed” to contain the disease, even with high-tech tracing technology to help reduce contacts with the infected.

At a bare minimum, said Harvard University's Global Health Institute, 500,000 people would have to be tested per day to get a better understanding of the number of undiagnosed cases across the country.

Health authorities also want to know how often tests turn up infections as a bench mark for determining how safely society can reopen.

At current rates of testing, the positive test rate in the U.S. is on the order of 20%, compared with around 3% in South Korea and 7% in Germany, where testing is more widespread. The high U.S. positive test rate "likely reflects inadequate testing," the Harvard Global Health Institute said.

“There’s no getting around that we need more tests than we have now,” said Thomas Tsai, a researcher at the Harvard T.H. ChanSchool of Public Health, one of the study's authors.

Yet Tsai said the call by some epidemiologists for millions of molecular tests a day is not realistic, but current levels are inadequate.

Realistically, said Mark McClellan, director of Duke University’s Robert J. Margolis Center for Health Policy, the U.S. falls far short of having the capacity to scale up quickly to such enormous level of testing. He believes that authorities could expand testing to conducting 2 million to 3 million tests a week within a few months.

McClellan was among the authors of a March 28 white paper by the conservative-leaning American Enterprise Institute that calls for testing of around 750,000 a week as one of the first milestones to reach before reopening businesses and society.

AEI also identified a need to invest in “new tools to make it efficient for providers to communicate test results and make data easily accessible to public-health officials working to contain future outbreaks.”

Bottlenecks in the production of testing equipment has been a roadblock to profiling the virus in the U.S. Testing companies indicate that they will eventually build the capacity to conduct widespread testing.

Testing giant Abbott Labs said it’s ramping up production of tests that can show positive or negative results for COVID-19 in five to13 minutes. The company expects use of its tests to climb from around 4 million this month to 20 million a month in June.

That would translate to nearly 700,000 tests a day, far above the current national figure of 167,300, according to COVID Tracker, which counts the number of tests performed in every state. The Abbott tests have been used to screen guests at the White House.

Achieving the goal of wider testing would require not only additional equipment and trained testers, but logistics to alert people where to go, large amounts of personal protection equipment, and an army of trackers to locate contacts of the infected.

Repeat testing of those who’ve tested negative for the virus will eventually become part of the pandemic ritual, experts say, but it may be a luxury in the short term, with COVID-19 still infecting tens of thousands across the country.

And while he expects testing will become more widely available once the U.S. does meet the challenge, he said there will be limits to the availability. Will there, for instance, be COVID-19 testing at your local McDonald’s? “I don’t think so,” he said.

With Ken Schachter and Matt Clark

Why blood tests for Covid-19 antibodies have become keyKnown as a serosurvey, such widespread testing will come next as the focus shifts to reopening the economy. Army of contact tracers crucial to containing coronavirus spreadGov. Cuomo's plan to reopen the economy hinges on hiring and training them across LI and beyond at an unprecedented scale, officials say.   Making sense of COVID-19 testingWe have answers to key questions about coronavirus testing as Long Island, New York and the nation work toward facilitating it on a mass scale.

Novavax: Large study finds COVID-19 shot about 90% effective
2:38
A year later, LIers still have lasting effects from COVID-19
COVID-19 cases keep dropping in New York
1:20
Taking the spa on the road
FDA: Some J&J vaccine doses can be used, but many must be tossed
LI winner of NY vaccine scholarship 'so happy' about her lucky shot
Didn’t find what you were looking for?