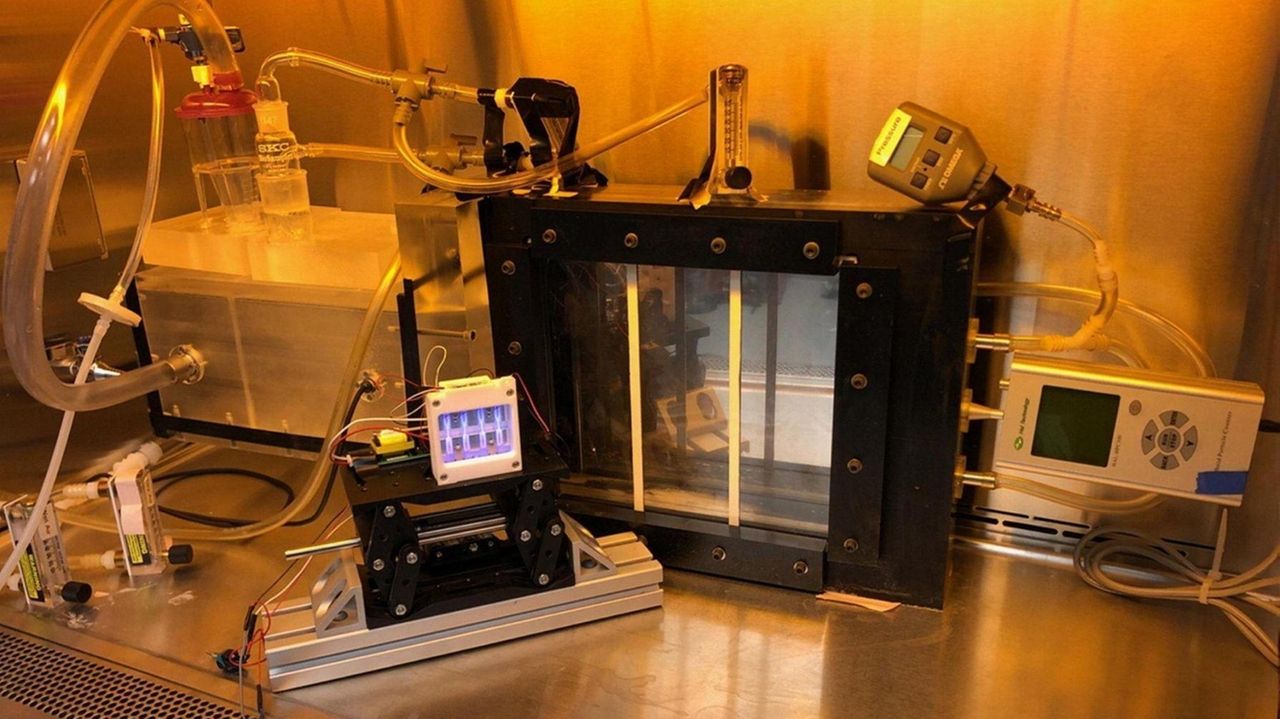 David Brenner, director of the Center for Radiological Research at Columbia University's Irving Medical Center, talks about developments made in UV light research that can help to prevent viral spreads, like the COVID-19 pandemic, in the near future. Credit: Newsday

Studies by a team of Columbia University researchers show that a narrow-wavelength band of ultraviolet light kills airborne viruses, like COVID-19, without damaging human skin or eyes.

Narrow-wavelength light holds promise for curtailing the rapid spread of viruses in the future, researchers said. The new technology would allow people to be in proximity to one another without fear of widespread infection, said David Brenner, director of the Center for Radiological Research at Columbia University’s Irving Medical Center.

“I think it’s the only technique we have for preventing transmission person to person in an occupied setting,” he said.

President Donald Trump on April 23 suggested using ultraviolet light inside the human body as a means of killing the coronavirus, prompting a chorus of criticism because conventional germicidal ultraviolet light, while used to disinfect empty hospital operating rooms and ambulances, is known to cause skin cancer and cataracts.

Researchers: Far-UVC light kills virus without skin or eye damage David Brenner, director of the Center for Radiological Research at Columbia University's Irving Medical Center, talks about developments made in UV light research that can help to prevent viral spreads, like the COVID-19 pandemic, in the near future. Credit: Newsday

The type of light studied by the Columbia researchers would not be put inside the human body. It differs from conventional germicidal ultraviolet light because it is near the end of the ultraviolet spectrum and cannot deeply penetrate human skin. Called far-UVC light, it kills 99.9% of airborne viruses even at very low exposures, Brenner said.

The new technology is safe and “it kills microbes — even superbugs,” he said.

The coronavirus is highly contagious, in part because tiny droplets of the virus can stay in the air for more than an hour. The appeal of far-UVC light is that it can kill the virus before it enters the body, he said.

Researchers at the lab, which is the country’s oldest and largest radiation research lab, have been studying far-UVC light for nearly five years. They have done studies on two less virulent coronaviruses, similar to common colds, and found the light effective in killing them.

The researchers also have begun a study specifically on the COVID-19 coronavirus and surfaces like metal, cardboard and plastic, but there are no results to report yet, said Manuela Buonanno, associate research scientist at the center.

In its experiments, the research team uses lamps that emit continuous low doses of far-UVC light. They found the lamps effective in killing the H1N1 influenza virus, as well as drug-resistant bacteria like MRSA. In addition, the team has done multiple studies on mice and humans that show no damage to skin or eyes, he said.

Researchers are in the midst of their first long-term study of the effects of the far-UVC light, a 60-week exposure safety study in which 100 hairless mice are being exposed to high levels of it for eight hours a day. That is important, Buonanno said, because cancer and cataracts take time to develop.

More than halfway through the study, researchers have seen no skin or eye damage in the mice, Brenner said.

“They’re all pretty happy,” he said of the mice.

Unlike traditional lamps using ultraviolet light, these lamps do not cause any redness of the skin, Buonanno said. They are filtered to ensure that only far-UVC light is emitted.

Two companies, one based in Japan and the other in Illinois, have begun producing the lamps and hope to ramp up production by the fall. Brenner is not associated with the companies.

He hopes to see far-UVC lamps installed overhead in airplanes, classrooms, shops, restaurants and other indoor public places to prevent the spread of the next big pandemic or seasonal flu. Estimates put the cost of the lamps between $500 and $1,000 and that would come down after mass production.

“It’s a potential game-changer," he said.