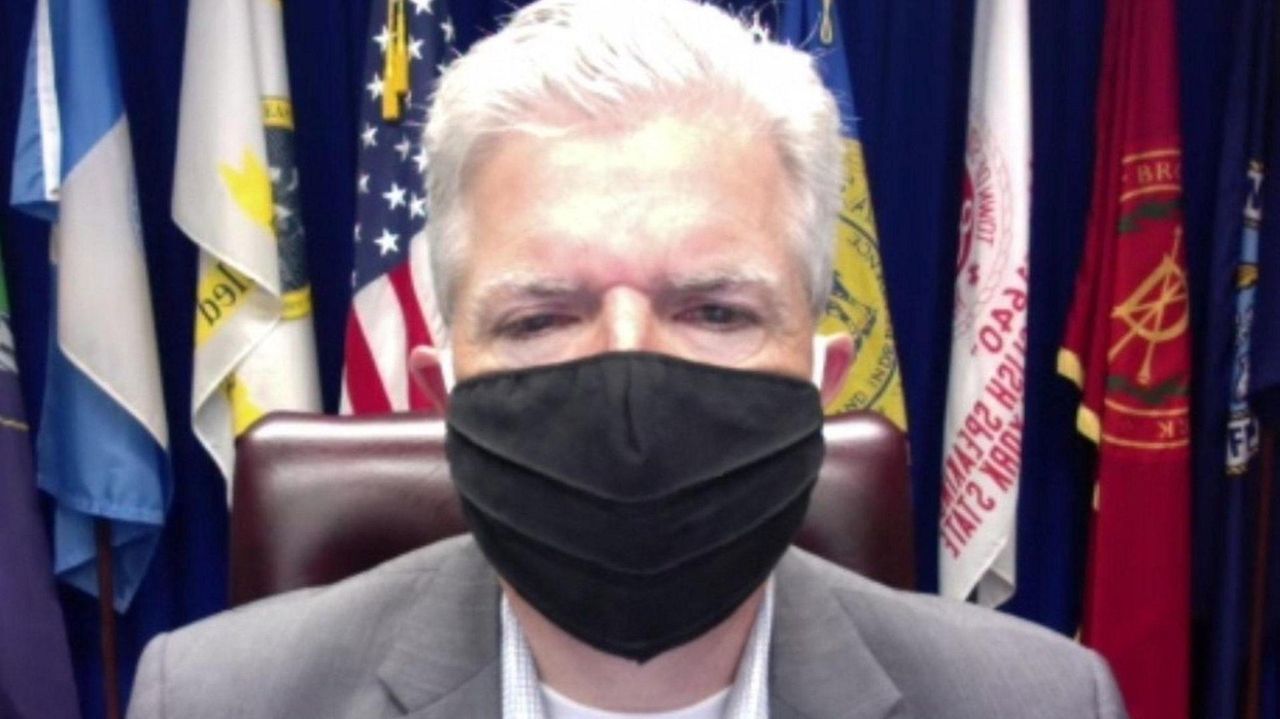 This story was reported by Robert Brodsky, Zachary R. Dowdy, Bart Jones, David Reich-Hale and Yancey Roy. It was written by Jones.

They were part of a recent rise in cases that has brought concerns that Long Island may be slipping in efforts to keep the coronavirus under control.

The county said it is performing contact tracing for other Fourth of July parties as well.

The cases cropped up as the positive testing level on Long Island jumped to 2% on Monday and the total number of daily confirmed cases surpassed 100 people in Suffolk for the first time in weeks.

Bellone vowed to step up enforcement of directives meant to limit the spread of the virus.

The four who tested positive were among 18 people who attended the party, for a total of 22% infected, officials said. It was not immediately clear if the guests at the party were wearing masks or socially distancing.

Cuomo initially announced that 35% of the partygoers became infected, but Suffolk officials disputed that figure. The state later Tuesday adjusted its figures.

Part of the confusion came, apparently, because three other partygoers were initially believed to have tested positive but their results came back negative, Suffolk officials said.

No citations were issued for the party since gatherings of up to 25 people are permitted on Long Island, which is in Phase 4, the final step of reopening.

Officials said the lifeguards contracted the virus at off-hours gatherings, not while on duty.

“We’re just trying to be diligent and make sure no more cases take place,” said Robert Kolar, chief lifeguard of Smith Point Lifeguards, which is composed of 80 lifeguards who cover Suffolk’s beaches.

None of the 10 affected lifeguards, ranging in age from the late teens to the early twenties, have developed serious symptoms, but their contracting the virus puts a strain on the others, Kolar said.

“We’re real shorthanded here, so we’re trying to do the best we can to cover the beaches,” said Kolar, who added that he understands the lifeguards attended a Fourth of July event.

One young woman came down with symptoms and tested positive. Then the rest of them were tested, as well as the whole lifeguard staff, Kolar said, adding that the results also yielded “a lot” of negatives.

The level of people testing positive for the coronavirus was 1.5% statewide on Monday, Cuomo said. Long Island's 2% level was the highest of any region in the state, outpacing even New York City, which was at 1.4%.

"It's also clear based on contact tracing that many of the new cases in New York are a result of a lack of compliance during the July 4th weekend and illustrate how quickly the virus spreads, with one party, for example," Cuomo said.

“I cannot be more clear: Look at what's happening in the rest of the country — if we are not smart, if we don't wear masks and socially distance, cases will spike. No one wants to go back to the hell we experienced three months ago, so please stay vigilant."

"The success of our efforts depends on citizens' willingness to comply with state guidance, socially distance, wear masks and wash their hands, and rising cases around the country continue to threaten our progress, which is why four new states have been added to New York's travel advisory,” Cuomo said.

The state added Minnesota, New Mexico, Ohio and Wisconsin to the list of a total of 23 states. Travelers coming from those states must self-quarantine for 14 days upon arriving in New York.

In an unusually stern and serious media briefing Tuesday, Bellone pleaded for greater compliance with social distancing and facial coverings.

He wore a black mask on the video conference to highlight his point.

"Wear a mask. Wear a face covering because this is how we are going to beat this virus,” he said. "There is too much at stake for you not to … If all of us put on a face covering now for the next four to six weeks we would drive this epidemic to the ground. That is my major concern today; driving this epidemic to the ground. This is what we’ve done in New York and we’ve come too far to move in the other direction now.”

The 102 people in Suffolk who tested positive for the virus marked the first time the county has seen triple digit infections since May 31. It brought the total to 42,214 since the pandemic began.

Bellone: 'Too much at stake'

Even more troubling, Bellone said, is the overall infection level, which hovered for weeks at 1% but has now more than doubled to 2.1%. If the Long Island infection rate climbs to 5%, the county would not be able to open schools in the fall and would have to slow down or scale back its economic reopening, Bellone said.

“If you somehow thought the fight was over and this was over, think again,” Bellone said. “Look at what’s happening around the country. Look what’s happening in Texas and Florida, places where they essentially declared victory not too long ago. This is not going to be over until we have an effective proven vaccine or drug treatment. And we have too much on the line to let up now. There is too much at stake.”

“My message to these young people who think this virus doesn’t impact them is to think again,” Bellone said. “The truth is this virus impacts all of us. For the most part, it may not impact young people physically, but we know they spread it and it can affect more vulnerable people that they know and love.”

Bellone urged Suffolk residents who attended Fourth of July gatherings to be sensitive to how they are feeling and, when in doubt, to get tested.

Of 60,045 people tested for the coronavirus Monday in New York, 912 were positive, according to state data released Tuesday.

The daily death toll in the state was five.

The increase in percentage of tests that have come back positive shouldn’t send off alarm bells yet, said Dr. David Battinelli, chief medical officer at Northwell Health.

“We should keep watching it, but we can’t react to anything that small,” he said. “We aren’t seeing this increase at hospitals.”

Northwell Health hospitals on Tuesday continued to report progress in a decreasing count of coronavirus patients, with 114 being treated at the 19 hospitals it owns and operates in the New York region. That was down from 125 patients during the same period a week ago.

“The masks are key," Battinelli said, "because we know the main source of spread are from droplets.”