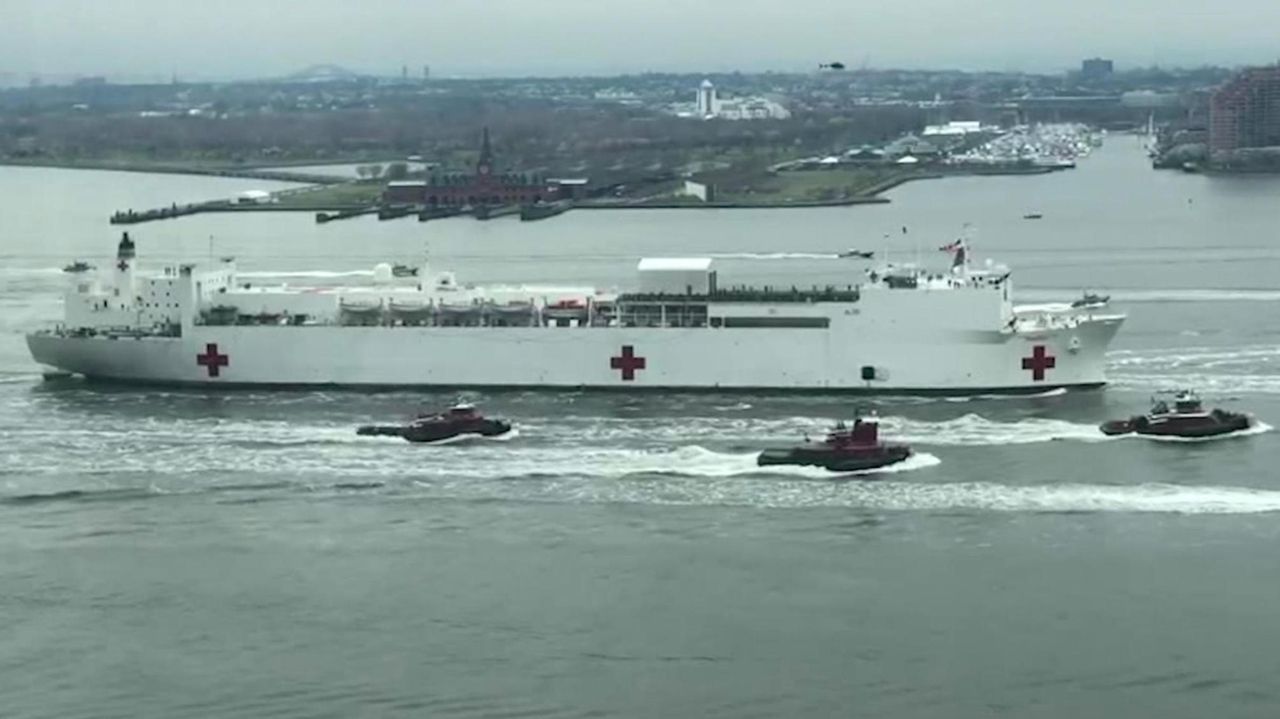 On Monday, the USNS Comfort docked off the west side of Manhattan. New York Mayor Bill de Blasio said the 1,000-plus bed Navy medical ship is providing a tremendous morale boost to his embattled city.  Credit: News 12 Long Island

The USNS Comfort, a 1,000-plus bed Navy medical ship that has participated in military and humanitarian operations around the world, arrived in New York Harbor Monday to tackle its next mission: providing relief to a city crippled by the coronavirus pandemic.

Mayor Bill de Blasio called the Comfort, an oil tanker converted in 1987 into a floating medical facility with 12 fully equipped operating rooms, a “beacon of hope” as New York braces for anticipated spikes of coronavirus cases and deaths in the coming weeks.

The mayor grew emotional as he watched the massive white ship emblazoned with red crosses plow through the waters of the harbor and dock at Pier 90 on Manhattan’s West Side. The ship will remain there as long as it is needed, officials said.

“I had this incredible feeling of peace actually, that help was finally coming, that we were not alone,” de Blasio said after welcoming the Comfort at Pier 90.

The hospital ship will immediately start accepting patients, the mayor said. Neither the ship nor the 1,000-bed field hospital constructed at the Jacob K. Javits Convention Center, which Gov. Andrew Cuomo said became operational on Monday, will accept patients with the coronavirus.

Both facilities will provide surgeries and other care to patients not infected with the virus while the city transforms entire hospitals into intensive care units. Navy officials have called the Comfort a “relief valve” for New York’s struggling health care system.

The medical ship and the convention center are not the only unconventional medical facilities the city is using to battle the coronavirus, which has killed more than 1,200 people across New York State. Hospital tents constructed in Central Park were also set to become operational Monday, officials said. The tents, near Columbus Circle, will serve as a triage unit for nearby Mount Sinai West medical center.

De Blasio said the city has just enough medical supplies to get through Sunday, and he also called on the federal government to send medical personnel to relieve New York’s stressed health care workers.

“If we don’t get reinforced, particularly with ventilators and more medical personnel, after this coming Sunday, we’re really going to have a problem ensuring that everyone who needs care gets it,” de Blasio said earlier Monday on CNN.

It took a herculean effort just to get the Comfort, which departed from Naval Station Norfolk in Virginia on Saturday, to the city, de Blasio said. The ship was undergoing maintenance that was expected to last two weeks when President Donald Trump promised to deploy it to New York, but that work was sped up and accomplished in eight days.

The Army Corps of Engineers and the city’s Economic Development Corporation, meanwhile, led efforts to speed up dredging at Pier 90 to make room to accommodate the massive medical ship. The dredging was expected to be completed Sunday, but the work was put on the fast track after Trump announced the deployment of the Comfort.

This isn’t the Comfort’s first trip to New York. The medical ship served as a base for relief workers after the 9/11 attacks in 2001.