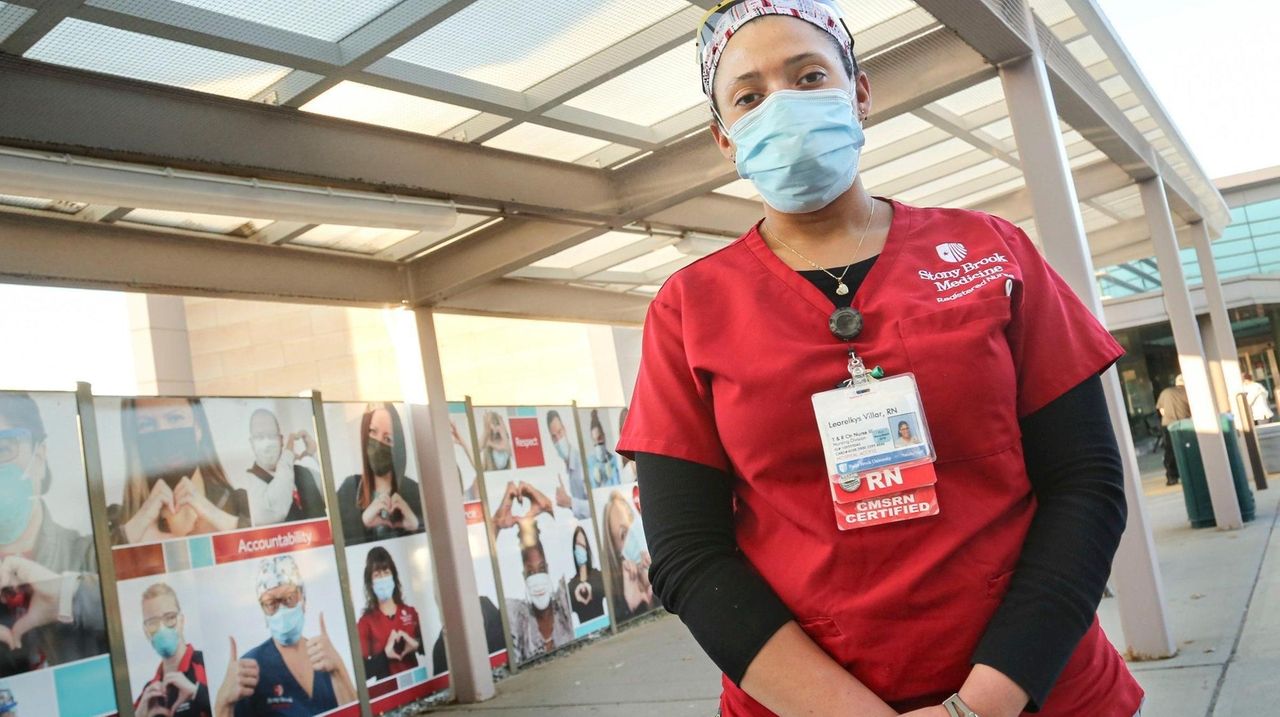 Leorelkys Villar, an assistant nurse manager at Stony Brook University Hospital, spoke to Newsday about the importance of getting the COVID-19 vaccine and acknowledged those who have reservations about taking it.  Credit: Newsday / John Paraskevas

One-on-one conversations, forums, posters, videos and other strategies are being used to persuade more employees of Long Island hospitals to get vaccinated against COVID-19, as the region remains last in hospital-worker vaccinations in the state.

"A lot of this will be convincing people through education," said Joe Moscola, senior vice president at New Hyde Park-based Northwell Health.

Health care workers remain the state’s top vaccination priority, Cuomo said, because if too many get sick from the coronavirus and COVID-19 cases increase, "hospital capacity will collapse."

Officials say rates vary widely within hospitals. At Northwell, 87% of doctors were vaccinated as of Wednesday, compared with 45% of nurses and 32% of hospitality and dietary employees, which includes room cleaners and food-service workers, Moscola said.

Doctors who have examined vaccine data have headed meetings to address concerns, he said.

Glatt and other clinical leaders will talk with any employee about vaccines, hospital spokesman Joe Calderone said.

"That open dialogue back and forth has helped tremendously," with some employees dropping their reluctance to get vaccinated after talking with Glatt, he said.

John Donnelly, chief operating officer of NuHealth, which runs Nassau University Medical Center, said "the hospital reflects the general population" in attitudes on vaccination, including in how some prefer not to be among the first to get the vaccine, but may take it later.

A Kaiser Family Foundation survey released Dec. 15 found that 29% of those who work in a health care setting said they would probably or definitely not get vaccinated, slightly above the 27% in the general public.

That survey and others have shown that Black Americans are among those most hesitant.

Donnelly said Dr. Anthony Boutin, NuHealth’s CEO and chief medical officer, who is Black, "is literally walking the halls of the hospital to talk to staff, especially people of color, to allay any fears people may have about the vaccinations."

The public looks to medical professionals for guidance, said Loretta Willis, vice president for quality advocacy, research and innovation at the Healthcare Association of New York State, which represents hospitals and other health care institutions.

"Participation in the vaccination process is important for the community to see, because they do look at us as the ones who are basing our decisions on the science," she said.

Three of the four hospitals with the lowest employee vaccination rates are affiliated with Catholic Health Services of Long Island, which did not respond to requests for comment. Two other Catholic Health hospitals had among the highest rates.

At Long Island Community Hospital in Patchogue, all front-line employees who initially requested a vaccine received one, "and since that time, other employees have stepped forward to request a vaccine, which will be administered once we receive a new allotment," the hospital’s president and CEO, Richard Margulis, said in a statement.

At NYU Langone Hospital-Long Island in Mineola, where the vaccination rate was 59%, fewer than 15% of employees explicitly opted out of getting vaccinated, the hospital said in a statement.

Some employees expressed concern about potential negative effects on fertility or pregnancy, even though there’s no evidence the vaccines affect fertility or harm the fetus, hospital officials said.

Dr. Foula Kontonicolas, a critical care surgeon at South Nassau, is 30 weeks pregnant and initially had vaccine concerns. After conferring with obstetricians, she got vaccinated.

"The risk of having COVID so far outweighs the potential risk from getting the vaccine," she said.

Pregnant women with the coronavirus have a higher risk of severe COVID-19 and may be more likely to have a preterm birth, according to the Centers for Disease Control and Prevention.

Leorelkys Villar, a Stony Brook University Hospital nurse who was vaccinated, knows how deadly the coronavirus can be, from the patients she has seen die to the passing of her 38-year-old brother from the disease.

"If you get COVID, you could potentially pass it on to your patients or your colleagues, and it’s your duty to try to mitigate any risk" by taking the vaccine, Villar said. "On a personal level, it’s also your duty to your family and to your community."

Cuomo: NY vaccine allocation to increase, but long slough aheadThe increase is expected under stepped-up production promised by President Biden, Cuomo said. That would still mean it would take the state until late June to vaccinate the 7 million people who are currently eligible. Dr. Anthony Fauci answers LIers' questions about COVID-19 vaccinesLong Islanders submitted more than 2,000 questions to Dr. Anthony Fauci. He couldn't answer all of them, but he did answer a number about coronavirus vaccines and what we should expect. Get answers to your questions about the COVID-19 outbreak Newsday is committed to answering your questions about the coronavirus outbreak, from the best ways to avoid exposure to who is eligible for testing, and more. Here you'll find links to all our guides. Check back often as we continue to update this page. Resources to help you during pandemicNewsday has compiled this list of telephone numbers, websites and other resources to help you navigate life during coronavirus.