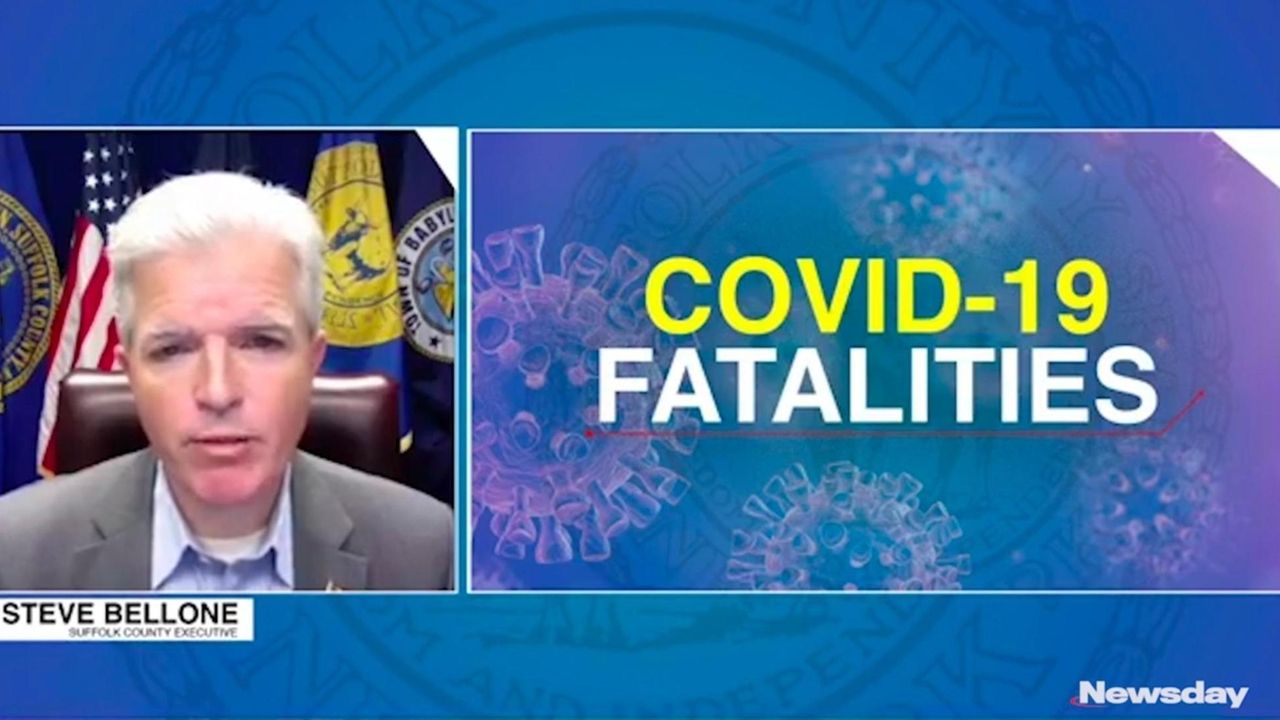 The county reported 34 deaths in the first eight days of December, compared with 26 from August to October, he said.

Suffolk's death figure from COVID-19 was as low as six for the month of October. It was five for August and 15 for September. The number increased to 35 for November.

As the number of people hospitalized with COVID-19 — currently 394 — rises amid a second surge of the virus, the number of deaths is also going up, Bellone said.

"These numbers are a stark reminder of the dangers this virus poses," Bellone said at a virtual news conference. "Everything we’ve done and continue to do is fundamentally about protecting public health and saving lives. Wearing masks and social distancing can literally save lives."

County Executive Laura Curran said 23 people died of the virus in Nassau in the past seven days — "the highest total in months."

"What's happening right now is a devastating pattern we've seen before: first the positivity rate goes up, then hospitalizations rise, and inevitably more people pass away," she said in a statement Thursday. "My Administration is prepared for this to get worse before it gets better," though she urged people to redouble their "resolve to ensure everyone gets to the other side of this crisis."

While Bellone and Curran delivered that grim news, Nassau University Medical Center officials said they expected to receive their first batch of COVID-19 vaccines this weekend, some 975 doses from Pfizer that they would likely distribute early next week at a hospital, health centers and a jail.

Those receiving the first batch likely will include employees at Nassau University Medical Center and federally qualified health centers, along with medical personnel at the county correctional facility in East Meadow, where NUMC runs the infirmary, said Dr. Anthony Boutin, chief executive and president of NUMC.

No prisoners will get the vaccine, he said in an interview Thursday. Boutin himself expects to receive the vaccine some time next week.

Long Island is to receive a total of 26,500 initial doses of the vaccine from Pfizer as soon as this weekend as part of a first batch of 170,000 doses reserved for nursing home residents and staff and high-risk health care workers statewide, Gov. Andrew M. Cuomo said Wednesday.

New York City is slated to receive 72,000 initial doses. New York State's delivery is part of 6 million vaccines nationwide the federal government is allocating to each state based on population.

An advisory panel of the U.S. Food and Drug Administration on Thursday approved the Pfizer vaccine, likely clearing the way for final approval and delivery of the COVID-19 vaccine within days.

Ninety-two people died of COVID-19-related causes on Wednesday statewide, and 5,164 were hospitalized — up 171 from the previous day.

Officials say they expect the surge to continue through the holiday season to at least mid-January.

NuHealth, the public benefit corporation, will handle vaccine distribution at the hospital, correctional center infirmary, and health clinics, Boutin said. The federal government is partnering with Walgreens and CVS to vaccinate nursing home patients and staff, including at the A. Holly Patterson Extended Care Facility in Uniondale.

Boutin said he’s providing the doses to 130 employees at the correctional center "that work for NUMC," including physicians, nurses, pharmacists, dentists, and aides.

At the hospital, vaccines would go to workers deemed essential on the front lines, including housekeeping, physicians, physician assistants, and nurses.

It might not be until late January, February, March, or even April that patients at hospitals, clinics, and health centers are vaccinated, Boutin said.

Boutin, who also spoke Wednesday night at a hospital board meeting, said NUMC had 32 COVID-19 patients.

He said staff should be bracing for a surging caseload over the next month. "It’s going to be a brutal 30 days."

He said the school system must help overcome "learning loss," and the plan starts in the next school year, in September 2021, with the foundation put down in this academic year.

In the Long Beach school district, Lido Elementary School and the prekindergarten school will be closed to in-person instruction until Dec. 21, Superintendent Jennifer Gallagher said.

"In the case of Lido, we now have five staff positives, twenty staff members in quarantine, and a number of other staff out with other illnesses, including the flu. None of the positive staff members contracted COVID in school," Gallagher wrote on the district website, cautioning that other closures could follow including at the middle and high schools.

"I have already received some angry emails from parents, questioning why we didn't plan for this. We DID plan for this … This is not anyone's fault — it is the fault of COVID, the flu, and other seasonal illnesses," she said.

Islip announced that it was extending remote instruction at its high school, which began Nov. 30, and at its middle school, which began Dec. 1. The extension was prompted by the discovery of several new cases over the weekend, and the district hopes to reopen both schools Monday.

"Unfortunately, we had a spike in the number of positive cases," said Superintendent of Schools Dr. Ellen Semel.

Northwell Health on Thursday said it had 811 hospitalized COVID-19 patients at the 19 hospitals it owns and operates, up from 644 the same period last week. In April, Northwell had more than 3,400 COVID-19 patients.

With the start of Hanukkah on Thursday, Bellone warned about the risks of small indoor gatherings with friends and family.

None of the events, Bellone said, violated the state’s 10-person gathering limit, "but that does not mean that the virus won’t spread or you won’t have a spreader event … We are seeing this happen at birthday parties, dinner parties and gatherings between family and friends, ultimately turning into COVID-19 spreader events."

Should I be scared to take the vaccine? Experts say noWhen will the coronavirus vaccine be available to all Long Islanders? Is it safe? Will it cost anything? We answer many of your frequently asked questions here.

1:26 State sees decreasing virus positivity, but LI yields higher rate
4:01 COVID-19: From 799 deaths in one day to vaccine being 'passport' back to normalcy
2:15 Johnson & Johnson vaccine has arrived on Long Island
What you need to know about COVID-19 vaccine development
2:29 LI's 1st COVID patient reflects 1 year later: 'I'm one of the lucky ones'
Standardized testing in the pandemic: What will it be like for kids and teachers?
Didn’t find what you were looking for?