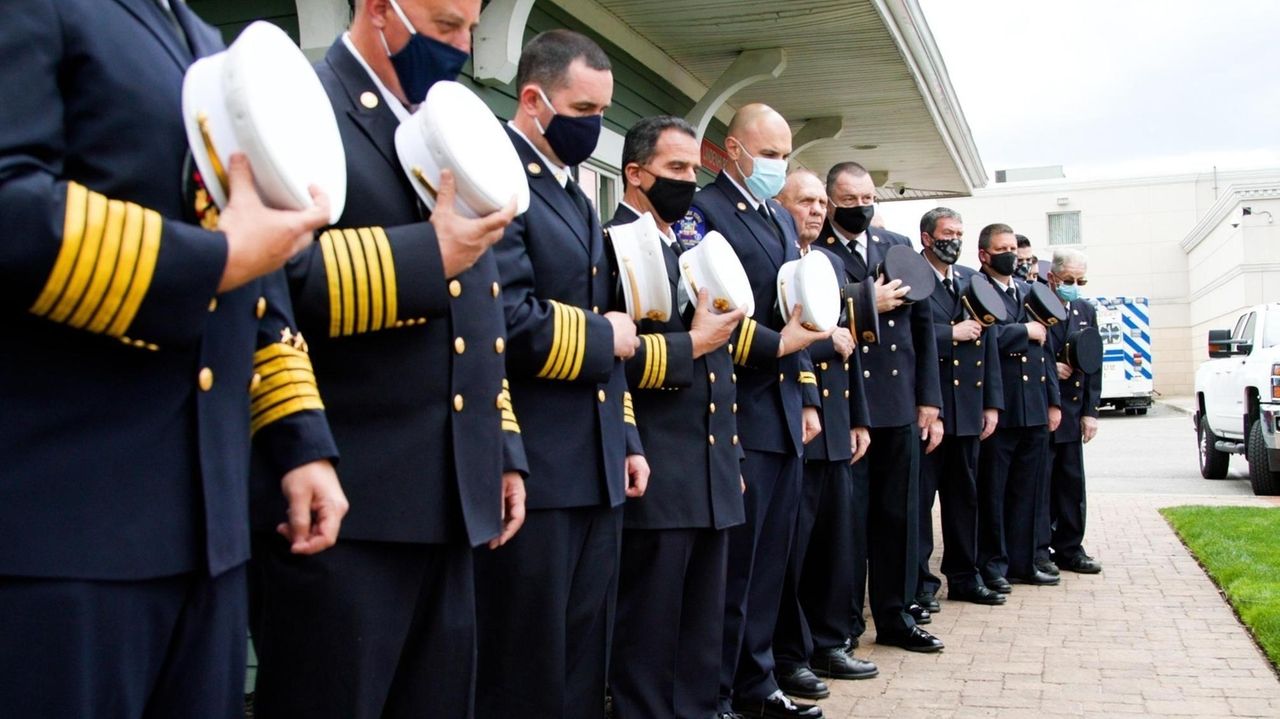 The Village of Lindenhurst on Sunday held a day of remembrance to commemorate the 1-year anniversary of the first COVID-19 case in the village and also to thank the Lindenhurst fire departments for their continued support. Credit: Kendall Rodriguez

Of the 243,171 COVID-19 tests results reported to the state Saturday, 5,704 were positive for a daily positivity rate of 2.35%, according to a statement from the governor.

That rate, which had been stuck around 4% for months, finally dropped a bit last week.

Vaccinations are increasing, the statement said, with more than 40% of New Yorkers receiving at least one dose of vaccine as of Sunday morning.

More than 8.2 million New Yorkers have received at least one dose and over 5.5 million have been fully vaccinated against COVID-19. Close to 1 million shots have been administered on Long Island, as well as over 639,000 completed vaccine series.

"New York is making tremendous progress in our goal to vaccinate every New Yorker while keeping the infection and hospitalization rates down, but variants of the virus remain a concern across the state," Cuomo said in a statement.

An additional 35 New Yorkers died due to COVID-19, the state reported Sunday, bringing the grim total since the pandemic started to 41,485. Three of those deaths were in Suffolk County.

The one-shot Johnson & Johnson vaccine remained on a pause set last week by the federal government after several people — primarily women between the ages of 18 and 48 — developed unusual blood clots after receiving the vaccine.

Dr. Anthony Fauci, chief medical adviser to President Joe Biden, said Sunday he doubts the pause will become permanent. A decision will be made by Friday after a U.S. Centers for Disease Control and Prevention advisory panel meets.

Fauci said it's possible the vaccine will resume with a warning or restriction.

Starting Monday, bars and restaurants can stay open until midnight. The previous curfew, set as part of COVID-19 restrictions, was 11 p.m.

Cuomo told reporters last week if the number of COVID-19 cases steadily decreases that curfew could be extended again. The restrictions were put in place last year to help stop the spread of COVID-19.

In February, the existing 10 p.m. closing times for bars and restaurants was extended to 11 p.m. Owners of these establishments have said extending their hours of operation is vital to helping keep struggling businesses afloat.

Sunday, the Village of Lindenhurst held a somber Day of Remembrance service in the Village Square to commemorate the one-year anniversary of the first local-confirmed case of COVID-19.

There were several prayers given by local religious leaders and songs as well as recognition for the volunteer firefighters who helped the community throughout the pandemic.

Mayor Mike Lavorata also credited residents for looking after each other as well as vulnerable neighbors.

"As a community we have persevered," he said. "As individuals, we have all had to figure out the new normal."

Lavorata also pointed to another sign of hope — in a year when so many businesses closed, 10 new businesses have opened up in the village.

But he cautioned that everyone still needs to wear face coverings and practice social distancing because the pandemic is not over.

"Especially as the weather warms, we could be tempted to forget about COVID precautions," he said. "We cannot."

Clarification: This story has been updated to reflect that, as of Sunday morning, close to 1 million vaccine doses have been administered on Long Island, as well as over 639,000 completed vaccine series.

Should kids get a shot? Long Island parents differ on COVID-19 vaccine Long Island public health experts said they expect young children to eventually become eligible for vaccines, and that herd immunity cannot be achieved without inoculating some of them. How to get a COVID-19 vaccine appointmentWith limited supplies and constantly changing conditions, it can be difficult for Long Islanders to make an appointment for a vaccine. The resources here might help.  See latest news on the coronavirus, vaccinesStay up to date with the latest on the pandemic.