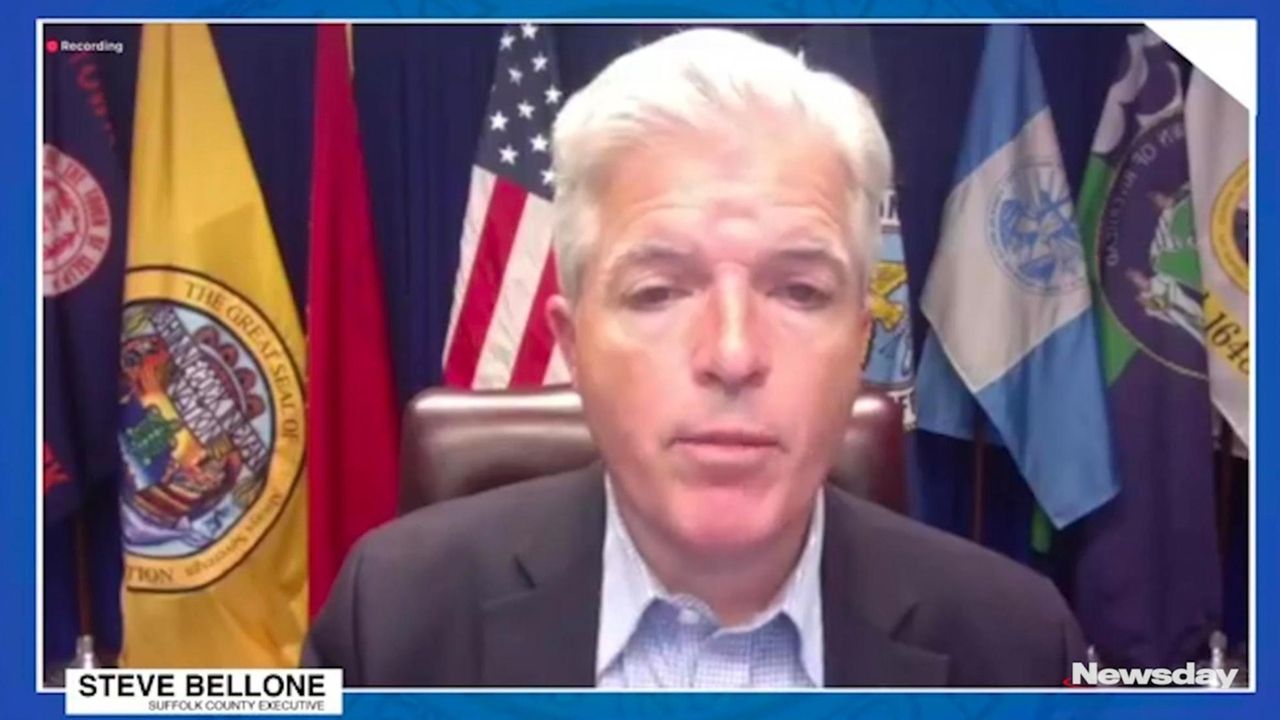 The clusters meant more than 200 people were under isolation or quarantine. The first cluster is related to an early voting site at the Stony Brook Southampton campus in Southampton, Bellone said.

Officials confirmed 10 positive cases connected to the Southampton campus, six of whom were working at the polling site. There are also 48 contacts associated with the polling site who are under quarantine.

In Shoreham-Wading River, three positive cases emerged after a gathering of 32 people. As a result, 161 people had been placed under isolation or quarantine.

Eleven staff members and 140 high school students are under quarantine, plus a number of household contacts, Bellone said. The school had said it will hold virtual classes until Nov. 11.

"It’s another example of an instance where you’re complying with the gathering guidelines, but if the proper precautions aren’t taken — and to a certain extent even if precautions are taken — you can end up in a situation like this," Bellone said. "And that’s why it’s so important we remain vigilant."

He added that "we’ve seen a steady uptick in our numbers."

Stony Brook spokeswoman Lauren Sheprow said the university is cooperating as needed with Suffolk County in response to the cases at the campus polling site. University officials were not aware of any students or staff affected, she said.

The county’s level of new positives has been above 1% since Oct. 21 and averaged 1.5% for the last week, Bellone said. The number of hospitalizations is averaging 40 patients a day, after having declined to the 20s. The current level is 42, with four people in ICU, according to the county.

"These numbers are a concern and we remain focused on that: focused on keeping people healthy, keeping these numbers down and enabling our economic recovery," Bellone said. "We cannot afford to slide back."

The positivity level for COVID-19 in results from Tuesday was 2.69% in "hot spots" around the state, 1.42% statewide excluding the hot spots, and 1.59% including those areas with higher rates of positivity, Gov. Andrew M. Cuomo announced Wednesday.

Fourteen people died of coronavirus-related causes on Tuesday, and 1,253 were hospitalized across the state, an increase of 26 from the previous day.

Cuomo specifically addressed a higher positivity rate of 3.4% in the upstate region of western New York, which includes the cities of Buffalo and Niagara Falls.

"The surge in cases around the country and the globe is a stark reminder that this pandemic is far from over, and while we are doing a good job keeping our positivity rate comparatively low, the numbers in western New York are a caution flag," Cuomo said.

He said the state is "staying on top of this situation by continuing our aggressive micro-cluster strategy," or focus in areas with higher positivity, "expanding testing capacity and enforcing compliance of the public health law."

Long Island's positivity rate was 1.1% and it was 1.3% in New York City from Tuesday test results. The number of new confirmed cases was 100 in Nassau County, 74 in Suffolk and 795 in New York City.

Long Island public and private schools had, as of Tuesday, reported 1,092 coronavirus positives since Sept. 8, up 20 cases from the previous day, according to the state’s COVID-19 Report Card. Of those, 817 were students and 275 were teachers and staff. The statewide tally was 3,606 students and 1,854 teachers and staff members for 5,460 who tested positive.

The recent climb in positivity levels in New York has come as the United States accumulated nearly 9.5 million confirmed cases of COVID-19 since the pandemic’s start — the most of any country, according to Johns Hopkins University. The United States leads the world in deaths, with 233,356 as of late Wednesday afternoon.

1:56
De Blasio: After opt-in about 40% of students to be in schools
State figures: NY nursing home staff lagging in COVID-19 vaccinations
2:27
Pandemic opened courts to virtual operations, but challenges persist
2:49
Projected fatal drug overdoses increased on LI during the pandemic, statistics show
NY health officials: Students can be 3 feet apart in classrooms
1:54
Online instruction has been liberating, and vexing, for students with disabilities
Didn’t find what you were looking for?