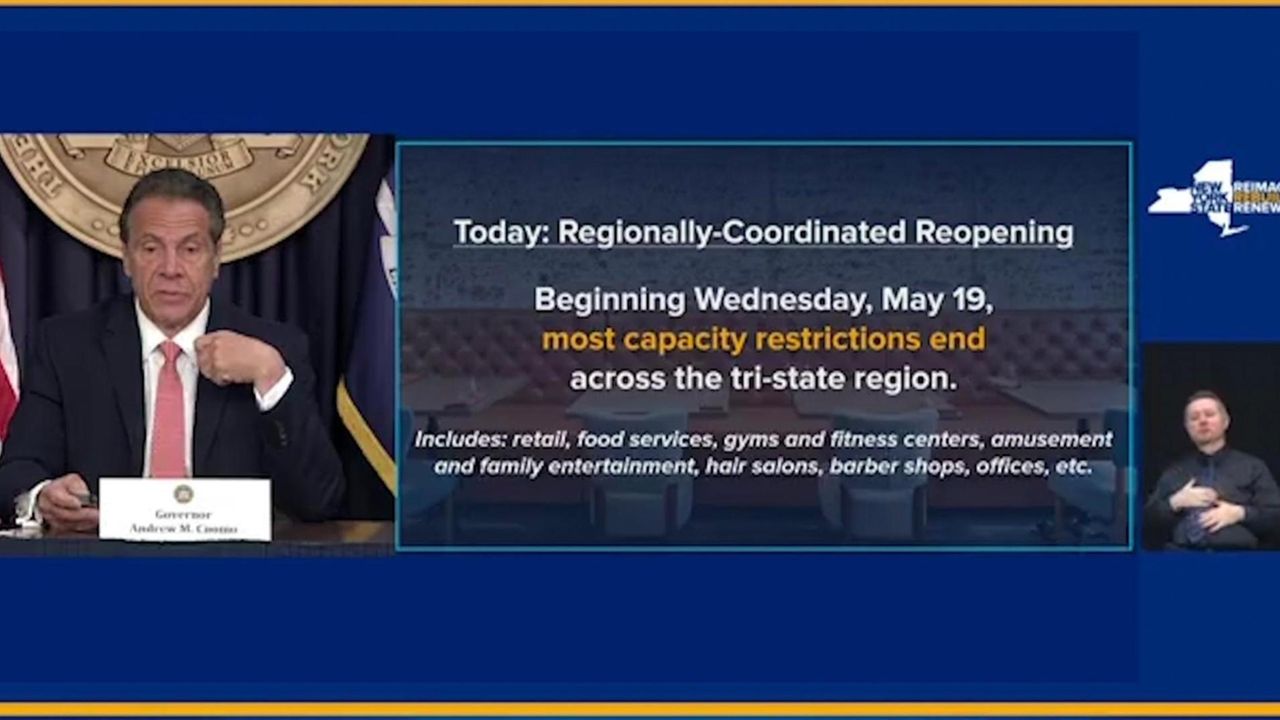 New York will be mostly back in business on May 19.

Gov. Andrew M. Cuomo announced Monday the state is removing most capacity restrictions for businesses and institutions and easing limits on large gatherings in what he called "a major step forward in reopening" the state from coronavirus shutdowns.

The move could mean a more robust return of New Yorkers to restaurants, museums, theaters, Broadway, retail, shops and offices, though some business operations may experience delays in returning to normal, Cuomo said.

"This is a major reopening of economic and social activity … and it is coordinated regionally, which is smart" to avoid people crossing state lines to participate in limited activities, Cuomo said during a livestreamed briefing.

But New York will maintain a six-foot social distancing requirement, meaning capacity should be limited by the ability to implement that rule, he said. That could delay the return of activities such as Broadway plays.

The reopening, coordinated with New Jersey and Connecticut, will include fully operational mass transit and the lifting of curfews for food and beverage establishments, starting May 17, Cuomo said. Expanded limits on crowd gatherings might make events such as high school graduations or proms more feasible.

New York gets back to business

Business owners and some politicians praised the moves, but some medical experts were worried and stressed that social distancing and other safety measures remain necessary.

"I understand all the reasons, which includes mental health, fiscal health and the overall economy," said Dr. Leonard Krilov, chairman of pediatrics and chief of pediatric infectious disease at NYU Langone Hospital-Long Island in Mineola. "We also don't want to spike the ball at the five-yard line, before we get into the end zone. We need to follow all the basics, which include not going out when you're sick."

Adelphi University's Dr. K.C. Rondello, a public health epidemiologist, said he was "a bit surprised that the restrictions are being lifted so rapidly."

While it is good news on one hand, "I worry what the response will be if we see some significant deterioration in our progress and need to resume some of these protections again," Rondello said.

Cuomo ordered widespread limits on business activities and social gatherings in the spring of 2020 to curtail spread of a runaway virus, but positivity levels and case numbers have fallen recently as vaccinations increased.

"The retail industry for months has recognized that the only way to achieve a full economic recovery is to get the virus under control. And today’s announcement is another important step toward that goal," council president Melissa O’Connor said.

She said "the health and safety of employees and consumers will be the top priority" as those businesses move forward.

Some businesses have already brought back employees to their offices.

John V. Terrana, comanaging partner at Forchelli Deegan Terrana Law in Uniondale said the firm and its 120 employees made a return to the office only last week.

Lifting capacity restrictions won’t pose much of a change at restaurants, since tables must continue to remain six-feet apart, some owners said.

"It’s going to have zero effect on us, because we’re not expanding our building," said Dean Cirella, owner of Cirella’s in Melville. The restaurant's pre-COVID indoor capacity was 120 seats, but will stay at half-capacity because distancing rules mean there is no room for additional seats.

"We can add more outside dining, which is great, but everything goes back to social distancing. Our capacity [inside] is going to stay where it is. We’re still being safe and don’t want to get anybody sick."

At theaters, though, the number of people in a given auditorium could vary widely.

At PJ Cinemas in Port Jefferson, which operated briefly during the pandemic, the policy was to limit one row to one party, and to alternate rows.

"So let’s say we have 25 rows and we’re doing every other row. If you have only people that come in pairs, that’s 50 people," said owner Phil Solomon. "But if they come in groups of four, that could be 100 people. And they’d still be socially distanced."

Cuomo’s reopening announcement comes after movie studios have postponed many of their big releases, leaving theaters with little to lure back moviegoers. Disney’s "Cruella" is slated for release May 28 but the first true summer blockbuster, Marvel’s "Black Widow," won’t be out until July 9.

"I’m probably better off delaying our opening as much as possible," Solomon said. "There just isn’t any product to show."

Studio Theatre of Long Island’s BayWay Arts Center in East Islip is slated to reopen May 14 with the Biblical musical, "Children of Eden." The new capacity ruling is unlikely to make much of an impact on ticket sales, said executive director Christopher Rosselli.

"I don’t see it changing the numbers that significantly," he said, since the theater seats in every other row and skips two seats between groups. "Now if that six-feet number became three feet, that would be help."

Cuomo said a midnight curfew on food and beverage bars and restaurants will be lifted on May 17 for outdoor service and on May 31 for indoor service.

State Budget Director Robert Mujica noted that businesses such as restaurants can get around the six-foot requirement, which comes from CDC guidance, by installing plexiglass barriers or something similar between tables.

The limit of 25 people on outdoor residential gatherings will be eliminated on May 19, reverting to 500 people with appropriate social distancing, while the limit indoors will go from 10 to 50, the state said.

Cuomo also said that outdoor large stadiums will move to 33% capacity in the state on May 19, while the tristate area governments work on a joint protocol for those venues going forward. That may include expanding capacity if attendees prove they are fully vaccinated or were negative in a recent COVID-19 test.

Curran: 'Now is the time'

Suffolk County Executive Steve Bellone said he was "encouraged" by the actions but they did not "go far enough for businesses like the Long Island Ducks who have had safe reopening plans, approved by the local health department, in place for months. With capacity restrictions being lifted on most indoor businesses, we must find a way to allow outdoor venues that have been devastated by this pandemic to survive."

Long Island's seven-day average of positivity tracked at 1.79%, with New York City registering 1.72%. The number of new confirmed cases in test results Sunday was 130 in Nassau County, 172 in Suffolk and 916 in New York City.

"I'm cautiously optimistic we can open safely, especially if people continue to get vaccinated." Golbin said, adding that COVID-19 hospitalizations have continued to slide as more people agree to be vaccinated.

New York City’s subway system will return to round-the-clock service later this month — a year after being closed during overnight hours for intensified disinfecting efforts.

Cuomo announced the resumption of 24/7 subway service on May 17 to coincide with the lifting of curfews for bars and restaurants in New York City later this month.

In New York City, about 80,000 municipal workers were returning to their physical workspaces beginning Monday for the first time since shutdowns and work-from-home policies began nearly 14 months ago.

About 80% of the city's more than 300,000 workers — including cops and firefighters — have been working in person through the pandemic.

"When we’re all together, we get more done for the people," Mayor Bill de Blasio said Monday at his daily pandemic news conference.

He also highlighted how health metrics tracking the pandemic — such as infection and hospitalization rates — keep going down.

"Talk about exciting — today’s indicators! This is my kind of report, and its been such a good pattern lately," he said, before showing a slideshow detailing the metrics, such as the infection rate, which is 2.78% of those tested, averaged over the prior seven days.

"A great number. This is my all-time favorite graph. Just want to see that go lower, lower, lower all the time," he said.

He urged New Yorkers to get vaccinated to keep moving toward his goal of a full reopening of the city — without restrictions — beginning July 1.

FDA expected to OK Pfizer vaccine for teens within weekThe announcement is set to come barely a month after the company found that its shot, which is already authorized for those age 16 and older, also provided protection for the younger group. Fewer NY COVID-19 infections boost hopes for wider reopening"We are here to say open it up 24/7," Sen. Chuck Schumer says of the subway system as the latest state data has the daily positivity rate of new cases at 1.49%.  See the percentage of LIers who are fully vaccinatedCheck the latest numbers on how coronavirus has spread in your community. How to get a COVID-19 vaccine appointmentWith limited supplies and constantly changing conditions, it can be difficult for Long Islanders to make an appointment for a vaccine. The resources here might help.