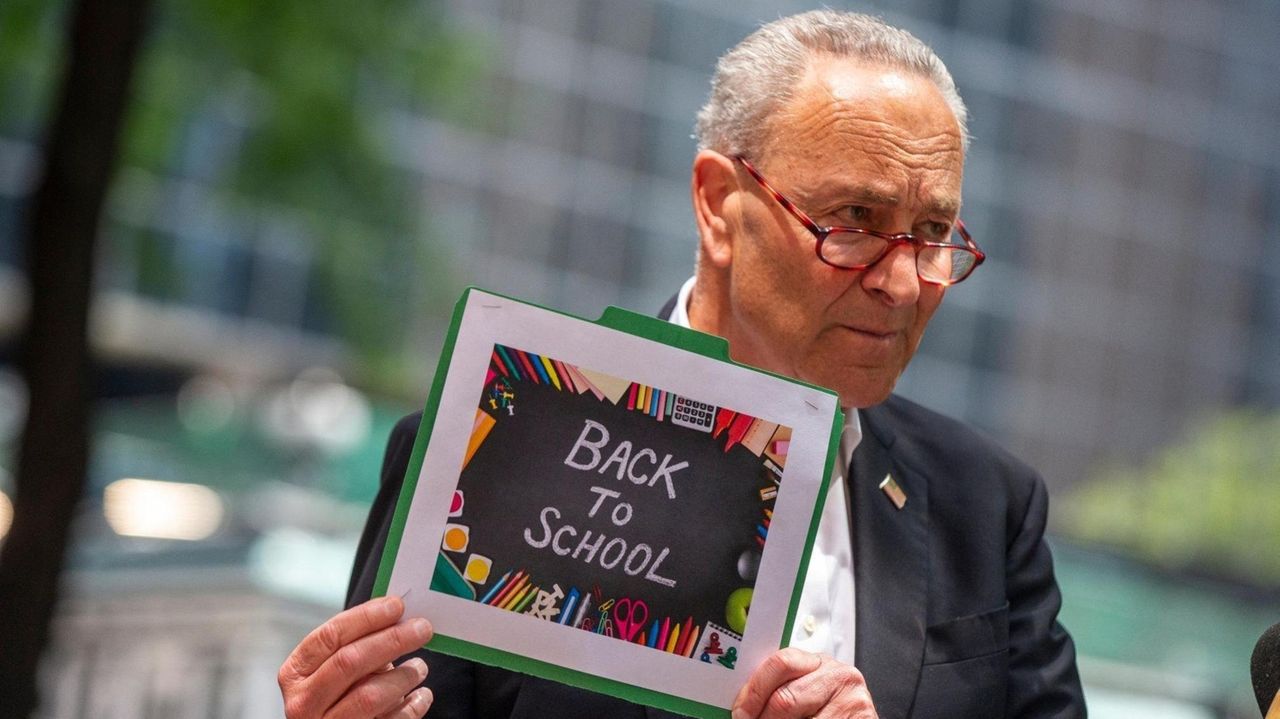 Sen. Chuck Schumer (D-N.Y.) held a news conference in Manhattan on Sunday to talk about COVID-19-related legislation he is co-sponsoring that would send federal funds to school districts so they can make the necessary changes and upgrades to reopen safely in the fall. Credit: Howard Schnapp

"What's happening elsewhere in the United States is very concerning to us here at home, and our ability to avoid the same fate rests on New Yorkers' willingness to wear masks, socially distance and wash their hands, and local governments' willingness to enforce state guidelines," Cuomo said in a statement.

While it's still unclear whether schools will reopen in the fall, U.S. Sen. Chuck Schumer said Sunday he is pushing legislation that would provide "billions" of federal dollars for protective gear, physical barriers and other resources to help schools remain safe during the pandemic.

The money would come as part of a $175 billion plan for K-12 schools nationwide that would also address “learning loss, implement public health protocols, and provide quality education to all students” in both public and private schools, according to a news release from Schumer's office.

“Long Island will get billions, and New York City will get tens of billions,” Schumer said, speaking on Third Avenue at a news conference outside his Manhattan office as he held a sign that read "Back to School."

Angelo Roefaro, a spokesman for Schumer, said the exact dollar figures would be determined during negotiations and would factor in student population.

Schumer's announcement came on the same day Education Secretary Betsy Devos appeared on CNN's "State of the Union" and said guidelines from the Centers for Disease Control and Prevention on the safest way to open schools don't necessarily apply to every district in the country.

"The CDC guidelines are just that, meant to be flexible and meant to be applied as appropriate for the situation," DeVos told host Dana Bash, adding that local school district officials can best determine what course to take.

When asked specifically what the federal government's plan is for fall school reopenings, Devos did not answer directly but expressed confidence that school administrators across the country will open their campuses with the proper precautions.

"Testing yesterday detected 40 new positive cases out of a possible 5,168 tests, which is less than one percent out of all tests performed," Curran said in a statement. "As cases continue to spike around the country, our goal is to keep positive cases as close to around one percent as possible.

Also Sunday, Cuomo said health officials are monitoring an uptick in Rensselaer County, in the capital region, which had 23 new cases Saturday for a total of 616. Officials believe the uptick is linked to individuals who traveled to Georgia and tested positive once they returned to New York. Those individuals are in isolation and officials are using contact tracing, Cuomo said.

“Today's numbers remain low and stable, but it is up to us to keep it that way,” Cuomo said. “Being New York Tough isn't easy, but New Yorkers have shown the nation that we can effectively fight the virus when we all come together, and I urge them not to give up any ground now."