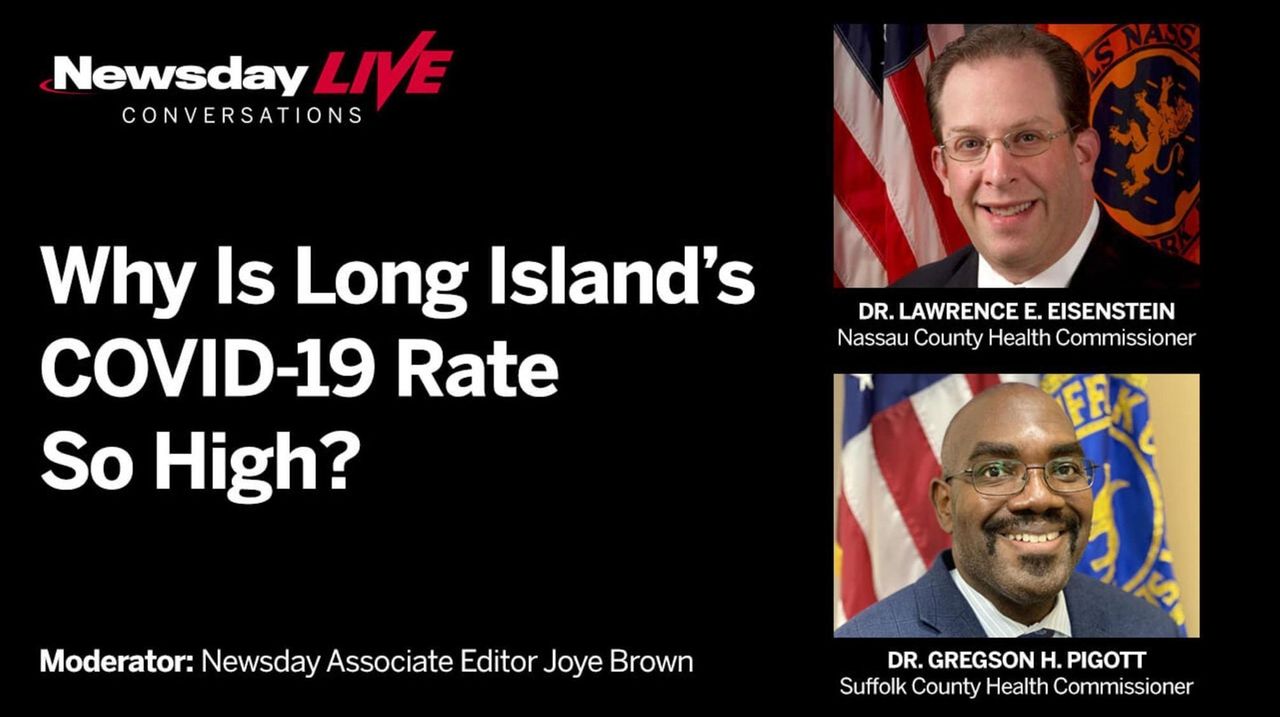 Nassau and Suffolk health commissioners discuss why Long Island is still trending higher in positive COVID-19 cases than the rest of New York, what that means for a potential fourth wave, and more.

Even as more people get vaccinated, COVID-19 continues to infect people on Long Island as people begin to socialize more, county health commissioners said during a Newsday Live online talk.

"The most common scenario is the household spread," said Suffolk County Health Commissioner Gregson Pigott during the webinar "Why is Long Island's COVID-19 Rate So High?" moderated by Newsday columnist Joye Brown. Pigott said February's winter weather slowed the spread but since March "there’s been much more social activity."

Young people are "apt to hang out together and not socially distance, not use face coverings, and then you bring it [COVID-19] home and then mom and dad get it," Pigott said. "God forbid if their grandparents are in the home."

New York State data shows that on April 15 the positive test rate for all counties was 2.8% while it was 3.1% in Nassau and 3.4% in Suffolk. Positivity rates across all counties have fallen from 7.4% on Jan. 1, according to state data.

Nassau County Health Commissioner Lawrence Eisenstein said COVID-19 variants did not appear to be driving up infection rates, at least among those vaccinated.

"Even though the rates have been high, hospitalizations have been low," Eisenstein said. There are now very few people over 65 — a population group who had early access to the vaccines — who are being hospitalized. "What that's telling us is that we really vaccinated that population at a very high rate and that most of them are being protected by the vaccines."

About 47% of Nassau County and 39% of Suffolk County residents have received at least the first vaccine shot, according to state figures Friday.

The county commissioners said vaccine hesitancy — people refusing to be vaccinated — has not become a problem so far.

"At this point it's still a lot of demand outstripping supply," Pigott said. Though it is now easier and quicker to find an appointment to get vaccinated than it was at the beginning of the rollout, more people are seeking the vaccine than there are shots available, he said.

Eisenstein said that Nassau County is vaccinating at a rate of 10,000 shots a day.

"We could really have everybody who wants to be vaccinated, and is eligible of course, vaccinated before Memorial Day," Eisenstein said.

Pigott said he thought the Johnson & Johnson vaccine would eventually get the green light to be used again. It has advantages over the Pfizer and Moderna vaccines because it only requires one shot and is easier to store and handle, he said.

"That's a very important vaccine for us for the homebound population because it's difficult enough to go into someone's home once, let alone twice to give a second shot," Pigott said.