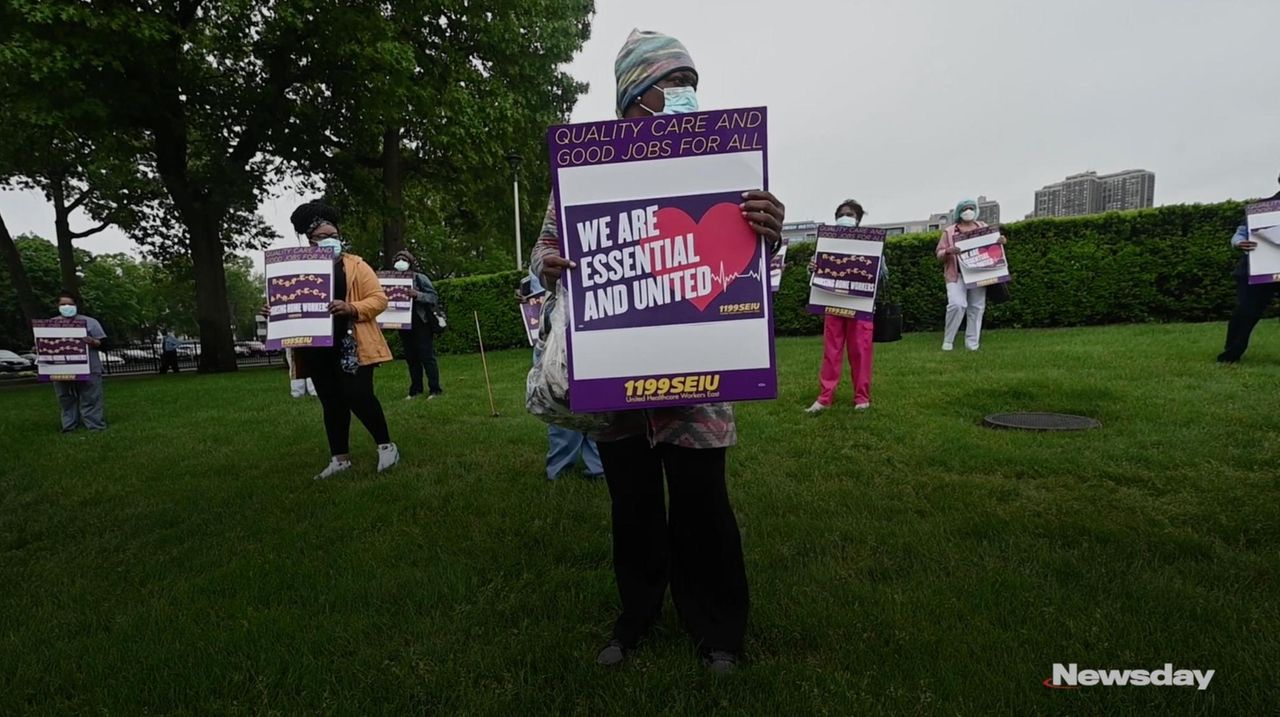 Certified nursing assistants at the nursing home that reported New York’s highest COVID-19 death toll remember how a feisty patient became lifeless after she was moved to a makeshift ward in an auditorium.

They say the nursing home failed to provide adequate protective equipment and recall workers transporting bodies to a morgue with little assistance or training.

One says she wept in the locker room for residents who had died, many she had known for years, before she herself contracted COVID-19.

“We built a relationship with residents that we lost,” said Marcia Lumley-Gayle, 57, of Elmont, who has worked for 22 years at Parker Jewish Institute for Health Care and Rehabilitation in New Hyde Park.

She added: “We spend more quality time with our residents than we do with our family.”

On the front lines of the pandemic, certified nursing assistants feed, turn and wash nursing home patients for an average salary at Parker Jewish of $41,000 a year, according to their union. In interviews with Newsday, Lumley-Gayle and two colleagues offered a view of the sorrows and resentments they suffered inside a 527-bed facility on the Nassau-Queens border that has reported 82 coronavirus deaths.

The certified nursing assistants say that when the facility equipped nurses with N95 masks, they left CNAs unprotected amid shortages of PPE; that security guards searched their bags, looking for stolen wipes or hand sanitizer; and that residents and staff alike contracted the virus, forcing remaining workers into struggling to provide care at the height of infections in April.

“When you go in the night, you see the trays at the bedside. Nobody took the time to feed these residents,” recalled 10-year Parker Jewish CNA Sandra Hutchinson, 57, of Rosedale, Queens, adding, “You don't have the time to even comfort these residents. When you see them, they're just lying there, lifeless, you know, no life in their body."

And when the CNAs said they spoke to their supervisors, their bosses just said: "Go to the unit, go to the unit."

Parker Jewish challenged many of the depictions voiced by the three CNAs. Referring to accounts by Lumley-Gayle, Sutherland and Hutchinson, vice president of corporate outreach and development Lina Scacco wrote in an emailed response to questions:

“I know that they are not representative of how our hardworking CNAs feel about Parker and the critical job they are performing during this crisis.”

She said the New Hyde Park facility’s death total was driven by factors including its comparatively high number of beds and a high number of Alzheimer and hospice patients, as well as early testing of residents for COVID-19, while many other facilities didn’t test. The nursing home listed COVID-19 as the cause of death even when other health factors played a role, Scacco said.

“At no time has Parker been ‘short-staffed’,” she wrote, also stating, “During the height of the pandemic, our CNA staffing fluctuated somewhat, but we supplemented with other qualified staff such as rehab aides and therapists.”

The New York State Department of Health said an unannounced inspection conducted at Parker Jewish on May 11 found no deficiencies. The agency also said that in late May the nursing home reported having supplies of protective equipment.

Earlier that month, the CNAs said their workload eased for a sad reason.

“There's so many people that passed away, there are a lot of empty beds,” Lumley-Gayle said.

Her reflections, as well as Hutchinson’s, are shaped by the coronavirus’ toll on a personal level: They both fell ill and believe they contracted COVID-19 while exposed to the virus without the benefit of adequate personal protective equipment.

Hutchinson said she suffered a fever that hit 105.1 and called in sick, only to be told by a supervisor that she needed to show up the next day with a doctor’s note. She said she brought the documentation, tested positive and recuperated at home from April 7 to April 20.

She expressed anger that management seemed to suggest she was shirking her duties.

“This is a pandemic,” Hutchinson said. “This is not something that we all decide that we're going to call out [sick] because we don't want to go in.”

Lumley-Gayle said she fell ill and was out sick from April 12 until June 12. She never had a positive COVID-19 test, but said chest X-rays showed pneumonia, which medical staff told her was related to COVID-19. She worried both about her health and that of her family and feels the nursing home left them exposed with inadequate protective equipment.

“We have to go home to our families, we have to secure ourselves,” Lumley-Gayle said, adding, “I feel like we were thrown in the lion's den without warning. And we had to fight our way out of it.”

Scacco acknowledged that nurses received N95 masks before other staff, writing they “perform aerosol generating procedures, such as suctioning and nebulizer treatments” that could be prone to spreading the virus.

Parker Jewish provided masks to additional staff as they became available, Scacco wrote to Newsday, adding that the nursing home “spared no expense to secure Personal Protection Equipment [PPE] … often at grossly inflated prices, and we continue to regularly secure and issue all necessary PPE.”

She added that management received no complaints about PPE from either staff or their union, SEIU 1199, an assertion disputed by the CNAs and the union.

“Words cannot describe our anguish and outrage about the Parker Jewish Institute residents who lost their lives and the caregivers who continue to make incredible personal sacrifices to protect the lives of others,” union president George Gresham wrote in a statement.

Workers, he wrote, were “being thrown into the front lines unarmed and unprepared to keep themselves safe.”

As COVID-19 exacted fatalities, the CNAs faced the toll daily.

“And they're the ones who used to ask you, ‘How old is your little boy? How old is your son now?’ We have a rapport with our residents. And these are the residents that are gone.”

Parker Jewish pressed the CNAs into service moving bodies to a morgue. They say they were not trained how to handle the additional dead.

“The CNAs are the workers who have to take them down. Did they hire anyone to take care of that? No. We were told by security, there's a fridge outside,” Sutherland said. “They never told us how to prepare ourselves.”

Scacco said there was training on escorting bodies to the morgue, but acknowledged complaints about procedures.

“Staff did bring a concern to our attention concerning the escorting of patient remains to our secondary morgue,” she wrote. The complaint, about taking bodies to the secondary morgue over uneven ground, “resulted in a practice change because we agreed with the concern.”

Sutherland said a part of one floor at Parker Jewish was cleared of patients and sat largely empty after it was leased to Long Island Jewish Medical Center, which is across the street from Parker Jewish. Scacco confirmed that half a floor had been leased to LIJ to help the hospital meet a state order to expand hospital capacity, when the state was seeing a surge in patients.

Nursing home patients were taken to the auditorium, where no bathroom was easily accessible, Sutherland and Hutchinson said, leading to a loss of dignity for some patients. The condition of others appeared to worsen, Hutchinson said. She cited a dementia unit patient who used foul language when she became aggravated before the pandemic but lapsed into lifelessness in the auditorium.

“She was just lying there. The life, gone out of her eyes, she just lied there,” Hutchinson recalled.

Scacco wrote that the auditorium was used temporarily to separate COVID-19 positive and negative patients, and there was access to bathrooms.

“I go into work with my pride and my dignity to take care of my patients to the best of my ability. They are the ones that matter,” she said. “These residents are the ones why we have a job. They're family to us after a time.”

Lumley-Gayle said the CNAs were looking only for proper treatment.

“I love my job, and it's my piece of employment and you want it to be safe and want also to be respected,” she said.