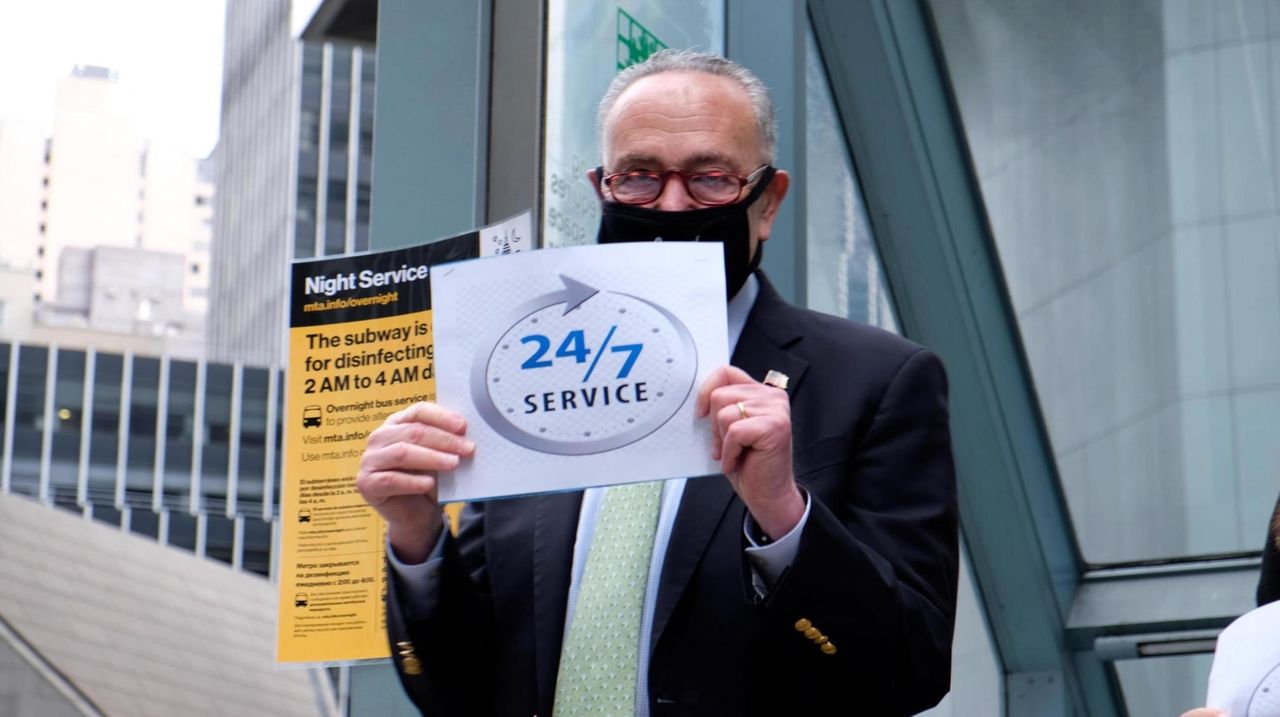 The rate of COVID-19 infections across New York State remained low, according to the latest data announced Sunday by Gov. Andrew M. Cuomo, paving the way for more reopening of the economy.

While New York City restaurants geared up to expand capacity to 75% on May 7, pressure mounted for the Metropolitan Transportation Authority to reinstate 24-hour service on the subway.

"We are here to say open it up 24/7," Senate Majority Leader Chuck Schumer said Sunday during a news conference in midtown Manhattan. "New York is a 24/7 city and our subway should be a 24/7 subway."

Schumer (D-N.Y.) said increasing ridership, decreasing COVID-19 cases, and the widespread distribution of vaccines in the city justify the move.

Cuomo, who has authority over the MTA, shut down overnight service last year amid the pandemic — the first time in the system's history — in order to sanitize subway cars. The trains continued to run, even during the closure, without making stops.

On Thursday, Mayor Bill de Blasio said he wanted the subways, and the rest of the city, to open at "full strength" by July 1. Cuomo, who will make the final call, said afterward that he also wanted the city to "open up" July 1, and said such decisions will be guided by health metrics.

"It’s statewide management system and we are managing it by the science, by the data, you look at the number and you will see the rate of opening," the governor said Thursday. "I would hope, I am reluctant to make projections because I think they’re irresponsible."

In response, the MTA pointed to comments made by chairman and CEO Pat Foye on 1010 WINS last week saying they are "looking to bring 24/7 service back as quickly as we can."

Foye said ridership in the 2 a.m. to 4 a.m. period is "modest" but is expected to increase as restaurants have longer hours and more workers return to offices.

"We're very focused on that and looking forward to bringing that that service back," he said.

According to new figures released by the state Sunday, the daily positivity rate of new COVID-19 cases was 1.49%, based on 191,257 test results reported Saturday.

Of the 2,849 new cases reported to the state, 125 were in Nassau and 190 were in Suffolk. The state recorded 33 additional deaths attributed to COVID-19, adding to a total of 42,051 since the pandemic started.

"Every single day, New York State is moving forward in the footrace between the infection rate and the vaccination rate," Cuomo said in a statement Sunday. "More New Yorkers are getting vaccinated and hospitalizations are declining, which is good news, but we need New Yorkers to stay vigilant to make sure we don't lose any of the progress we've made."

More than 9.2 million people had received at least one dose of the COVID-19 vaccine in New York as of Sunday morning, and more than 6.9 million had completed their 2-doses, according to the state.

In an effort to get more people vaccinated, officials are allowing walk-in appointments at some sites and creating smaller pop-up locations in communities.

Since Thursday, all state mass vaccination sites — including Jones Beach, Stony Brook University and Suffolk County Community College in Brentwood — have allowed walk-in appointments for those receiving their first dose of the vaccine.

"I’m proud of the progress we’ve made in getting 7 in 10 adults vaccinated, and Nassau residents deserve a great deal of the credit for choosing to roll up their sleeves," Curran said in a statement. "Our vaccination rate in Nassau County is one of the highest in New York State, but we must keep up our momentum during May."

See the percentage of LIers who are fully vaccinatedCheck the latest numbers on how coronavirus has spread in your community. Editorial: The vaccine? It's our best shotMany shots are going into arms across Long Island, but some neighborhoods are rolling up their sleeves more than others. I got my COVID-19 vaccine — what can and can't I do?There are some clear guidelines from the CDC and other authorities on what you can and can't do now, but other decisions depend on your comfort level. Here's a guide for what to know. Sign up for COVID-19 text alerts

How the COVID-19 pandemic changed Long Island's towns
2:18
Snowstorm closures used to scare him. No more.
NY now one of 18 states with half of adults fully vaccinated against COVID-19
1:25
Doctors disagree on whether Cuomo's decision to lift restrictions is wise
Some aren't ready to give up masks despite new CDC guidance
COVID grants for restaurants nearly gone: SBA
Didn’t find what you were looking for?