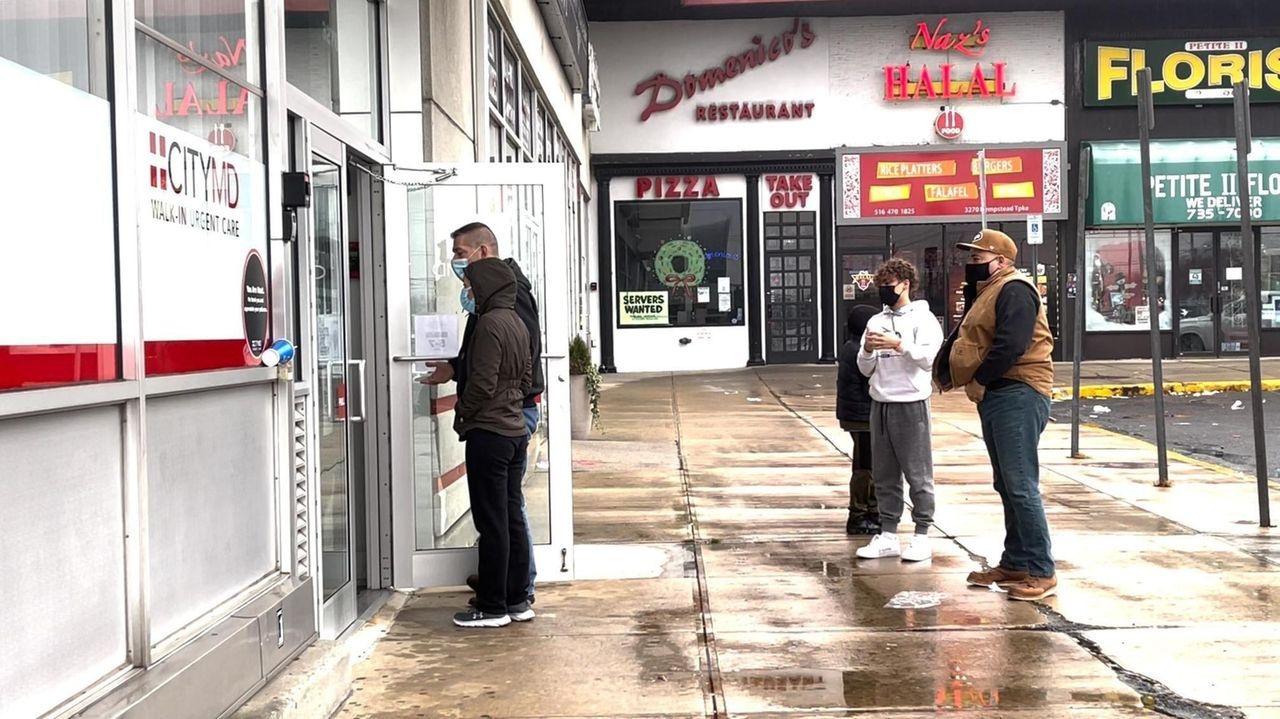 Frustrations continued for Long Islanders on Saturday, Christmas Day, as many who attempted to get a COVID-19 test were turned away by health care facilities that were out of supplies. Credit: Howard Schnapp

While many Long Islanders were opening presents Christmas morning, others were visiting and calling urgent care centers to get a COVID-19 test — only to find out none were available.

"We’re only taking 22 people today," said Adeline Jean, a medical assistant at the ProHEALTH urgent care center in Amityville, after taking down the names and numbers of several people gathered near the doors at 8:45 a.m., shortly before the center opened.

Minutes later, Chris Gudel, 43, of West Babylon, arrived only to be told by Jean that no more appointments were available. It was the third urgent care center Gudel had been turned away from Saturday morning.

"I’m just going to keep going" to other centers, he said, and, if he didn’t have luck, he was planning to try again on Sunday.

Long Islanders have been standing in long testing lines for days as the number of COVID-19 cases surges amid the spread of the highly transmissible omicron variant.

New York State on Thursday set another record for the most COVID-19 cases in a day, 44,431, although early in the pandemic caseloads were greatly undercounted because of the scarcity of tests. There were a record 359,191 test results on Thursday.

'At capacity for today'

At the CityMD in Levittown, a steady stream of people approached the door only to be told by an employee, "We’re at capacity for today." The employee, who declined to be identified, suggested returning Sunday, but, she added, "People start lining up at 5 a.m."

John and Misledy Savold, of Boston, were desperately trying to get tests required for their Monday flight to Colombia.

"I hope we get the test in time to get on the plane," said John Savold, 60, who was in his native Levittown visiting family.

Savold said he called to make sure the urgent care center was open on Christmas but didn't realize it would be so difficult to get tested.

Dr. Bruce Polsky, an infectious-disease specialist who is chairman of medicine at NYU Langone Hospital-Long Island in Mineola, said the testing crunch could exacerbate the surge.

"The lack of robust availability of testing can potentially result in increasing spread, because people who test positive would likely be staying home," he said. "It does pose a risk of unwittingly transmitting the virus to someone who might not do well if they get infected, a vulnerable person, by age, immunosuppression or having other conditions that make COVID worse."

Polsky is encouraged that people are following recommendations to get tested before gathering with friends and family to reduce the risk of transmitting the virus.

"It’s discouraging that there are not enough test kits available to meet the demand," he said.

Gudel said he tested positive with an at-home test on Friday. He doesn’t have any COVID-19 symptoms, but his son tested negative despite a 103-degree fever.

After Friday’s positive test, he opted not to go to a large Christmas Eve celebration at his brother’s house, and he canceled a Christmas Day dinner at his home.

Manuel Taveras, 49, and Reina Taveras, 52, of Copiague, snagged two of the last appointments at the Amityville ProHEALTH and were told to wait for a call.

"My daughter got sick with COVID" on Dec. 19, Manuel Taveras said.

Neither Manuel nor Reina Taveras felt sick, but, he said, "We’ve got to check it out to make sure."

They tried three testing sites Friday but couldn’t get appointments.

Jennifer Peña, 33, of Lynbrook, was standing outside the Lynbrook Northwell Health GoHealth Urgent Care with her phone in hand. Peña, who had a fever, body aches and a sore throat, arrived there at 7:45 a.m., 75 minutes before the center opened. There already were 16 people before her on line. It was unclear if she'd be able to get a test, so she was calling other urgent cares. She was told no spots were available.

"I tried yesterday and it was impossible too," Peña said.

Kourtney Wynn, a medical assistant at the Lynbrook center, said there were more than 100 people on a list for tests, but employees weren’t sure if they could test them all, especially with shortened Christmas hours. Patients were told they’d get a call and text notifying them if there was space.

"We also have to take care of [non-COVID-19] emergencies," Wynn said.

At the Lindenhurst CityMD, where Gudel said he had been told there were only 45 tests being given on Christmas, a visibly ill Mariangel León, of Copiague, 17, walked back to the car with her mother, Sonia Sánchez, 43. León said she had been sick for about a week with congestion, a cough and pain in her ears.

"This is deplorable," Sánchez said in Spanish at the difficulty in finding testing.

Sal Kahvaci, 21, of West Babylon, was trying to get tested because his brother, sister-in-law and their two young children were arriving from out of town to spend Christmas with him and his father, and "they have kids and stuff and don’t want to come into a house that might have COVID."

After a security guard at the door told him no more tests were available, a dejected Kahvaci said, "I don’t know what to do. … I’ll probably look for another one."