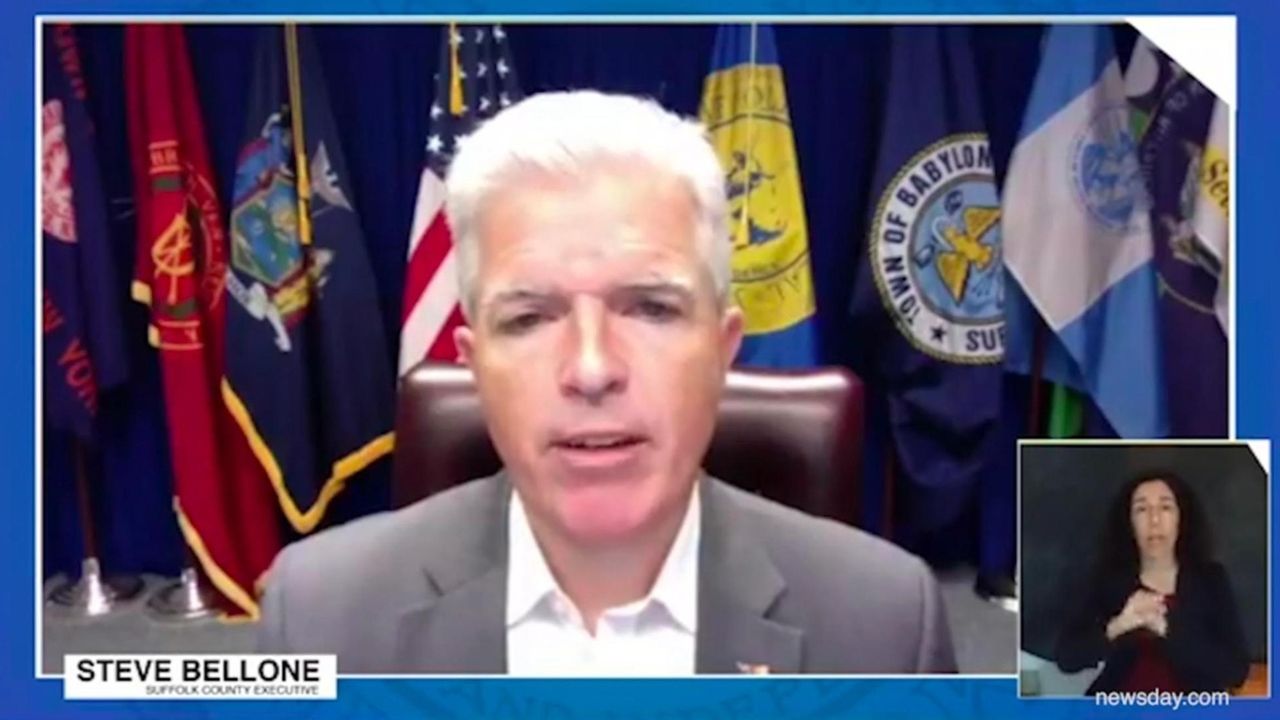 This story was reported by Rachelle Blidner, Robert Brodsky, Joan Gralla, David Reich-Hale and Joie Tyrrell. It was written by Brodsky.

The state hit its highest COVID-19 positive rate since May, narrowly topping last week's mark, as Suffolk County Executive Steve Bellone warned about a crackdown on pre-Thanksgiving gatherings and just as health officials sounded the alarm about a cluster of cases at a Riverhead restaurant.

The statewide positivity rate Monday was 3.18%, the highest level of daily infections since May 25 and slightly higher than the 3.09% reported on Nov. 9, according to the state's latest data.

"The number of cases across the country and in New York are only continuing to climb," said Gov. Andrew M. Cuomo in a statement. "Despite our success in managing the spread, New York is not immune to this national surge of COVID."

In total, 5,088 New Yorkers tested positive for COVID-19 Monday, including 406 in Nassau and 402 in Suffolk, according to the state data. Long Island's positivity rate remained at 3.5%, a recent high after months of decreased levels.

An additional 156 New Yorkers were hospitalized with the virus, bringing the statewide total to 2,124, including 408 in intensive care. There were 29 deaths from the virus Monday, two in Suffolk and one in Nassau.

Bellone warned that officials could crack down on large gatherings the Wednesday before Thanksgiving, considered to be "one of the biggest party nights of the year for young people," using the county’s social host law.

Police will step up patrols the evening of Nov. 25 to respond to reports of gatherings at private homes that exceed the state limit of 10, Bellone said.

If underage drinking or drug use is occurring, homeowners could be charged with social host law violations, with fines of $500 to $1,000, in addition to gathering restriction violations, he said.

The night before Thanksgiving is typically when many college students returning home gather at bars with friends. With new restrictions requiring bars and restaurants close at 10 p.m., Bellone worries that crowds will instead gather in private homes.

"This year is far from normal, and we cannot afford to move forward with normal celebration," Bellone said. "Small gatherings that may seem harmless may lead to a spreader event."

Six employees tested positive and are in quarantine, officials said. Bellone urged anyone who dined at the restaurant on Nov. 5 and 6 to get tested and isolate.

Bellone spokesman Derek Poppe said "it’s not clear" if the employees were infected through work or at other locations.

Tina Fogione, a district manager for Friendly's, said the restaurant takes the temperature of all employees, requires facial coverings from customers and staff and does frequent sanitizations.

Coronavirus-related hospitalizations in Suffolk reached 97 Monday, an increase of 16 from one day prior, while 20 patients are in the ICU, Bellone said. The county hasn’t seen more than 100 hospitalizations since June 18.

Nassau hospitals are reporting 133 COVID-19 hospitalizations, including 26 patients in intensive care, the highest numbers since the county began reopening in late May.

Despite the rising level of infections, Bellone and Curran said they would not support closing Long Island schools.

"School buildings have not been a major vector of transmission in Nassau, and isolating children from teachers and classmates is detrimental to mental health, and educational and emotional growth," Curran said in a statement. "The virus is primarily spreading at social gatherings where little to no precautions are taken."

City schools on the brink

New York City schools will remain open at least through Wednesday as the city's weeklong positivity rate reached 2.74% — below the seven-day rolling average of 3% that would meet the threshold for a systemwide shutdown, Mayor Bill de Blasio said Tuesday.

"We know we are dealing with something really tough right now," de Blasio said at a daily news conference in which he announced a COVID-19 testing "blitz" across the region. "We know a second wave is bearing down on us."

The city reported its positivity rate Sunday was 3.2%, just a tick below Saturday's rate of 3.3%.

The nation's largest school system could close as early as Thursday — sending about 300,000 in-person students to a full-time virtual learning environment — if the seven-day positivity rate hits 3%.

Meanwhile, a pair of schools in Nassau's North Shore school district switched to remote learning Tuesday after two students tested positive for COVID-19 at Glenwood Landing Elementary and North Shore Middle School, both in Glen Head, according to district officials.

"As a reminder, we must remain vigilant now more than ever and commit to one another as a community that we will do all that we can to remain socially distant, practice healthy hand hygiene, and wear face coverings to help reduce the spread of COVID-19," wrote Superintendent Peter Giarrizzo.

The district has been reaching out to anyone who has been in contact with the three students and is working with the Nassau Department of Health. The district’s other schools remained open Tuesday.

Hospitals in the region continued to watch their numbers of coronavirus patients edge up as well.

Catholic Health Services on Tuesday said it had 60 hospitalized COVID-19 patients at the six hospitals it operates on Long Island.

CHS said it has seen the number of patients triple over the last two weeks, but "the overall number is still quite small, and nothing like what we saw in the spring," said Dr. Patrick O'Shaughnessy, chief clinical officer at CHS.

O'Shaughnessy added that only seven of the COVID-19 patients are in ICU.

"At the high point, 33% of our COVID patients were in ICU," he said. "We have treatments to offer, and while they're not magic bullets, we know a lot more now."

Good Samaritan Hospital Medical Center in West Islip has the most COVID-19 cases in the CHS system, with 20, O'Shaughnessy said.

North Shore University Hospital in Manhasset had the most cases in the system on Long Island, at 40, up from 36 the week prior.

"We also want to build confidence that they are complying with the State of New York’s regulations while maintaining a focus on well-being and health in our community," said Islip Town Supervisor Angie Carpenter.

Visitors to New York must test negative for the coronavirus within three days before arrival in the state. After three days of quarantine, visitors can take another test on the fourth day and, if they’re negative, be released from quarantine. Travelers can forgo testing and instead opt for a 14-day quarantine.