New York Gov. Andrew M. Cuomo, photographed during remarks at The Riverside Church in Manhattan on Sunday, said Monday that parents and teachers would need to agree to a new benchmark for schools to remain open as virus cases continue to rise. Credit: NYS Governors Office/Don Pollard

This story was reported by Robert Brodsky, Jesse Coburn, Bart Jones and David Reich-Hale. It was written by Jones.

The 3.5% level of new positives on Sunday was up from the previous day’s level of 2.7% for Nassau and Suffolk counties. A week ago, Long Island surpassed 3% for the first time since May, and it stayed above that figure for most of the week.

County and state government officials attributed the rise to people spending more time indoors as the weather turned cooler and some attended Halloween gatherings, weddings and other events, along with parties at people’s homes.

"COVID-19 is spreading in New York, and the increased number of cases is taking place throughout the state," Cuomo said Monday. "This is not an upstate or downstate issue — all New Yorkers, regardless of where they live, have cause for concern."

The statewide positivity level in test results from Sunday was 2.5% excluding "hot spots" with higher concentrations of cases, and 2.8% including the hot spots, which the state has said are oversampled. The level in those clusters was 4.19%.

Nassau County recorded 295 new confirmed cases of COVID-19 on Sunday, while Suffolk had 345. Those figures were far above the levels during the summer when each county regularly recorded well below 100 new cases each day.

The number of people hospitalized with COVID-19 increased by 123, for a total of 1,968 patients. Twenty-five people died in the state on Sunday of coronavirus-related causes.

While Nassau County Executive Laura Curran on Monday said she was pleased to see the county’s infection rate dip from 3% on Friday to 2.5% on Saturday, she warned that large gatherings on Thanksgiving could send the numbers back in the wrong direction. 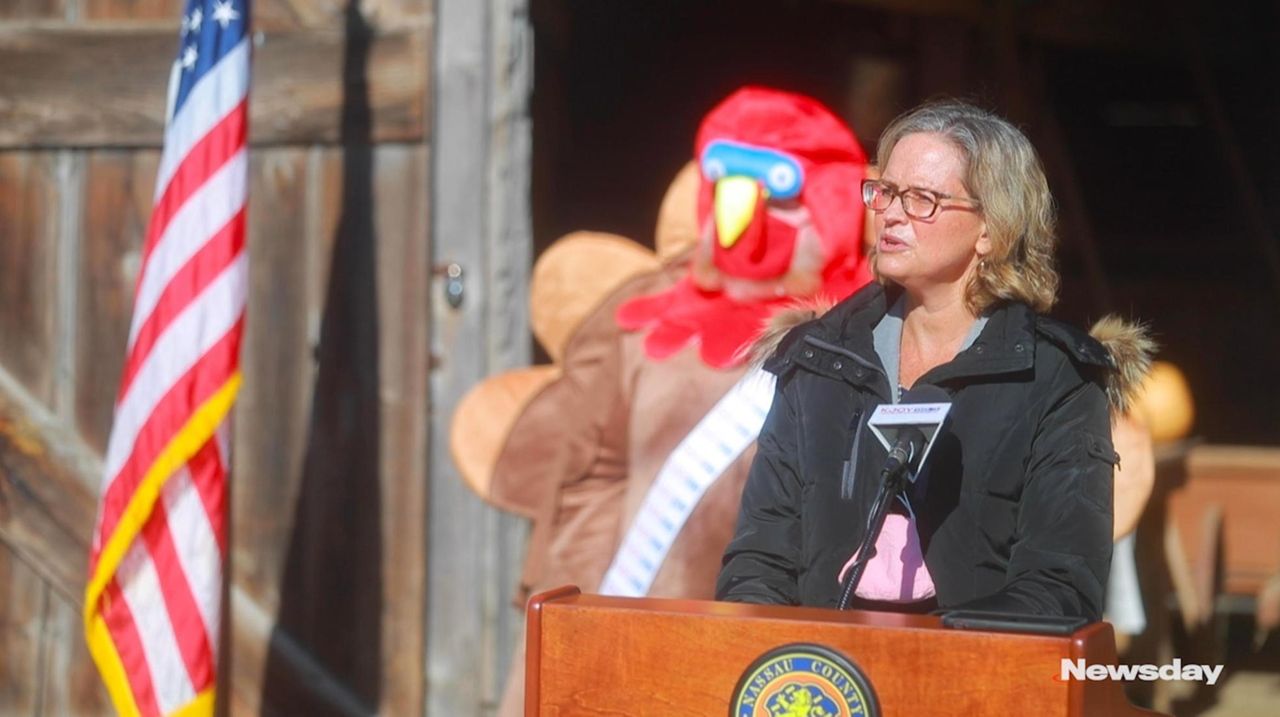 Curran: COVID numbers dip under 3% positivity rate On Monday, Nassau County Executive Laura Curran said she was happy to see the positivity rate dip below 3% after a few days above it. Credit: Newsday / Raychel Brightman

"We can’t get too excited or depressed about any one day's numbers," Curran said at Old Bethpage Village Restoration. "We need to see what the trend is as we go forward."

The Nassau County Correctional Center in East Meadow has suspended jail visits due to the recent increase in coronavirus cases, the Nassau Sheriff's said in an announcement posted on its website Sunday. The Suffolk's Sheriff's Office said visits have not been suspended at jails in that county, though officials are weighing whether to do so.

Cuomo on Monday continued to press for New York City to reexamine its policy to shut down schools if the city’s COVID-19 test levels hit 3%, though he said parents and teachers would have to buy in to any changes.

"At three percent, the teachers, the parents, expect and agreed that the schools would close. What I'm saying is we've learned a lot since then and schools are actually the safe place," Cuomo said Monday, during an appearance on MSNBC’s "Morning Joe."

Cuomo emphasized that parents and teachers would have to agree to a new benchmark, and for now he does not plan to impose one. "There is no fiat here."

In Riverhead, Phillips Avenue Elementary School will be closed for two weeks because a teacher tested positive for COVID-19 and had close contact with numerous staff members, school officials said.

Raymond J. Lockhart Elementary School in Massapequa and Weldon E. Howitt Middle School in Farmingdale were closed to in-person instruction on Monday after a staffer at each school tested positive for the virus, officials said.

East Meadow High School will be closed for in-person instruction on Tuesday because two students tested positive for the virus, officials said.

The state's COVID-19 Report Card showed a total 1,807 virus positives reported by Long Island schools as of Monday and since September 8, with 1,325 students and 482 teachers and staff contracting the virus. The statewide total for all schools had reached 9,309 positives in the same period.

Cuomo also defended his decision to have an independent panel review any FDA approvals of a COVID-19 vaccine, and alleged that President Donald Trump's federal government is unprepared to handle a mass vaccination program.

"If people don't trust the vaccine they're not going to take the vaccine, it's all for naught," Cuomo said.

Stop & Shop on Monday said its pharmacies will administer COVID-19 vaccines once one is approved for use in the United States.

The supermarket chain has 51 stores on Long Island, 30 of which have pharmacies. Stop & Shop operates more than 250 pharmacies throughout the Northeast, including in New York, New Jersey and Connecticut.

The vaccine would be administered to customers at no cost, Stop & Shop said in a statement.

The vaccine will be distributed through a partnership with the Department of Health & Human Services. The HHS said last week that pharmacy chains CVS, Rite Aid and Walgreens, all with a presence on Long Island, have also agreed to distribute the vaccine once it’s made available.

De Blasio: Schools will be open at least until TuesdayNew York City Mayor Bill de Blasio said the city's latest coronavirus positivity rate of 2.77% would keep city schools open, but reiterated they would be shuttered if the rate rose to 3%.