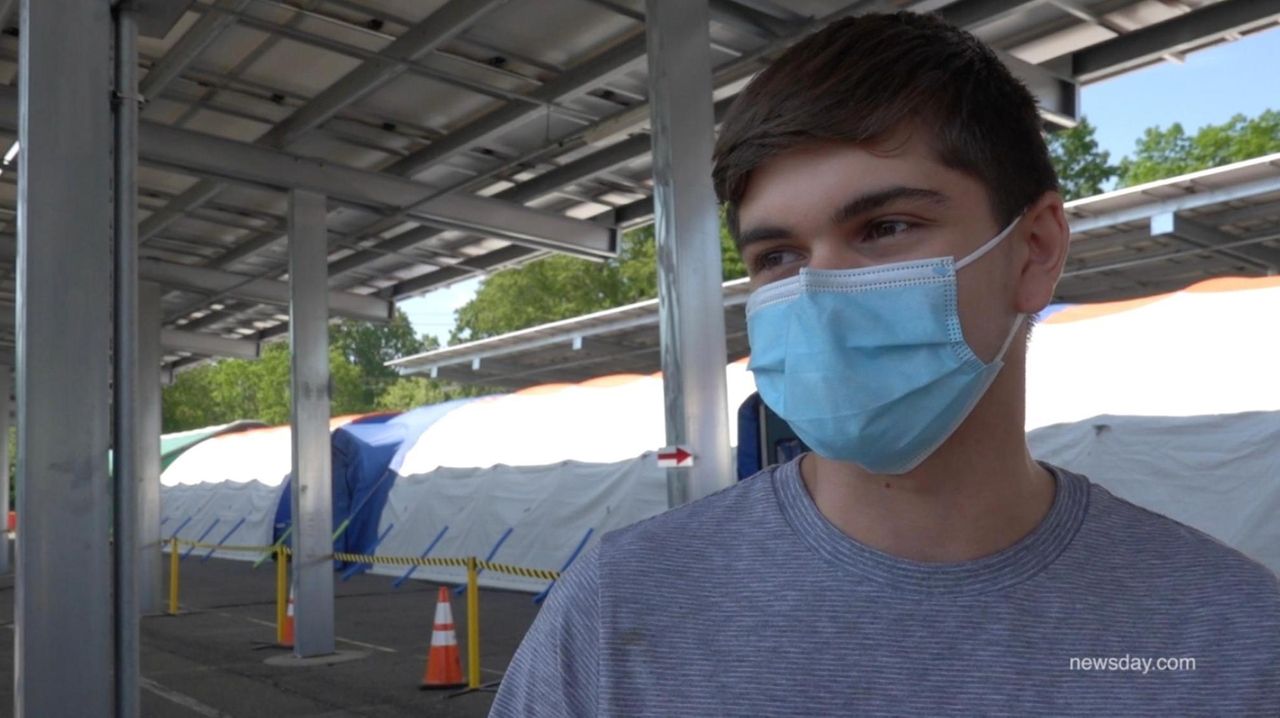 At a COVID-19 vaccination site in Hauppauge on Thursday, Long Islanders talked about whether or not they think incentives will work when trying to get people to take the vaccine. Credit: Deborah Egan-Chin

Free drinks, french fries, park passes, tickets to baseball games, a college scholarship and even a chance to win $5 million with a scratch-off lottery ticket.

Officials across New York have tried a variety of incentives to boost the number of people getting inoculated against COVID-19 as the pace of vaccinations slowed in recent weeks.

"Whatever gets more people to come here and get the vaccine," said 24-year old Eric Blechschmidt of Commack, who was waiting for his second dose at the Suffolk County site outside the H. Lee Dennison Building in Hauppauge. "If it works, it works."

Where people once spent hours scouring the internet in a frustrating search for vaccination appointments, now they can walk into locations all over Long Island and the state and receive the shot.

That’s because many people eager to get the vaccine have already done so, experts said, leaving those who are reluctant or may face logistical hurdles. Others have said they won't get vaccinated.

The jury is out on whether the freebies are getting more people to offer their arms.

Jocelyn Jones of Ronkonkoma said she was excited to receive her second dose of the COVID-19 vaccine, even though a fear of needles made her a little nervous.

"We know from behavioral medicine that people respond to incentives, which are forms of rewards," Halkitis said. "The history of incentives in health is vast and varied, and it will be an extremely important element in helping to move those who are still unsure about whether or not they want to be vaccinated."

According to the U.S. Centers for Disease Control and Prevention, almost 40% of the nation’s population has been fully vaccinated against COVID-19. In New York, the percentage of fully vaccinated residents is slightly higher, at 44%. About 52% have received at least one dose.

On Wednesday, Gov. Andrew M. Cuomo announced that young people between the ages of 12 and 17 who receive their first dose of the COVID-19 vaccine from May 27 through July 7 can enter a lottery for a four-year scholarship to any public college or university in the state. Ten scholarships will be given away every week.

Suffolk County Executive Steve Bellone’s office has worked on several incentive programs, including free Lyft rides to for seniors and veterans and giving a ticket for one free drink at participating breweries, wineries or distilleries for people age 21 and over who get vaccinated at county-operated sites by May 31.

Bellone noted that about 65% of the population of Suffolk County over age 18 has received at least one dose.

"But that’s still 10% to 20% below where we need to be," Bellone said. "Incentives are part of a larger strategy here which includes a messaging campaign to get people the facts. The people who are a little hesitant not only get the message but a little nudge," he added.

Bellone said removing obstacles for people, such as providing transportation to vaccination sites, is key to a successful campaign.

It was the advice of her friends and relatives, not incentives, that persuaded 17-year-old Ruth Diaz of Brentwood to get her first dose last week.

"I know a few people in my school who have gotten it and they seem OK," said Diaz, who went to the Hauppauge site with her mother. "I was thinking about it for a while … at first I was nervous because we don’t really know much about it because it's still new."

More than 1,300 teens were vaccinated during a four-day high school vaccination event at Nassau Community College, organized by County Executive Laura Curran and Northwell Health. As part of the program, student vaccine ambassadors were trained by the Nassau County Health Department.

Students who were vaccinated were promised six hours of community service credit.

In Nassau, more than 73% of people 18 and over have received at least one dose of the vaccine.

"There is no doubt that the rate is slowing," Curran said in a statement. "While being able to resume normal life is an incentive in itself, hopefully some of these extra incentives can help to motivate even more people to roll up their sleeve."

"I think it’s a wonderful incentive for people to come and enjoy a glass of wine and show they have been vaccinated," he said. "It kind of brings everything full circle after going through this pandemic."

Joseph Vetri, 18, of Center Moriches, said the people he knows are split about the vaccine.

"A lot of people won’t get it because they feel strongly about the subject," said Vetri, who was waiting to get his second dose in Hauppauge. "They are afraid of it, they don’t fully understand it, or it doesn’t matter to them."

What does Vetri think will convince them?

Analysis: Vaccination rates on LI vary drastically by ZIP codeIn ZIP codes where most residents are Black or Latino, 41.9% of residents have received at least one dose of vaccine, while in ZIP codes where most residents are not Black and Latino, 54.9% have, the Newsday analysis found. LI leading NY in COVID-19 vaccinations; state giving shots in parksGov. Cuomo touted "49 straight days of decline" in virus positivity, but said vaccination levels have dropped off. He announced the opening of state park sites for shots, with an incentive of free passes this week. See the percentage of LIers who are fully vaccinatedCheck the latest numbers on how coronavirus has spread in your community.