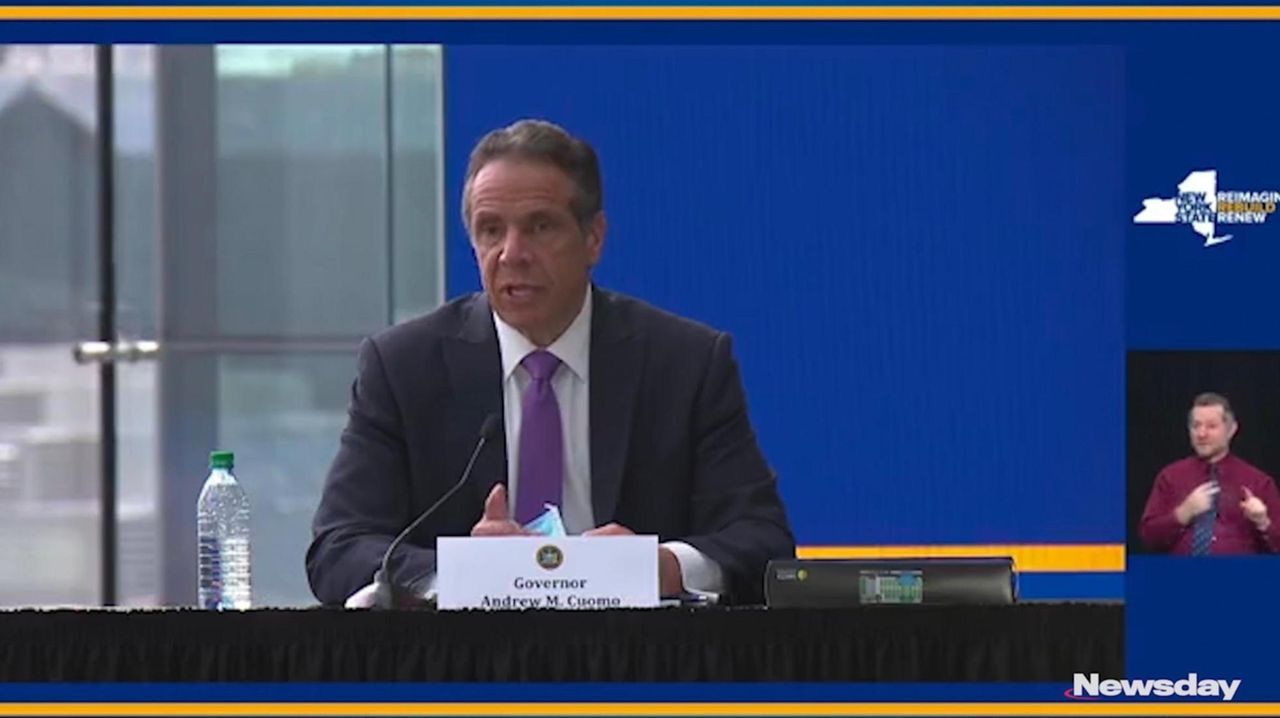 Gov. Andrew M. Cuomo said that if the Pfizer vaccine is approved by the federal government Wednesday, it would be available to New Yorkers ages 12 and up on Thursday. Credit: NY Governor's Office

The U.S. Food and Drug Administration expanded the emergency use authorization of the Pfizer-BioNTech vaccine on Monday to include people ages 12 to 15.

The Centers for Disease Control’s vaccine advisory committee is to meet Wednesday and may also approve the emergency use, clearing the way for states to start administering it.

If the CDC approves it, Dr. Howard Zucker, head of the state Department of Health, will meet with the state’s Clinical Advisory Task Force and make a final recommendation, Cuomo said in a statement.

That "means we could have full authorization for vaccinations to begin for 12- to 15-year-olds here in New York as early as Thursday," Cuomo said.

If the federal government approves it, "I would expect the state would approve it," Cuomo said later Tuesday at a media briefing.

The Pfizer vaccine is the first in the United States to obtain FDA approval for children 12 to 15 years old. Moderna is expected to seek similar approval in coming weeks.

Asked by a reporter if the state will mandate that children receive the COVID-19 vaccine to be able to attend school — as is the case now with other vaccines — Cuomo said the situation is not yet clear.

At the moment, mandating it is not possible because the vaccines have only emergency approval from the FDA and not full approval, he said.

Getting the regular approval may take months and not come in time for the start of school in September, he said.

But "if there was a federal approval, it is going to be a legitimate topic of discussion, I can tell you that," he said, referring to mandating the vaccine.

He said he went through a controversy a couple years ago with some parents who didn't want their children to receive the vaccine for measles.

"I understand the opposition to vaccines by parents," Cuomo said. "I don’t see it backed up by science or data, and I’m not saying that we’re considering doing it, but it would be a topic of discussion if you had the federal approval."

The seven-day average of positive results in tests Monday was 1.34% statewide, the lowest figure since Oct. 24, state data showed.

The number of new confirmed cases was 77 in Nassau County, 104 in Suffolk County, and 557 in New York City.

Across the state, 32 people died of COVID-19-related causes on Monday, including two in Suffolk. Nassau had no virus-related fatalities.

Starting Thursday, New York City will offer drive-through vaccines at Citi Field, open to anyone including Long Islanders. That is in addition to the vaccine site at the stadium itself, Mayor Bill de Blasio said.

When the Citi Field vaccination site first opened, it was limited to Queens residents and select other categories.

"We've already given 100,000 shots at Citi Field; it’s been amazing — absolutely amazing," de Blasio said. "And now, we're going to make it easy for folks to just come on over, get a shot, and keep moving."

1:50
Can you ask someone if they're vaccinated without sounding judgmental?
Encouraging COVID shots can be tricky for employers
Suffolk sees lowest number of COVID-19 positives since pandemic's start
Biden pushes shots for young adults as variant concern grows
LI unemployment rate drops below 5%
1:48
Struggling landlords: Surviving the ban on evictions
Didn’t find what you were looking for?